The Binding of my Sunshine Rooster Rug

Finally, I'm getting started on binding my rug. It's not that it's difficult but it's not a job that I like to do as much as hooking, especially in the summer. It took me a while to assemble everything that I needed to start and my 10 minute is up. I'll include some photos just t prove that it's started. I was debating wether I should try to do it like Gene Shepherd and add the binding along with the whipping and decided that I may try his method on my smaller Childhood Memories rug after I'm done with my Rooster rug.

I have in mind that I might try to design an Aquarius rug for my husband as he's an aquarian but my design is not yet on paper. I need to research it first when I get the time. I thought that he might enjoy something to keep his toes warm. His feet are always cold in the winter.
My little bull calf is now drinking 2 bottles of milk and per feeding and doing real well after two weeks from hell, but my small twin is still not doing well. I had to scrub his butts this afternoon. Yes you read it right. I can't bear seeing it dirty when it's too weak to stand. He was just laying there in his own dodo, poor little thing. He actually got up after I cleaned it up and started drinking his medicine from the bottle but only drank about three quarter of the bottle which is better than forced fed. JB 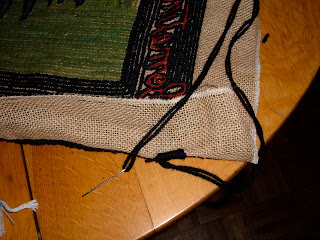 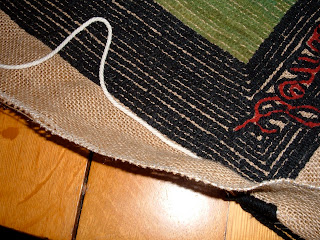