When a blogger friend suggested that she imagined my kitchen  smelling of something nice with cinnamon  baking and maybe some apple cider I think, it kind of gave me an idea about what I could make that wouldn't cost anything to add to the garland on my bannister.

I sadly have no such aroma in my kitchen at the moment. Smells more like Nachos, lol... I wish it smelled of fresh baking though.

I found a jar of cinnamon sticks and a jar of star anise in my pantry and then I remember that I had some dried  apple and lemon slices tucked away in my buffet.

I used some tiny  elastic bands to hold the cinnamon sticks together but I needed some ribbon and I couldn't find anything suitable. I found a small piece of left over burlap backing from my rug hooking supplies to tie the ornaments to the garland. I pulled some strands from the jute.
I borrowed my husband's carpenter glue, (he's not using it any way shhhhh) to attach the star anise on the bow to kind of hide the elastic band. I used some ornament hooks that I twisted in a "S" shape to hook them to the garland. 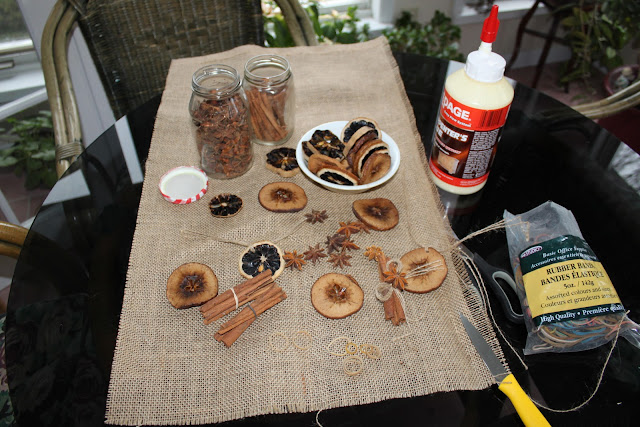 I also found a short set of clear lights last night that I thought  I had given away to goodwill. Getting the lights on after the garland is decorated is not the best idea, lol.... Can you tell that it's my first year to decorate the bannister? 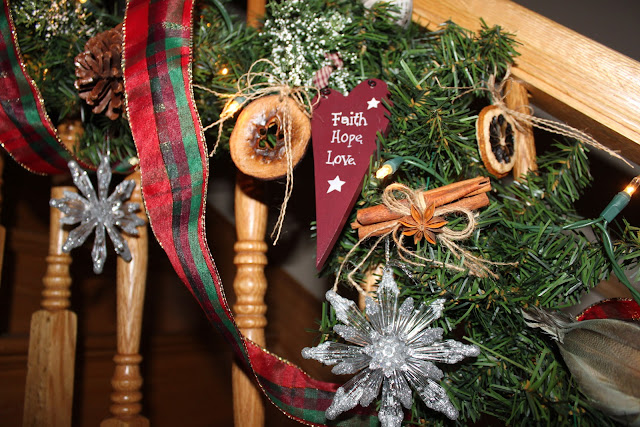 I found some fir tree picks and added them on here and there and this red heart that someone gave us for our tree last year when the triplet calves were born. We had named them Faith, Hope and Love. Now, I'm not sure I like the plastic snowflakes on the garland. I'm new at this. 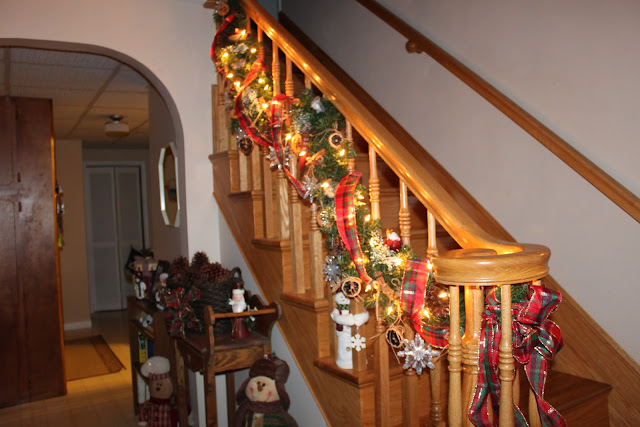 This is not a a very good shot. I tried a night shot setting on my camera. The only lights on in the hall were the one on the garland
I need to buy a tripod to hold the camera steady with this shot because the shutter speed is slower on that setting.  ( maybe santa is reading my blog)  lol...
I don't dare tie anything on the rail for safety reason for my husband.

I had my eye appointment today and needed a new pair of glasses. Since I broke my frame last week and the optometrist lend me a new frame which I was supposed to return, but since I got the new frame I can see so much better as the frame holds the lenses in the perfect place on my nose.

In four years my eye sight has changed just enough to have a new prescription but I can still use these for the barn work and use the new pair for dress up or computer. $509.  My senior insurance only pays $100. He did gave me a discount though. It might take a couple of weeks before I get them because I'm having some no glare and anti scratch added on the lenses.

It's supposed to warm up by Monday and I plan to wash my very dirty windows on the south east side of the house. The sun is low this time of year and dirt really shows.

Thanks for visiting again and a warm welcome to all my new followers, seen and unseen. I appreciate your comments.
JB