WHAT A MORNING IT'S BEEN!

We had a thunderstorm early this morning and I hadn't slept well. I had spasms in my back and had to put the Magic Bag on it to relax the spasms in my  muscles. I could hear the rain and then just as I was falling asleep again it started to thunder and it sounded close. I got out of bed to unplug my computer and turn the switch bar off the other and went back to bed. I just laid there in bed feeling tired until 7:30 am.

I got dress and skipped breakfast for now and got going. I was half an hour late getting out and  went to feed the birds before  going to the barn and when I got there the cats were waiting at the door for me as usual, to feed them. I gave grain to Rosebud and I was going to the other side of the barn to get milk for her when I heard  a loud painful moan and high pitch cry from the cow that was put in the calving pen yesterday.

There was no indication that she was going to calve so soon. She  was temporarily put in that pen while they moves some cows and heifers in the pasture yesterday and she was supposed to go in the back this morning.  Normally I can tell when they are about to calve, but this one showed no sign.

I almost forgot to mention that someone had forgotten to close the little gate in the barn and the cows got into everything and made a huge mess all over the floor. They tore the big round bale of bedding hay by the door and knocked things off the wall and hooks and pooped all over the place, ate the little bit of fish and chicken dry cat food that was left in their bowl, ate all Rosebud grain.

All this could have been avoided if someone would only remember the importance of closing the little gate when they use it. Sometimes they plan to return through that gate and change their mind and keep going and forget to close the damed gate.

Back to my poor mama cow. She was screaming like I never heard a calving cow scream. It wasn't a mooo. She was laying down and wasn't letting up. I saw that the water sac wasn't broken and I could see the head and the front feet in the sack. I hate going in the pen with the cows but I did. First I put a little bit of hay down as she had pooped all over the place right where the calf was coming out. Then I tore the membrane from the calf face and called my son. He's never in a hurry.

All this time the cow is screaming like a cow in deep pain.  I called my husband as I know that my son will drink his coffee before he comes. I needed help right now as the calf wasn't moving at all. I stared to pull and since it was a small calf she came out half way and the stupid cow got up whipping me around and I had to let the calf go.

She backed herself in the corner and I couldn't pull the calf out but it was hanging upside down and still not moving. Fortunately I could go outside the pen and stick my arm in there and pull the mucus and bubbles that were draining out of her mouth and nostrils. I was so glad that she was hanging upside down as liquid was draining the very best this way. Normally they lift the calf upside  down on the cow's back to drain the mucus. But at this point the calf still wasn't moving it's head. I thought that it was dead.

Finally there's a sign of the little head faintly moving. A good sign. Then a little more. The calf is alive. My husband arrive at this point and asked me to put some grain in the manger to make the cow go forward so I can lock her head in the locking gate and he tugged on the calf and it falls down. Then my husband left to finish his breakfast and I have to put fresh hay in the pen. At this point the mother is busy licking her little baby. 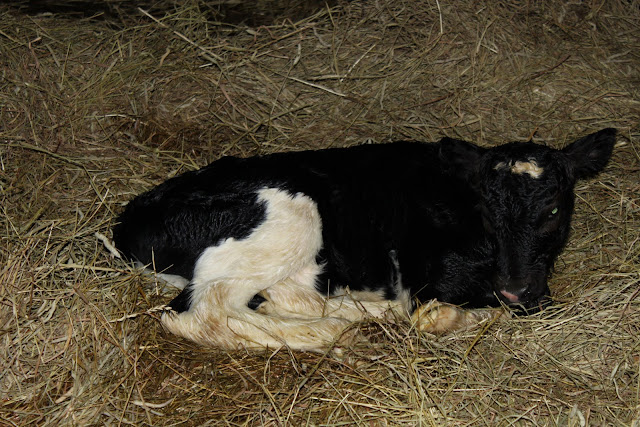 I just wish that I had someone follow me to the barn with a video sometimes for some interesting footage, lol...
Here she is the little muffin. At first she couldn't stand up at all. 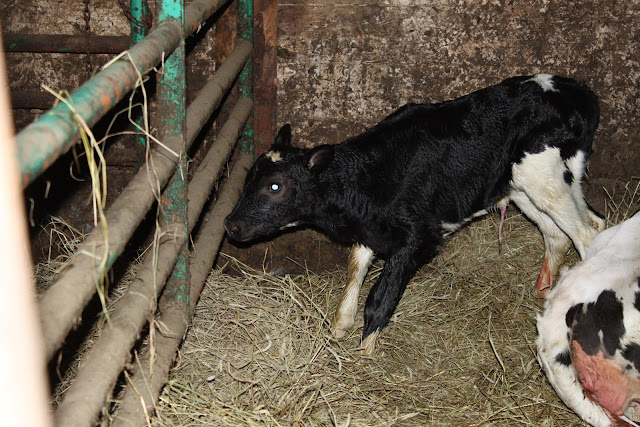 There she is about half and hour later.  Sorry about the mother's rear. She was too tired to get up. 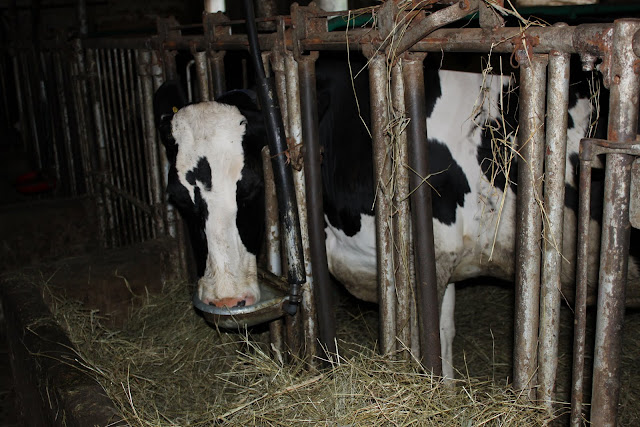 There's the mama having a drink after the traumatic experience of giving birth. 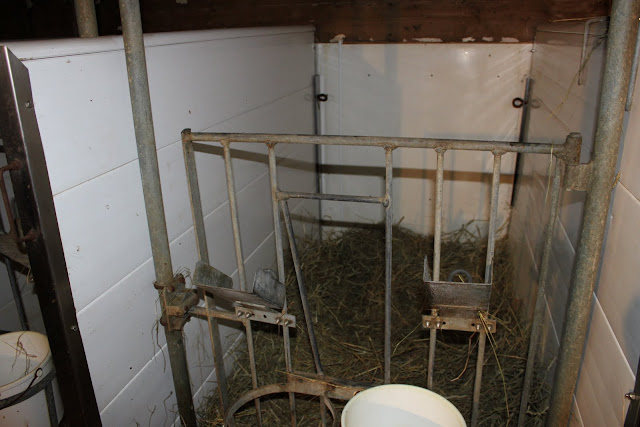 This is the pen where the new baby will go. 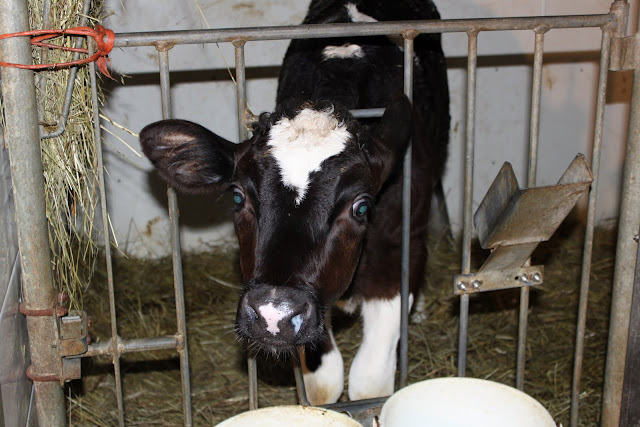 This is Rosebud, she has a little pink rosette so I called her Rosebud. She's all alone in the nursery and has a larger pen.  She's quite spunky and kicks her heels a lot. 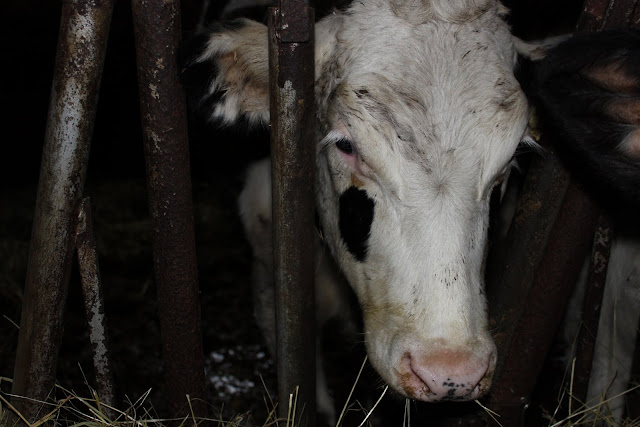 This dirty girl is Football. It looks like she just came from the muddy football field. She getting big.
Thanks for dropping by my blog and leaving a comment.  JB
Posted by Julia at 3:33 PM 11 comments