I'VE BEEN WORKING OUTSIDE IN THE HEAT A LITTLE AT A TIME.

I'm sorry I've been slow at posting but by the time I come in from the garden, I'm too tired to post.
I usually work in the yard in the late morning or after it cools down in the late afternoon Spring came early this year but soon the temperature started rising and we are having August heat in June and we have been in a drought. The ground is so dry, it takes longer to dig out weeds and watering takes so much time. Thank goodness it's raining a little.  That means I can spend some time on the computer and finally do a post. It didn't rain much but it cooled things down. Maybe we will get some more showers tomorrow.

I really don't have much new stuff to show you except a few things.    This year,  my flowers and bushes have suffered from a lack of rain and higher heat than normal. I've lost a hydrangea bush and some of my rose bushes are partially dead. Today,  I noticed my hostas by the gazebo was getting brown leaves from lack of water and shade. It was starting to sprinkle so I didn't have time to get my camera to show you the damage.

I've assembled some raised bed that I lined with landscape fabric and I planted some tomatoes, peppers, and carrots in them. So far the veggies are doing well. I put the raised beds were put right on top of the grass without digging. I put some small patio blocks in between to give more space between the tomato plants as they take up a lot of room and to cut down on mowing in between. My first idea was to dig out the sod around the perimeter and put some flat cement blocks to make it easy to mow around but this would involve cutting a lot of cement block. It might be a project for later. 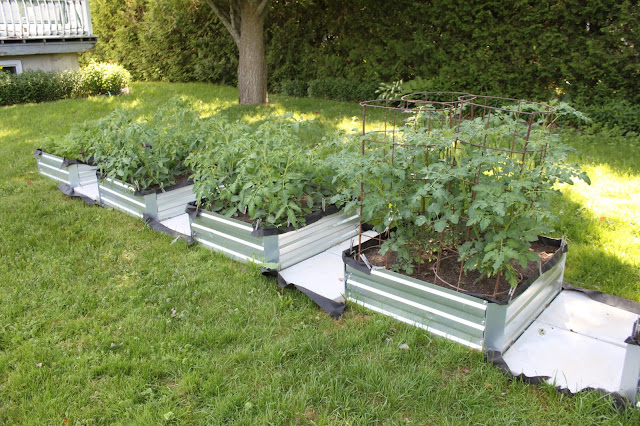 An earlier photo of the cloches. I used some plastic cloches I had purchased at the Dollar Store last year to protect the transplants from the cold during the night but in the day it would get very hot and some of the leaves tips got scorched but they seem to have bounced right back. 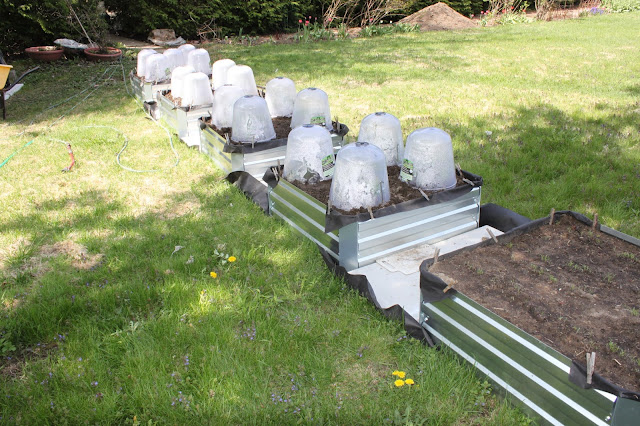 My next project was mulching all the dead debris from my daylily flower bed.  I had put all the debris in bags this spring and saved it to use as mulch.  I use my mulcher lawn mower to mulch the debris in my gazebo. It made a lot of dust but it was worth it. I got 21 full feed bags packed with mulch. I knew I would not have enough so I bought some premium straw to mulch other parts of the gardens. I'm not done but I'm making some progress.  One word of caution when mulching dry debris is to be very careful not to catch the dry matter on fire as the heat coming from the carburetor is enough to start a fire. I always have a water hose nearby ready just in case. 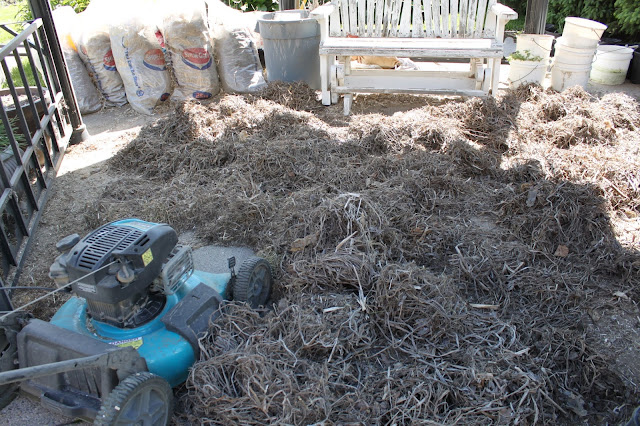 Daylily debris before mulching. This is only a few bags worth.  I had about 30 bags saved in all but after mulching, I got 21 bags full bags. 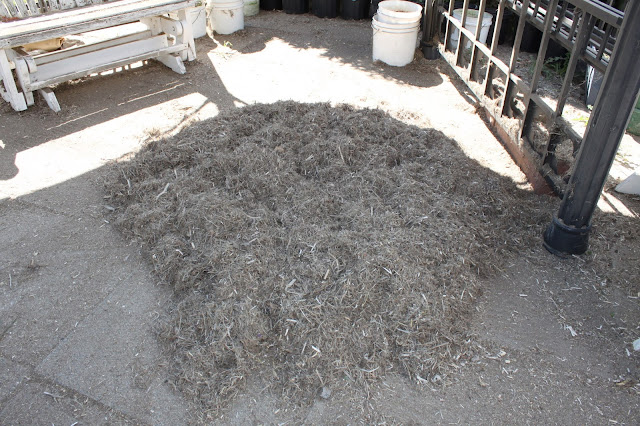 After mulching the debris above, this is how much I  got from it. 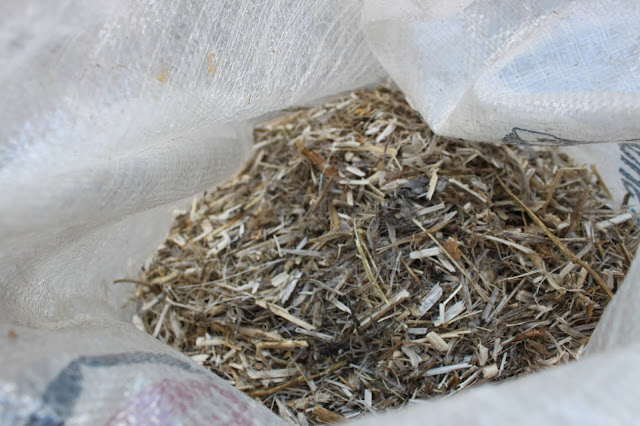 Up close, this is what it looks like after mulching in the bag


My next experiment has been to try to root a sweet potato to make slips to plant. I started late but at least, I'm getting to know how to do it for next year. To have sweet potato tubers, you need to plant slips with roots. It takes a little longer than a month for the slips to grow big enough to plant in the garden.  Next year, I'll start them earlier. One end only made roots and the other end made roots and slips. 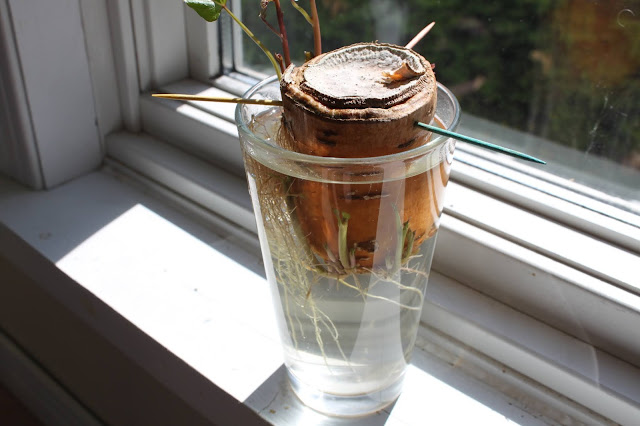 My sweet potato rooting experiment. You can see the slips growing on the sides and lots of roots after a little more than a month.  Next year, I'll start them earlier. 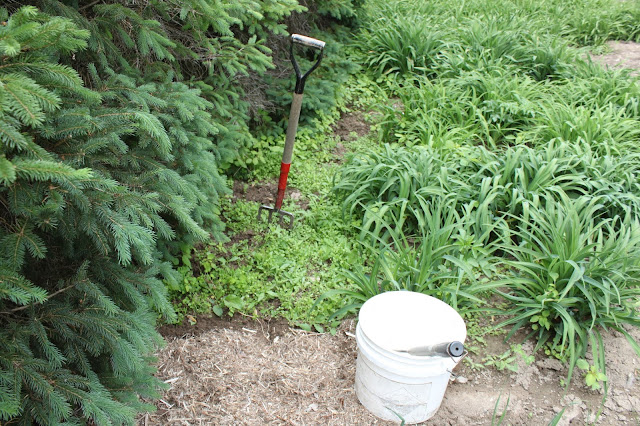 Weeds in my daylily bed because I lost all my mulch last year. 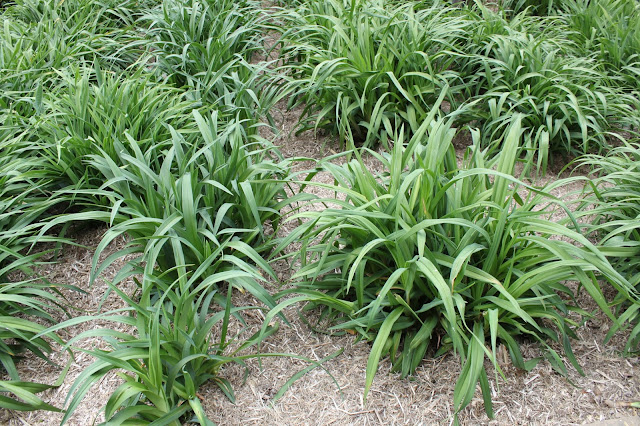 The daylily bed mulched after weeding and mulching.

Thanks for visiting and leaving a comment. I hope that your gardens are doing well. Stay safe and happy.
Posted by Julia at 8:29 PM 13 comments