BREATHING A SIGH OF RELIEF TODAY


Yesterday started ordinary but before too long it wasn't an ordinary day. We got up early to milk the cows and I went to feed the calves. After breakfast I normally check my emails and my daughter Jackie, has sent me an email that there was a shooting in Ottawa on Parliament Hill.  One young soldier guarding the War Memorial Monument was shot and killed.

My mind went from tired to immediate alert. I wrote an email to my Daughter Christine in Ottawa and she replied that luckily, she was working from home as opposed to going into the office that day, the positive side of working with computers. Otherwise she would have been in a long line of stagnant traffic and her car would have been searched as the area was on lockdown.

My brother is an RCMP who works on Protecting the Parliament and embassies and I knew he would be there. It was a drama that I will not describe other than there was a lot of shooting inside the Parliament building and he was there protecting the country. He's married with a lovely wife and two kids.

Ironically, yesterday was his day off and he was called on emergency to work. He went with no breakfast in his tummy and the whole Parliament Hill went on lockdown all day until 8:00 pm last night. They were searching for one or two more suspects but in the end the police decided that there was only one shooter.

The killer was himself killed by the Sargent at Arm inside the Parliament building, three other people were wounded and taken to the hospital.

My brother was back at home today, safe and sound and is sleeping in. Everyone is relieved to have him back home with his family. His wife's voice was trembling last evening as she talked to me on the phone, saying how it had been for her waiting all day to know that he was safe and the constant speculations on TV was so confusing. It was difficult knowing what was true and what was speculations, not knowing when it would end.

Today the Parliament is again opened for business but closed to the public and one section in the area is still under blockade. Thanks to all our brave men and women who risk their lives to keep our citizens safe. I salute them all and I'm proud of my little brother.
My daughter Christine went to work as usual today.

I finally decided to put my grandfather's picture on a pattern for a rug. I used a photo of him and had to trace with black ink to see the outline better. It will not be a true drawing of him but a representation as I'm using a child projector to trace the outline and can only project one little part of the whole picture. If I move the projector on another section, everything is out of wack. This is the best I could do. 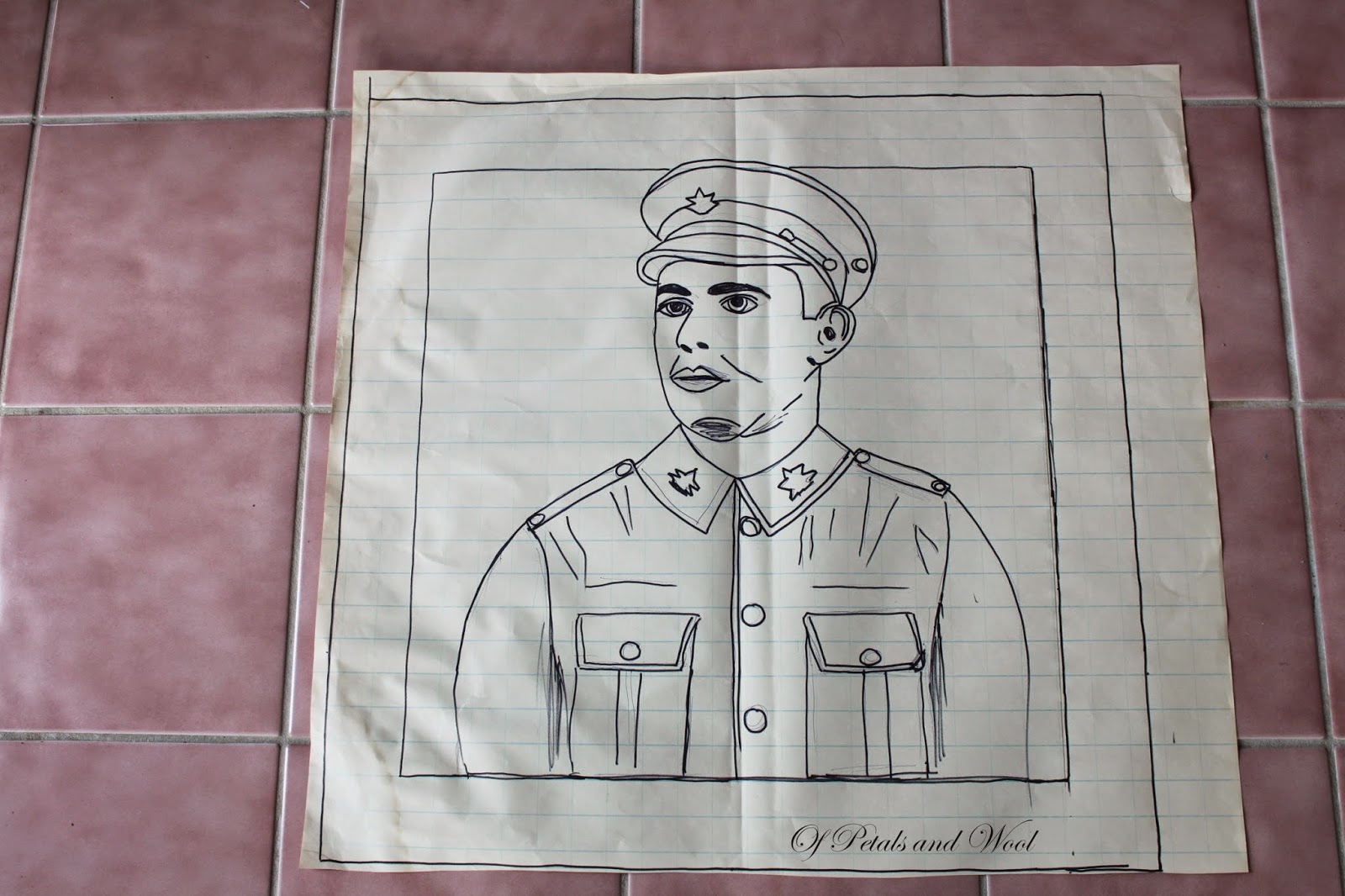 I need to work on the lips some more. The sketch outlined with a sharpie so the lines will be visible through the backing.  It's 24 x 24 inches.  My grandfather  was very handsome with his blue eyes, in his soldier uniform. I'm not sure what year that photo was taken and I would like to know. 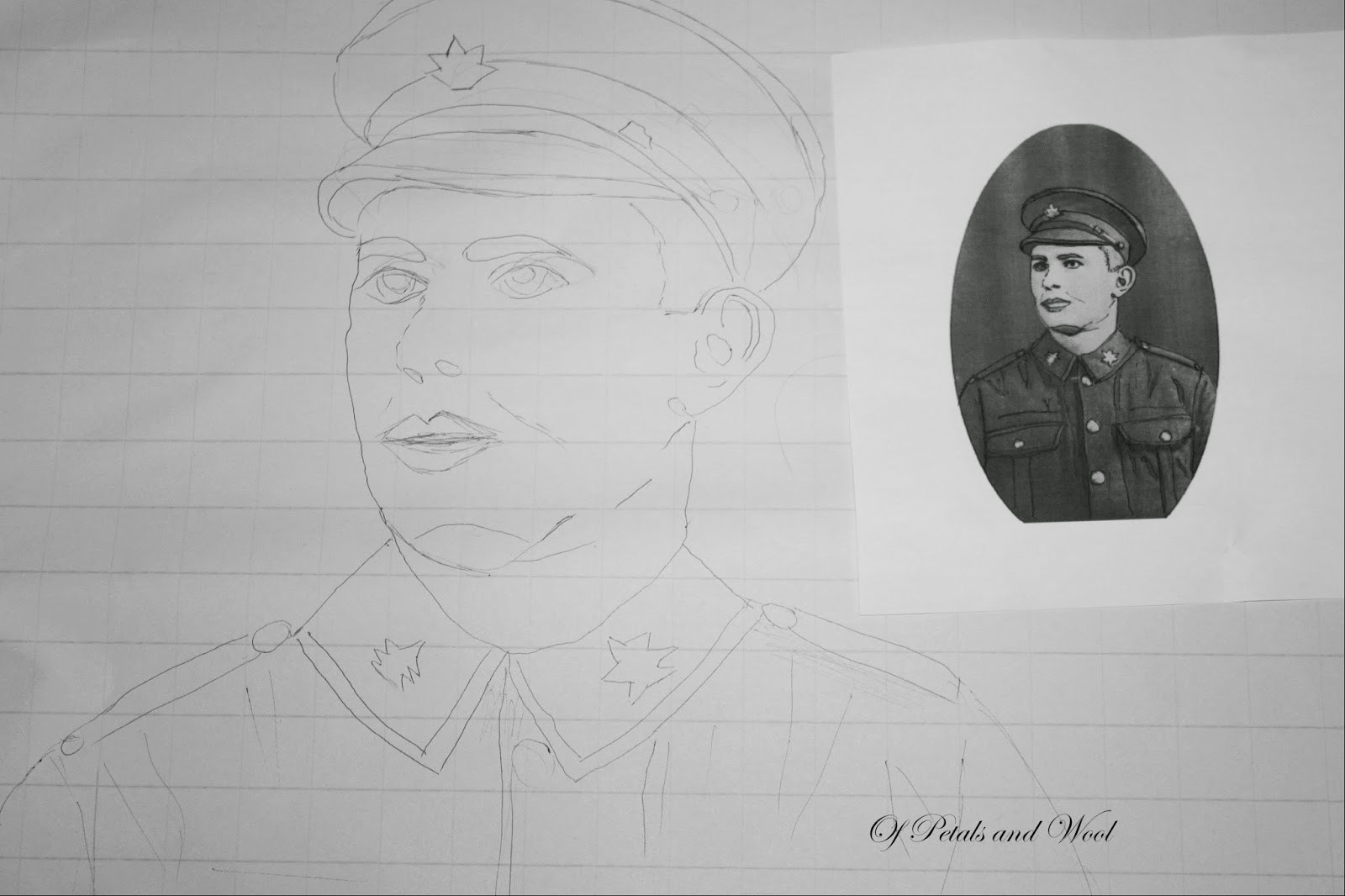 The  sketch is yet to be transferred to the backing  and I don't have all the proper dye to work with so it will be some time yet before I proceed to hooking. I have to order some more dye from Cushing Company in the states and then dye my wool. At least it's a beginning.