THE FARM GREMLINS HAVE MOVED TO MY HOUSE

This morning my husband did the milking and we were both a bit later than usual as we have been  tired because we went to bed at 11:00 PM last night. He was supposed to come get the mother cow to milk her so I could feed her calf but he was rushing to wash the system before the plumber came to replace the water pressure tank and he totally forgot. He had to wait till the milking washing cycle system was finished before he could milk her in the steel milk can but by this time the plumber had turned the water off and I had no way of warming the milk so I had to go home to get a hot pail of water. The big steel milk can is cold and  cools off the milk rapidly.  See what I mean, the gremlins are here. This meant that I had to return to the barn to feed the new calf after having breakfast.

The water bowls and water troughs have been getting plugged on and off lately at the barn and especially lately and we have found pieces of diaphragm from the pressure tank and pieces of lining that plugs up the  pressure nozzles and water bowls so today we had a new pressure tank installed. It holds 180 gallons of water at the cost of $1100. 00 and the new water pump  on the 7th of November  was over $1200. 00. We had the water tested twice and there is still some bacteria that is present but
not harmful to human so we still have to get the well shocked another time and one more test. We believe the bacteria  came from the old tank when the submergible pump was replaced. There was some black in the water if you remember.

When I turned the Halogen light on this morning, it burnt out and I had to work in dim light. I say Gremlins are at work...

This morning when I opened the cover on the calf feed bin I saw my first mouse of the season. I couldn't believe it with all those cats in there. They were sniffing under the bin and for a good reason. I hope they catch it or I'll starve them till they do the work they are supposed to do.


When I returned home to make a beef pot pie, as I was getting a small Corning ware casserole dish out from the bottom of the cupboard to store the rest of the beef pie filling in and I accidentally knocked two identical small Corning casserole dish off the shelf and they shattered on the floor. I got those as wedding presents in 1966. I like them because they are small enough for two people. I still have one left thank goodness.  I think that the gremlins did it...  Oh well... it's time to think of downsizing any way. lol...   I  made my own Cream of Mushroom soup from scratch to put in the pie filling instead of the gravy. It was real good. I used the pie crust  trimmings to make a small one for my son. At least that project went very well. The Gremlins are not having any... 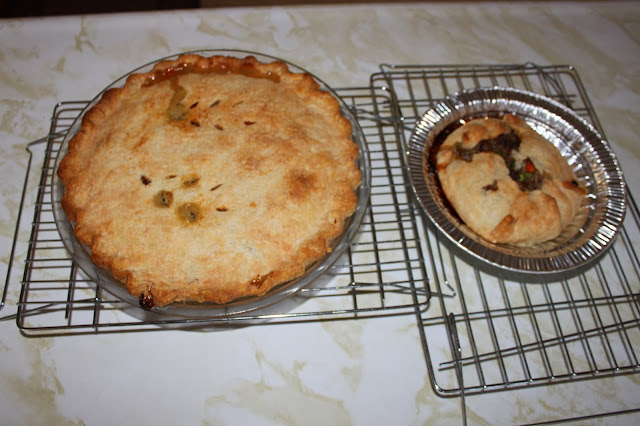 This afternoon, I went to work on weed cutting and my new weed eater was giving me problem as I was cutting tall grass I ran into some hidden metal wires and it cut the small blue cords and my husband had to take the spool apart. It has two cords inside the spool instead of one and he removed one cord and I liked it better. After that each time it hit something hidden in the grass, I knew what to do.  The damed Gremlins were at my weed eater too.

I was doing real well when I got a call from my son that he had found a new heifer calf born outside.
I dropped everything and went over to look after her. The mother was due on the 29th of November.

I have absolutely no place for another calf and had to remove the one that was in the big pen and tie it to a post right in my work path. I see a Gremlin pattern... Oh I almost forgot, that calf I had to tie to a post escaped from the pen the day before and went missing for a while.

When George came to get the mother, he left the big pen gate wide open and then he also left the big gate open. The calf gingerly came out in search of his mother and he ran over to the first cow he saw in the dry cow pen, out of site.
It was a warm sunny afternoon and I opened the outside door to let fresh air in and noticed one of the calf had knocked his feed pail on the floor and I went to tie it down and it's then that I noticed the calf missing. I thought that he had escaped outside. My heart sank down to my knees.

I looked everywhere and I finally found him hiding behind the dry cows. He laid in some cow patty and I had to wash under his belly and dip his navel again.
My husband has had so much on his mind lately because there's so much going on  that he forgets little important things like closing gates. Or maybe it was the Gremlins again...

At this rate, I'll never be able to tell you about my weekend stories. It's a longer story and if I don't write it down, I'll sure forget it as there are always some more stories that crops up.

I don't know what to do to keep my stories short. I do apologize.  Maybe just pretend you're reading a book.

Thanks for stopping by. I really appreciate your comments.
JB