FROM DISASTER TO EDIBLE

I've been craving bread so much lately but most of the bought bread has some soy by-product which I'm not supposed to have because of the nasty C.  I decided to try an old sweet bread recipe that I've made many time before and it was always good.

I dug out all the ingredients and measured carefully everything and started to scald the milk on the stove. I put my yeast to proof in a big measuring cup by the sink. At the right time I started to mix the dough.

Because kneading bread is a no brainer, I decided to turned the TV on for an update on the relief situation for the hurricane victims and continued mixing and kneading the dough but it was supposed to make a soft dough and this was getting as hard as a rock.  I was wondering what did I do wrong.

Ah, I know, I must have made a mistake when I measured the flour because there was still lots of flour in the bowl.
No problemo, I'll just add a wee bit more warm water and work it in and that will do the trick.... It wasn't working.  My bread still felt like a rock and had no elasticity and I'm contemplating throwing it away but I'm craving.....

I once was poor when I was growing up and we never threw food away because there were starving children in the world who would gladly eat it the way it was... and I've been reading Frank McCourt's memoir entitled Angela's Ashes and the misery and squalor he lived in  and how hungry and starving they always were as he grew up, and this was still fresh in my mind.

I oiled the bowl and put the rock in it to rise and I walked to the sink to wash my hands. I know the great cooks out there are laughing their heads off......

Maybe I'm getting old and senile and I know that I'm out of practice..... Then a lightbulb moment ... the friggin yeast is still on the counter and there's enough liquid in the cup to make a difference.

I cut the rock in pieces and added the yeast liquid and after much cutting and squishing some more I poured half of the lumpy goo into my food processor with a dough hook and give it a whirl and it is beginning to look like a mushy dough. I repeated the other portion and dumped it all back on top of the left over flour in the big bowl.

It's starting to feel more like the bread dough I used to make. I kneaded it all nice and  I placed the bowl it in a warm oven to rise.

By now my kitchen is a mess and I have more  doughy bowls and spatulas than an army cook. It took me about twice the time to make this bread than usual and I knew that I would not have time to shape it into  sweet bread roll.

It's time to go to the barn so I punched the risen dough and made two loaves and put the pans in the fridge so it will not rise and I cover the tops with oiled parchment paper to bake the next day.

When I got back from the barn, I opened the fridge and to my surprise the two bread have risen enough to bake. The rest is history 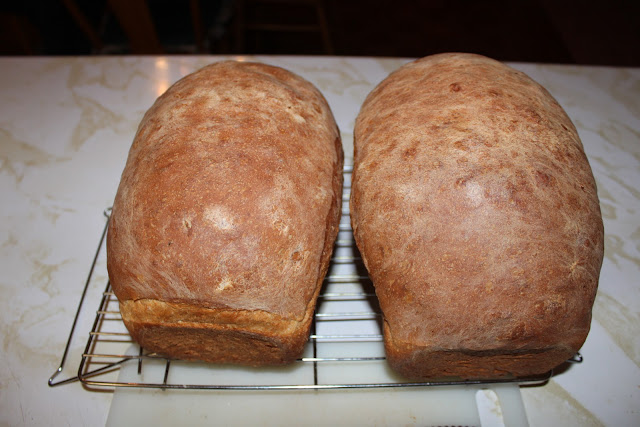 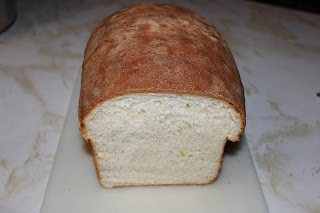 So we had some fresh sweet home made bread for our desert. It has some lemon zest in it for a nice taste.

This has been a particular hard week with more calves being born and more calves getting sick and not enough place for them so we had to tether some down, we had herd health and deworming and vaccination for the big calves and hoof trimming for the cows.

One morning this week,  a cow was ready to calf and she needed help but every time I got in the pen, she would turn her rear to the wall and she would  lay down.  Not a good place to give birth. I called my son but  by the time he arrived  I had already pulled a big bull calf out by myself and was washing my hands.  She was an older cow so it wasn't too difficult but it felt awful heavy and I dragged the calf away to safety to clear the mucus from his mouth and  and by the time my son arrived the calf was breathing. I was more concerned with clearing the liquid from the mouth since his head was still covered with the membrane when he came out. At the time I didn't even realized that he was a big calf.

On Wednesday I had two more big bull calves born. My son had to pull one out and I assisted. I vaccinated all the calves soon after they were born.

The last one one that my son  pulled ate well the first time but  refused to eat on the second day and had a high fever and at this point I suspect a bad batch of vaccine. He won't drink his electrolyte from the bottle and we can't force feed it  because he can't stand up. He was found dead this morning and we had an autopsy done and he died of a congenital defect. Part of his colon was missing. The vet ruled out a bad batch of vaccine and he reassures me that everyone else are plagued with sick calves because of prolonged  damp and warm weather we've been having and things should get better as soon as the weather is cold. He said that even the horses are getting sick.

I've had 18 new  baby calves born in just a little over a month and I have a couple of more cows to calve on my old list and then I get a new list of the next batch of cows to calf. It's no wonder I can't make bread anymore, hahaha.

I hope that you all have a great weekend and that you realize that next month is Christmas.