SPRING IS ON ITS WAY AND I'M THINKING OF GARDENING

The weather has been amazing and the snow has been melting these last few sunny days. What a sudden change from extreme cold to nice warm days. The sky is so blue, it takes my breath away and it gives me hope for Spring.

I planted some Geraniums seeds on February 13th and tomorrow they will be a month old. I can't believe it's been a month already. Time sure is going fast. Yesterday, I transplanted them in small pots and transferred them in the basement under my grow lights. 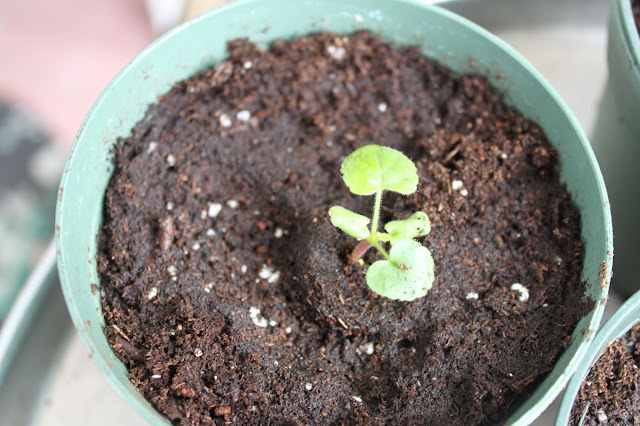 Here is a specimen of my Geranium seedling.

They are slow so it's important to start them early. Not all my seeds germinated as some dried up because of low humidity in the house but I still have more than I need... I had them in my sunroom but didn't put plastic over them as I was afraid it would get too hot inside the plastic bags.

I cleaned out my grow light unit that was under water for 8 days in the last spring flood and George only had to replace one fluorescent tube. It's amazing that the unit still works after being toppled over and under water for so long.

On March 11th I started some pink and red Inpatients and I put them on a heat mat under the florescent lights with plastic bags over them to keep them from drying out.

I love ginger and use it often in stirfries. This year, I tried a new experiment and planted some ginger roots that I purchased at the grocery store. I cut the piece of ginger in two and planted them with the little nob up 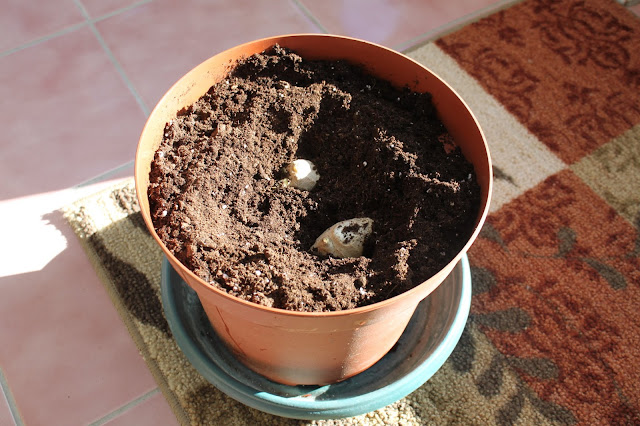 I watered the pot well and covered the roots with an inch of soil and put it in the sun in my sunroom.
I follow the sun with it so it can get as much as possible since the daylight is still short. 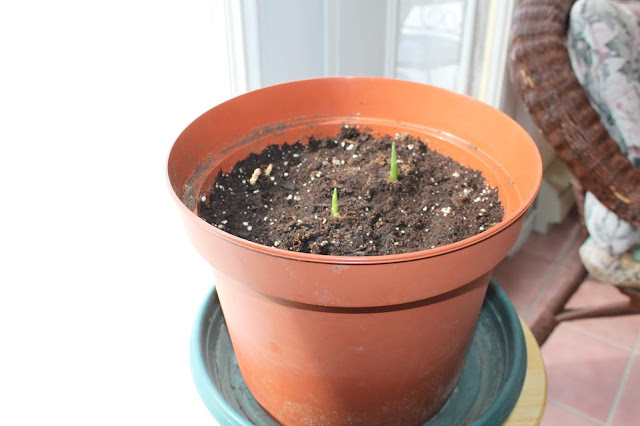 This is how much they have grown since I planted them a month ago. So far, they look healthy.

The other day, I also planted some old seeds to test if they were still good and I can see two have rooted on the edge. I think they might be blue Morning Glory.  I have some lettuce and lupins seeds in there as well but they did not sprout yet.

Another first, I ordered some blueberry bushes this year. It was a project that I was going to tackle last spring but severe flooding got in the way. I ordered 2 varieties, 4 Chippewa and 4 Northland and it will be several years before I can pick blueberries from them.  They say it will take 4 years to produce berries. 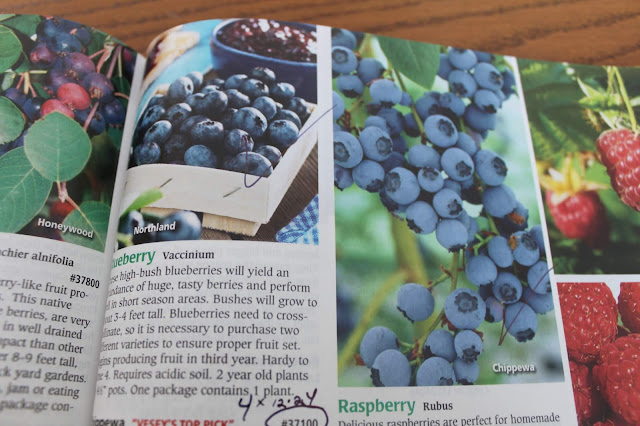 I haven't been very productive but I've been having fun playing cards with my husband every night rather than get on the computer. We play a game of 45.

I hope you are having some spring-like weather where you are also.
Thanks for stopping by and leaving a comment.
Hugs, Julia

A WEEK OF LOSS AND GAIN

The last week of February, in a nutshell. 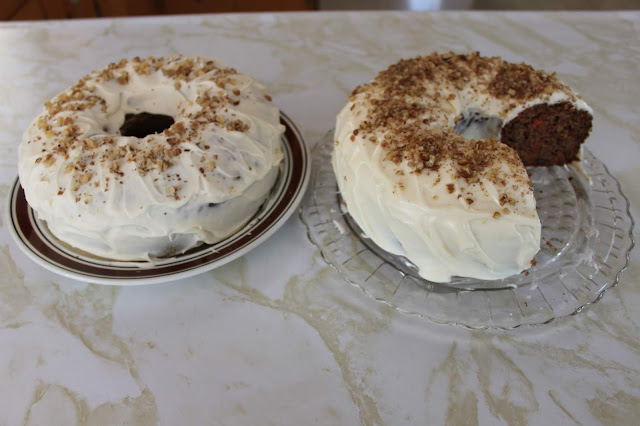 We celebrated our 53rd Wedding Anniversary and I made a carrot cake for us and one for the church. I help serving tea at pancake supper which was a week before Shrove Tuesday. It was well attended despite the bitter cold and blowing wind.

We attended the funeral mass for a dear friend who lost her fight to cancer at age 56. We lost another dear friend after he fell and broke his hip in his home. He went through surgery and because of medical complications, he died several days after. 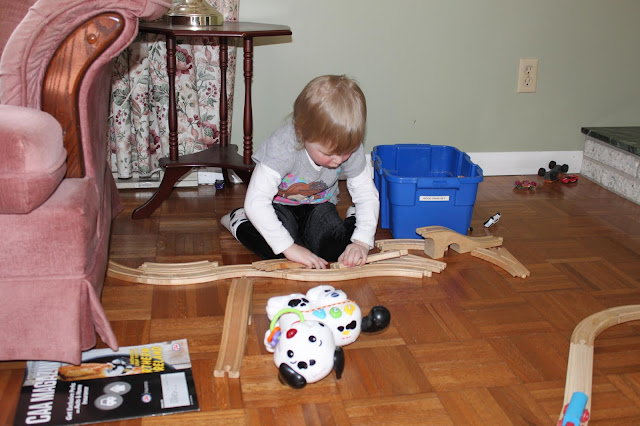 I babysat my great grandkids while their mom and dad went to the hospital for the birth of their new little sister. Here miss W. setting up the track by herself. I had a lot of fun playing with the kids but by night I was all tuckered out. My son Vaughan took over for me for the overnight babysitting. 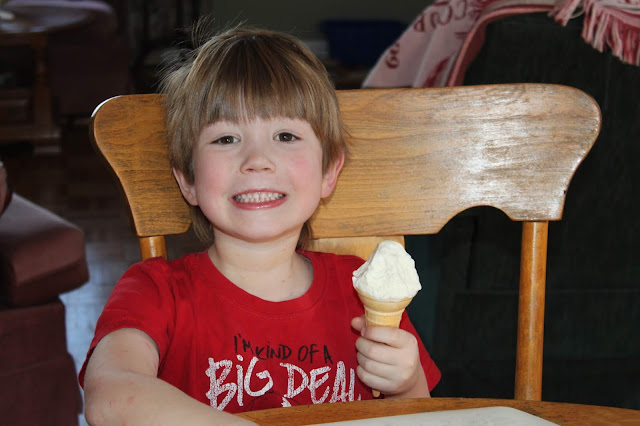 Big brother is enjoying an ice cream cone at the table.  He's so well mannered. 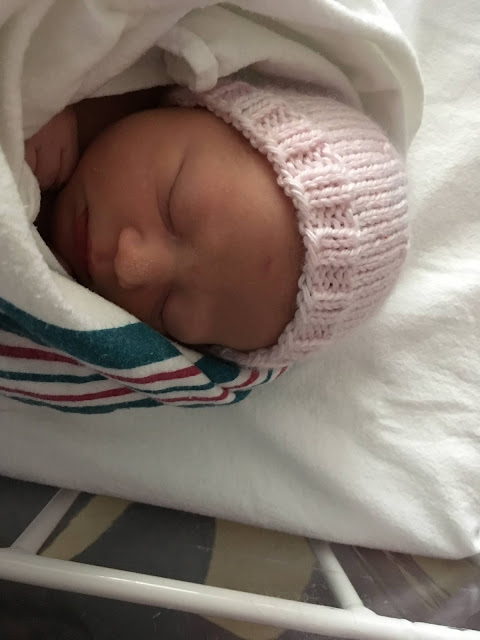 Then the new little sister arrived.
I couldn't take a great photo of our new little great granddaughter in the bassinette. She came earlier than her due date because it was deemed safer for both mom and baby.  She weighs in at 6lb 5oz. 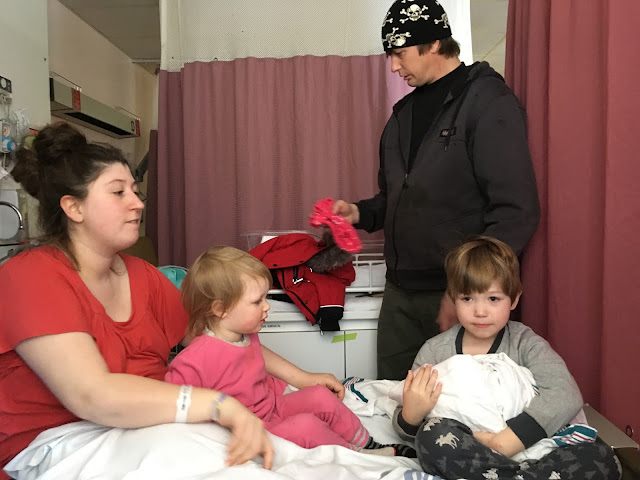 The happy big brother wanted to hold her while his sister is content to sit close to mom. 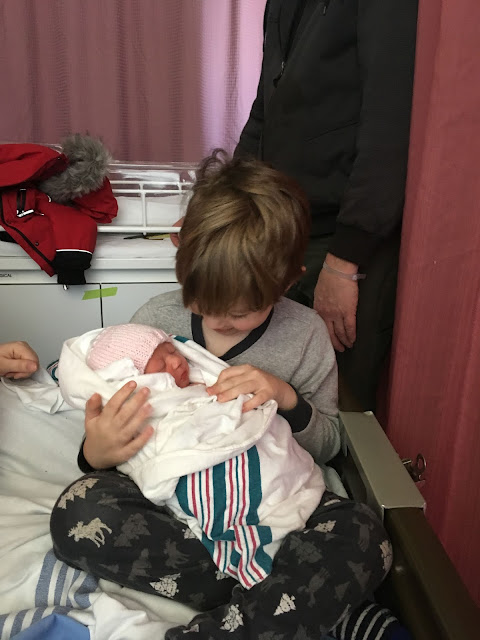 Can you see that big smile? He was over the moon with the new baby sister.
I asked him if his heart was getting bigger and he said "Oh yeah" 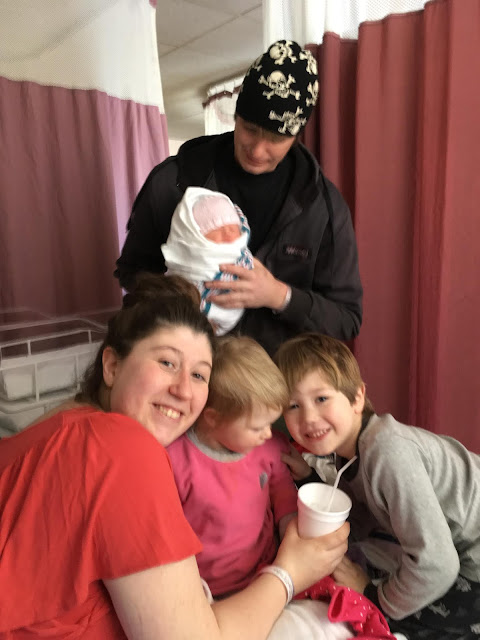 Here is the happy family.
The last picture before I left the hospital. Sorry about the poor quality of the photographs. I had forgotten my camera and used my cell phone. My hands are not very steady.

We had extremely fluctuating temperatures during February, warm days and very cold days, lots of snow, wind and blowing snow, frozen pipe, and hoses at the barn but also we got lots of sunshine which made thing a little bit easier to bear.

Welcome, March. Only 19 days to Spring. Thanks for your comments, they are very appreciated.
Hugs, Julia