PLAYING MY VACATION AWAY

I better report on my trip to Ottawa. 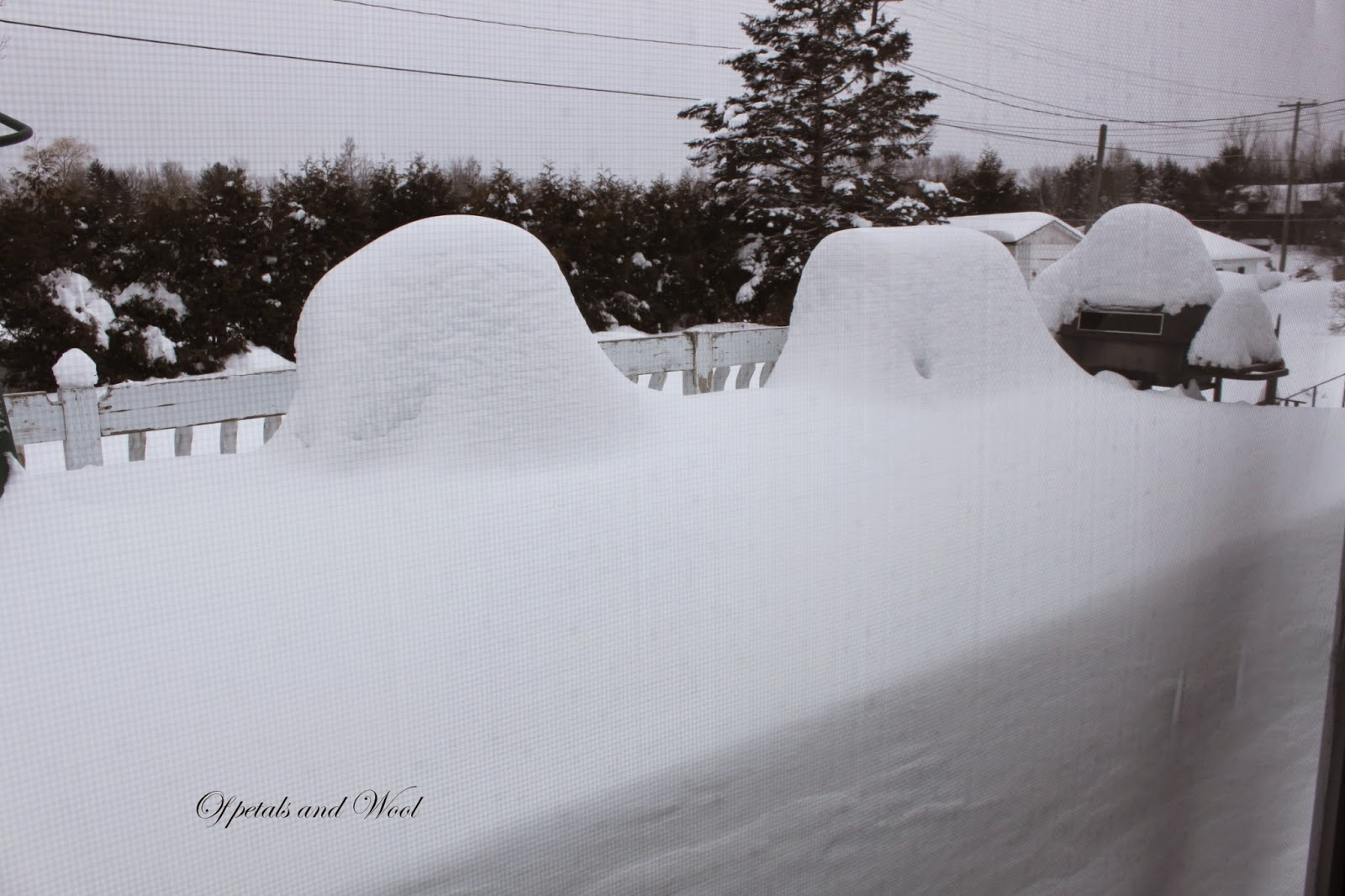 This is what my back deck looked like when I left Fredericton. And another major storm is on the way for this Sunday.  If you live in California, you can come and play to your heart content  but leave your bikini at home...


The flight was noisy but smoother than expected and so was the landing although the plane was a little late arriving because of flying against the wind. I didn't freeze to death in a crash and I was very happy for that, although I was freezing in the plane before take off.  It took a while to deice the plane and we were on our way.

I passed the time playing Free Cell on my laptop and it made the flight go quickly. My brother in law picked me up at the airport and drove me to my daughter Christine. 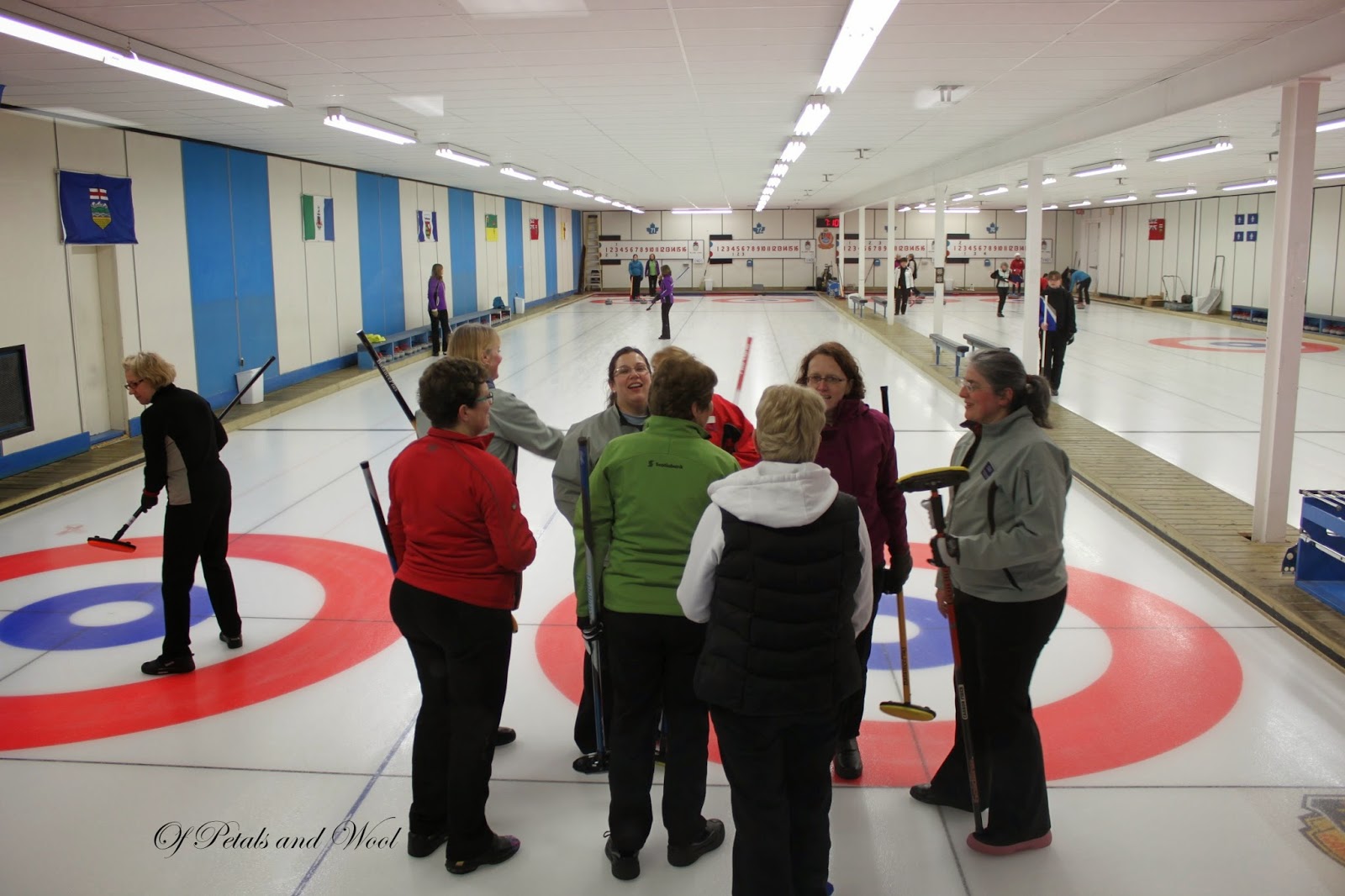 I went to watch Christine curl with her team at the curling club and they won two games that day. 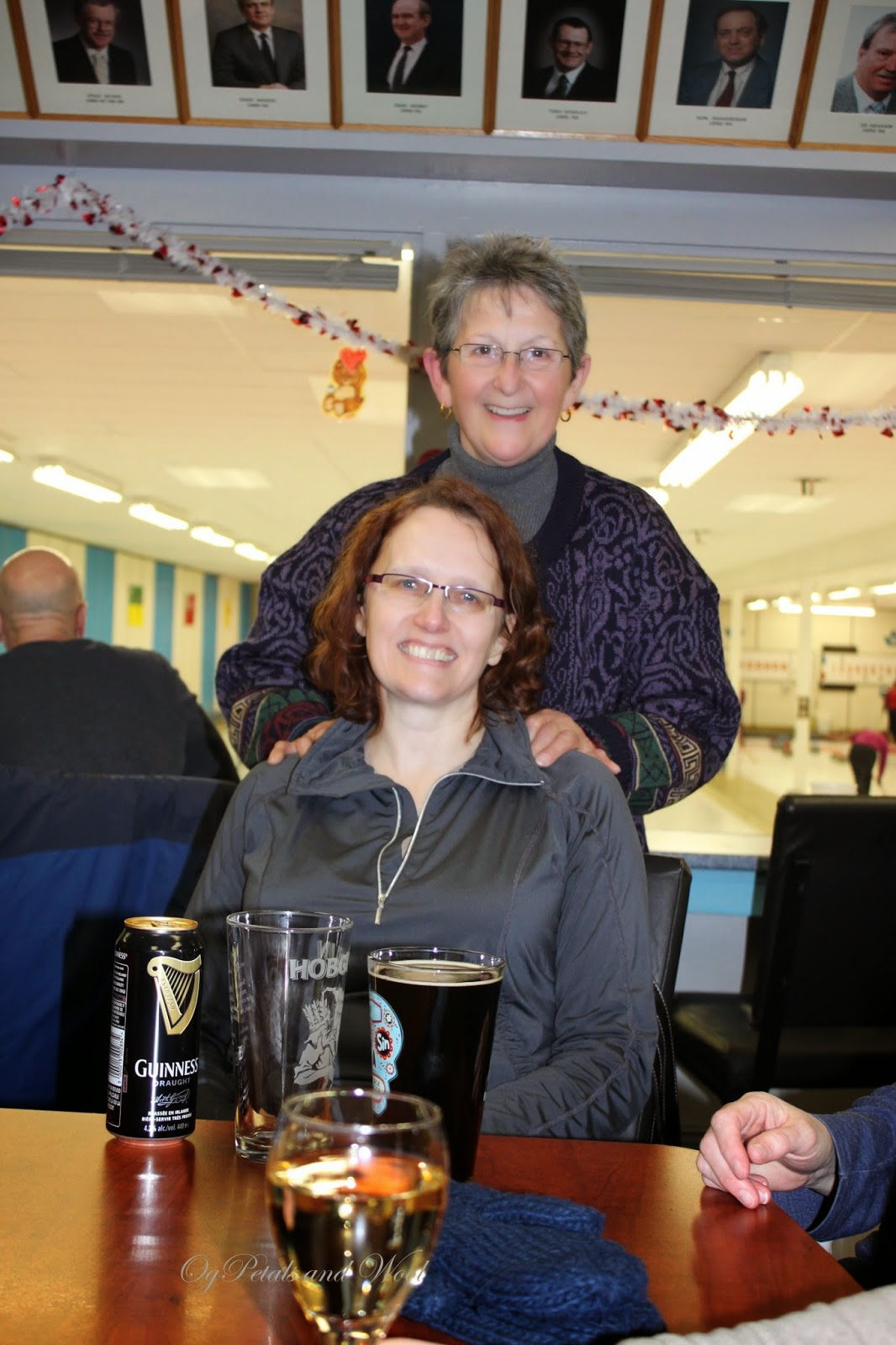 After the games we went to the club and had a drink and I massaged some tight muscles on some of the girls.  The ice was different at this other rink and the girls lost the last game but they had a good time anyway.

The next morning James and Daniel kept me busy playing. I'm still in my PJ's and I'm glad you can't see my bedhead. The static in the tent doesn't make me look my best. 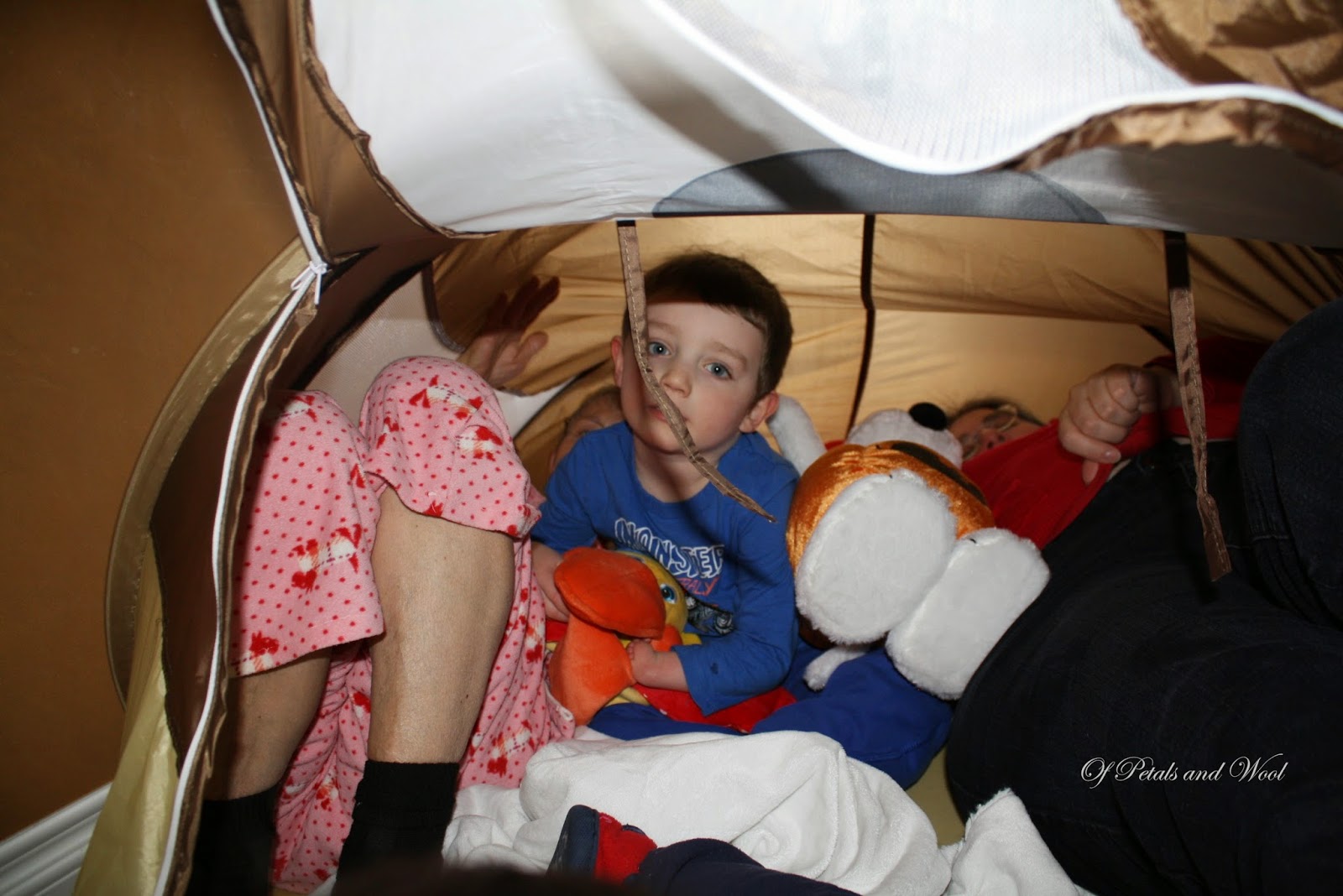 There was me, James, Mama and Daniel in the bear tent. You can only see Daniel's red slipper coming out. You can see how crowded the tent was...Oh and I forgot, Snoopy was in there also. 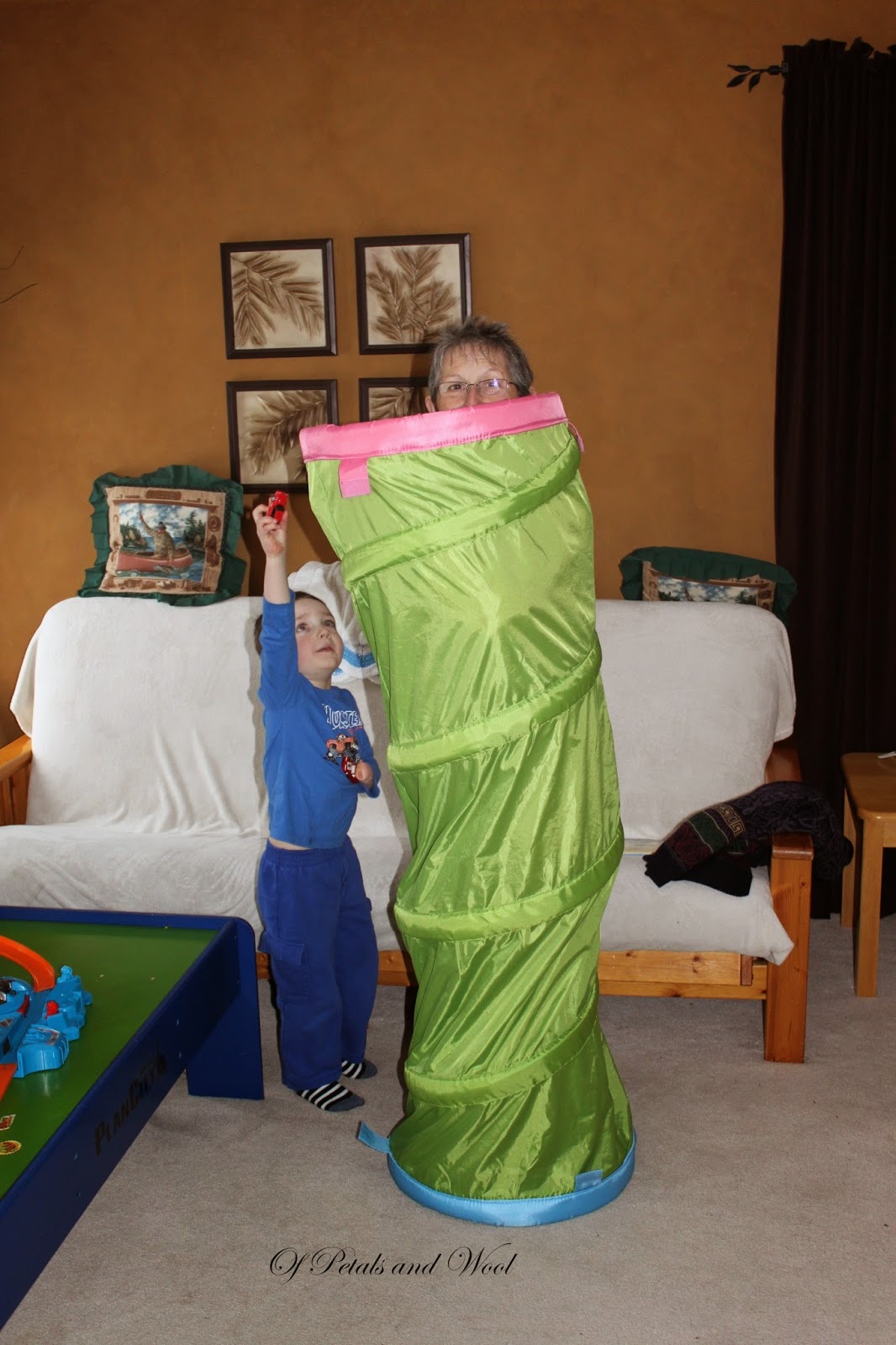 I got stuck in the green tunnel and James think I need some cars in there. 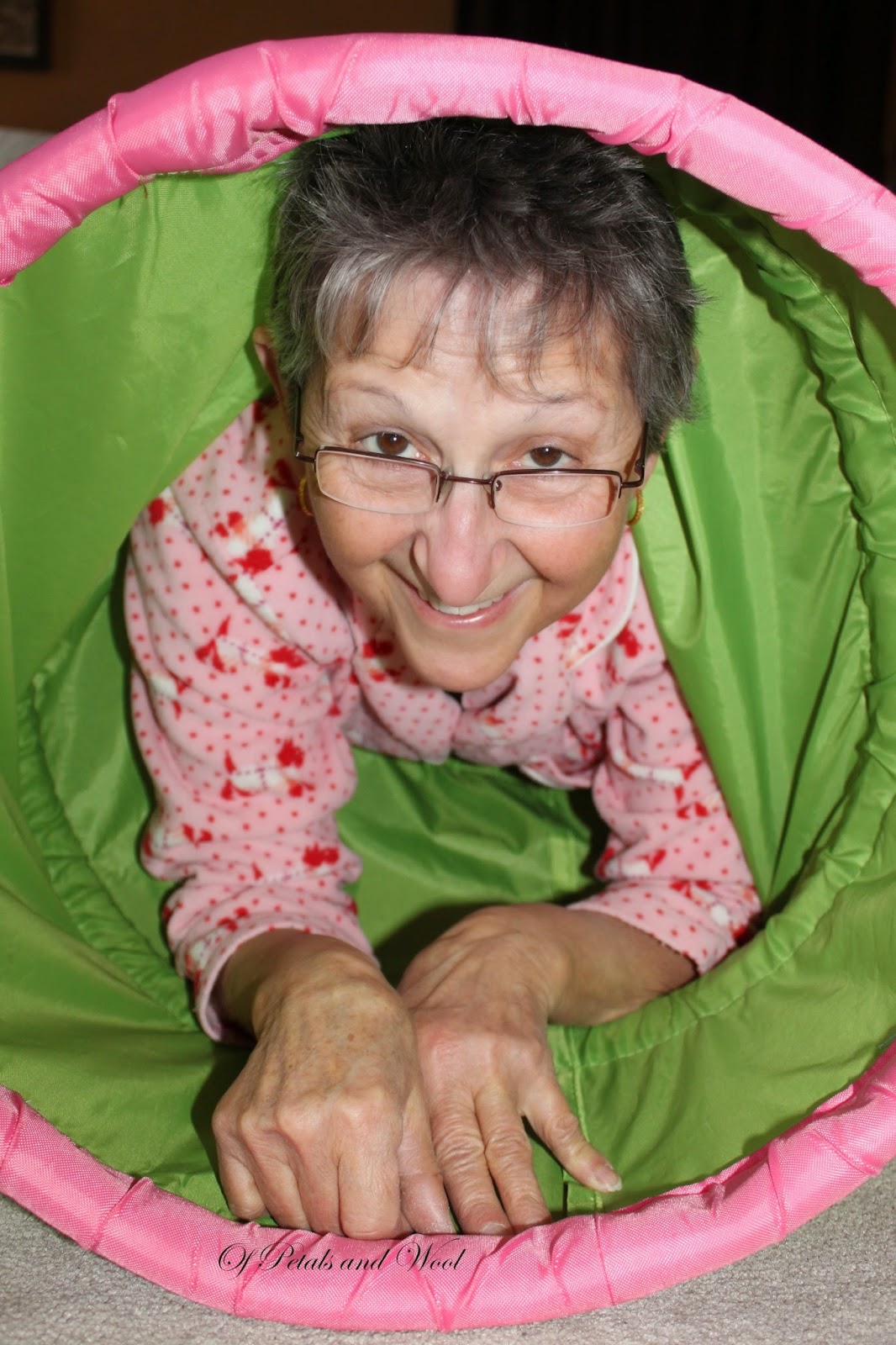 I think I found a way out of the tunnel but I look like a witch who's flying without her broom. hahaha. 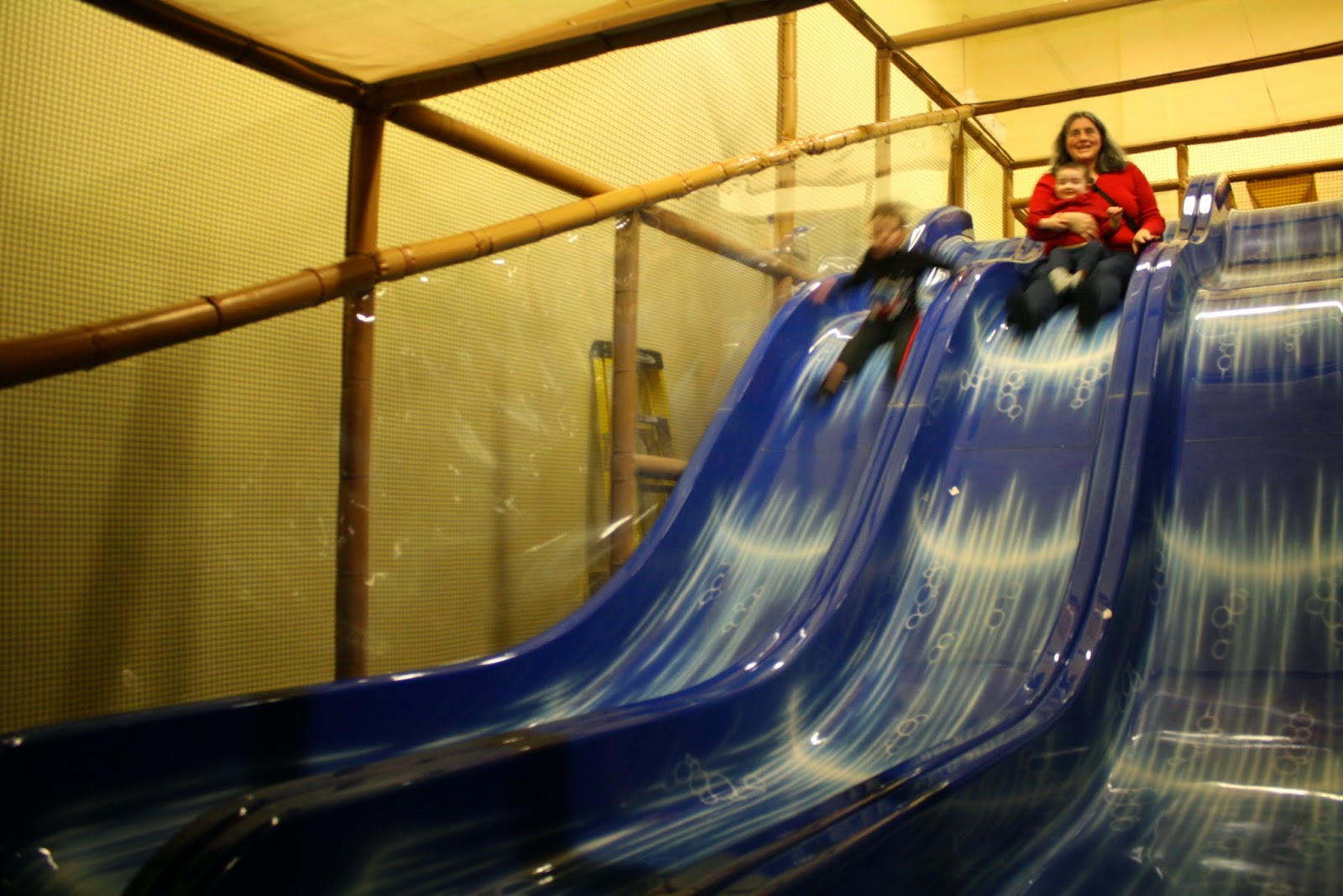 We've been also playing at the kid gym and day care and having a lot of fun. This is Christine and Daniel coming down the tall slide. 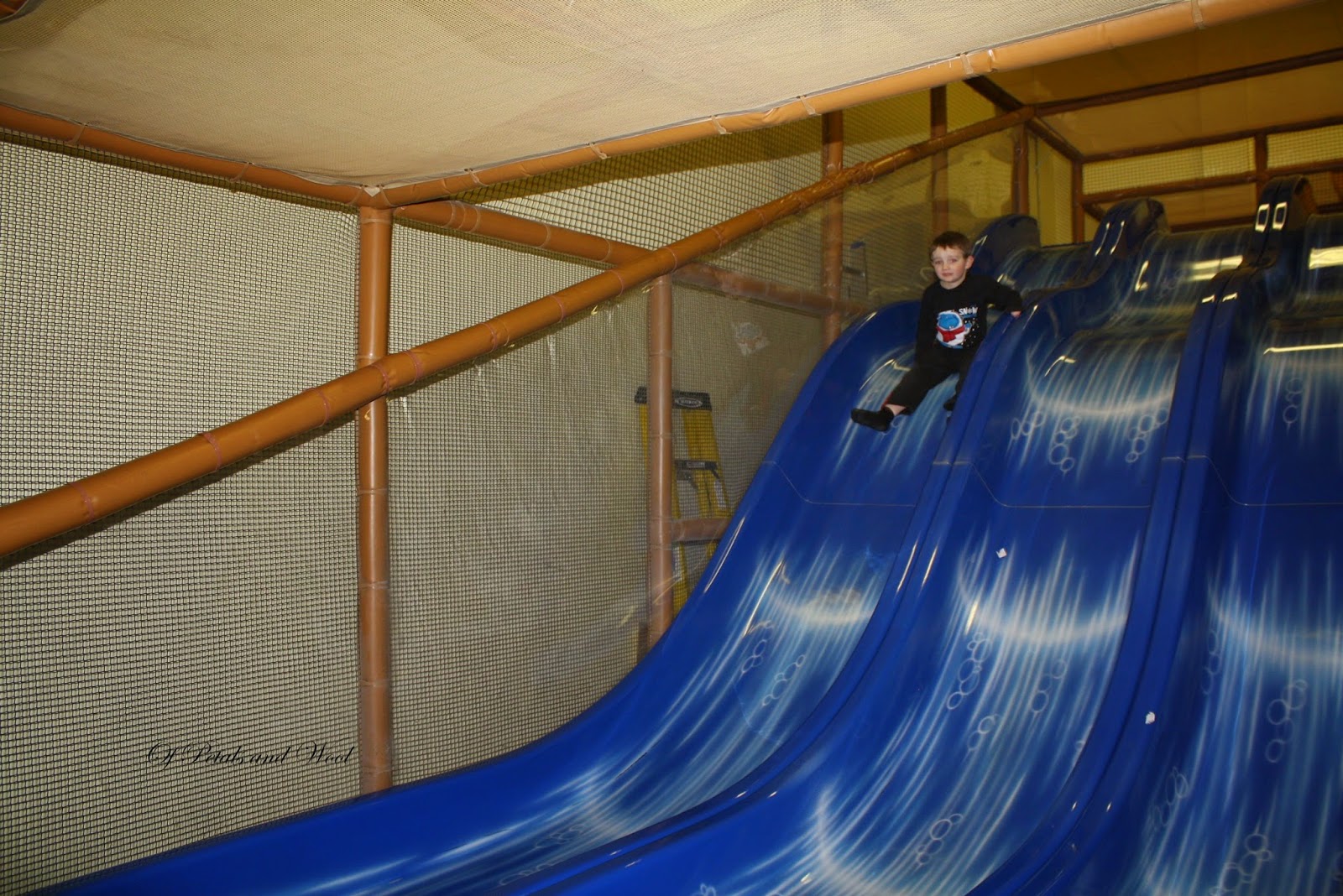 James is big enough to come down by himself. He runs all the time, climbing way up there. 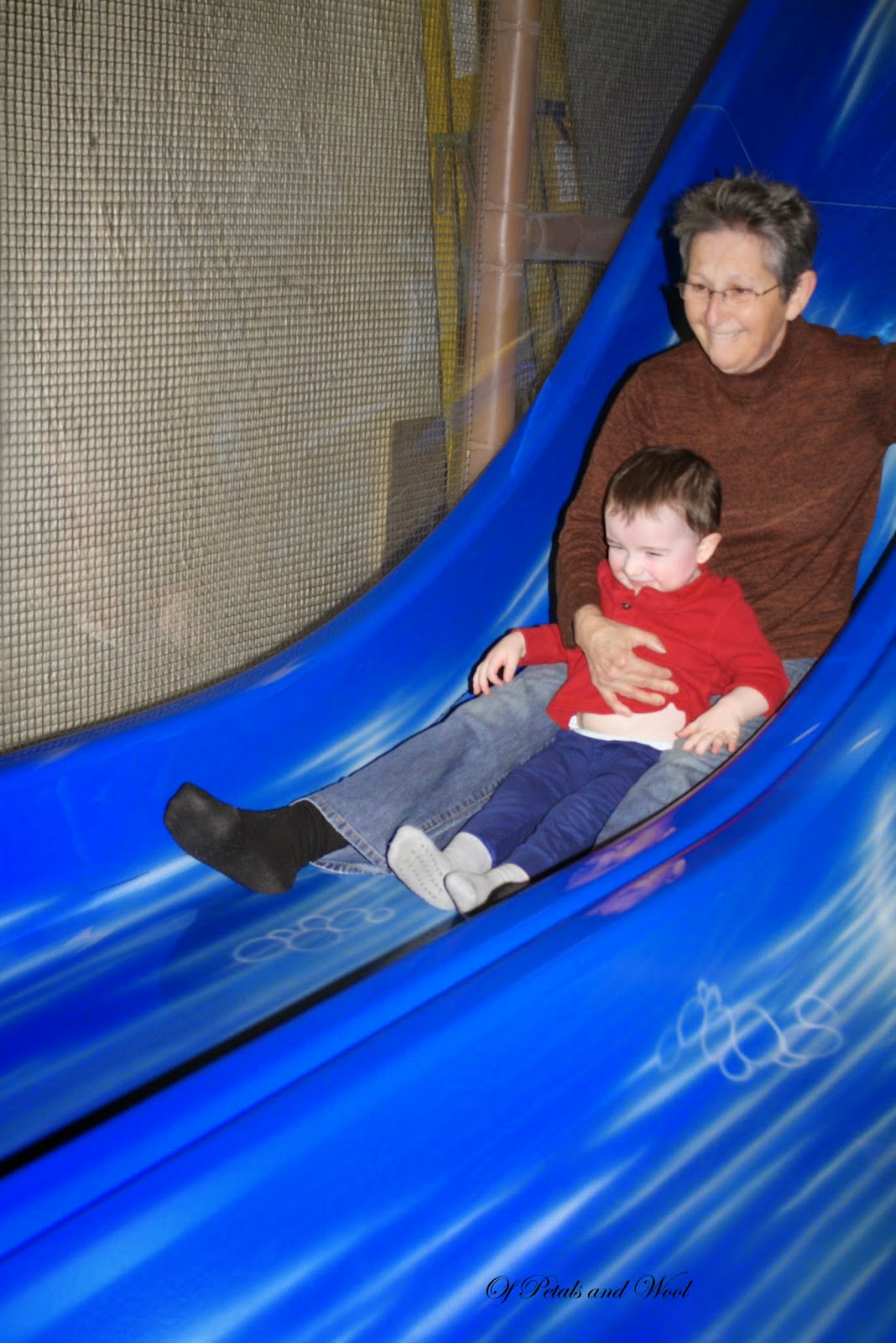 Now it's my turn to come down with Daniel. Can you tell we're having so much fun. That slide was fast for a old lady. 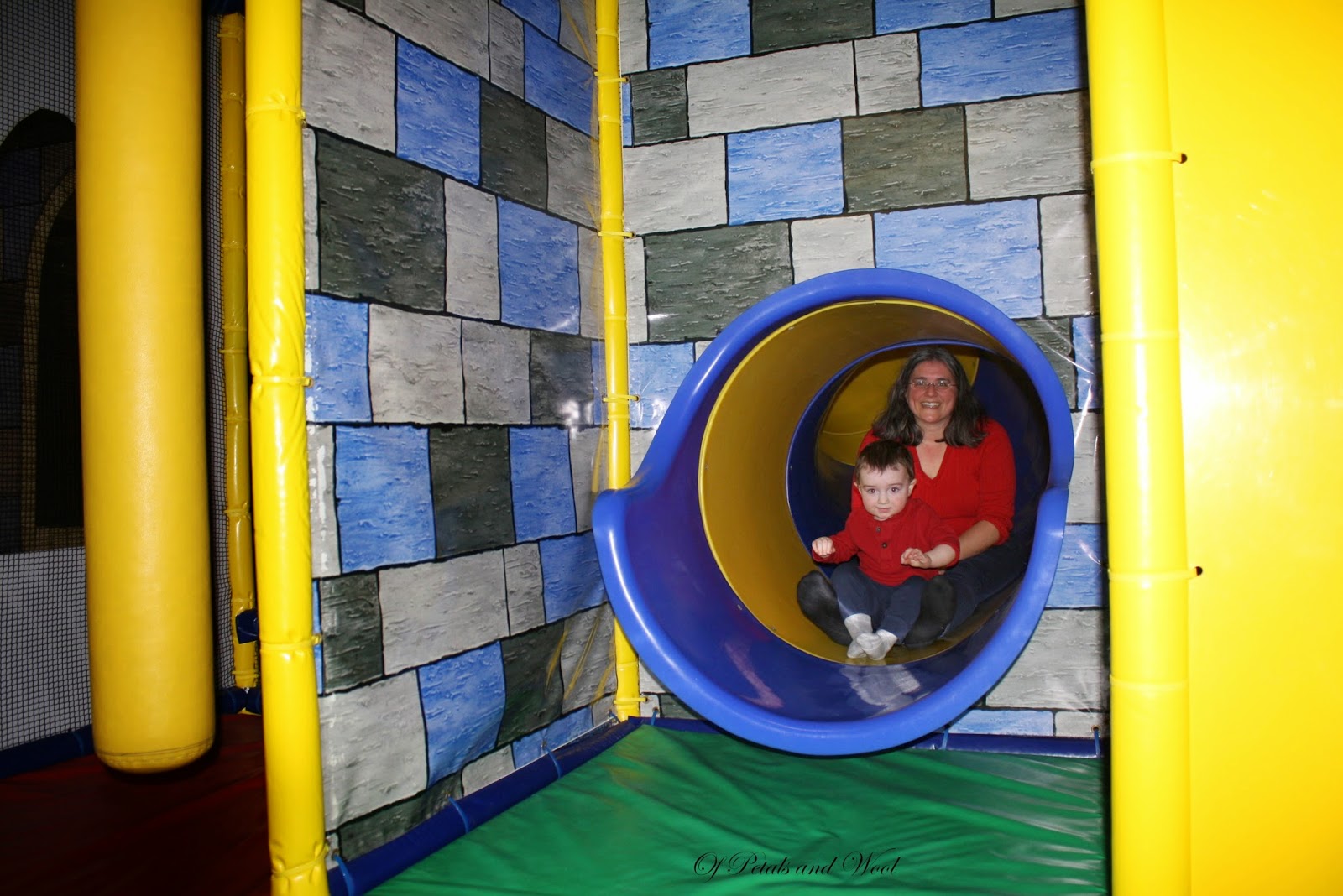 This tunnel slide is super fast and Christine came down looking like a pro but I know she's getting a good work out just running after the boys. There are lots of fun places to climb and crawl and the kids gets there lot faster than we both can. It's a full time job keeping up with them. 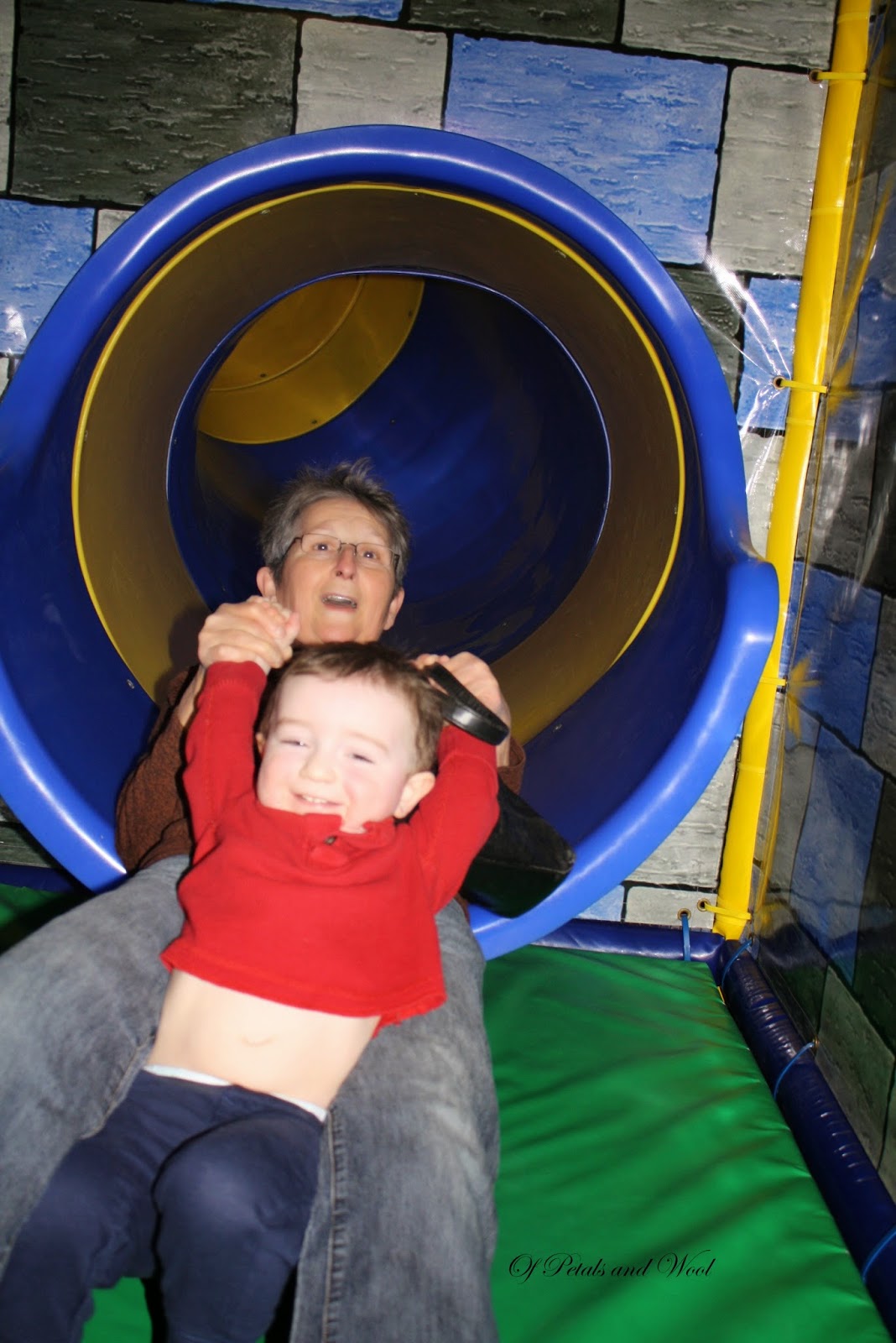 Oh my gosh, I had no idea how fast that tunnel slide was.  lol. Christine captured my surprise quite
well. I'm hanging on to Daniel for dear life... 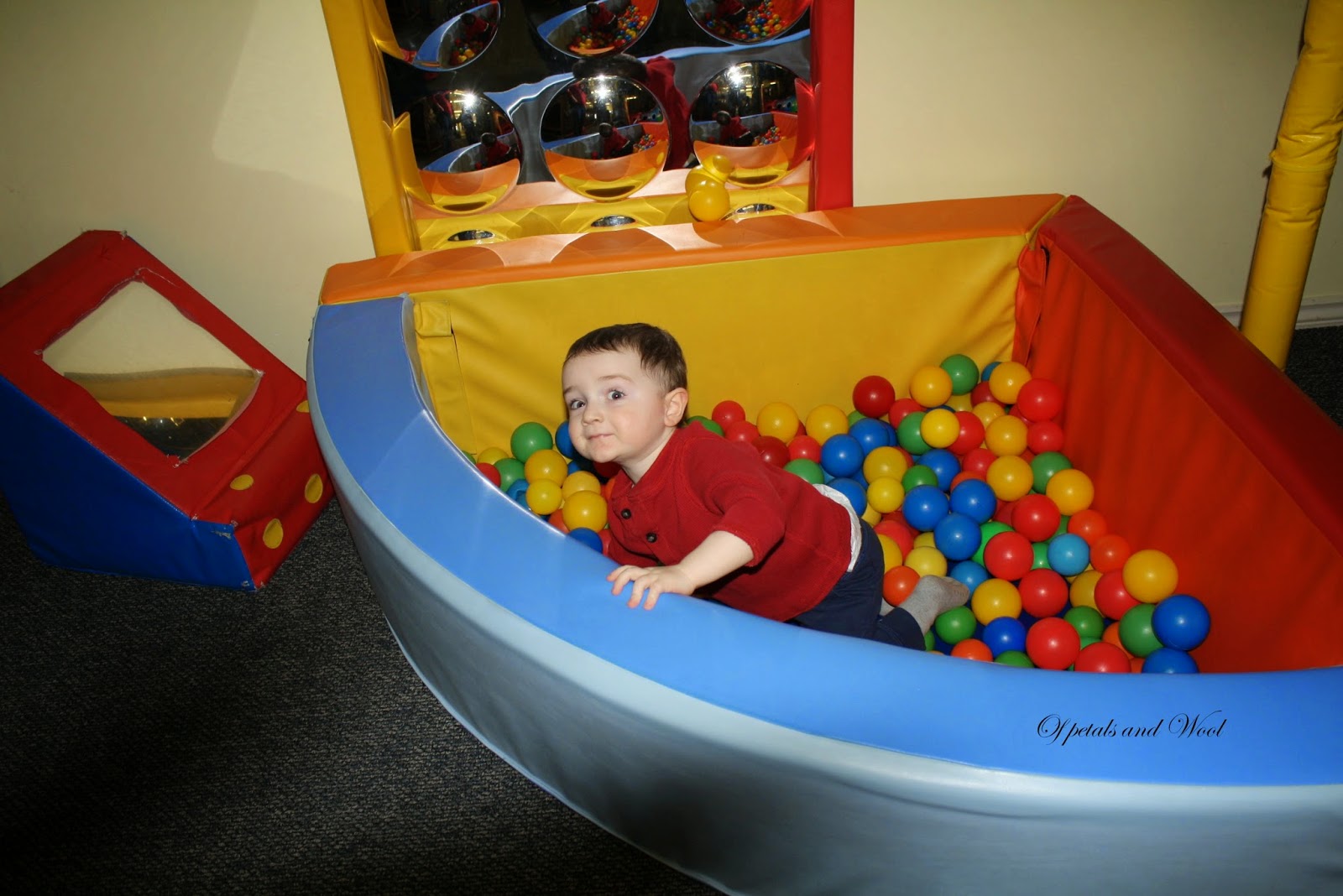 After the workout I got it was nice letting Daniel playing in  toddler play area while I watched and caught my breath. 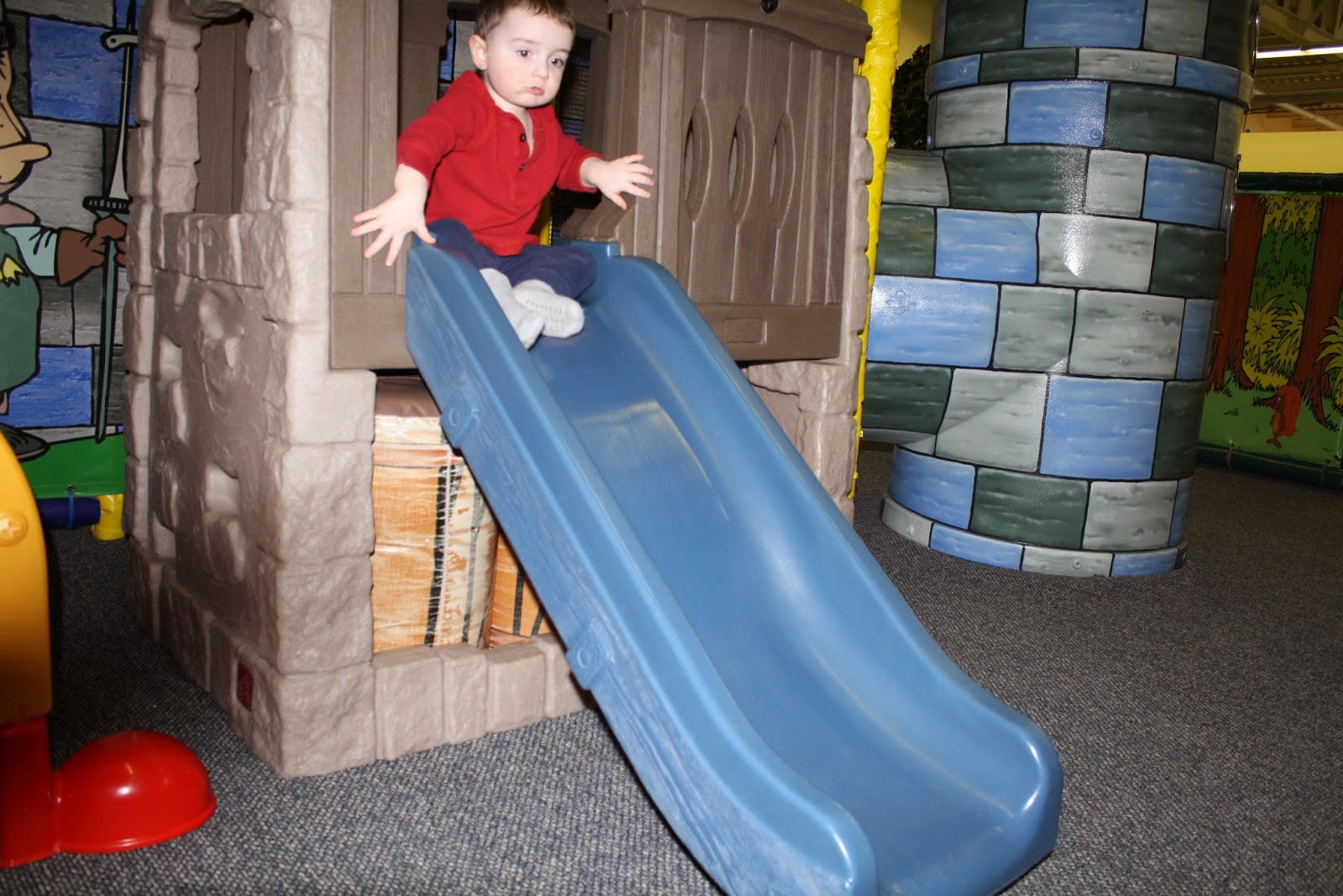 Daniel love running up the steps in the back of the small slide.

We all returned home for a nice hot supper and that evening the kids were so tired of running, they quickly fell asleep after their mom read books to them. I must say, I slept well too.

A couple of days later we went to a larger kid gym in another part of the city and had more fun all over again. Ottawa has all sorts of family oriented play and recreation areas, day care centres. There are skating rinks and lots of parks and playgrounds, etc... A great place to raise a family.

Thanks for visiting and leaving your comments and HAPPY VALENTINE DAY everyone.
JB