NEVER A DULL MOMENT ON THE FARM

Yesterday started off as usual, I dragged myself out of bed and walking in the backyard, I see the lawn with dandelions that should have been cut, thinking, I'll do it before lunch.

As I got to the calf barn, I heard a tiny kitten meowing loudly but I couldn't see it. I got the flashlight to see if I could find out where the kitten was. After several minutes of searching I found it in a dark filthy spot of rubbish near the silos. How it got there I'll never know.

I used a paper towel to pick it up so as to not leave my scent on it and brought it inside the barn and put it in the cat cardboard box that I have with hay in the bottom and covered it with  clean towels to try to conserve it's heat. The other small kitten are always climbing in it for a nap.  The door was left open so if the mother was around she would hear it cry.

I went about my work and some cats came in but were afraid of the little kitten  and quickly scooted away.

When I finished feeding and bedding my animals I took the wee stranger home and put it in a box with a warm Magic Bag that I heated in the microwave  and lots of warm towels as it was still  cold. I called the near by vet hospital for some milk replacer for the kitten. They only had canned milk around $8.00 a can and it had to be used up in 72 hours. I was looking for powdered milk replacer as there's no way this tiny kitten would be able to consume that in 72 hours.

I called Pets Unlimited and they had milk replacer for kittens but it meant a trip up town. Since I already had several errands to run across town I did what I needed to do and  $20.00 lighter I came home with a tiny bottle and nipples and the powdered milk. I tried to poke a hole in the tiny nipple but the top was a bit thick and the milk wasn't coming  through. The kitten was screaming blue murder. So back to the barn to get a small syringe. I cut the screw part off on the end and mixed up a tiny batch of milk and the frantic kitten drank 2.5 cc of warm  milk. I put it back in the warm box and it quickly fell asleep.
The process was repeated every several hours when it would wake up crying. 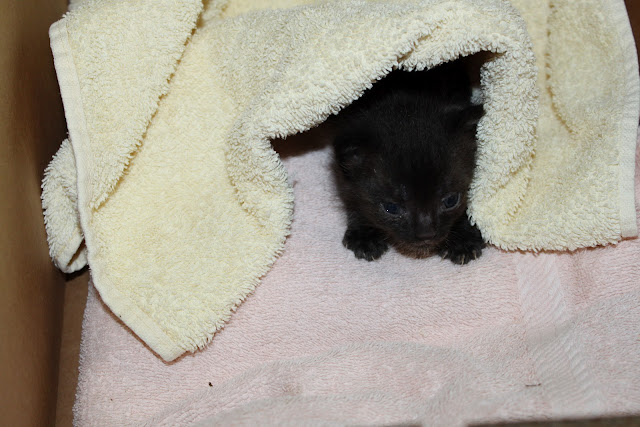 Her eyes were still shut when I found her. After washing them with warm water, she opened them. 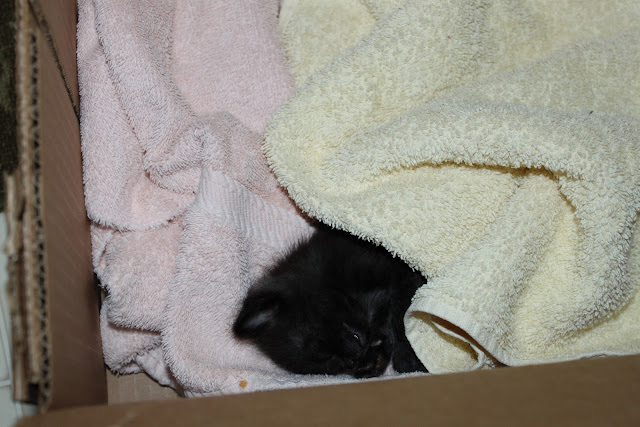 New born kitten can't pee on their own so I used a tissue to gently wipe hers genital to make it pee. and found out it was a girl and since we had a long weekend on account of Queen Victoria on Monday, I called her Victoria.

She woke up twice during the night for feeding and had a little hard poop. I of course didn't get a good night sleep and was so tired this morning and was half an hour late for work because I had to see to her Majesty's needs. She survived the night and is still with us as I type.

Thanks for stopping by for a visit and thanks for leaving your comments. I appreciate them so much.