I BLINKED AND AUGUST IS GONE AND SEPTEMBER IS HERE

August is always a busy month on our farm. Hay has been plentiful this year.  All our barns are full. s      There are still a few fields that are cut but the hay will be left in the field.   There has been a lot of activity like building a new tarp barn. This time George put the tarp on with the help from his friends
.and they did a great job despite of the wind shifting to give them a hard time instead of helping them 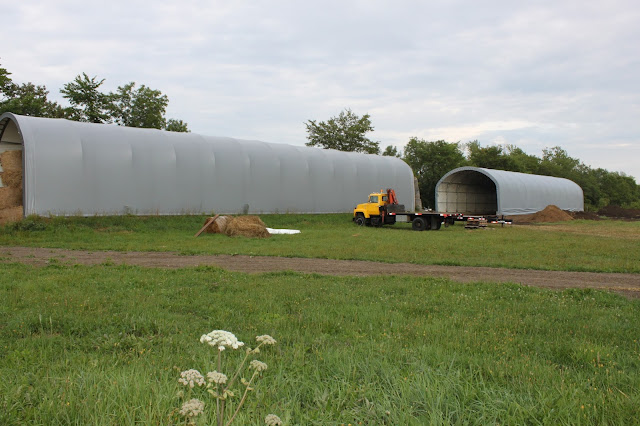 This year one of our local plant nursery gave George a lot of plants they had overstocked and he planted everything. We have so many tomato plants, squash, cucumbers and some other veggies beside what I have in my little garden. A friend gave potatoes so he planted those too.

This year I haven't weeded his veggies simply because I have already way more than I can do.

We had hoof trimming for the cows or maybe it sounds better saying the cows had a pedicure.
We had the milk inspector coming to check each cow individually to see how well they are doing, then we had the vet coming to do herd health to check on which cows are pregnant and which one needs to be dried off before they calve and we had dehorning of the calves.  Just so much to do.

We also had visitors who have now returned home  and I've been weeding and clipping the badly damaged spruce hedge.I had to stop trimming when it got too dry and when we got a good rain, I resumed pruning. It's slow going , one branch at a time.  I'm getting closer to finish if I wasn't chased in by the rain. Unfortunately the trees by  by the road were so badly damaged that I had George remove 4 of them.

I've also been picking high bush blueberries for my neighbour next door  who no longer can pick them because of her bad knees. I think the blueberries are pretty well done for this year. I haven't had much time for blogger or for myself. I rush in to get meals ready and rush out again and it's time to go feed and bed the calves. I've had lots of calves lately. 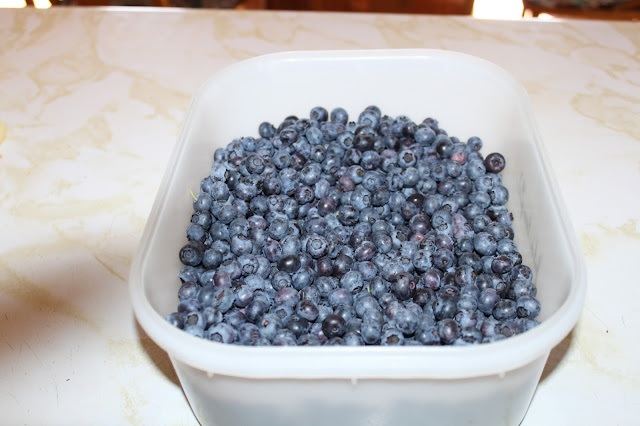 Daylilies are almost finished blooming and soon will be making Lady Ashburnham pickles for George. He's loaded up the truck full of cucumbers for the church ladies to make pickles and they have made a lot so far.

The sun came back out just to tease me after the rain got me wet.  Only half and hour before I have to return to the barn. Did I mentioned the flies are bad this time of year. I have difficulty keeping up destroying them. Cold weather should slow them down...

I started this post last week but I'm having difficulty with my old computer as the curser is working in fits. So I'm having difficulty updating the events...  I can't get rid of that s  on the first line... My photo library is full and it's difficult writing a post.
I may just need a new computer very soon. Grrr... My pictures are few this time.

I can't believe that September is here and it feels like October.
Thanks for stopping in.  I so appreciate your comments.
Happy Labour Day
Hugs, Julia
Posted by Julia at 7:33 PM 38 comments