WHAT I'VE BEEN UP TO

I didn't do a lot on my Childhood Memories Rug but I connected four winter scenes and started a summer scene.  So far the only wool that I've dyed especially for this rug is the light grayish pale blue for the snow.  The evergreen trees and the green in the big tree comes from the free green color wool palette that I got from April De Conick give away when she launched her new Red Jack web site.
http://redjackrugs.com/ 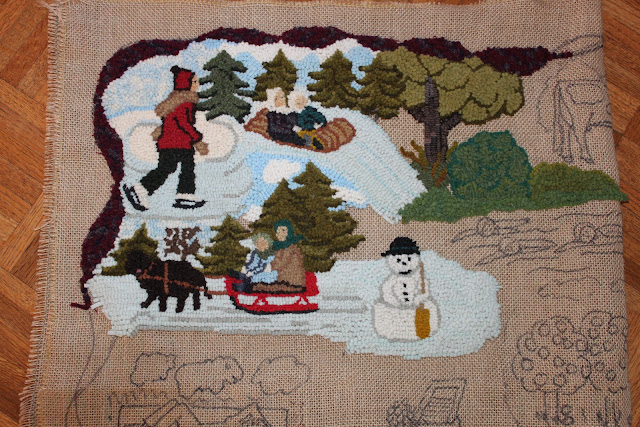 I see that there's a bit of tweaking to do on the snowman's arm but I think that I'll wait until later. I tried to make the snow a bit more pop-corny around the snowman by changing the direction that I pulled my loops. One of the newer technique that I tried for the first time. I'll have to dye some blue for the water though.
When I was young we swam without bathing caps as we swam in the brook in the deep end that we called " La quarerieme"  in french, meaning  "The Fourth" which was one of the  fourth deepest swim hole in the brook. So when I hook the head it will be wet hair. lol... 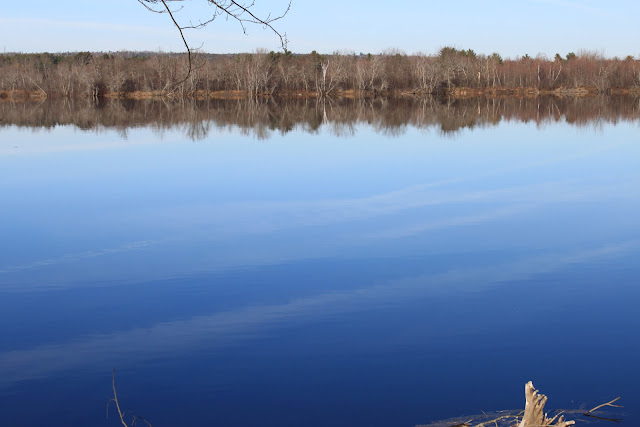 Yesterday and today the St John River in front of our house has been very calm and you can see some clouds reflection the water. All the leaves are off the trees and every thing looks kind of drab except the sky and the water.  The stump that you see on the right bottom  of the photo is a tree that was uprooted in the high wind this week and it's floating on the river's edge. 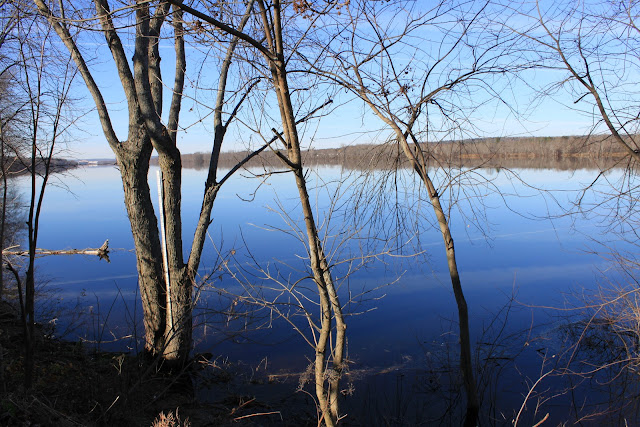 This photo was taken directly in front of our house  looking toward the North. At a distance, the white thing you see is  a section of the Princess Margaret Bridge being repaired. It's covered with some protective canvases  as the men work to repair the damage from years of use.  Just beyond the bridge is Fredericton City Center. The sun was low in the sky when I took this photo. Notice the white stick attached to the tree. This was put there by our elderly neighbor several ago to measure the rising water each spring. 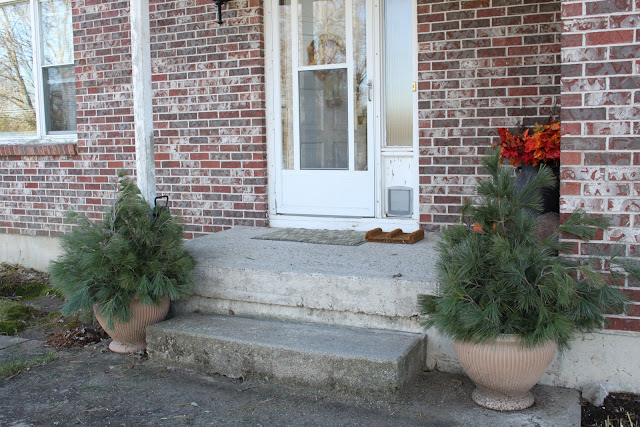 We has a lot of wind this past week and a big branch broke off from one of the big pine tree in our lane and I decided that I would save the smaller pieces to put in my empty flower pots outside in the front.  Now I need to decorate them. I still have some fall decorations hanging between the screen door and some fall leaves in my big black milk can.  I'm noticing that our place is beginning to look run down. There's moss growing on the window sill and the cement is pitted badly and the house needs painting. I need a new door too etc, etc, etc.
Notice the little pet door on the bottom right of the door. About 10  or 12 years ago, I went on vacation at my mother's place by myself for a week and while I was gone my husband got tired of opening the doors for the three cats and decided to install a pet door so he would not have to bother letting them in and out.  I was quite disappointed when I got back to discover what he had done.   Our cats were bringing, chipmunks, mice, moles, frogs, and anything they could bring in and let them loose in the house and they would chase them around and play with them. I taped the door shut and added another piece of white styrofoam  on the inside so the door couldn't be seen from the inside. 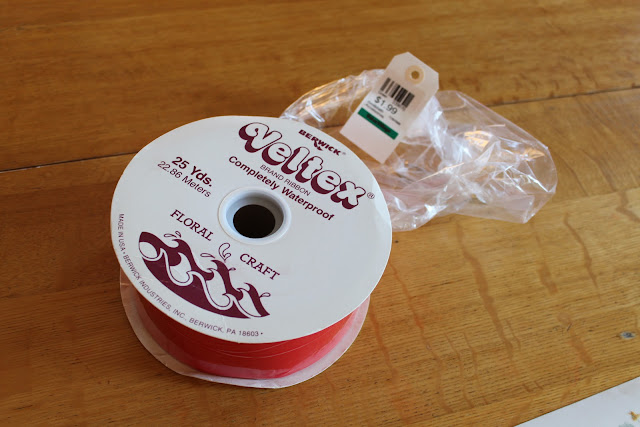 I bought this brand new roll of 25 yards wide red waterproof ribbon for outdoors for $1.99 at Value Village this summer. I tried to make a multiple loop bow for the pine decorations  but found the ribbon a bit stiff to work with. I need to get some florist wire to make my bows. I'll give it another try later.

Thanks for stopping by and leaving a comment.  JB
Posted by Julia at 2:48 PM 7 comments