Finally I'm seeing an improvement with my little sick twin bull calf, Raspy. He was standing up waiting for me this morning and drank a whole bottle of milk and again this afternoon he almost finished his bottle. About a third of a pint left.  Thanks for those who sent some encouraging comments.  Raspy was born on the 7th of August and has been sick most of this time. He quite skinny poor little thing. His twin brother  was still born five hours earlier. 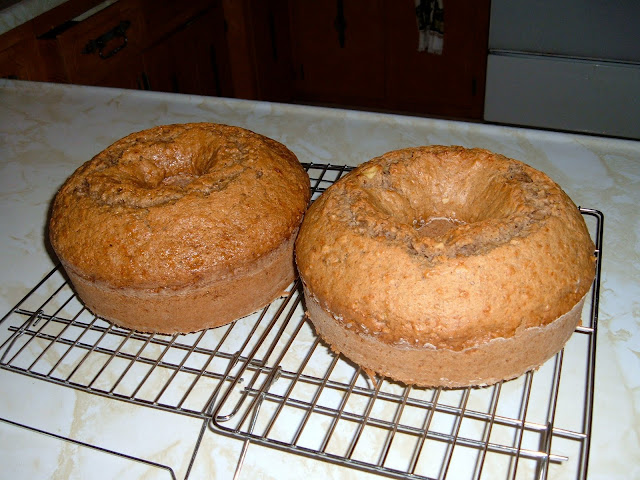 Yesterday I said that I would have some pictures of my zucchini cakes. My daughter put some cream cheese icing on both of them but I didn't take any photo of the icing. I gave half of one away to my son.
She sprinkles some grounded walnuts on top. It 's really a yummy cake. It's really a zucchini bread but I baked them in tube pans for about the same amount of time but used 1/4 cup less of oil and it's still moist.

I did another little bit of whipping on my rug but didn't take any photo, instead I've prepared some Bread and Butter  and also some Mustard Pickles in a brine  to soak over night to try to use some of my excess cucumbers. I've given some more  to the church for their pickling. Tomorrow is pickling day again.

My oldest daughter has returned to Rome today to finish her vacations before returning to Scotland so needless to say I spent some quality time with her  before she left.

One thing that I feel extremely blessed about is the fact that all my four grown up children are very loving and caring toward each others and are not afraid to show their love publicly. It really warms my heart to see that there is  no rivalry between them. They are all unique and are not perfect but they all make me proud.

You've probably noticed that I haven't posted any photos of them or given their names, it's because I respect their privacy.
Posted by Julia at 11:35 PM 0 comments

QUALITY TIME WITH MY RUG

I spent some quality time with my rug trying a little bonding... I mean binding. I'm using a cord and double yarn to whip the edge and then I'll sew the binding tape. Maybe I'll post some photos tomorrow as I have to hit the sack.

My little calf is still not getting up but it drank 2 pints this evening which is better than yesterday.  JB
Posted by Julia at 12:03 AM 6 comments