IT TOTALLY SLIPPED MY MIND OR MAYBE MY MIND SLIPPED AWAY...

I just realized today that I had promised some pictures of my renovated bathroom way back at the end of February but had been so busy that I just couldn't seem to find time to post. Things have kind of calmed down for me so I better get on with it. 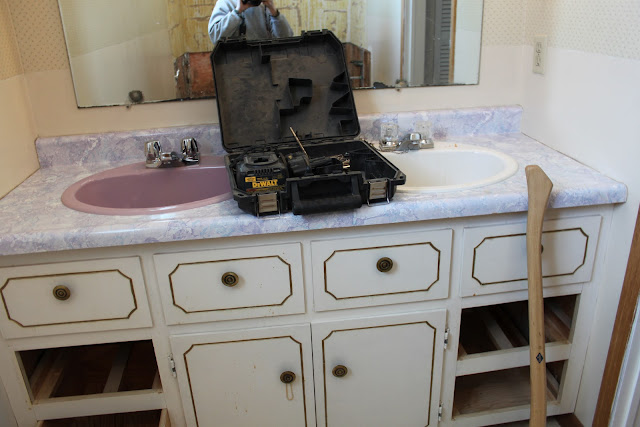 The vanity was built  by my brother when we built the house and my husband wanted to try his new router toy on ALL my cupboards and cabinets much to my chagrin....  He did every doors.
Colored appliances and fixtures were the rage in the 70ies. The girls wanted purple in the bathroom. The sinks had chipped and started to leak so my husband had temporarily replaced one sink with one found at the church yard sale. I don't think that it even cost him anything. The vinyl wallpaper on the upper wall was a challenge to removed. 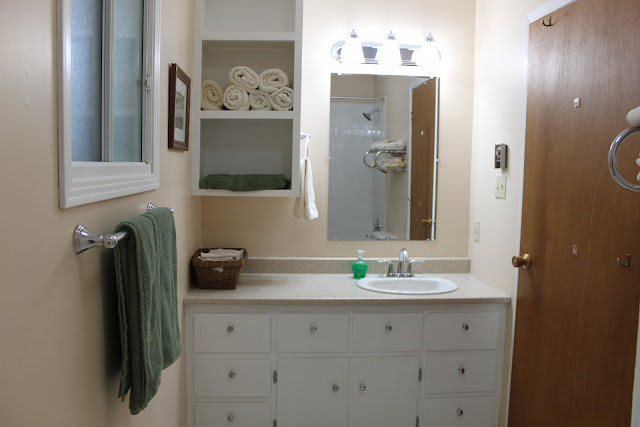 We both wanted just a simple bathroom that was fresh looking and easy to clean with no fancy and trendy stuff or colors so kept it neutral. The cabinet doors and drawers were left as is, but sanded and painted with some left over quality  paint that I had from a couple years ago. The groves don't stand out like they used to.
The door still needs painting and I'll get around to it sooner or later.
I used the left over paint from the master bathroom that was renovated last year to keep costs down.
I only wanted one sink so I  got a new vanity top and got a shelf unit built and replace the large mirror with a smaller one. I got a wide towel bar under the window and a towel ring on the shelf unit. 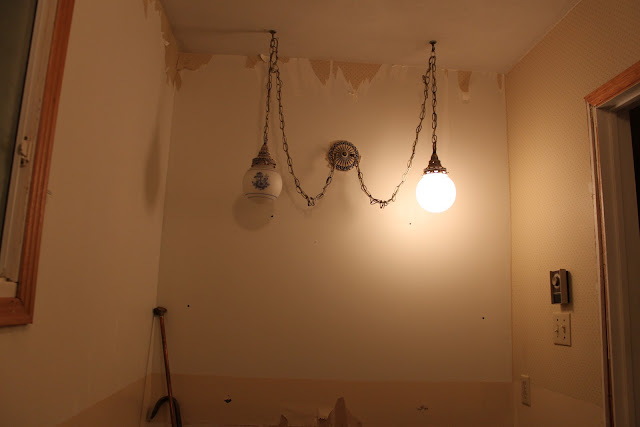 These dated fixtures were removed. One of the light bulb was burnt. 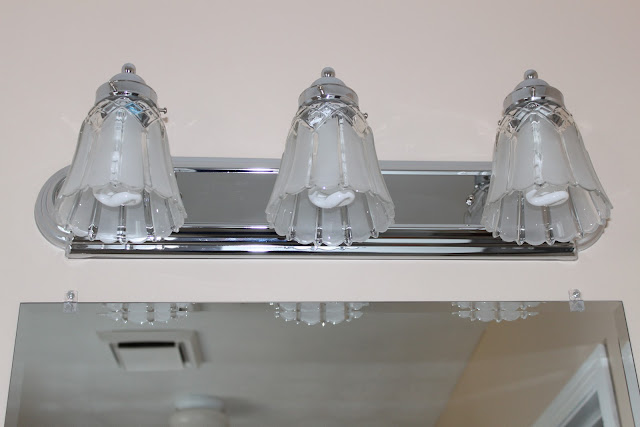 Here are the new light fixtures with energy efficient bulbs. The ceiling fan as you can see in the mirror had yellowed and was painted with a fresh coat of mildew resistant paint along with the ceiling. 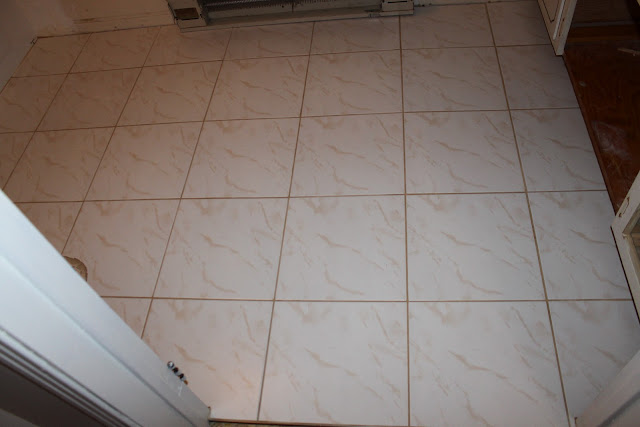 The ceramic tile floor was exactly the same pattern as the Master bathroom that we renovated last year so We could use some of the left over tiles from last year. 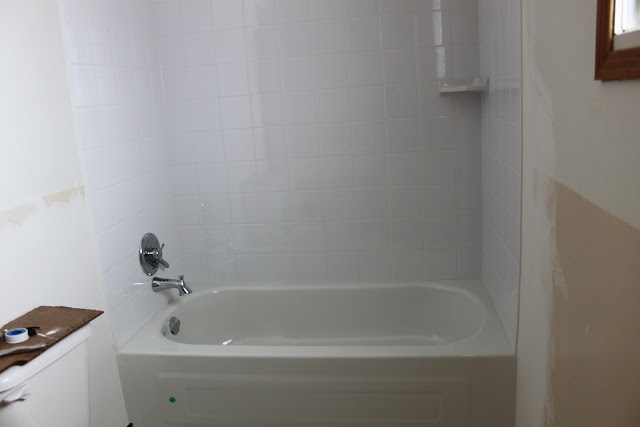 The new steel tub was installed and some insulation put under to keep the water hot in the bath.
The wall was tiled with  thick tiles and a small ceramic corner shelf was added. In this photo, the wall was not yet painted. 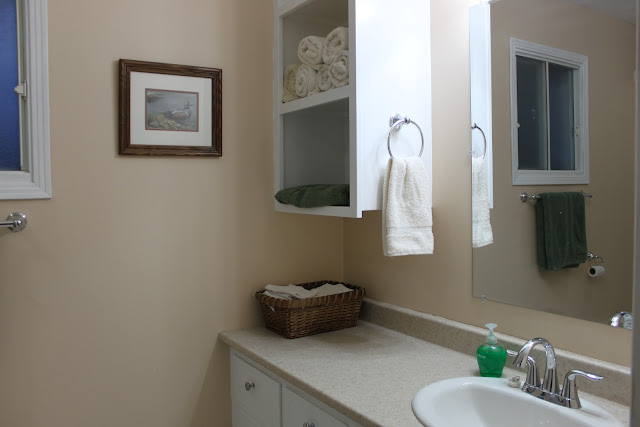 A view of the towel ring,  in the mirror you can see the reflection of the new toilet paper holder that I love so much. You just slip the roll on in a second. Almost time to change the roll... I love the new taps. 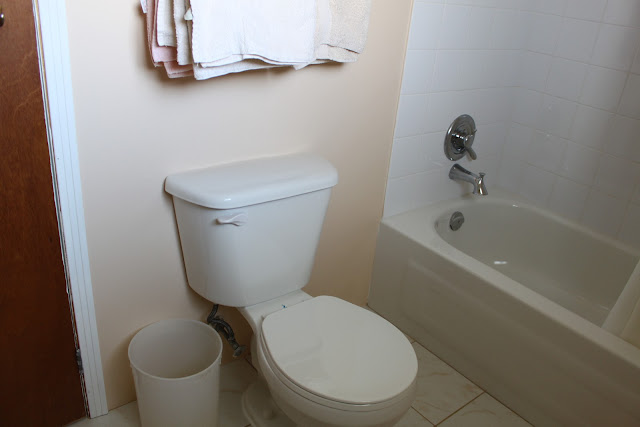 They were supposed to ship a taller toilet but somehow someone forgot to change the order number and this is what they shipped and that's what the guys installed and my husband was OK with it and since  me I'm so short it didn't matter to me either. 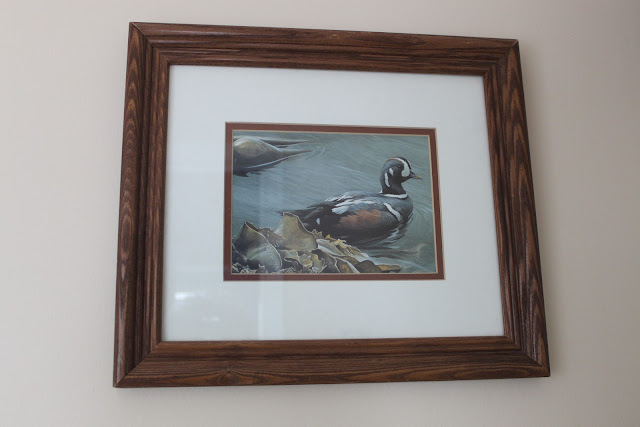 This is a bargain picture with a nice frame and double matt that I got at Value Village for only $3.99 last year. I was glad to find a place for it. 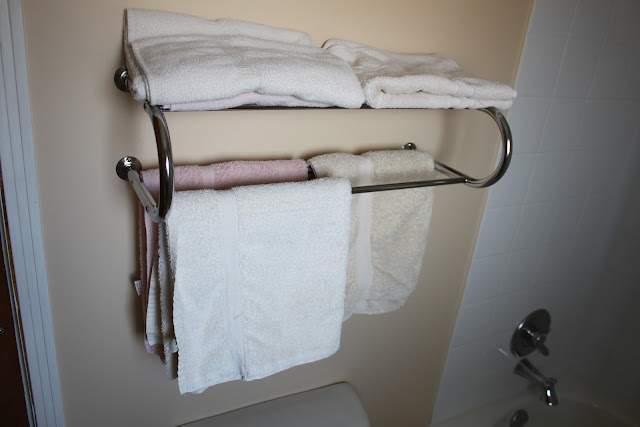 I almost forgot, I've added another towel rack close to the bathtub over the toilet.
Sorry it took me so long to post these pictures. No more mauve bathroom for me.

THanks again for visiting and leaving comments.    JB
Posted by Julia at 9:19 PM 14 comments