This week I continued cleaning out flower beds and cut down the stems of my Peonies right down to the ground. Then on a whim, I decided to dig up those Peonies I'd been wanting to dig up for so long... The weather was summer like but the ground was saturated because of the heavy rain we had the day before. The mud was sticking to my boots, making walking very clumsy.

Had I known I would dig them out, I would have left the stems on to make handling easier.

At long last I dug up my old clumps of Peonies after 38 years in the same spot without being disturbed. It was difficult mowing around the Peonies  because I had three little flowerbeds instead of one continuous one. In 1977, I had just dug three small holes and buried three small pieces of Peony roots that I got from my mother in law. One white and two red. They have bloomed every year since, giving me  fragrance, beauty and abundant joy. 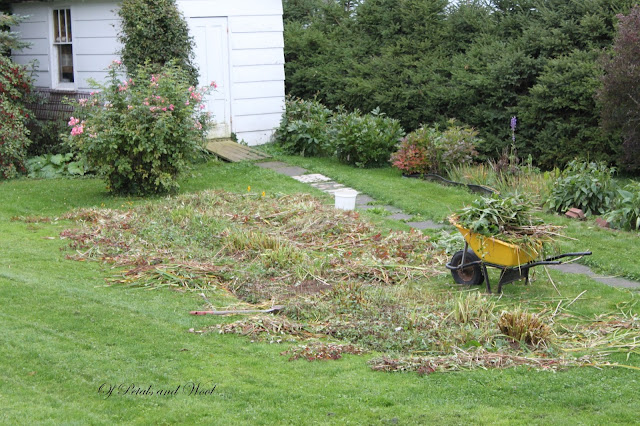 This is an old picture. You can see the three green flowerless little clumps of Peony by the shed in the fall. They were growing right in the lawn. 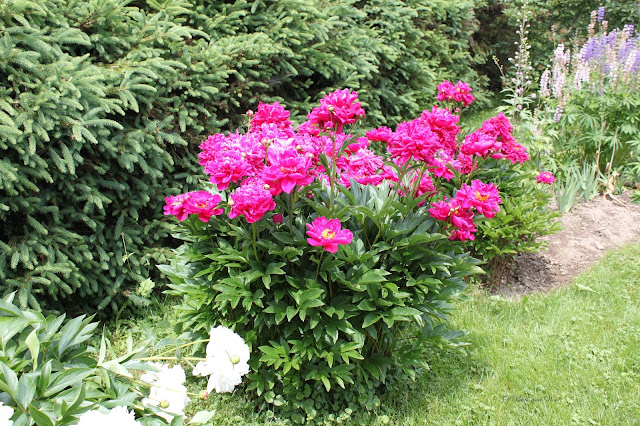 Although it's hard to make out, there are two red peonies side by side. See how the weeds are keeping them company. 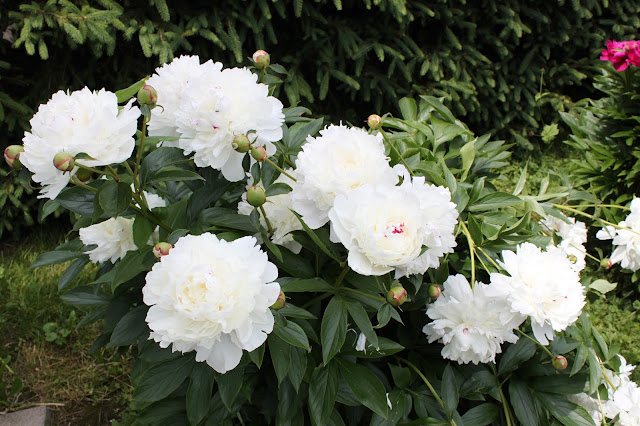 And here is the white Peony. The fragrance is incredible when in bloom. They still bloom every year even though they're not in full sun as they should be...

I was really surprised at the size of the roots under the ground. It was a man job but I decided I was WOman enough to do it myself... The ground was sticky and heavy so I purchased a large bag of potting soil with perlite to lighten it up. It will make weeding a bit easier in the Spring. 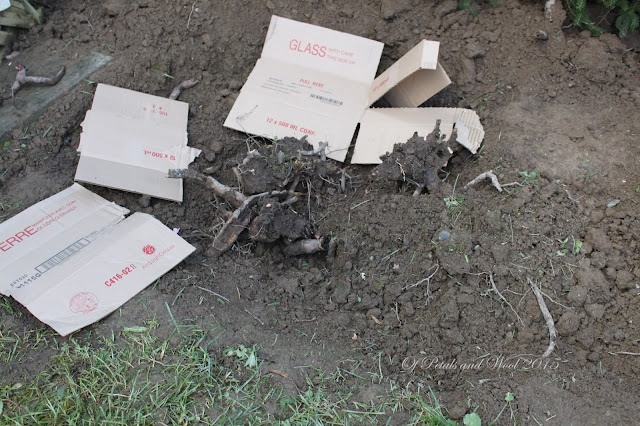 My boots were getting heavy with mud sticking under so I had to use cardboard to walk on while digging. 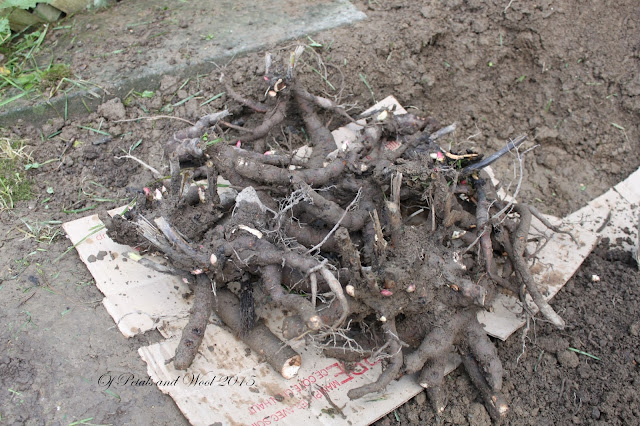 Here are the divisions of the white Peony.  You can see the buds for next year. 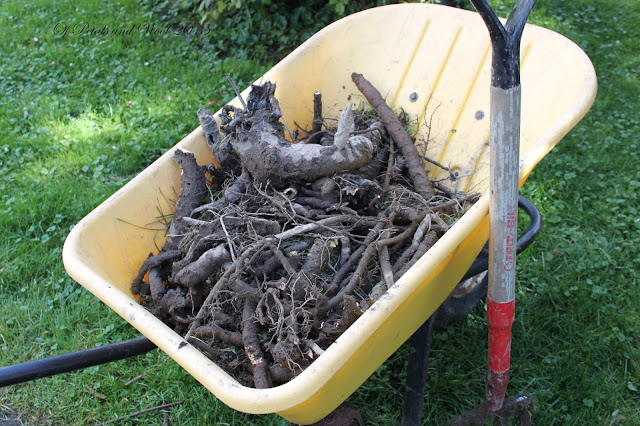 This is the roots that are being discarded from the white Peony. After choosing a few good specimen, I even threw more roots away.

When digging Peonies, it's better to leave the stems on so you can see where they are when you dig them out  and it's easier to grab them by the stems to pull them out.... I don't think that I'll ever  dig these out in another 38 years though... I would be 107 years old. hahaha. 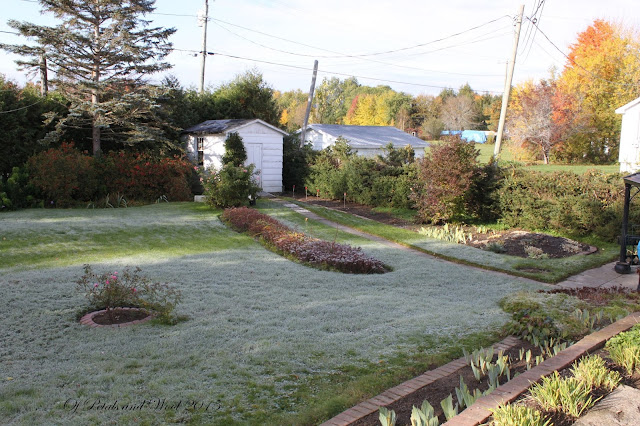 This is a picture of the finished border by the shed this morning. Notice our first heavy frost... I still have some sod to remove by the lilac tree in the middle of the flowerbed. I stuck red reflectors where the peonies are planted. I might stick some tulips in the new dug soil if it stop raining long enough next week before the ground freezes. 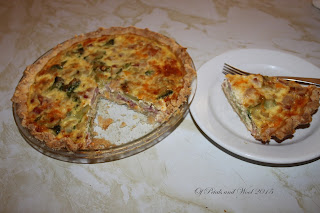 All that hard work made me hungry so here is a nice ham and broccoli quiche, Very yummy. I rolled out some pie dough I had in the fridge and as quick as a wink, my quiche was ready for the oven. I set the timer on and ask George to take it out of the oven when ready. A task he didn't mind doing... 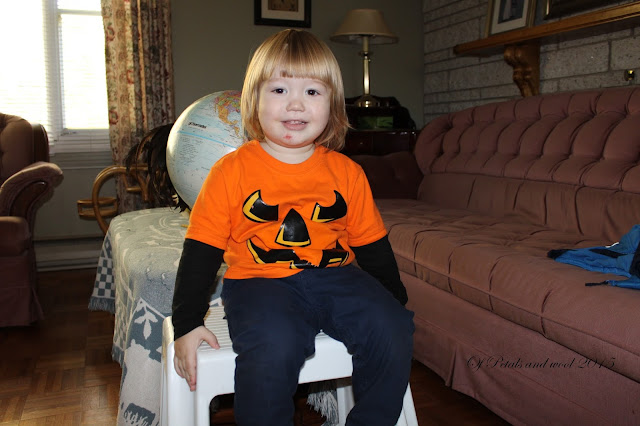 Cypress wanted me to take a photo of him so  he got the step stool and set it up and waited for the camera to flash. Quite the little ham. I love his pumpkin shirt. He wiped out on the rug at his home and got a rug burn on his chin, poor little fella. 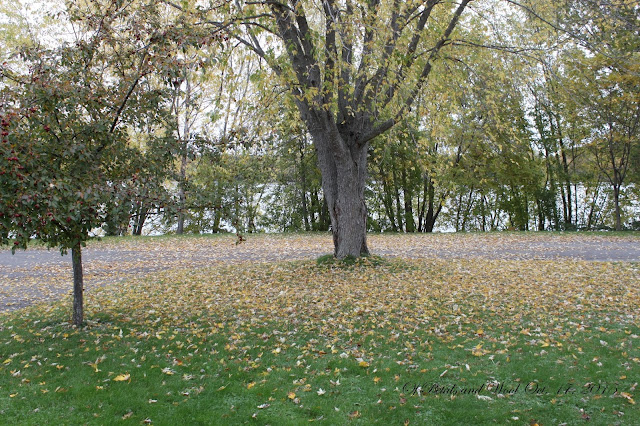 This is my front yard today and now it's raining again. At least it's not snowing.

Today I'm keeping my friends in Bakersfield California in my prayers as they are dealing with closed  out roads and mudslides after heavy rain. Keep safe....

Thanks for visiting and leaving your comments. I always appreciate your point of view.
Have a safe and good weekend.
JB