THE GARDENS HAVE BEEN PRODUCING IN ABUNDANCE THIS YEAR 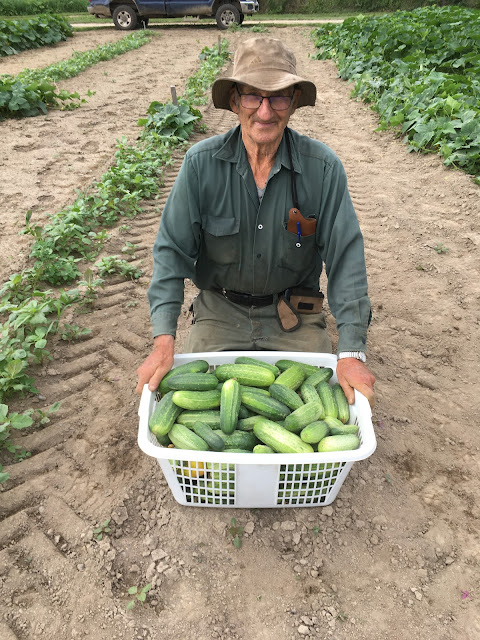 Here's George with our first batch of cucumbers, a big Laundry basket full. It was so heavy that we couldn't carry it very far and he got the skid steer to carry it to the house.

The cucumbers came with a vengeance and I had to pick every other day and I've been pickling non-stop for days. I made Bread n' Butter Pickles, lots of Dill pickles, some Million Dollar Relish, some Pickled Beets, and Lady Ashburnham Pickles. I've made extra for our Church Vegetable and Pickle Market for this fall as a fundraiser. 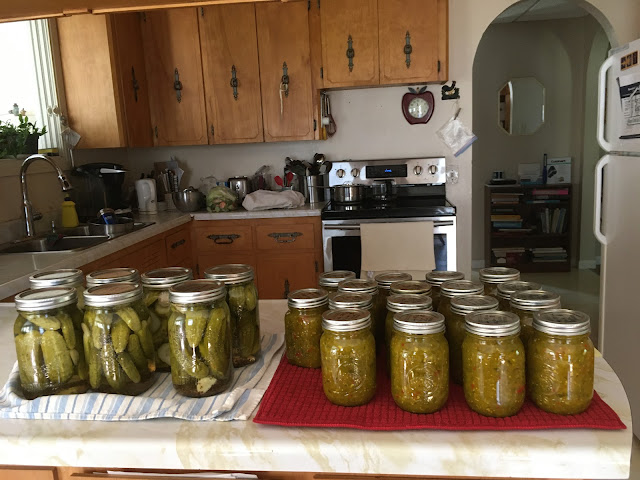 Just a sample of my pickles. I didn't bother to take pictures of all my pickles and preserves this time but I processed 104 jars of pickles, 15 jars of green beans, and 13 jars of pork loins so far.

I froze an amazing amount of broccoli and cauliflower.   I  also froze some chopped-up cabbage for soup in small portions. I still have lots of assorted cabbages in the garden.  We are giving cabbages away. I'll have to learn to make sauerkraut for George. lol...   My new 7sq ft. freezer is almost full already.

Last September, we had an overabundance of beans and I ordered an All-American pressure canner but it only arrived in late September so I didn't use it last year.  I had to freeze the beans and I made Dilly spicy green beans pickles with the rest. This year, the deers ate most of the beans but I still have some in my son, Vaughan's garden.

Already, I canned some pork loins and several batches of green beans in my new pressure canner.  I love my big new canner. I was a little worried about using it the first time but after watching a Youtube video, it was easy and a joy to use.  It sure has been fun preserving all that food but an amazing amount of work too. 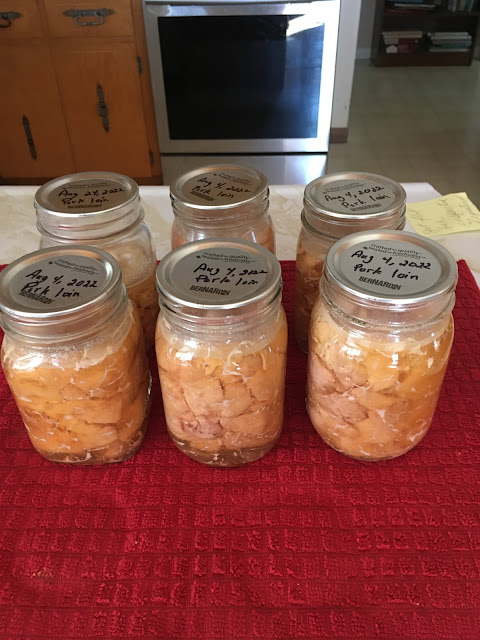 The pork loins were on special and this is my first batch. I went back and got some more and made another 6 bottles.

I had to work at another funeral reception on Tuesday so I did get a break from preserving food. Wednesday I weeded my flowerbeds that were being invaded by weeds full of seeds that I couldn't ignore.  Some vine weeds came up in the straw and I suspect the seeds were in the straw mulch. The war on weeds continues and that'd normal, even with mulch. I'll continue using straw mulch anyway. Not all my beds were mulched as I just didn't have time because of adverse weather.

There is a feeling of Autumn in the air already and my Hydrangea is already changing color. I have lots of flower pictures but this post is already long enough. What the heck, a picture of one of my Asiatic Lily that was eaten by the deers last year, survived this year by using some wire-fanned supports that were bought at the dollar store. Not a great picture to show the fanned wire support but Lauren wanted to know what kind of support I used.

Thanks for reading my blog and leaving a comment.