I'M SO GLAD IT'S RAINING TODAY.

It's raining today and I'm so glad because the ground was so dry, making it difficult to weed and I needed a day to run errands in town and pay my car insurance, get some banking done, get grocery and to post on my blog and a good day to rest...

I've been doing much of the same,  weeding and repairing and if the weeds just could stop from coming back, it would be great. Where I used mulch, it keeps them at bay but I don't have enough mulch for all the beds.

I still find time to do a bit of baking but not every day. 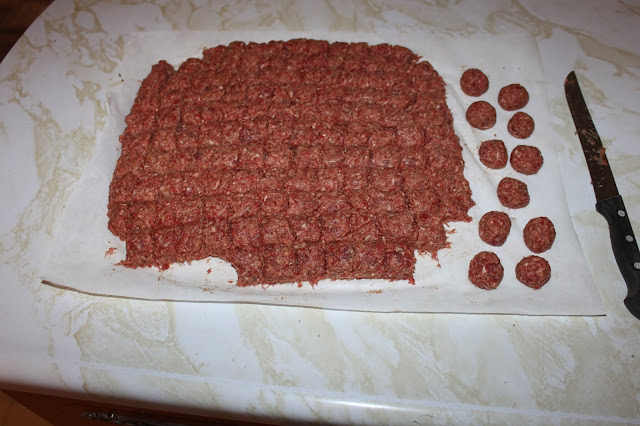 I made a large batch meatballs and flattened the mixture on a large piece of parchment paper and cut them into small squares with a knife. A serrated knife doesn't cut well I found out. Then I roll them to about an inch balls. 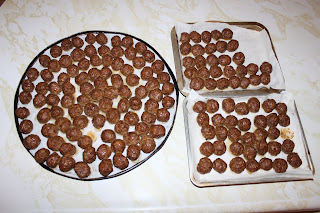 I baked them in the oven and after they cooled I packaged them in portions and put them in the freezer. When I need some in a hurry, they are popped in the toaster oven to warm up and they are ready in minutes. 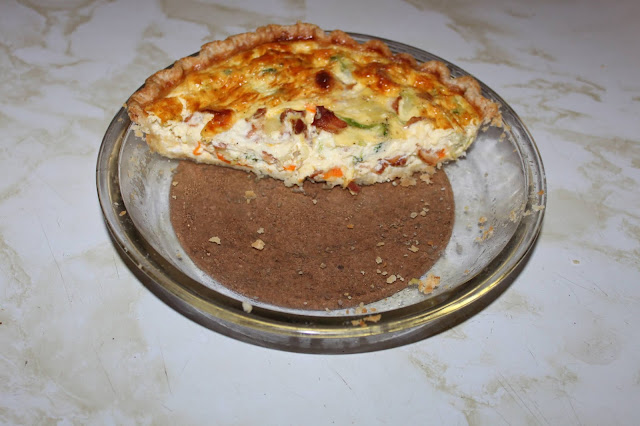 I guess we were hungry. I forgot to take a photo before cutting it. I bake pie shells and freeze them and use them when I need them.  It doesn't take long to make a quiche. Today we had homemade pepperoni pizza but no photo as the men arrived early for lunch. It was raining so hard, they were hungry and a bit wet. 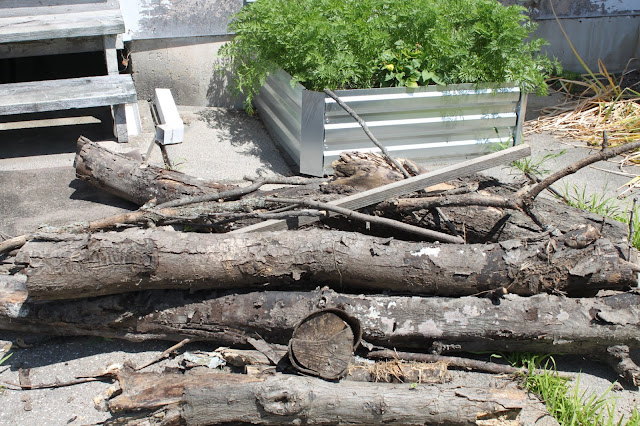 These are big pieces of logs that were in the hedge and I managed to move them there to be cut with a  chainsaw. They were too heavy to lift when they were wet but they have dried in this hot weather.  My husband will cut them when he has time. Can you see my Yaya carrots growing in the small raised bed at the top of the picture? We had some in a salad a few days ago and they were so flavorful. I save spent coffee ground and sprinkle some around the stems to keep the rust fly away so they won't get wormy. 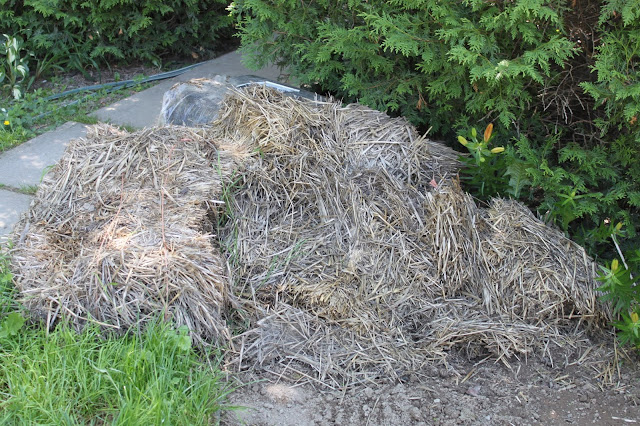 One of these straw bales floated as far away as the barn in the flood and I brought it back with a wheelbarrow after it dried up enough so I could lift it in the wheelbarrow. I still have to recover another one that settled in the treed area in the back.  On Friday, I finished weeding the long border by the hedge and replaced some lost soil and spread the straw under thorny rose bushes to keep moisture in and weeds out. 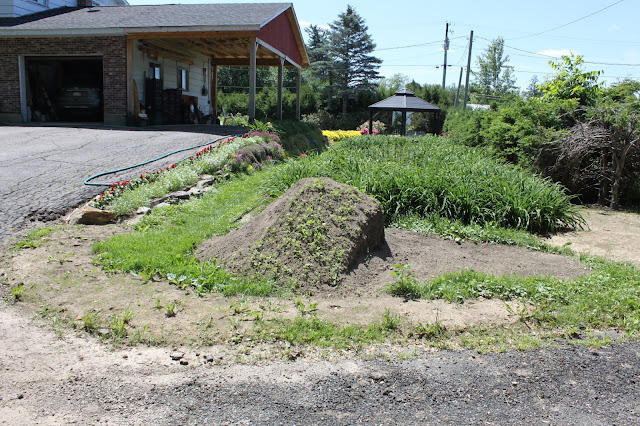 I know that this doesn't look like much but close up, this was a huge pile of compost and soil that I wheelbarrowed from my flower beds all the way by the shed and I've used most of it to replace where the soil has washed away, here and there.  And that's what's left of it but I'm not done yet... It was all hauled out of my flower garden by the shed. I had another pile but that one has been shoveled in where the soil needed to be replaced. It's a slow process because I have to weed first, replace the lost soil before I can plant or reseed and I can only work on one area at a time. plant. 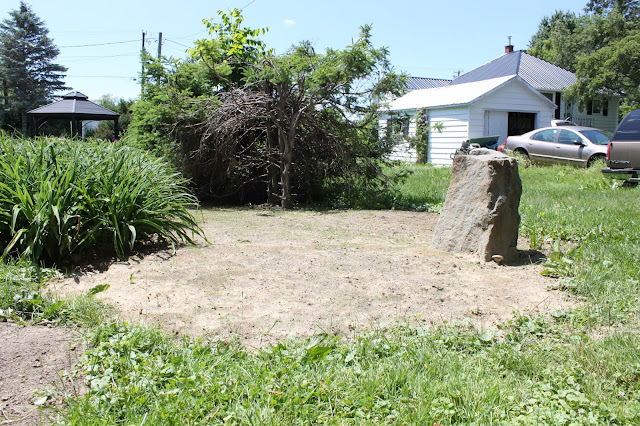 Right next to the pile of compost and soil you just saw, I've fixed the big hole left from the flood damage and reseeded that part of the lawn by the road where the currents were so strong during the flood. The water was up to about one inch of the top of that rock. The grass is just starting to grow and has to be watered morning and evening in this heat. 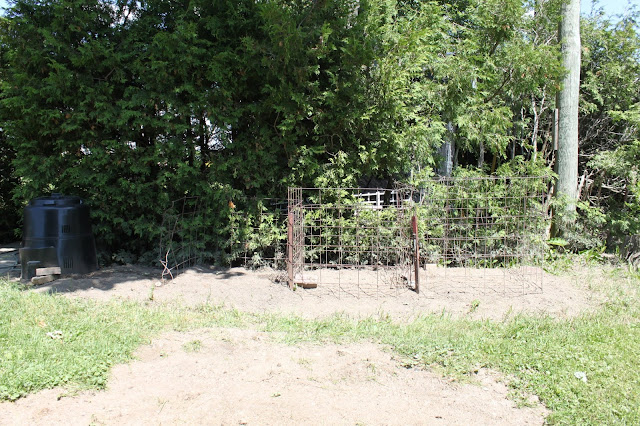 This is the place where my compost piles used to be. I pulled all that tall couch grass and removed the roots and planted some pickling cucumbers,  next to the hedge, in full sun.  They are starting to grow...

At the bottom of the photo, I also removed a big piece of black plastic that was buried under the turf, on which we had put bulk lime for the lawn some years ago and also some cedar branch mulch when we clipped our cedar hedge but over the years, the weeds grew over the lime and the mulch and became part of a weedy lawn that we mowed.

I've been wanting to remove the plastic for quite a while but I never seem to get to it as something more pressing comes up. I shoveled the lime in pails to use on the lawn and reseeded the area, now I'm waiting for the grass to grow again. It was heavier work than I had thought and I did a lot of sweating but I'm happy now that it's finally off my list. 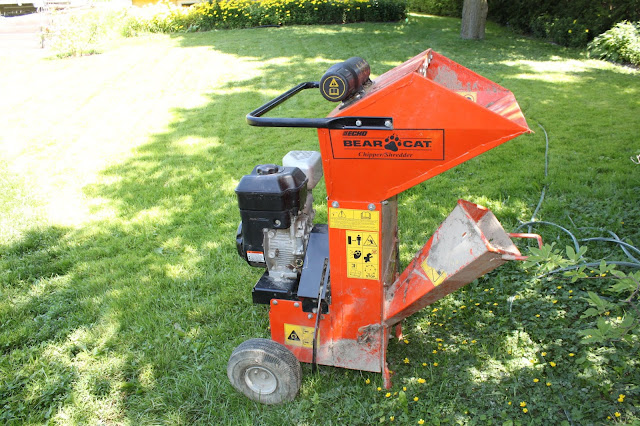 This is my wood chipper that toppled over in the flood and now the motor will have to be repaired or replaced. There is a flat tire on the other side and it may have caused it to topple over. A mechanic friend of my husband is looking into it but there's no rush on this. Water got in the oil. Not a good thing. 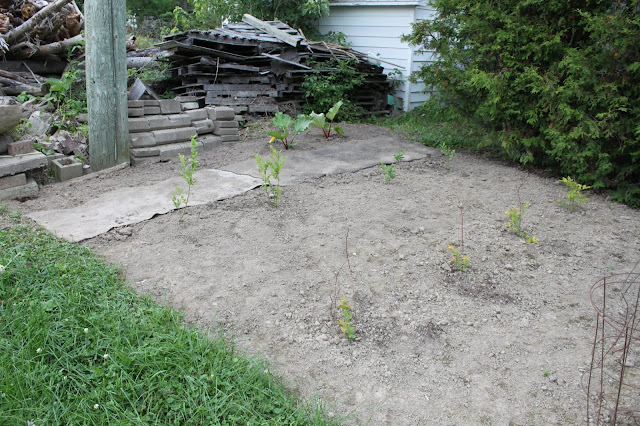 This is the section that I reclaimed by weeding tall Burdocks, Angelica, Couch Grass and Dandelion, Creeping Charlies and Butterfly Weed and planted eight blueberry bushes. They are still very small.
I need to prune the dead branches. I also planted two types of rhubarbs, one called Canada Red and the other is called German Wine. I have put some of the soil and compost that was displaced in the flood in this area as the soil was quite compacted. 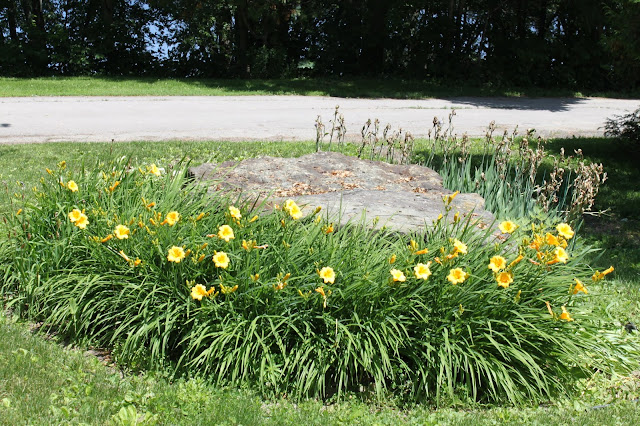 I've been deadheading my many tall bearded irises, here and in the back but as you can see, I took the photo before I deadheaded these and weeded especially on the other side.  Now we can see the brick border. 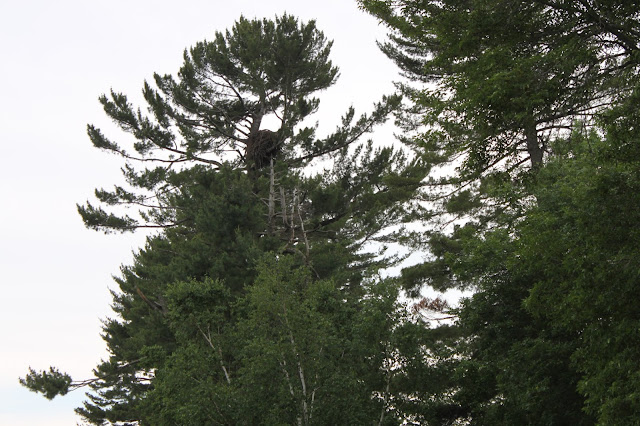 We are so lucky to have a couple of resident eagles near our farm. They have been here for a long time. They had their babies and I'm glad that they have rebuilt their nest after hurricane Arthur destroyed their tree and nest in July 2014. I wish I had more time to take photos of them. 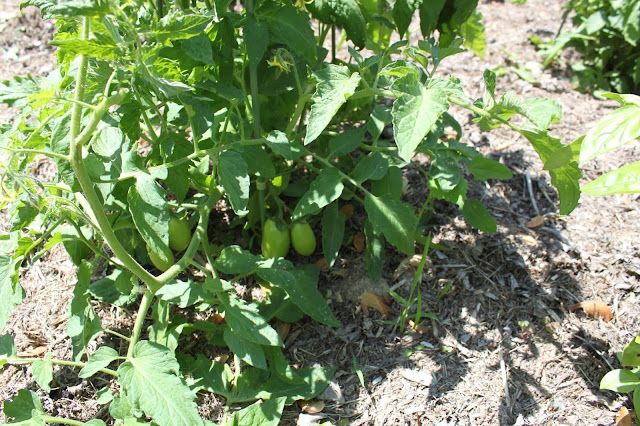 The Roma tomatoes are starting to appear on the plants. The plants were mulched with daylily mulch and so far it's working well to keep the weeds at bay. 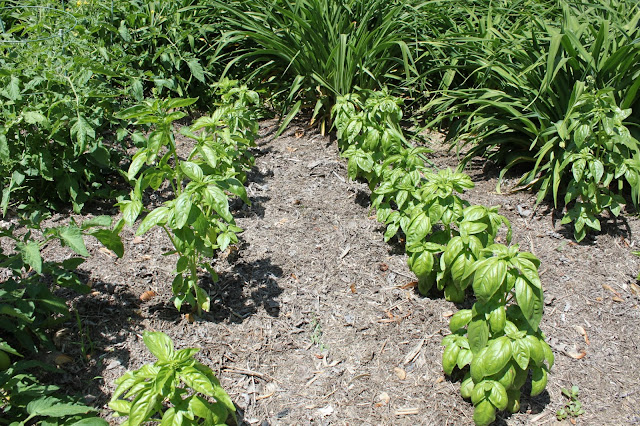 Mr. Basil is doing well,  growing next to the tomatoes in the daylily flowerbed. 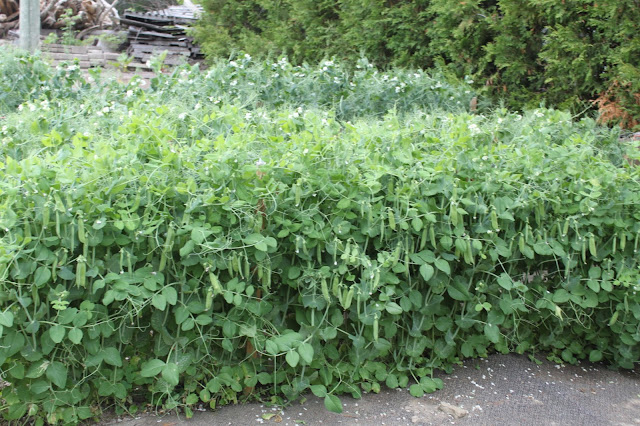 We have been eating peas. These are the early ones. 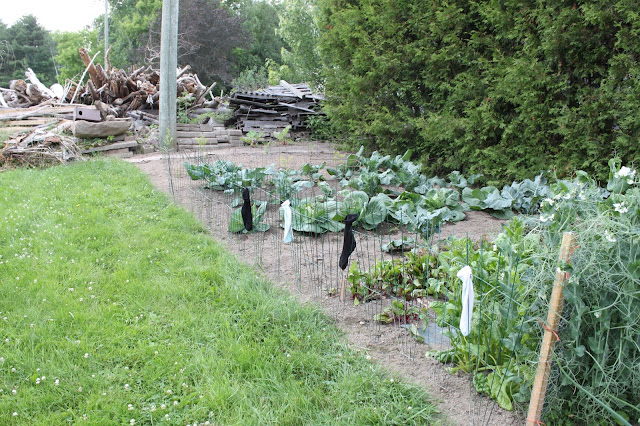 We have had deers coming in the garden and munching on my peas, beets and knocking down my broccoli and other brassicas. At first, I thought it was cutworms but when I dug them out, I didn't find any worms, except on one plant, I found a very tiny maggot but it wasn't a cutworm. I quickly put up some supports to make some kind of barrier and hung up some old socks and poured some Lever 2000 scented shower gel and it's doing the trick. So far, they have not returned to the garden. Every night, I go and pout some shower gel on the socks to keep them away. 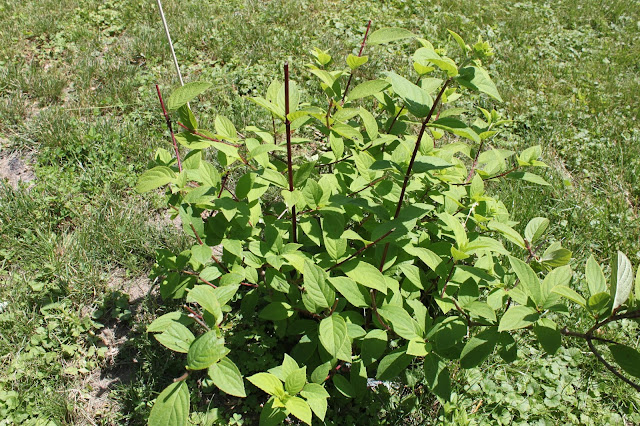 The deers also chewed up the tips of the budding hydrangea on the front lawn. So far they have only chewed on one bush and left the other one untouched. 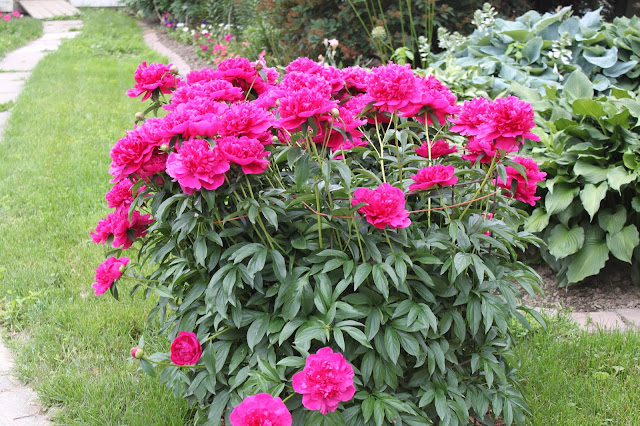 Now for some pretties. I'm lucky they bloomed at all because they had about 6 inches of soil over them. Peonies that are buried too deep will not bloom. I removed as much soil as carefully as I could and used a water hose to remove the soil closer to the buds. 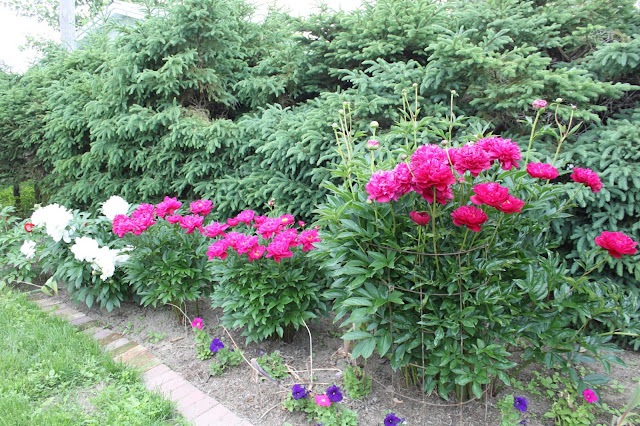 These were the one I replanted last year. They were also buried with about 6 inches of soil and compost.  The tall one on the right was self-seeded and there are two different types in there. One has still not bloomed. They are much taller than the ones on the left but still very pretty. 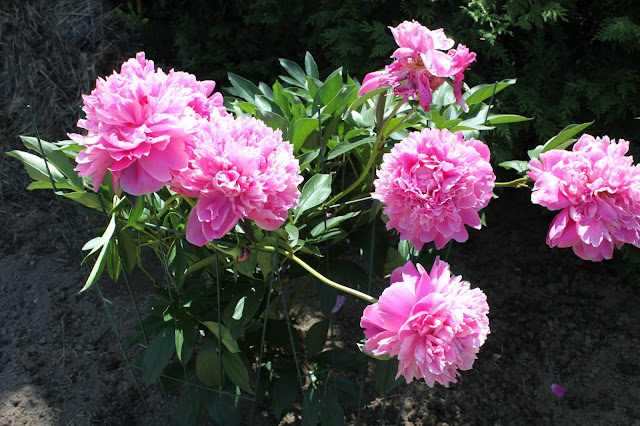 This one will have to be dug up in the fall and moved as the sprawling white rose bush is moving in its space and shading it from the sun. So it didn't get many blossoms this summer. 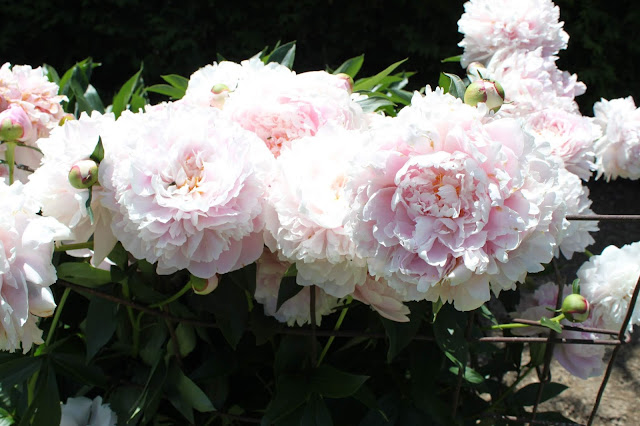 This one had lots of blossoms but not enough support to hold the heavy blooms from falling. 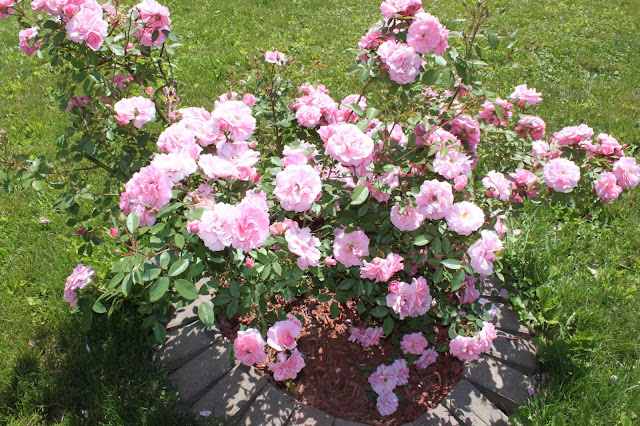 One of my rosebushes planted in the memory of my parents. 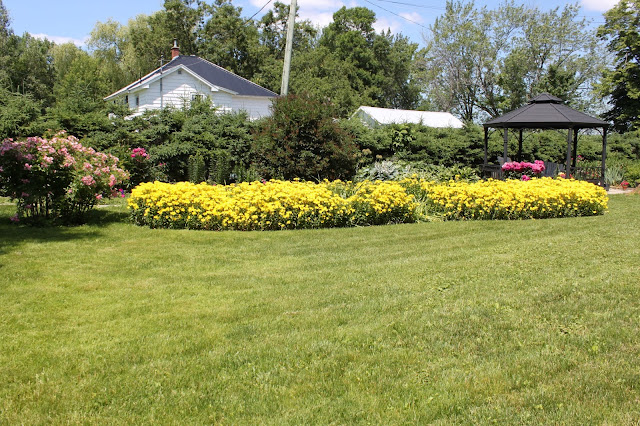 The Sundrop flowers lighting that part of the yard. It's 9:52 pm and still raining.

Again, sorry for the many photos and long post. Thanks for visiting and leaving a comment.  I may have offended some bloggers by mentioning that I get many"lurkers" who visit but don't leave comments and I hope I didn't offend any with that comment. It's just that I have been getting something like 193, 148, 134  visits each post and sometimes more, but not a lot of comments in ratio to the visits. I just wondered why they like to visit my blog but don't like to leave comments. I really don't mind people who visit without leaving comments.
Stay safe and enjoy the summer. Keep the people of southern California in your prayers. They are still having so many aftershocks and are fearing a bigger earthquake at any time.
Hugs, Julia