I've noticed that since I've started blogging on August 2, 2010 a lot of the bloggers are no longer blogging every day and it seems that they post less and less just like me, others blog once in a blue moon and others have stopped blogging all together and I wonder why but I know life happens along the way... I keep checking everyone's blog and comment even if I don't post just  because I feel like you are my friends.

For me, I feel too tired at the end of the day to bother and I put it off and then I have so much stuff to blog about that I can't make up my mind what to choose so I don't blog. In the summer, I do pretty much the same from year to year, weed,  mow the lawn, feed calves, plant gardens, office work, meals, run errands and do housework so it's kind of repetitious. I don't have time to run around with a heavy camera around my neck and I don't have a Smart phone to take carry with me to take those awesome shots that happens when you least expect it.

Some of you have been after me to post so here it is today. For dear Kezzie all the way across the ocean, here are photos of  my last two little calves. 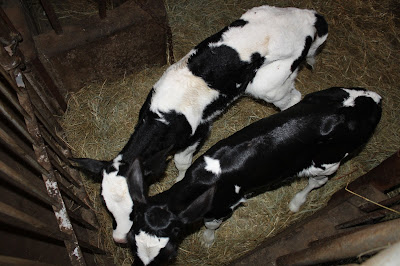 An overhead shot of the two of them. The shiny black one is a heifer calf named Lemmon and the other one is a bull calf that we don't name as he is sold. He looks small but he is about 130 pounds and very strong. 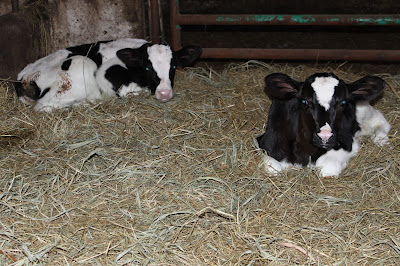 I tried to take a decent photo of the two of them standing and they just wouldn't stay still two second. After they were fed, they laid down and I got this shot. Anyone who has tried to take photographs of curious calves can tell you it's not easy. It takes another person to distract them while the other takes their pictures. 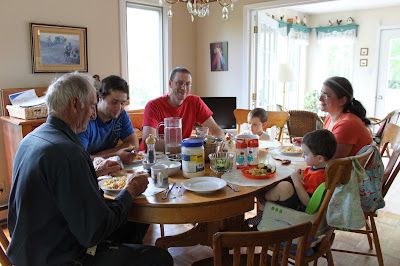 Daniel is sitting in his booster seat next to mama while James is sitting on the end. 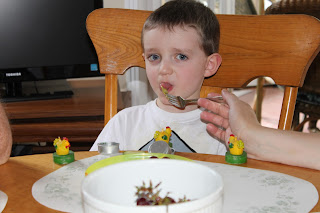 James is trying out some pasta salad. It doesn't seen to be to his liking... 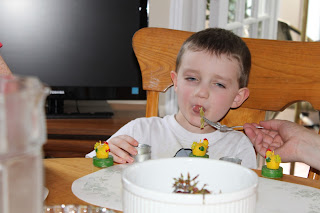 He said  he didn't like it before even trying but he must at least do the taste test. 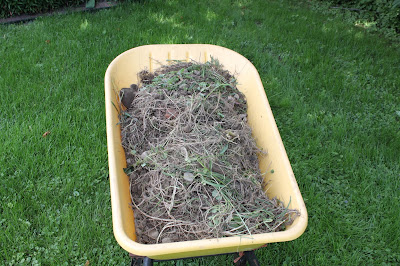 I got many wheelbarrowful of these kind of weeds on the edges of the back vegetable garden. These long roots runs under the ground and spread and have to be totally dug out to remove them. If you cut them up they will roots everywhere. 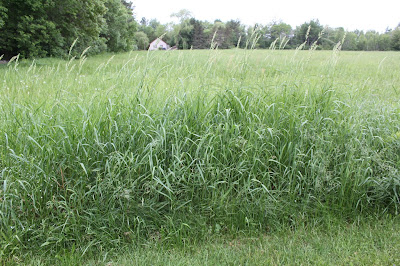 This is what they look like where it grows  in the hayfield  along beside of the garden. 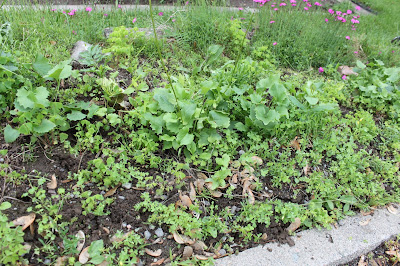 Weeds along the long bed by the driveway.  Mostly wood sorrel and so hard to get rid of. 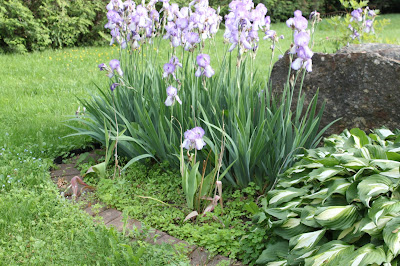 More weeds around the big rock 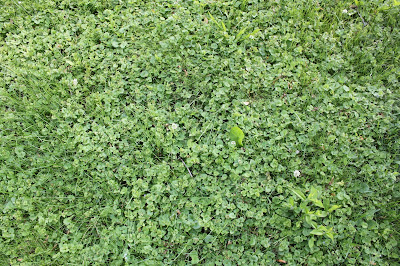 Creeping Charlie weeds have taken over my my lawn. 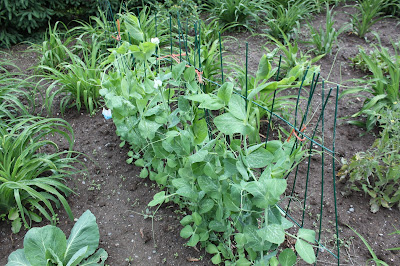 A little row of snowpeas for stir frys. 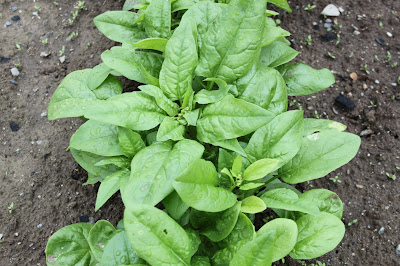 Some spinach that is ready to be picked 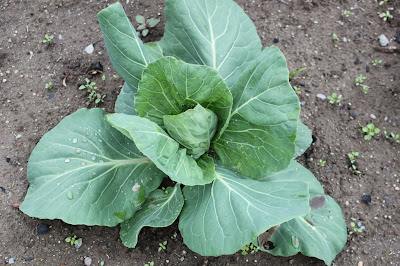 Early cabbage and some chickweeds sprouting again after all the rain. 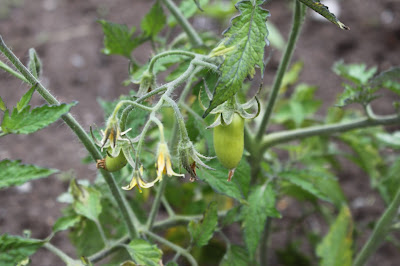 Some Roma tomatoes starting to grow. 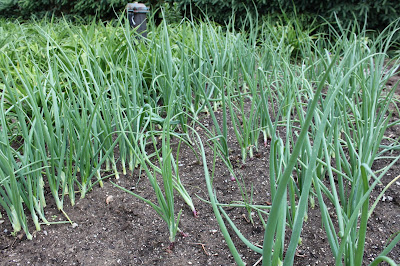 A row of Spanish onion, a row of red onions and a row of yellow  onions 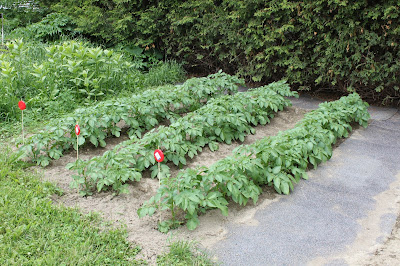 My little potato patch is doing really well after digging out those weeds with long white roots. Notice some Milkweeds have been left for butterflies on the left. 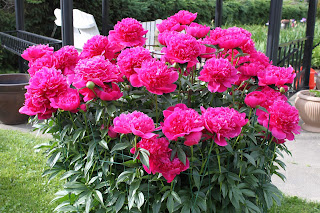 My peonies are starting to bloom 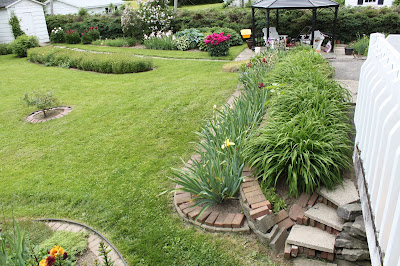 Some peonies way out by the shed have also started to bloom.

Hopefully I'll be posting again this week. I have more family pictures and I missed some really good shots while being preoccupied in preparing meals.
Thanks for stopping by.
JB

I THINK THAT I'VE TAKEN ROOT IN THE GARDEN.

Hello everyone and thanks so much for your patience, your wonderful comments and for all the emails. It feels good to be missed but I've been on my knees in the garden for so long that I think I took root in the damp ground. I must be well grounded by now. I was so very tired yesterday as I walked to the barn in muggy weather that I felt that the only thing that kept me up were my boots.  As I thought this, I started to giggle to myself. hehe... 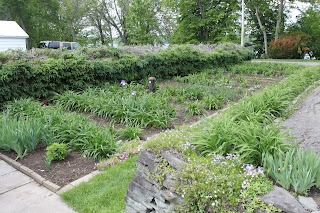 It took me 3 days of weeding to get this big garden done. 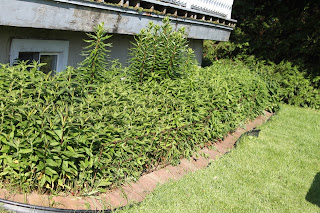 This one was so full of tall sun drop plants that i only pulled the tall grass on the edge because it was getting into seed head. 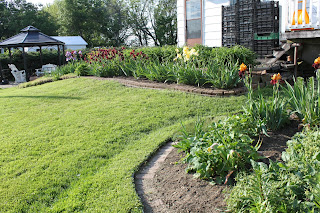 The lower portion of this double bed (at the top) is done as well as the semi-circular on on the left are weeded. 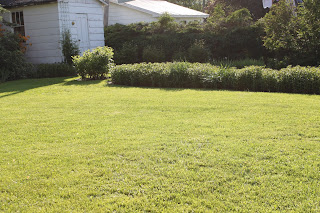 Sorry about the bad lighting in late afternoon but that's another long flowerbed done. 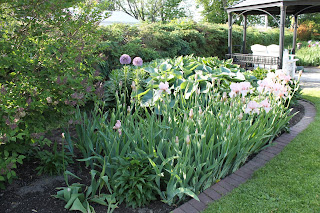 This whole garden is also done but I only show about half here. 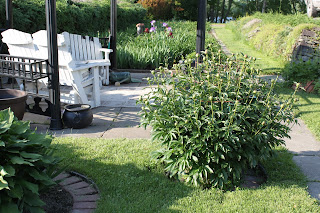 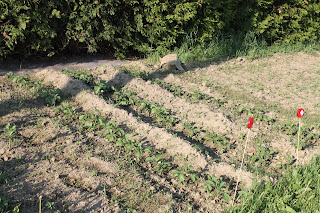 These are my three little rows of potatoes that are full of weeds and it was weeded today and my potatoes were all hoed up. 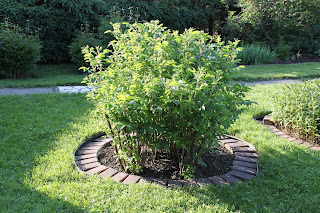 My rosebush was done also. I have many flower pictures but it will be for another time. 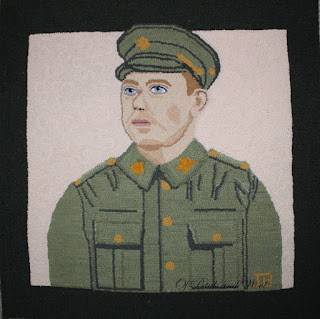 I finished hooking my Grandfather rug a while back and as I hooked at night I couldn't see the different shade of wool as they looked exactly the same shade to me but when I took a photo in day light I was horrified that it didn't matched the other side.  I may have to pull those "S"s and hook them in the same shade of the left background if I still have some left but it will have to wait... 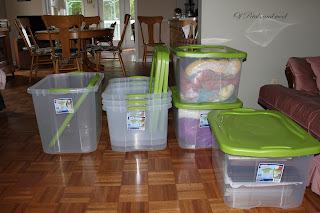 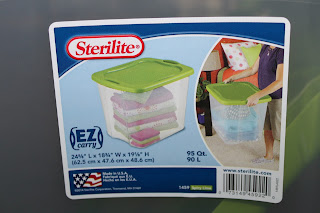 I wanted to put some of my granddaughter Jordyn winter clothes into storage in my basement and I bagged up the clothes and started to put them into totes I purchased at Walmart. I realized that I had one  tote that was bigger than the others and I checked on my receipt and realized that they had charged me for all 7 tall totes. I took photos of the bins and the labels and took my camera to Walmart and they fixed the error in a few minutes and I got my debit account credited. I was rushing as usual to get home on time to get to the barn.

It has been raining every other day and I been busy de-cluttering the spare bedroom and fixing  a bunch of work pants for my husband and myself, and hemming some pants for myself.
There is still so much to do and it will probably never get all done.

I got a new heifer calf today and she was named Lemmon by Victoria, my son's girlfriend. She came to help me care for the calves as I needed to get off early to attend a social and I gave her the honor of naming the calf.

You all mean a lot to me even though  I didn't had time to visit everyone today, but I'll make my rounds during my frequents mini breaks during the day in the next few days.