IT'S OBVIOUS, I'VE BEEN DRAGGING MY FEET ALL WINTER

When too much time elapses between post, I never know where to begin. I've noticed although I'm not getting many comments on my last post although I'm getting a lot of visitors who never comment. Is it because my blog is getting boring? If so, I don't blame you. I'll admit, my posts have been rather boring even to myself, but I still would like a tiny comment like  "Hello Julia".🙂

I don't have lots going on, I'm still recuperating from a nasty fall on the ice while working at the farm. I fell flat on my belly, hurting my rib cage and it interferes with my sleep so I don't get much done at home but I'm on the mend slowly.

There was a thin layer of freshly fallen snow on top of the ice. I was wearing my ice grippers and carrying a pail with 3 bottles of milk in hot water for my small calf and the tip of my ice grippers hit a small bump of ice, I lost my balance and down I came, just missing smashing my face and eyeglasses on the hard ice. I had snow all over my glasses. I got all wet from the splashing hot water and went to feed my calves. Thank goodness it wasn't cold that afternoon and that I didn't get burned either.

On a happier note, my daughter Christine and her family are back from a winter vacation and cruise. She sent me some photos of the boys enjoying Walt Disney characters. 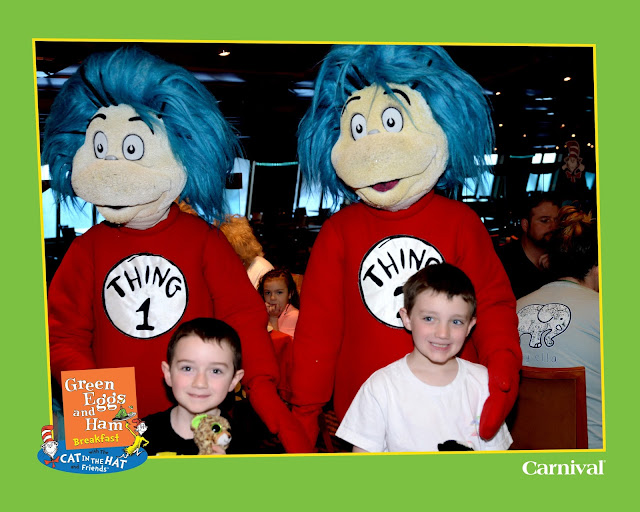 The boys actually had green eggs and ham for breakfast.  Look at those smiles of contentement... 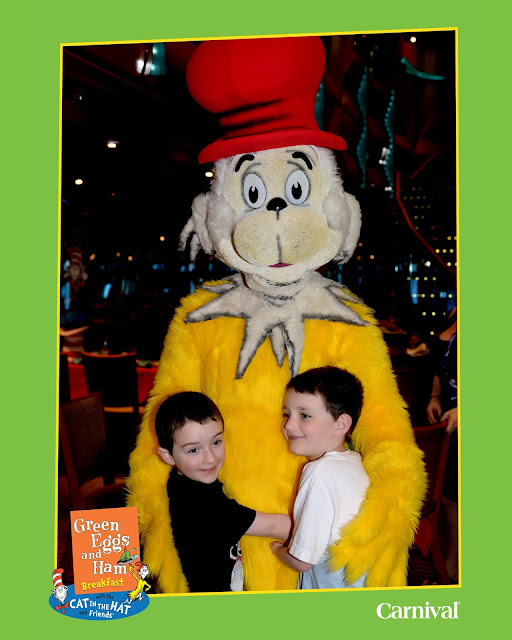 They really enjoyed hugging these Dr. Suesses characters, He looks so cuddly... 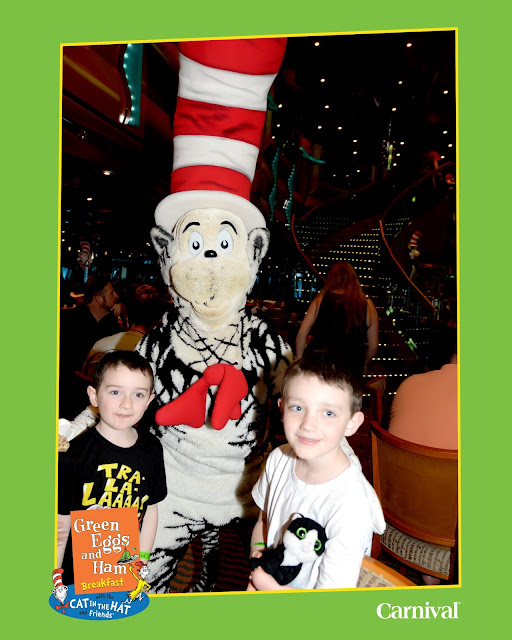 The cool Cat In The Hat 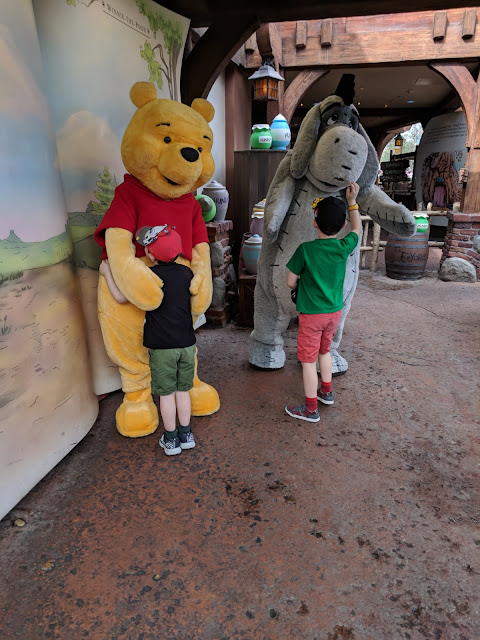 More cuddly characters to make friends with, Winnie The Pooh and Eeyore 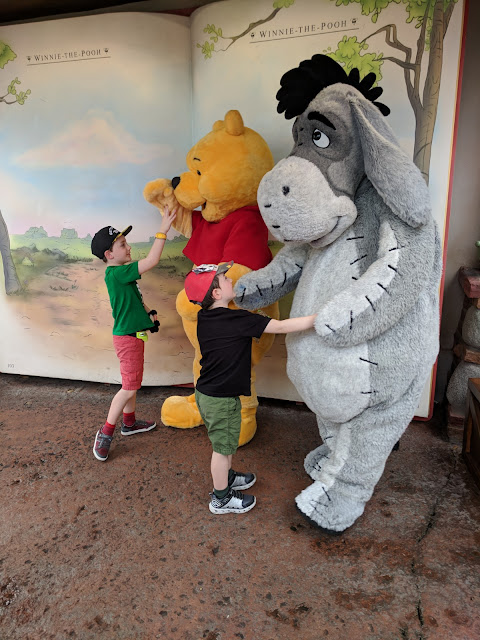 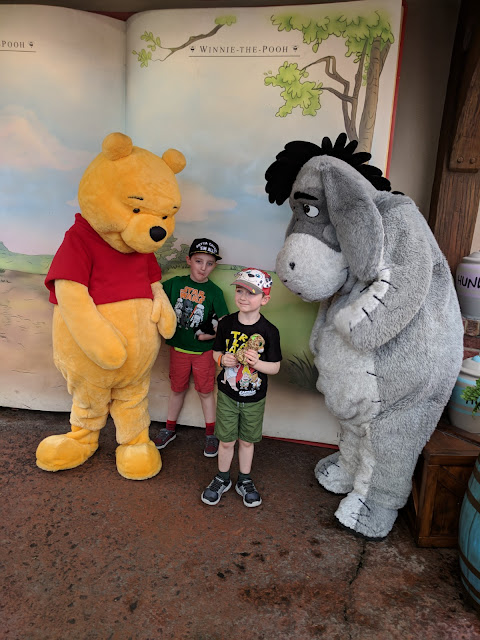 It looks like they had their dream come true, meeting with their favorite Walt Disney book characters.

Now to show you what I've been playing with... For those who don't hook rugs, this may be boring but dyeing wool this way always brings some surprises. 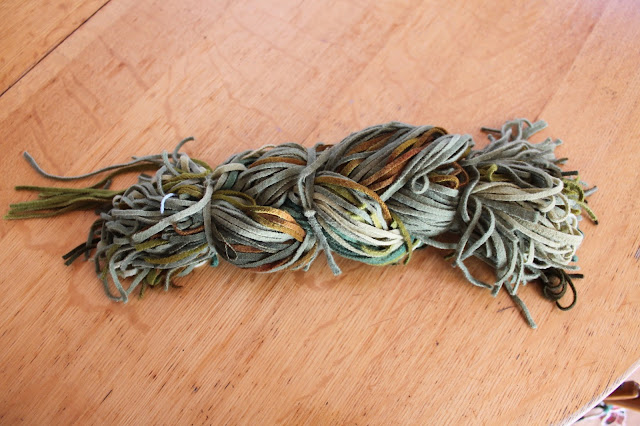 I tried an experiment to marbleized some wool worms to hook some grass on my Rock-A-Bye-Baby challenge rug using leftover assorted green wool worms. I tied the top of the worms and braided it and tied it several places. Put it in the pot with water without pre-soaking it following directions. It asked either use Tide powder or Borax.  I didn't have Tide powder so I tried Borax. 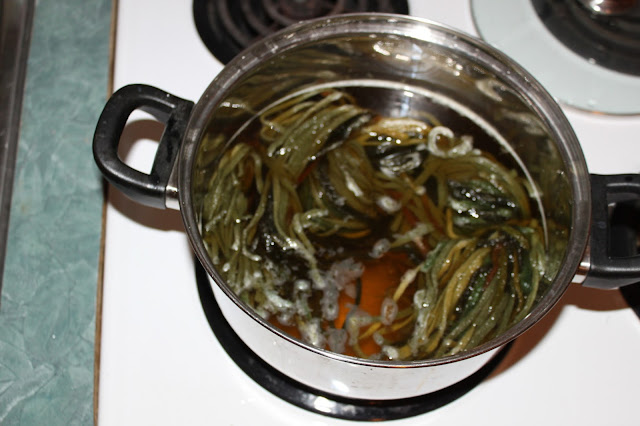 You can see the color bleeding out of the wool 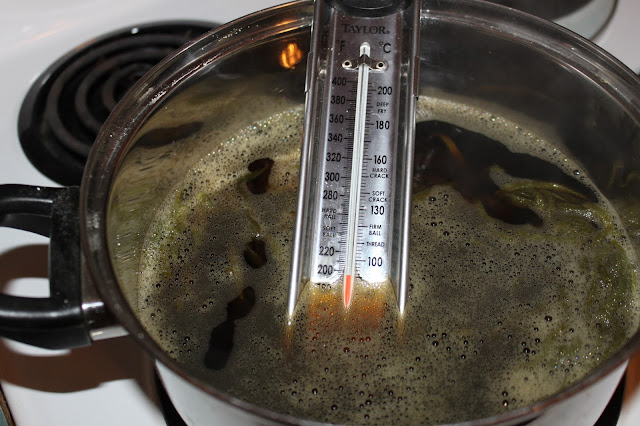 I used a candy thermometer I bought at Walmart a while back and simmered at 195 ℉ for 15 minutes and turned the wool over and simmered for another 15 minutes. Then I added about 1/2 a cup of vinegar and simmered again for about 30 minutes. Care should be taken to not boil the wool as it may felt the wool and making it too thick to hook with. I turned the heat off and let the wool sit overnight as it was a bit late. The next morning I rinsed the wool well and squeezed the water out and blotted the excess moisture with an old towel and hung them on an old fridge door that doesn't work anymore.

For some reason, one color of the wool turned out brittle and had to be thrown away but the rest was fine. I won't be using Borax again. The colors don't show well in these photos but there is a marbleized effect on  the wool worms. 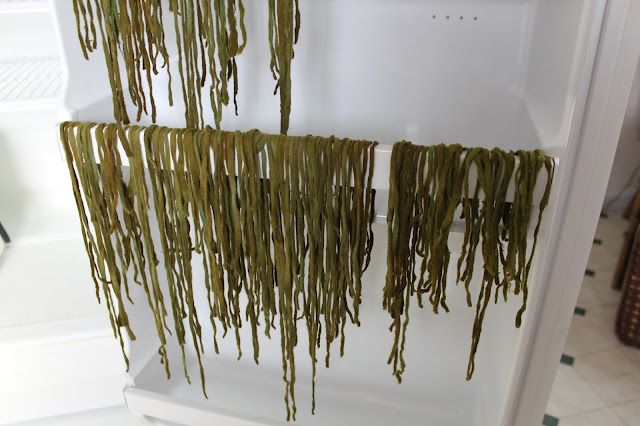 More marbleizing experiment using the same method but rolling and twisting different color wool pieces on top of each other, using dark and light and a neutral color like camel and laying some extra leftover wool worms in the middle. 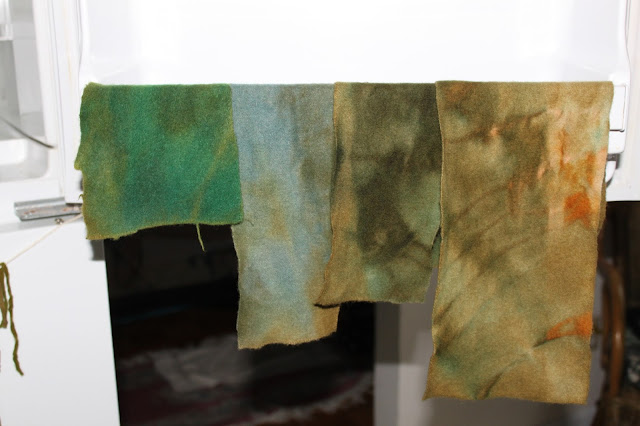 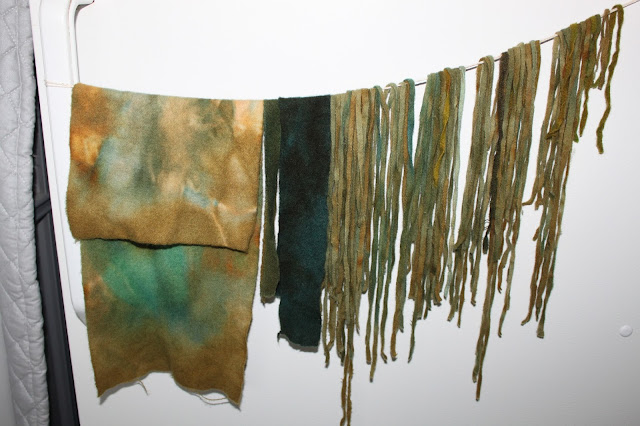 Now if I could just get off the computer and hook a bit on my rug I might make some progress.
Thanks for stopping by and please leave a comment. I hope the weather is sunny where you are. Here it's been a beautiful springy, sunny day with a few clouds. Spring is only a little over 22 days to spring.