SINCE I HAVE NO PETALS, BRACTS WILL DO FOR NOW

I always wonder how long my blogger friends keep their Poinsettias after the holidays.  Although I haven't bought a poinsettia in years, I have a collection at my house. For four years in a row at Christmas I get a big one from the University students brothers who have been part time employees and whom I've been feeding when ever they worked at our farm.

I keep them because they bring some color to cheer me up in the winter.  The church which I attend also give poinsettias for adoption after Epiphany, January 6th.  I adopted a small one last year and a bigger one this year.  I've lost a couple through neglect because the pot was too small and they dried out last year but I still have 6.

I know that some people get rid of theirs after the Holidays but I just can't throw mine out even if the leaves have completely fallen off. They usually leaf out with a little care and sunshine. 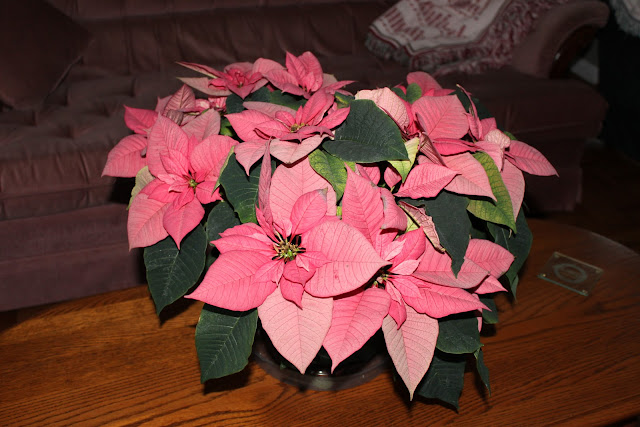 This one I got this Christmas 2011, from Dwyer, our part time employee. It's still healthy enough except some leaves show that it could use some fertilizer or maybe more sun. It's in the living room on the North side. 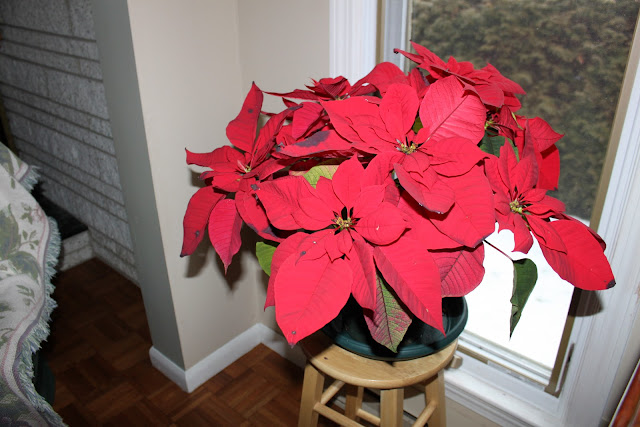 This one I adopted from the church after the Epiphany, Jan  2012. It had suffered a bit of cold in the transport and the bracts shows some dried spots. It quite a large plant. 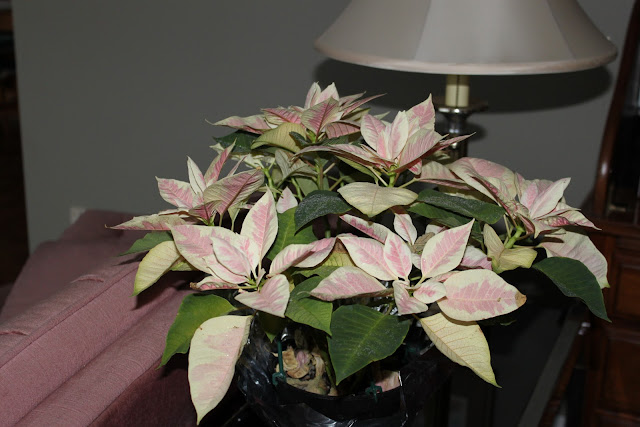 This pale poinsettia actually has a white stem in the back which is hidden from view. I won this one as a door prize at a Christmas  party Christmas 2011. 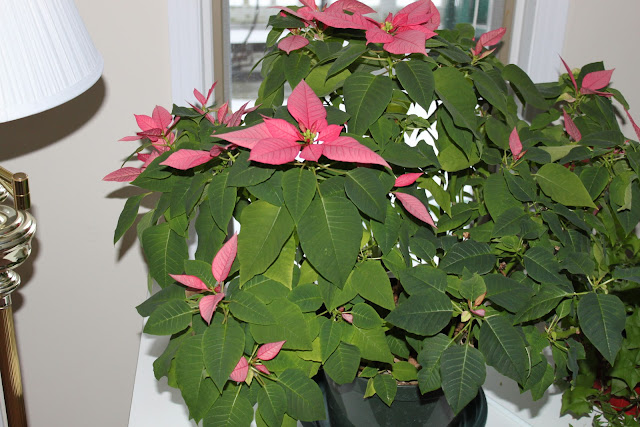 This one was given to me for Christmas 2010  by the same University student . It needs repotting and TLC. It's late blooming because it wasn't getting enough light where it was. 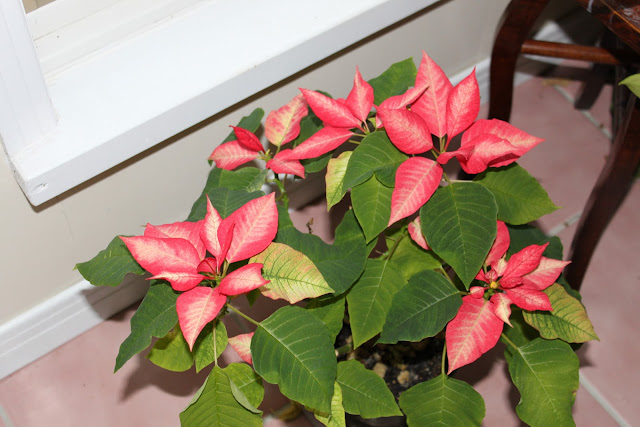 This one I adopted from our church last Christmas 2011. in need of TLC too but it's blooming. 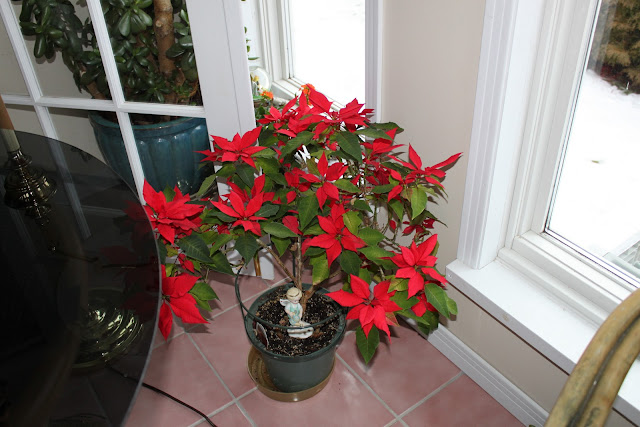 This one is a gift from the University students brothers  for Christmas 2009. I lost one stem from an accident  but although the bracts are small I love this plant.
See my little gardener angel watering it. That little angel was given to me as a little gift in a Sunshine Basket when I was going through chimo. It's a Dollar Store buy but full of memories. 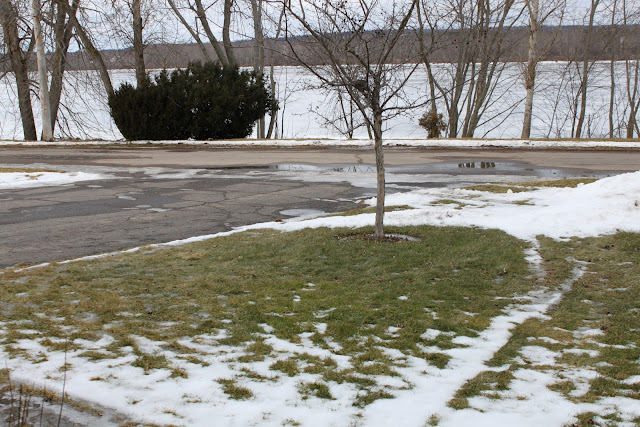 This is what my front yard looks like at the moment. The January thaw has visited us.  It almost felt like Spring. 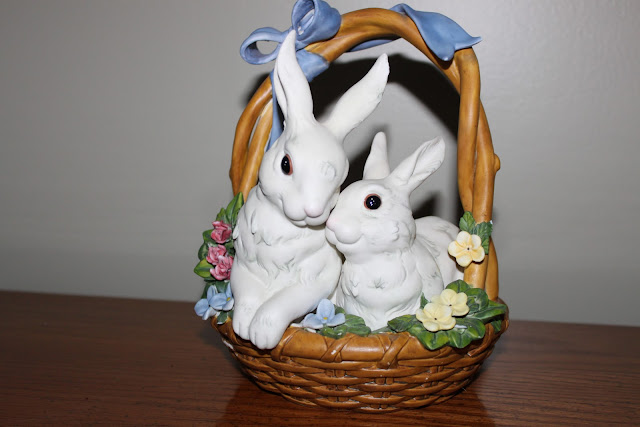 Since I haven't posted my Value Village treasure lately, I thought that I had to show you this cute pair of twitter-patted porcelain bunnies. The basket is about 7 inches tall. 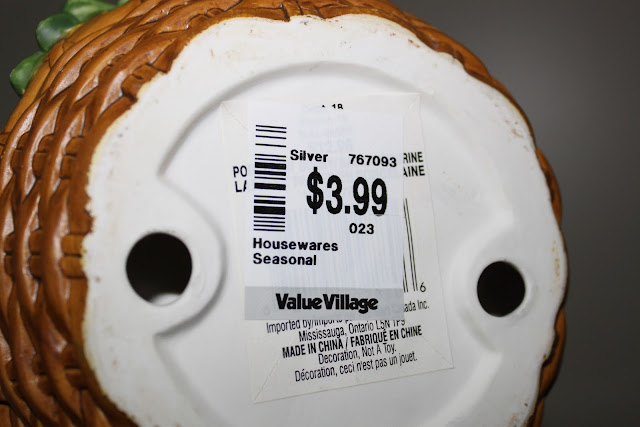 As you can see, I paid $3.99 for this cute Easter decoration.

MEANWHILE,  ON THE FARM NOTHING HAS CHANGED MUCH...

My husband called me real early this morning, waking me up from my sleep before my alarm rang to let me know that I had a new calf and  that another heifer needed assistance to give birth.  I just sold a bull calf on Tuesday and now I have three more. 13 small calves is a handful. I'm weaning the triplets, Faith, Hope and Love  and Charity off milk.

I was so tired when I came home for breakfast today at 10:30 a.m. It seems that I've been coming home to breakfast at 10:30 everyday this week. Anyway, I poured myself a nice hot cup of French Roast coffee prepared myself  a big bowl of oatmeal with walnuts and raisins, sunflower seeds, sesame seeds, pumpkin seeds and  milk and sat in front of my computer to check my emails. I just barely finished my breakfast that I could hardly keep my eyes opened. I felt a bit cold all of a sudden and went to lay on the couch wrapped up in a couple of throws. I fell asleep and slept till 1:30 PM. I think that I was sleep deprived.

I managed to quilt a bit today and went back to work at the farm. I'm almost ready to make another turn on the quilt.
Thanks for stopping by and leaving a comment.   JB
Posted by Julia at 11:01 PM 25 comments