IT'S A GOOD THING IT'S RAINING AGAIN.

The week went so fast I can't believe it will be Friday again tomorrow. Nothing special happened since my last post except that I'm feeling grounded with all the kneeling in the garden I've been doing lately. I've weeded six large flower beds.  A great place to ponder on my life.  It's a wonder I don't have roots growing on my knees. All day, I've been listening to a poor mourning dove, sitting alone on the wire. I wonder if it's mourning its companion. 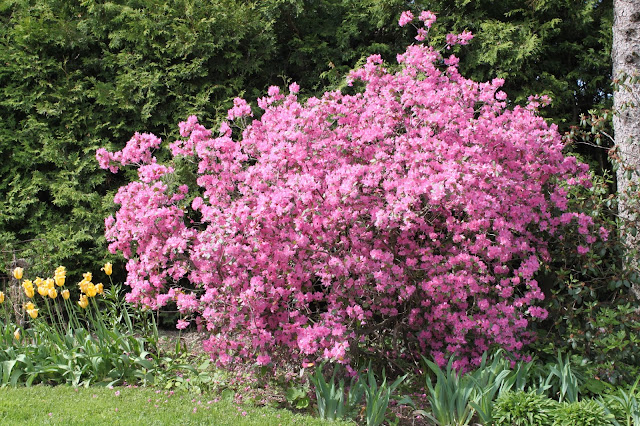 The other Azelia has just finished blooming and this one is now in full bloom.

It's been a slow process to repair the flood damage in the gardens and yard.  I'm making some progress but it's hard on the poor back. I was chased inside when it started raining and I was kind of glad so now I can do a blog post. Luckily, I remembered to bring my camera outside for a few pictures. 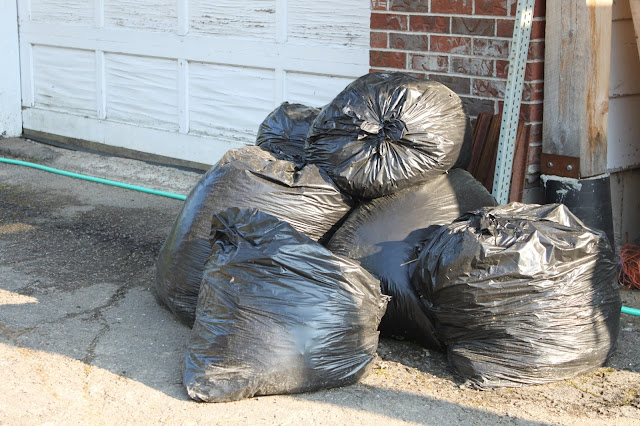 I had about 20 bags of garden debris to mulch. I now have two left to mulch. I forgot about them as they were in the carport.

Nothing much to report except I've been mowing the lawn,  making mulch,  planting,  weeding and moving tonnes of soil and I'm not done yet. The garden is growing well and my beans are up and mulched. Oh yeah, I cooked a few meals now and then cause we have to eat, but not much cleaning in the house. 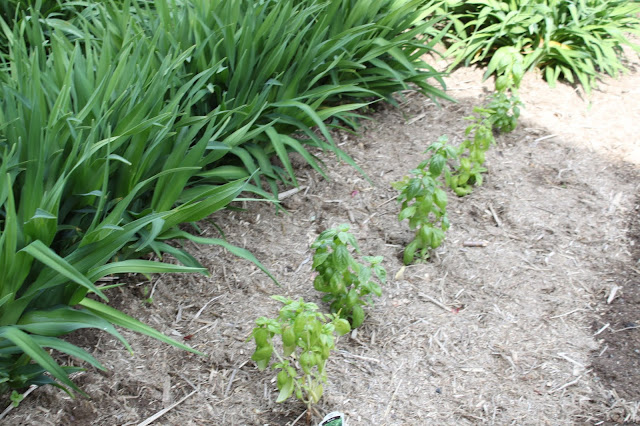 I mulched most of the garden but I'm only showing some of the basil. I can walk on wet mulch and my shoes don't get muddy. Those were started from cuttings and are taller. 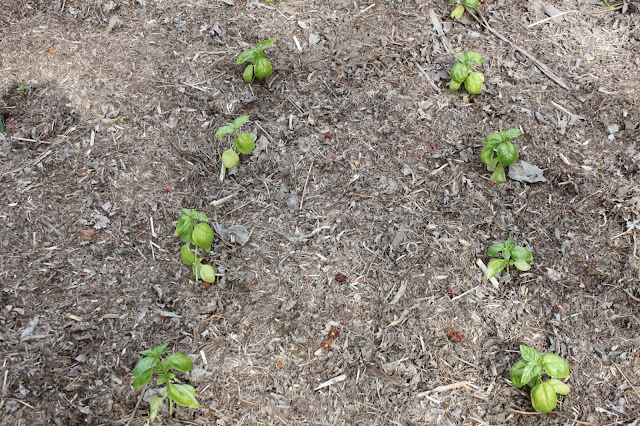 These were started from seeds but they will catch up to the bigger one in no time. They got a bit sunburnt but the new growth is getting greener.


For the third year in a row, I gather garden debris like leaves and dead daylily debris and I  put it in bags until I'm ready to mulch it with the lawn mower and then I put it on the garden after I weed to keep the moisture in and the weeds out. I should clone myself so I could work faster. 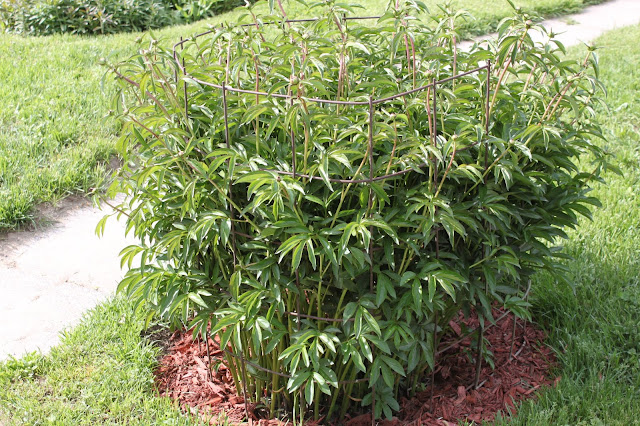 The peonies are starting to bud and I used some bark mulch for these. It was so sunny today, all my photos are washed out. 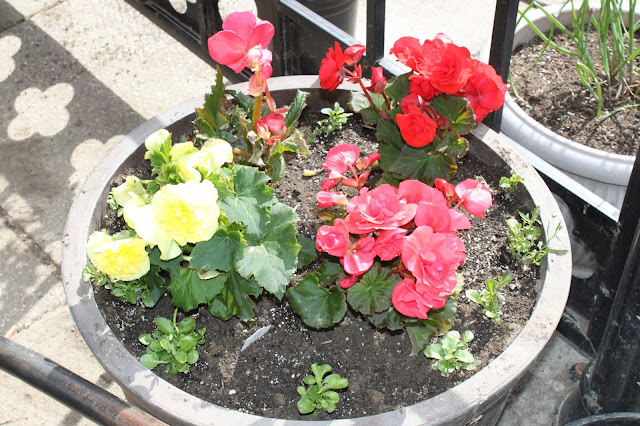 I planted 2 large pots of begonias with trailing lobelias. I'll show the other one later. 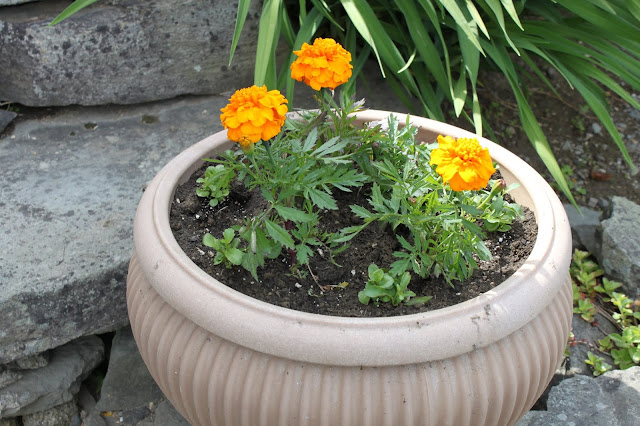 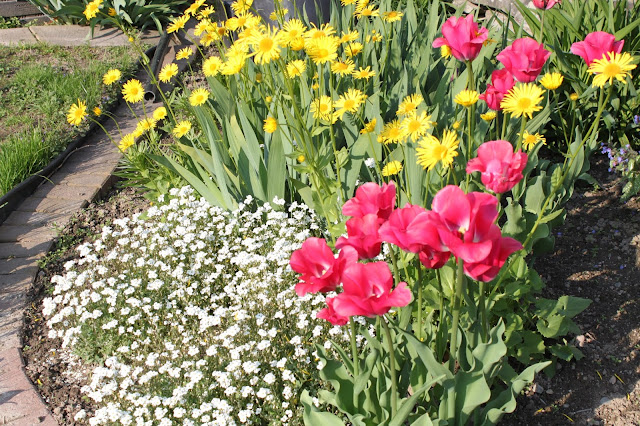 I've been looking online for these tulips I got many years ago and I can't find any. They were called Mounties. They have survived well and I will divide them this fall. The leaves are wavy. They are my favorite. 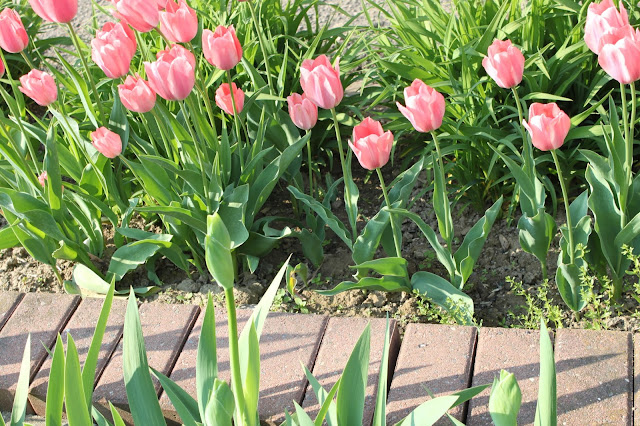 This double bed has been weeded since I took this photo and now my Tall bearded Iris are starting to bloom but I didn't take any pictures.
Sorry so many pictures but they are for my record. There will be more to come later.
Thanks for stopping by. Please leave me a comment if you want me to keep blogging.
Posted by Julia at 10:09 PM 17 comments