Time is slipping through my fingers at a break neck speed. It's like being on a merry go round that just won't stop to let me get off. I can't believe how quickly time is melting away. Already one week left before were in November.

I was out today to work in the yard and my fingers were getting so cold that I had to come in to warm up. I have a condition called Renault syndrome, where the fingers hurt really bad like frost bite when it cold. They are very sensitive to the least bit of cold. The sky has been sunny and cloudy and the air humid and it has been windy all day. I sure like the stove heat when I came in to get warm. 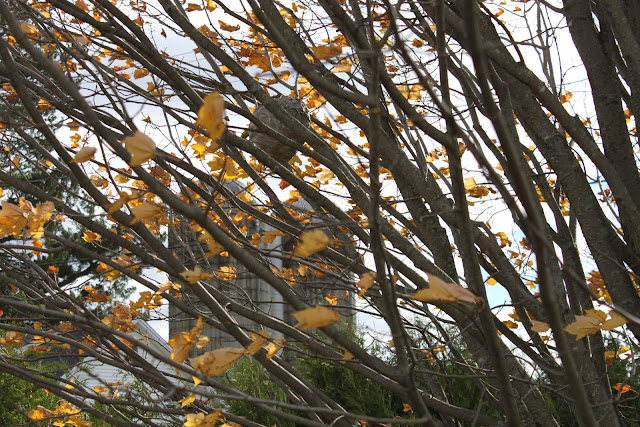 I managed to take a few photos in the backyard and discovered a huge hornet nest in my maple tree by the deck. I took a few shots and had to set the camera on sport setting because there was so much movements of the leaves and the hornet nest moving in the wind.   Notice the two old abandoned silos in the background.  They are set to be demolished sometime in the future.  Those silos are used as land marks by airplanes as we live only minutes from the airport. 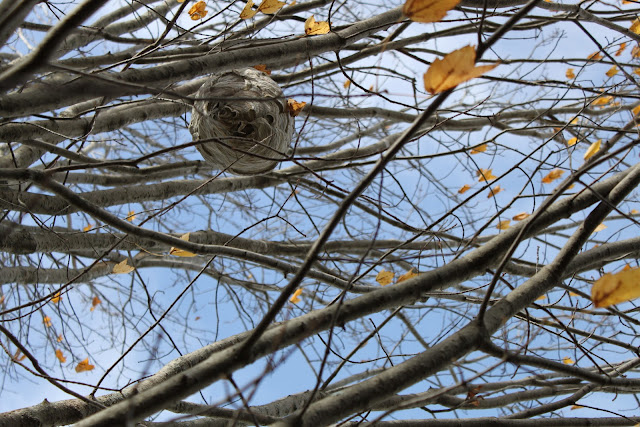 An underside view of the huge hornet nest. This is the first time I took a sport shot and I love this feature on my camera.
This afternoon while the sun was out I did a bit of hooking and a bit of ripping  and then had to go to the airport to pick up my sister in law who was coming in from Toronto and her flight was delayed so when it finally arrived just had time to make it home to change into my barn clothes and get to work.  I wonder what it feels like to have a whole day off from work unless I'm sick in bed. I know... I'm complaining again... Stay safe during the weekend.  JB
Posted by Julia at 7:54 PM 10 comments