IT GOT WORST AS THE DAY PROGRESSED

Here is how my weekend went.

Saturday, Nov. 16 One of the calf I was weaning off milk was eating more grain  than usual and had pooped all over her gate and pails so I hosed the gate down and she panicked, reared on her hind legs and jumped in the next little pen with the other calf.  I called my husband but he was busy milking and my son was still in bed and would come in about anywhere between half an hour to an hour if he didn't fell back asleep. so I decided to try to feed them one at a time. One drank the whole pail of mostly water with a sprinkle of milk replacer powder while the escapee sucked on her new friend's ear.  I thought that she must be full by now and the other one would  be next. She drank the second pail while the escapee continued sucking on her ear.  I tried a third pail and she wanted more so I pulled the pail away.

It was getting close to lunch time when my daughter Jackie and granddaughter Nicole came to bring my grandson Liam to work at the farm so I went home with Jackie for a cup of tea and to give her something.

I had to feed two workers for lunch and it was 11:45am already and no lunch ready. George left me a note that he already had his lunch and had gone in the field to spread liquid manure. I had made a big pot of beef  barley vegetable soup the day before and I put a piece of roast beef through the food processor and made some meat sandwich fillings and the boys made their own sandwiches and heated their soup in the microwave. Everyone was happy. I ate and went back to the barn to clean that pen.

The two calves were beginning to feel crowded in the small pen made for one. My grandson arrived to help me  and together we   cleaned, scrubbed and washed the pen well and put bedding in and tried to get the escapee back in her pen. Calves can be very suborned.  She didn't want to come out but the other one walked to the end of the narrow alley. Perfect, I  put one of the little gate there and tied it down to keep her there and with much coaksing  we got the escapee in and locked her gate.

Now we had a second vacant pen so we cleaned that one and two more using the same tactics.  We almost lost one of the calves out the door as my grandson misunderstood my command and instead of blocking her way out he got out of her way and she dashed out of the enclosure and the barn door was open for fresh air but I ran after her and stopped her from escaping. My grandson is still learning how quick they move.

After we were done with cleaning those 4 pens, I sent my grandson home as he was getting tired and hungry and I started to do my evening barn chores work and got home around 7:00 pm and washed and had supper.

I called my son and by the time he got there the calf was born unassisted. He carried the calf to the big pen and took care of the mother and I fed the little bull calf and went home when my chores were all finished and took a quick shower. I went to church alone for 9:00am that morning as George caught up on much needed sleep.

I treated myself to breakfast with a dear friend and we had a wonderful time chatting girl talk and reminiscing. Time went fast and I got home at around noon.

I picked up my granddaughter Jordyn and her new baby boy and took her across town to visit a friend and show off her cute Cyprus.  I forgot my camera, darn it. I dashed over to pick up some calf milk replacer while in the area and on my way home, I stopped at Cosco and at the Coop for some grocery.

While I was at the Co-op I got a call from my son that the back door where the heifers are was left unlatched and the heifers all came in in the alleyway and made a huge wet mess. There was manure and pee from one end to another. It took him half an hour to clean up the  mess. I was very thankful that I didn't need to clean that mess. I normally clean up small messes.

Earlier that day a man wanted to trap raccoons and my husband had gone behind to show him where to find the raccoons and he exited another way.  That door can only be latched from inside.

When work was finished and I got home, it was already dark.   I found a note from my husband  who had gone to a meeting that my granddaughter had called to be picked up. To make a long story short, I left immediately to pick her and her baby up. The baby was crying and as we approached the farm on our way back, I asked her if she wanted to wait till tomorrow to get fresh cow milk and she insisted that we go pick up the milk now.

I filled two bottles of milk and as I went to wash the milk tap, there was  just enough water in the hose to rinse the tap.  BAD NEWS: There was no water at the farm... I took her to her home and  when I got to my house I called my son as my husband had left his cell phone home.

By now it was 8:20 in the evening and all I had eaten all day was breakfast around 10:30am. I was famished.

I sautéed some  fresh button mushrooms and I was about to fry my T-bone steak when I remember that I wasn't supposed to eat anything after 7:20 PM because I had blood tests at 7:20am  in the morning and I had to have a 12 hour fast. Everything went back into the fridge.

My stomach screamed in despair, I drank a tall glass of cold water and waited for my husband's return so I could tell him the bad news about no water at the barn. Cows drink during the night and remember when the water pump broke, the milk production went down because they had no water during the night.

No water is one thing and to make matters worst, my son wouldn't be able to help as he had an early hospital appointment in the neighbouring town for day surgery and I was due at the hospital for blood tests for 7:20 in the morning.

I'm so glad that my granddaughter decided that she wanted to get the milk when she did because this mess would not have been discovered until the morning and my husband would have been alone to deal with this whole mess.

Both my son Vaughan and George tried to find out what was wrong with the new water pump  and were getting nowhere. The hoses were brought out of storage again and hooked to my sister in law's house  and my husband filled the water troughs and called the plumber emergency number and they would be in first thing in the morning.  The pump was OK and it was a switch box that needed replacing. At 2:00 am, my son went to turn off the hose.

I was tired but happy that Jordyn wanted to get milk when she did or things would have been worst.

Thanks for reading my farmer's journal. Just think of us the next time you put cream in your coffee or milk in your cereal or recipe, or ice cream in your cones and butter on whatever.

To be continued tomorrow, to read at your leisure.

PS, I thought that a nice glass of Gewurztraminer  and a piece of dark free trade chocolate would be nice while I told my story. I took one sip and the Gremlins knocked my glass over and it shattered in pieces on the floor and all I can say is "That sip tasted good". Here what's left of my glass. Fortunately, there was another glass left in the bottle and I have lots of wine glasses left in the cupboard. 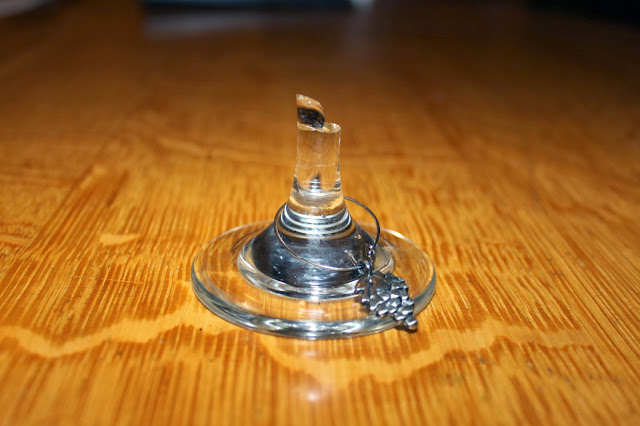 Good night all and sweet dreams.
JB
Posted by Julia at 10:20 PM 14 comments