On November the 3rd one of our cow got triplets, but it's old news for most of you. I went about my daily business of caring for them the best I could and carried on as usual with my other chores and normal routine. I even managed to cut some remaining dried standing vegetation from several flower beds but didn't had the time to pick the debris for my compost so it's still there on the ground. 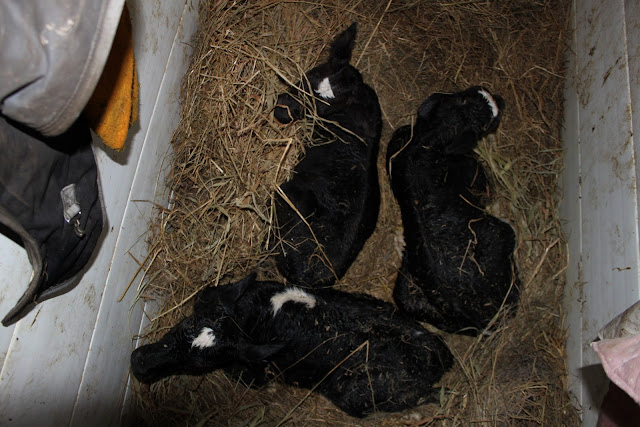 Three cold and wet trembling little triplets calves waiting for warm blankets to keep them warm through the night. 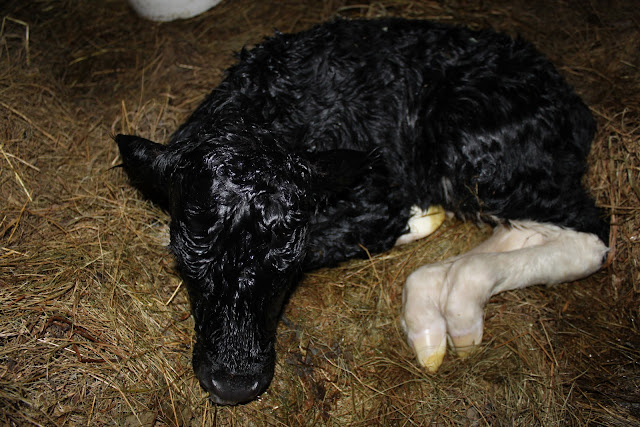 What I didn't know was who cared if we got three cute baby calves who were triplets. All I knew was that I had 6 new calves to feed and that they wanted to be fed all at the same time. Triplets, twins and a single calf. Thank goodness calves don't wear diapers. $$$ ... 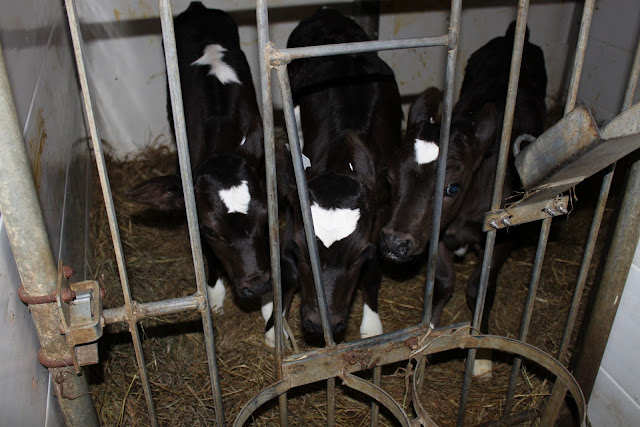 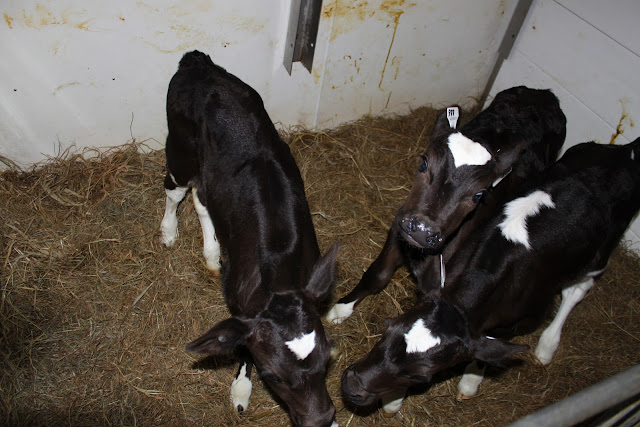 For the sake of taking a family photo I had to take the divider out of their individual pens. I think that this is possibly my best picture. They were constantly moving and really difficult to get them to pose for the camera.

My serene little world came crashing into reality a few days later when news got out of the birth of the triplets. How did it all started you might want to know? At our church, that's where. Our church was having parishioners gathering for picture taking for the Church directory and there was a woman's leadership workshop that I knew that I didn't had time to participate so I mentioned to some ladies there that I had new born triplets, a set of twins and a single calf all born recently and that I was expecting more to be born any day and I was too busy to do things for the church.

One of the woman present has a husband who is a professional photographer for CBC  News and she told him.

They visited the farm and he asked for my cell number so he could contact me to take pictures. No problem. He came with a reporter the next day and for about two hours filmed my husband and I tagging our 6  new calves for registration and identification. I had to photograph the calves on both side and also the head with ear tag number for the registration certificates. Then they took pictures of the calves with my husband and I and asked for an interview etc. I had no idea what I was in for. I've been on TV and newspapers and on the CBC Radio many times over the years and it was just small everyday stuff. So I didn't expect anything more.

I had some errands to run up town and down town and you know me, when I'm in the area I scoot over to Value Village to hunt for little treasures. I had to gas up, go to the insurance place and get some grocery and while in Value Village my cellphone rang and it was a reporter requesting an interview. It was a reporter  for  CBC Radio in St John N.B. and he wanted a phone interview. I arranged that he call my home phone at 3:00PM  as I had a funeral to go to at noon.
Since I didn't know how rare triplets calves are I decided to search Goggle  for triplets Holstein calves. I was shock at how rare it was and at beating all odds of having triplets of all the same sex that survived  and not only that they were gaining weight  rapidly. I was ready for him but I wasn't ready for the avalange  of interest this was going to generate. It hasn't stopped. Even I type this story the phone is ringing with people old and young who want to come and see the triplets for themselves. 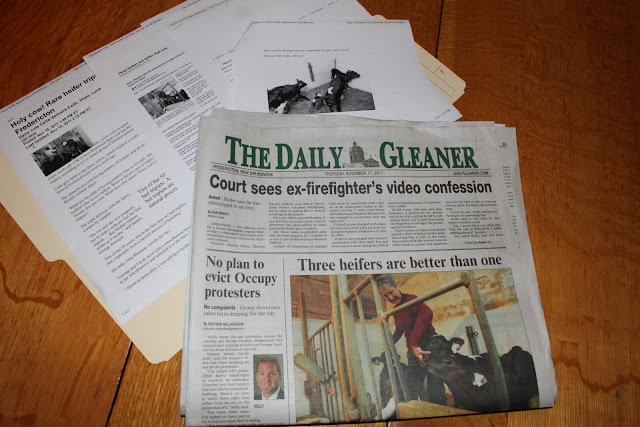 My sister in law bought a local newspaper for us today and I'm on the front page with the triplets sucking on my fingers as I'm trying to round them up for the photographer. Not looking my best but the focus is on the triplets anyway. All through this frenzy I had to find time to pay my respect to the family of a close breakfast group friend  who passed away and for his funeral yesterday.
Just for fun today I asked my husband to Google Bourque Farm Triplet Holstein calves and  we were surprised that it had gone international. All the way to China, India, Holland, through out Canada and the States.

People from Texas were calling family members here in Fredericton to let them know of the news and they in turn were calling our home phone. People I didn't even know.  Another lady who lives at the end of the lane from our farm also received a call from family member from the States to tell her what was going on right under her nose and she didn't know...

Now you know why I've been so lagging behind blogger comments. I was up way past midnight last night trying to catch up.

I feel for those who are hounded by the media on a regular basis. It's no fun.  There's hardly time to eat or get things done. At least it's not a tragic event like the big flood of 2008 that caused so much damage to our farm or the time the barn collapsed under the weight of the snow trapping 70 cows on January 31, 2009. This is a blessed event and we are grateful.

Thanks for stopping by and for leaving a comment.
Posted by Julia at 10:02 PM 34 comments