On wednesday late afternoon I arrived from farm to find my daughter Jackie bringing me a whole bag full of Rug Hooking Magazines.  It was like winning the jackpot. It felt like Christmas. It had been a very busy day for me as I was scrubbing the ceiling and walls in the milk house and I couldn't wait until night to settle down and go through the stack of Rug Hooking magazines.  There were some older issues and so much good information and dye recipes and techniques etc. and I quickly went through some of them and had difficulty putting them down to go to sleep. I was so exhausted that I had to limit myself to 5 or 6 magazine for that night. 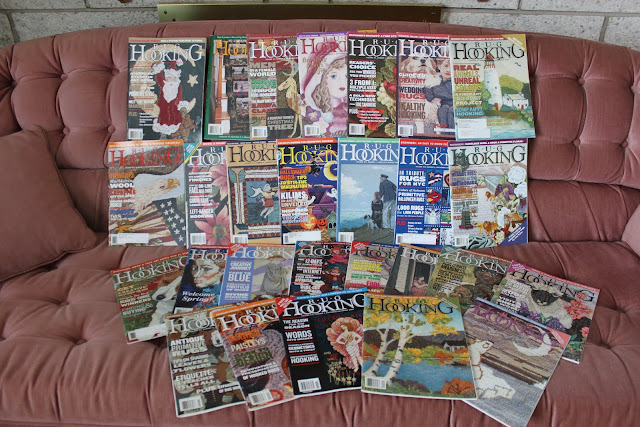 Some kind lady brought these at the NB College of Craft and Design where my daughter works and because they do not teach rug hooking class they couldn't use them and my daughter thought that I might be interested. I'm so glad that she did. There is a wealth of great informations in there. I'm so very lucky to have received these free of charge.  Thank you nice lady and thank you Jackie. I am so very grateful. 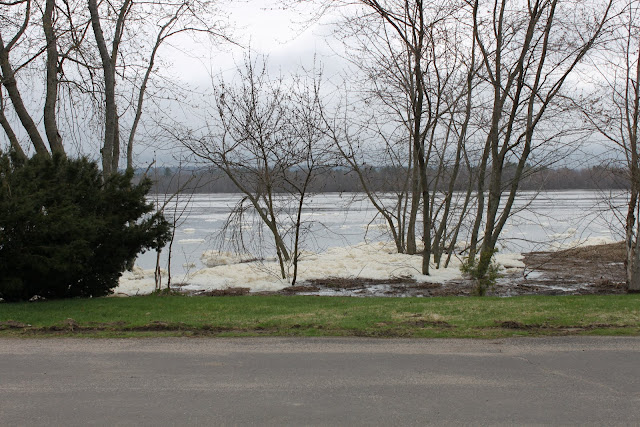 The St John River in front of our house during the recent flood. 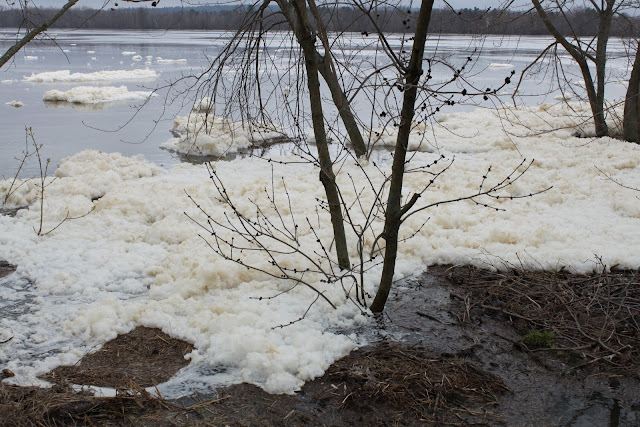 Last week was a bit of a pain as it rained so hard as most of you know and we had a flooded basement. I took some pictures of the river almost spilling over in front of our house. There was a thick foam on the water in the morning. It probably comes from industry up river. It looks pretty gross.  I walked over in my PJ's to take some pictures.  We were lucky that we didn't had to evacuate the cattle this time although we were stranded because of the only two lanes that gives us  access to the main road were both flooded. 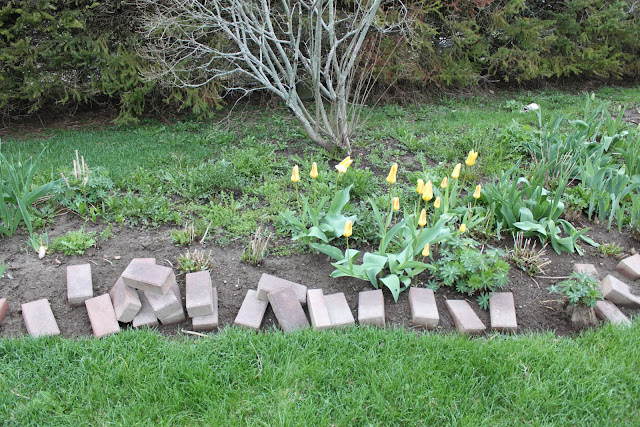 On Mother's Day I started working on this bed by tearing the bricks out and pulling dandelions and other weeds that has taken over the garden. I worked till dark and came in exhausted. Then it rained and rained and I got busy at the farm. The garden is still waiting for me to put it all back in order. The bricks were almost all submerged in the soil since the flood of 2008.It wasn't fixed as I had some other more pressing things to repair in the yard.  There is only so much a girl can do in a day. 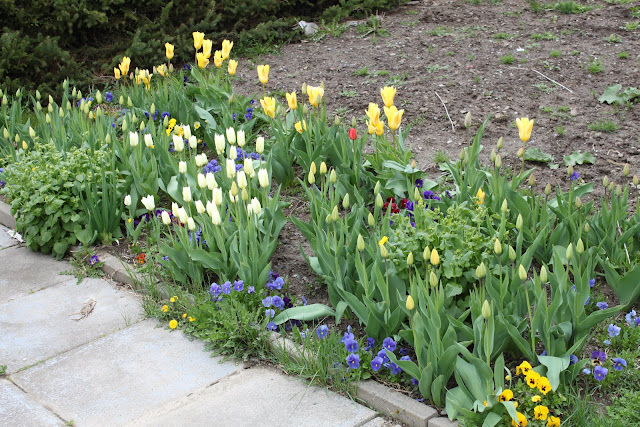 A small bed in need of weeding also by the patio. 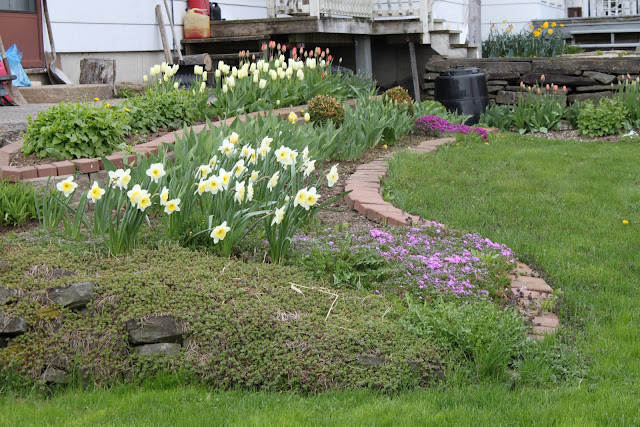 Flower beds in the back of the house. 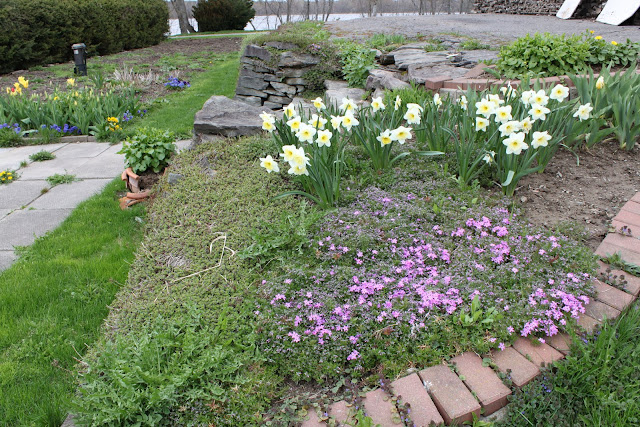 Creeping phlox starting to bloom along with some daffodils.( and those darn Creeping Charlies and look at those huge dandelions) 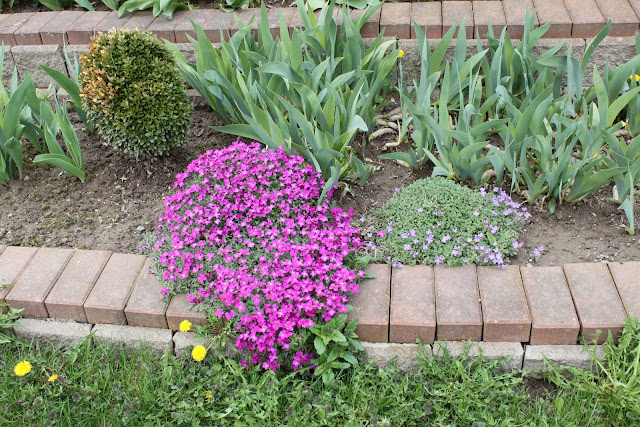 The Rock Cress  on the left is blooming  earlier than the one on the right and dandelions here too. 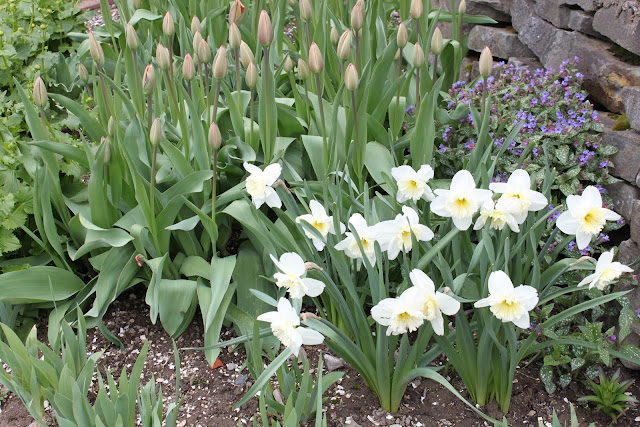 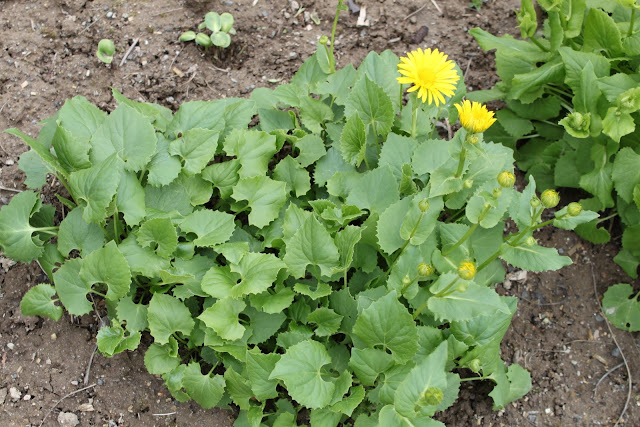 The Leopard Bane is starting to bloom. Usually they bloom at the same time as my purple Irises. 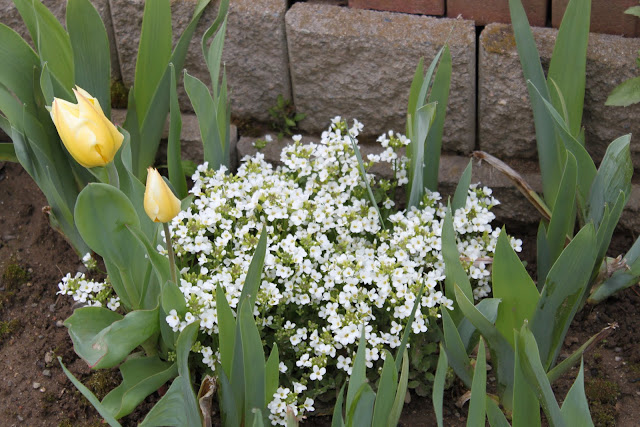 A serendipity white Rock Cress in full bloom. I'm getting some moss problem in some of my beds.

Nothing much to report on my Ceramic sorting. It almost done and I'm waiting for some packing paper and more large boxes for my basins and pitchers and canisters but I'm not rushed. I went to the newspaper place to pick up a couple of end rolls and they were waiting for some to come from Moncton as the paper is printed in Moncton apparently because of economic reasons. So I have to wait for paper to arrive before I can resume packing.
And folks, that's it for this post. Thanks for visiting and leaving a comment. It's much appreciated.   JB
Posted by Julia at 10:51 PM 18 comments