SOME DAYS, IT'S JUST DOESN'T SEEMS WORTH GETTING OUT OF BED


This morning was one of those days. I've been getting up at 5:30 am every morning since the daylight time changed and I was getting short on sleep so this morning I stayed in bed till 6:00 am and went to work. When I got to the barn I checked on my sick calf and he was still alive but not strong and he hadn't moved since his blanket was still in place. Despite all my efforts to keep him alive he was failing more and more since his birth. The vet was coming this morning to put him to sleep.

I then fed the cats, and put hay and bedding in the calves pens, grain in their pails and when I went to hose down the narrow alleyway floor as I usually do twice a day, I found out that I had no water. Just great, one of the young calf that had started eating his feed decided to spray the floor with his black paint. Just what I needed, but at least I could console myself that she hadn't sprayed her feed pail.

My first thought was that maybe my husband had turned the water off for some reason. There were no cows in the holding area and I thought that my husband had gotten to work much earlier and was finished milking the cows.

When I found him, he told me that he thought that the water pump had failed. It's a deep well submergible water pump and was 7 years old. Pumping water for about 120 some head of cattle  day and night can take it toll on the poor water pump. My son was called to come milk the cow while my husband tries to get someone to come take the pump out and replace it. There's an emergency number to call  but the guy was already gone on another emergency in another town.
He has to go to plan two and find another source to get the pump removed and another one put in.

I got my flash light and went looking for long hoses to connect water from my husband's sister's house all the way to the barn and into the cow's big water through.  During the night they had totally emptied all three water throughs. I had a 200 foot long hose attached at my house, and I found another one at the farm.

Then I had to go back home and fill all my big pots with hot water and I carried them with my van and my husband carried big buckets of cold water to the farm. After two trips I got enough hot water to mix the calf milk replacer to finish feeding 10 calves and my husband feed the little ones.

I did all what I could do at the farm and went home and made a nice chicken stew with dumplings for lunch and the repair man is at the farm replacing the pump and now I have to go was my bottles and pails and equipment.

Not all my week was as bad as this morning, my brother and his wife came to visit while they were on their way back home from visiting a sick friend in a neighbouring city and I invited them to stay the night. My sister in law was a real jewel and she came to help me feed and care for the calves and also she came early the next morning to help. I can tell you, she's a fast learner.We talk and laugh and had a good time. My house was in the worst possible mess but I knew she understood so I didn't get stressed. 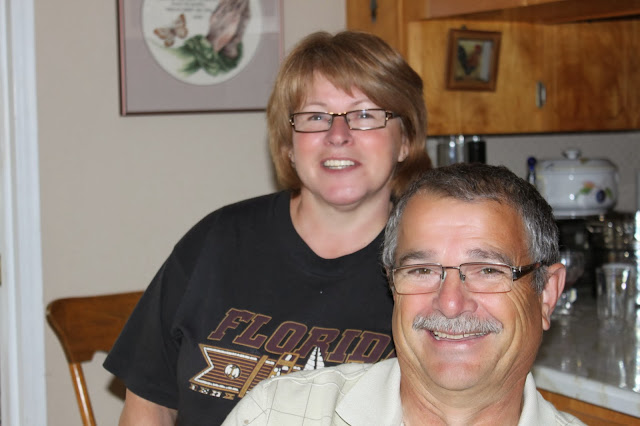 My sister in law, Juliette and my brother Jacques

When the vet arrived with his usual good nature, he said "Good Morning" and my response, It's NOT a  good morning. He laughed but when he went to check a cow, the cow wouldn't get her head in the lock and he had a wicked time, I tried but she refused  and my son had to help rope tie her and the first thing she did is shit all over the front of his clean coverall. Poor guy, I had to laugh.

I told him that I had a lot of farm laundry to wash  I could include his coverall in the wash since I had to wash the calf warmer jacket and his blanket and lots of rags that I used to keep the sick calf clean yesterday. He had to laugh too. He had to change into his plastic coverall.

My little bull calf was gently put to sleep this morning and is now roaming in the greener pastures. Although he was sick, he never had a fever. The vet thought that it must have had a weak heart. I no longer get attached to them as I did before. I'm getting tougher.

Oh... and the previous post about my new farm boots must have appeared unusual to most of my followers but I can explain. I was showing Juliette how to navigate Blogger and how to post a picture and since the last picture I put in the file folder came up when I went to upload a picture , that's what I used. Thanks to all my most faithful followers who bothered to comment. You are the greatest to humour me under such conditions. I love you all.

Sorry this post is so long.... a good thing that I don't blog often lol...

There are many little stories that happened during the week but these were chosen as the headlines. Thanks for dropping by and I appreciate even the smallest comment. ( sorry, no time time to proof read this afternoon, the pump should be in by now.)
JB