MY INTERESTING RETURN TRIP BACK HOME

When I go home I usually drive since it's only three and a half hour car drive but because of bad weather in the forecast, I went with my brother and decided to come back home on the bus 4 days later. I had a good time at the family Christmas party. Usually, I can never attend the Christmas party because of work and we connect on the phone or facetime. 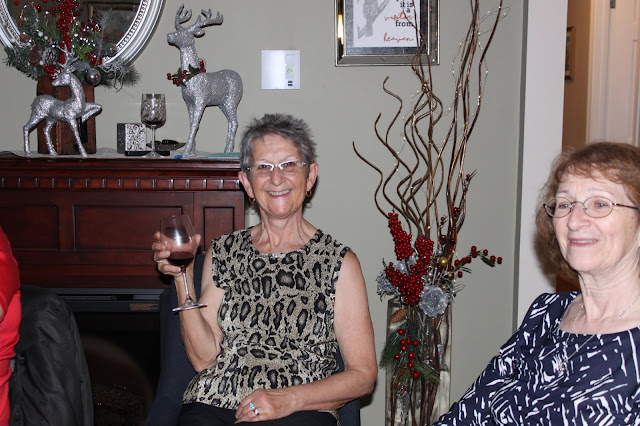 Not a very good picture of me and my sister Therese. I still had a wee bit of yellow tones from the bruising but's it's all gone now.

After a 4 day relaxing visit with my gracious sister in love, Theresa and my brother Gerard, I  boarded a small bus and I thought that I would die of heat... By chance, we were all senior women and one lady declared that we were all running away and everyone burst out laughing.

When we got to the next bus stop, some people got off and others got on. This beautiful petite Romanian woman was trying to contact her family in Toronto but her iPhone was dead and she didn't have a cord to charge it. She was asking everyone if they had a "plug it" for her iPhone. Nobody could help her... As she approached the front I told her that I had a cord that she could use. She came and sat beside me in the front but the plugs didn't work. She tried several plugs on the bus but none worked. I told her to wait till we get to the next city and she could charge her phone at the bus station.

In the meantime, she is not giving up trying the plug outlets, but of course, they didn't work. She asks if I would let her use my cell phone, I said sure, as long as it was not a long conversation. She was so grateful. She had two short calls to make, one to her parent and one to her friend in Montreal.

She explained that she hadn't seen her kids for a month and she was just getting out of jail because of immigration difficulties. She had lost a lot of weight while in prison as she couldn't eat. She cried a lot... She said that she prayed to Jesus for help, that she believed that He would help her and that she told me that she was Catholic.

We talked and she was very pleasant. She told me that she is 20 and lives in Toronto with her parents and she has 4 kids and her youngest was only 2... She got her first one at 14 and they were allc-sections. I asked her why was she going to Montreal since she lives in Toronto.

She showed me the court documents that said that her friend in Montreal had signed and paid her $1000. bail and the judge wanted her to go stay with her friend in Montreal. She had no money so I slipped her a $20 that I could spare and she said that she would buy a cord to charge her phone... She was so grateful that she wanted to give me her sandwiches, her bottle of water and an orange. I said that she would need it but she wanted me to have them. She was very insisting so I took the orange. She had a cheap ring on her finger, and she also wanted to give it to me. She said, You like? I want you to have it. I told her it was nice but I didn't want to take her jewelry. My daughter Nicole left me some of her jewelry and I had enough.

Her jailer had given her two paper lunch bags that contained bologna sandwiches, some fruits and one bottle of water.  On her bus ticket, it said that she would arrive in Montreal at 6:30 am the next morning. She had a 5-hour wait at the bus station before boarding her bus to Montreal. I had a short wait for my bus to get home and would arrive at 1:40pm. My heart just melted when I realized that she has 5 hours stop over before continuing her trip. I gave her my iPhone cord since I could pick one up once home.  You would have thought that I gave her the moon. Her smile was from ear to ear as she talked to her mom and her kids. It made my day and we hugged and said goodbye.   It was just meant to be. I didn't understand a single word she said but she was very happy. All in all, it was a most pleasant bus trip.

My son Vaughan picked me up at the station and when I told him my story, he said, "Mom, I would have done exactly the same. 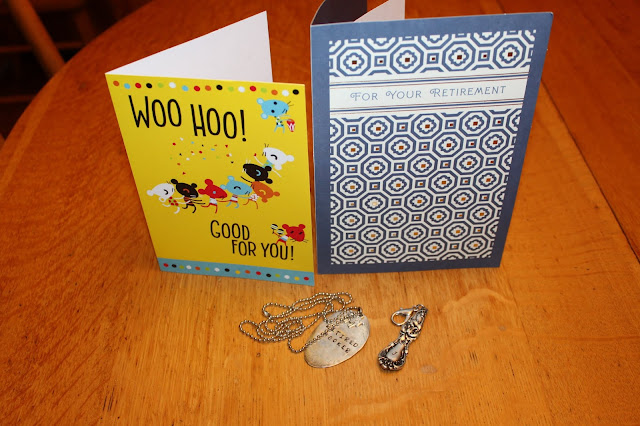 Lauren from Rugs and Pugs must have been very happy for my retirement because she sent me two cards, not just one but two and also a wonderful silver spoon that says Retired Hooker and it has a little sheep pendant at the top and a keychain with the most beautiful ornate spoon handle. I just love these and I'm so lucky to have such a sweet and generous friend.
Thank you so much Lauren. I'm planning on joining a rug hooking guild in the near future and I will wear the necklace proudly. 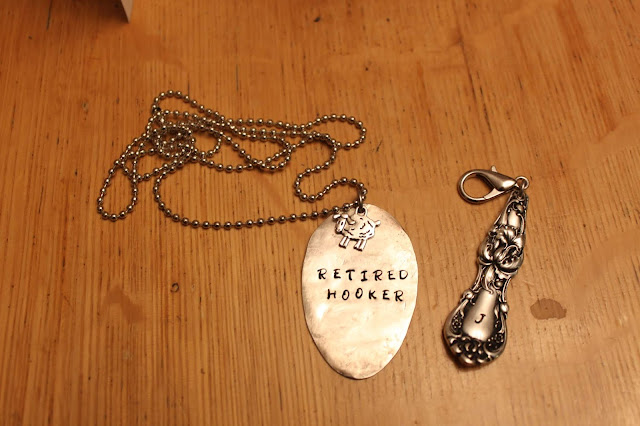 That is so thoughtful of you Lauren. I'm so happy to be retired too. I never thought it would happen. 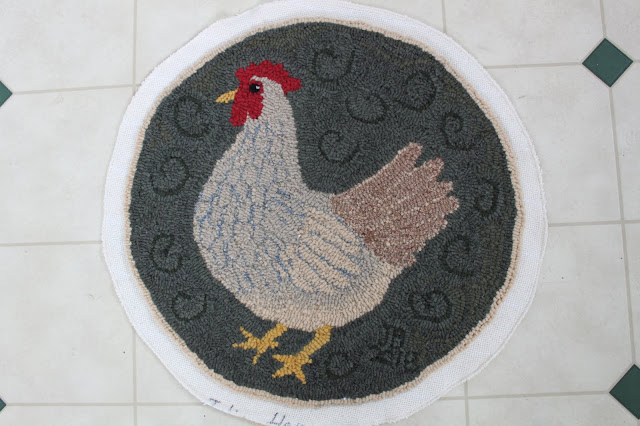 Update on my Julia Chicken rug that is long overdue. I finished hooking it last night and today I serged the edge and now I need to bind and whip it. I ran off of the background color and dyed some more that wasn't exactly the same shade but it worked well enough. I think it was one of the reasons that I stalled on finishing it.
Thanks for reading my bus adventure.

Stay warm and safe, Christmas is only a week away so you better be good.
Hugs, Julia