SOME DAYS, IT'S NOT WORTH GETTING OUT OF BED

How was your weekend? Mine was on the hellish side.
I didn't take pictures because I don't take my Canon camera to work so you'll have to take my words for it. These are older pictures of the same pens that flooded. First the pictures and then my story of woes. 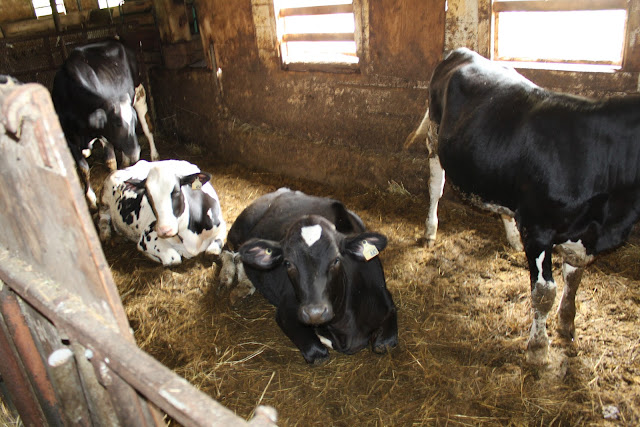 Those are the bigger calves in the pen that flooded. It's a long pen that is divided to suite the how many calves we have to keep separate by size. 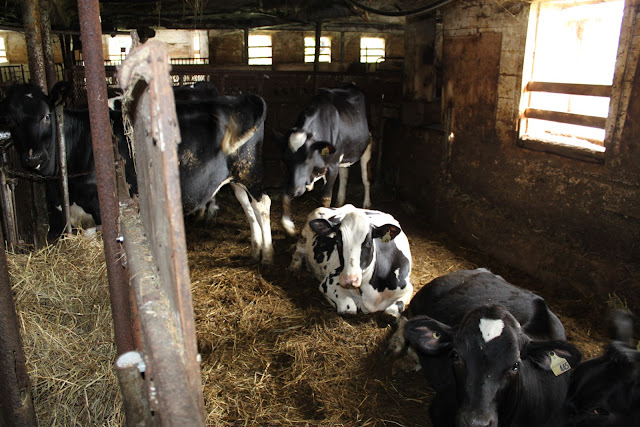 My baby calves are along the back wall where those small windows are on the top of the pictures. 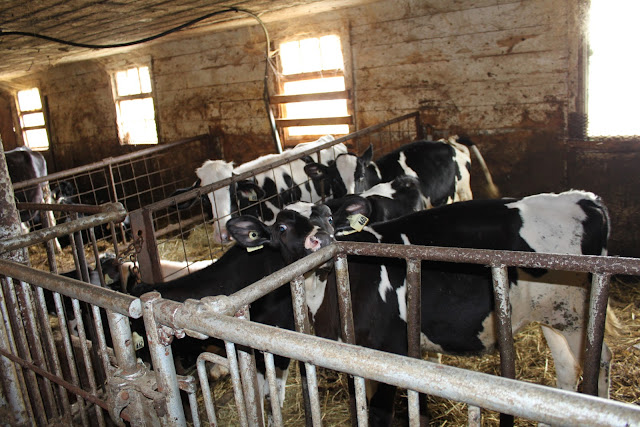 These two pens is where we keep the younger calves  and they are divided again by their size and age. 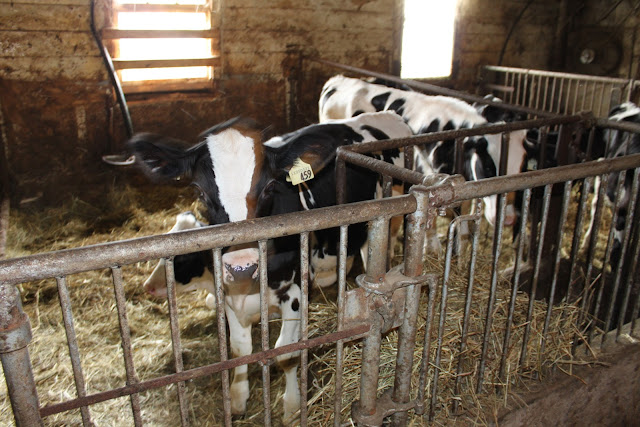 If you look closely, you can see the water bowl that flooded beside the ear of # 459. These pictures were taken last summer. 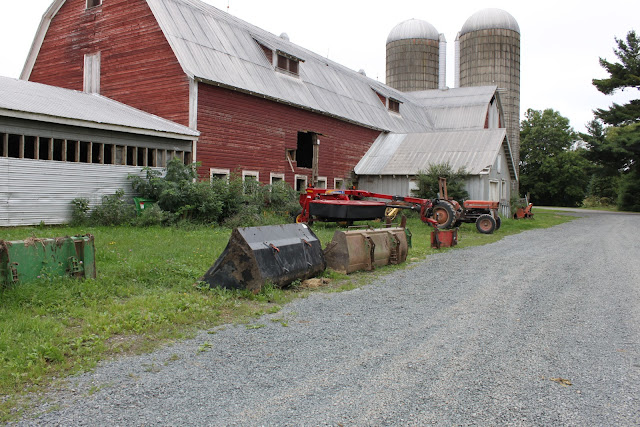 The calf barn is right next to the silos and run all the way to the back.  The milk house is not seen on this picture and is to the left of this picture.


Friday  morning I went to work and the first thing I noticed when I went to give the grain to the small calves was that the cows had tore the hinges on one side of the little gate that we open in order to clean a section of the little pens. It was a sturdy little gate but they still broke it. A cow must have mounted another cow and pushed against the little gate. Those cows weigh a lot. Luckily the little gate was still hanging although lopsided,  and no cows got out through it.

I thawed the copper water taps and that only took a minute and I gave water to the weaned  calves.

Next the water trough was badly frozen in the heifer barn in the back because the heifers have chewed the insulating foam on the water pipes and the warming cable was no longer working to keep the water from freezing. Heifers are so destructive.  I had to go get some very hot water and pour on the pipe and got the water going and broke the thick ice with a hammer so they could drink. They kept trying to lick my face and my glasses were getting all steamed up...

My mittens got all wet and my fingers were frozen. I had to go back and forth to the sink to get them warm up in hot water. Then I had to close the door in the back but it was rubbing on the floor because of the frost and it was hard to close and as I pulled hard the handle which is as old as Adam became detached on the bottom and is hanging from the top now.  Just not my day...

Last evening I noticed that two of the small water bowls were frozen in the smaller calf section. Just a thin layer of ice but enough to stop the flow of water.
I  went to thaw the first one and as my back was turned one of the calf mounted me from behind, yeah.... She put her two front legs on my shoulder and let me tell you, she was heavy.  I had just washed my barn jacket that afternoon... I got the water bowls going and  they all drank frantically and I left the barn to come home for supper.

This morning I braved the nasty storm to get to the barn and instead of going to the milk house like I usually do to warm  the milk for the little calf, I went directly to the calf barn to see if the taps were frozen. The first thing I noticed is the sound of water running. I went to investigate and I didn't had to go far to see what was the matter.

The water in the bowl I had thawed the night before had run all night because the float didn't go down to shut the flow of water when the calves were done drinking. It flooded the whole section where all 15 calves were bedded and it was one big mucky mess of poop, bedding and water in the mix...

I called my husband who had just finished milking. "Turn off the water valve" he said and I'll be there in about 5 to 10 minutes...   that's a long time. ... I turned off a valve in the ceiling and shut off water to the whole side of the barn including the heifer barn in the back lol...  I don't know about these things...
One valve shuts down the calf section and the other is for the rest of the heifer barn, who knew?...

Anyway, the water had overflowed the pens and was now running in the alley way  about 3 inches deep. It was deeper in the pens because the pens have sides ... It was one big mess of poop, bedding and water in the mix...

Since we have to keep the smaller calves separate from the bigger ones because they can hurt them, I opened the big  calving pen  on the other side of the alleyway to let all smaller calves in there. But one didn't want to go in instead she wanted to jump and run back and forth in the wet alleyway  and she slipped and got all dirty including her face. I got them all in there and closed the gate and my husband arrived.

In the process of moving the 8 bigger one, two got away because my husband didn't see that one gate was still open when he let them out of their pen and one of them bushed against this little gate and damaged the hinges.  Two little  gates damages in two days....

The boys cleaned off the  flooded pens after I went home and most of the water in the alley and put fresh bedding  but I still had lots of cleaning to do before I could feed the calves this evening. We don't clean the pens as often when it's cold and just keep adding bedding every day. It doesn't take long to accumulate.
So here is my blog post for today. Tomorrow is another day. Hope it goes smoother. I've got my share of Murphy's law for the last two days.

Hope that you all stay safe and warm. Thanks for visiting.
JB