IT MUST BE THAT HARVEST MOON....

I checked the weather forecast last evening and I planned my day accordingly. I was going to do routine work at the farm, and cook some Chicken Fettuccine with Sundried tomatoes for lunch and cut my back lawn and do some weeding.

I checked my email and got this picture from my daughter Christine. 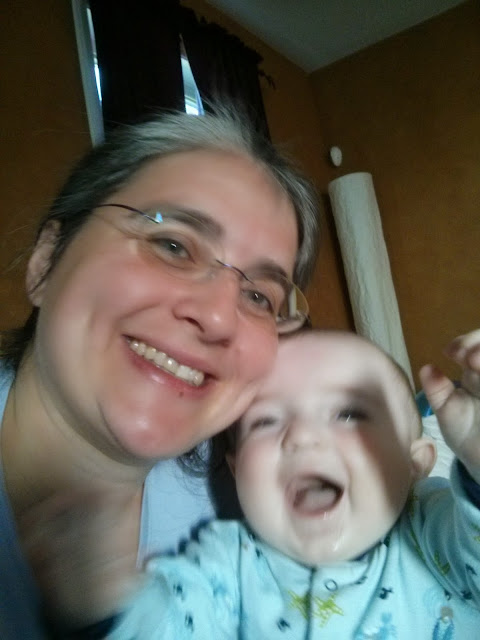 Not the best quality but you get the picture. Isn't that precious, little Daniel is such a happy little fella.

Anyway...
When I arrived at the barn there was a new calf born in the calving pen. Just before finishing my job, I found another calf born amongst the dry cows. I called my son Vaughan for help. Either one of us could figure which cow had calved. My husband George came to see if he could find the mother but he couldn't either. There were no visible signs. He called the vet to check which cow had calved so that she could be put in the pen with the calf. I dip the umbilical cord  and gave them each their vaccine, and my son milked both cows and help me feed them.

With two new calves and my 10 calf  pens full, I had to move the two older calves that I had just finished weaned off milk and that meant  two empty pens to clean and scrub after lunch. It's a heavy and stinky job. My son helped me move the two bigger calf down to the other end before going to do something else. Not as easy as moving little calves. Even little one are not easy to move....

I went home and I managed to make my beloved  fettuccine for lunch and after lunch, cleaned the dishes and kitchen and tidied up, swept the floor and  I went back to the farm to clean the pens. I put some fresh bedding in the two cow pens before returning home for a wee snack before returning for the late afternoon feeding and chores.

I'm taking my first bite and my cell rang. My son Vaughan needed my help to deliver yet another calf. This one was a hard pull and needed to use the winch. I got there as fast as I could and helped.  So far, one heifer and two bulls.

With three new calves it always means more work and it takes longer  and three cows to bed and give hay to and freshen up their bedding. Work is endless it seems.

I'm finishing up cleaning this end of the barn and I go down the other end to wash the bottles and nipples and met George, all out of breath. He found another calf in the very back of the barn but her  mother was dead. It was her first calf and she had a hard delivery alone with no one to help her.
Luckily the heifer calf was alive and laying not far from her mother and was very dirty as it was muddy back there. My husband had heard her cry after he was done working  and went to see and found the sad scene and needed my help to bring the calf in the barn. My son Vaughan was gone by then.

Since it was way too far for George  to carry the calf, he went to get the wheelbarrow and put a bit of hay in it but his asthmas got so bad that I sent him home to get his puffer. I was afraid that he would die there along with the dead cow.

The poor guy was barely able to breath, he  came back all the way to the barn because the house was locked up and his keys were in the truck at the farm. His breathing was so laboured by this time that he had a hard time to think. I was really concerned. He got in his truck and drove himself home to use his puffer. It takes about 5 minutes to start to work.

My grandson Liam just happened to have come to the farm after school and was cleaning the alleyways with the skidstear. I went to the other end of the barn to fetch him and the both of us went out back through a herd of curious heifers  to try to find where this calf was.

I'm getting braver by the day, I tell you. I used to be so scared of cows and heifers. lol... Now I just plow through them, lol... Well I wouldn't plow through a herd of cows actually. Heifers are so darn curious. You chase them and they keep coming back.

My grandson didn't have a pair of rubber boots on so he couldn't walk in the deep muddy muck like me. We had to open a bunch of  gates here and there to go through and I figured a better way to bring this calf inside. It was longer but easier. The muddy terrain was so bad after all that rain that my grandson had to pull the wheelbarrow backward while I held the calf down in the wheelbarrow.

One way to hold down a calf in a wheelbarrow is to cross one of his front leg and and one back leg so they  can get up. They get pretty feisty those little guys and they are unbelievably strong.

We made it to inside the barn and by then my husband was breathing much better and came to take over for my grandson. I dipped the calf umbilical  cord in iodine and vaccinated her. It was a heifer and I'm calling her L'il Annie. Poor little thing, it's a good thing that she was heard by my husband or she would have been there all by herself all night, prey for the coyotes.

I had no pens left  to put her in so I made a bed and put a halter on her head and tethered her for the night. She laid down in a nice bed of fresh hay and a full belly of colestrum warm milk.

I could possibly have another calf by morning. Oh God, I hope not... It's the harvest moon after all. Did you see the big full moon?

My back lawn didn't get mowed, I didn't pulled a weed and didn't absorbed much beautiful sunshine rays today.

I now have two new bulls and two new heifer calves today. So now I have 12 little baby calves, and 11 little bigger ones. Enough to keep me occupied.
I hope that tomorrow will be less eventful.

Thanks for stopping by and for reading my farm adventures. I'm honoured that you bother to comment.
God bless,
JB
Posted by Julia at 10:59 PM 31 comments