Sorry for being such a poor blogger. When I come in from a full day's work, I'm so tired that I just plop myself in front of my computer and instead of posting, I check my followers' blogs and leave comments on those who  normally leave comments on my blog. I'm a two fingers typist and that's pretty darn slow and it takes me so long to type that I'm falling asleep before I can post on my own blog. Forgive me my Blogger friends if I don't always leave comments on your blogs. I always feel that my visitors are owed a curtesy visit with comment. I always enjoy reading about your day. 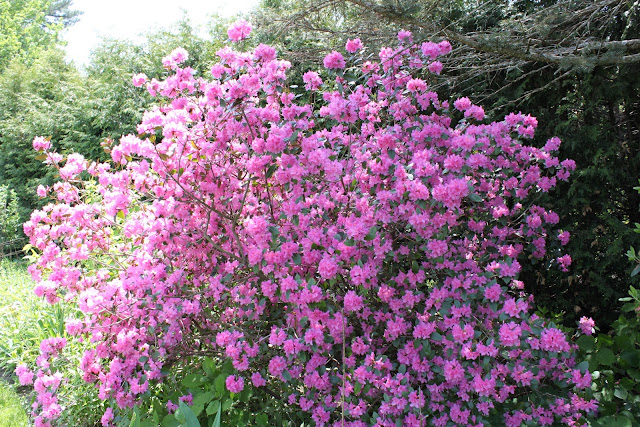 For lack of a heifer calf photo I decided to use my azalea that is blooming right now for the blog photo.
************************************
The weather has been all over the place but I can't complain as our American friends are really going through some rough time with all the tornados, rain and flooding. I hope that the weather will soon settle down to a normal summer for all.

I've been raging war with weeds in between rain showers. Trying to get ahead of the chickweed before they go to seed  otherwise the chickweed wins.

I wanted to tell you about my new adventure at the barn yesterday morning. It all started with a leaky water bowl. I noticed that the long big pen where our older heifer calves are housed was getting wet in one section. We couldn't see where the water was coming from. The pen was  cleaned out with the skidsteer and new bedding was put in. They seemed happy for a few days and then again, I noticed the pen being soggy in the same section again.

Yesterday morning I reached inside the gate to see if I could see if the bowl was leaking and I noticed that the heifer calves had pushed the water bowl a half a turn. It was loose and I could see water trickling a tiny bit and then it stopped. They would have no water to drink so I called my husband to show him.

We decided that the bowl needed to be replaced so we would have  moved all the heifer calves to the cow pen across the alleyway, maybe 8 feet away. It should be a piece cake cow patty.

One the the heifer calf decided that she didn't want to go in through the gate opening and chose instead to jump into the big cow trough and proceeded to try to get in through the stanstions where the cow put their heads through an opening to eat. She got herself good and really stuck. The front went in as she pushed real hard but the girl's hips were just too large to go through.  I wish that I had my camera with me. It was the most stupid position that she got herself in.  Her feet didn't touched the ground and she couldn't be lifted easily as she is around 275 pounds or more.

My husband is a wiz at math but rescuing a stuck bovine is not his strong point.  I called my son Vaughan  with a tone of urgency. Within minutes he was there and hooked up the winch with strap and chain but he could see that he needed another plan to get her out. He used part of the cow lifter frame and turned it on it's side to make like a table frame and put two narrow sheets of plywood to make a platform for her feet to rest on and he lifted her up high until her hind feet touched the floor and then her front feet rested on the platform and pushed her out from where she came in. She fell on the floor and quickly got herself up. I hope that she has learned her lesson but I doubt that she's got enough brain in that big head of hers.
He then replaced the water bowl with a brand new one and put some fresh bedding in their pen.

One little kitten wanted to be just where the action was and knowing that he would surely  be crushed, I quickly grabbed the said kitten and the little beast bit me on my right hand.  I should have picked him by the scruff of the neck but was in a rush to get him out of danger. I swung him out of the way and ran to pour rubbing alcohol on the wound. I keep a bottle handy where I work.

I have to be vigilant to not get cuts on my right  hand because I have had most of my lymph nodes removed from my armpit and I could get lymphedema for life if it gets infected. Lymphedema is a lifelong condition with lymph fluid retention causing swelling and pain which needs expensive treatments. Not a route I want to take.

I was so tired this afternoon that I needed a little nap before going to weed some more. I weeded about half an hour and there was a sudden downpour and I ran in the house wet, then it was time for more barn work. I envy those who can get away for the weekend. 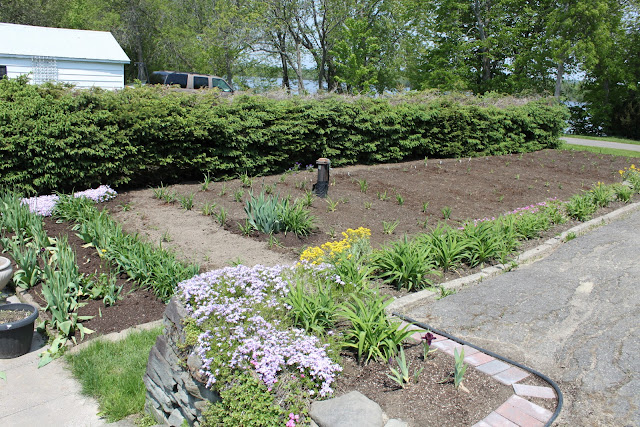 Here is the long flowerbed weeded. Yeah... I also put a small border at the end of the driveway. I dug out half a wheelbarrow of crushed rocks from that little flowerbed.It was really hard to weed. I put in a bag of potting soil to replace the crush rocks. It will surely be easier to weed. I used a coarse screen mesh to screen all the crush rocks from the end of that little flowerbed. 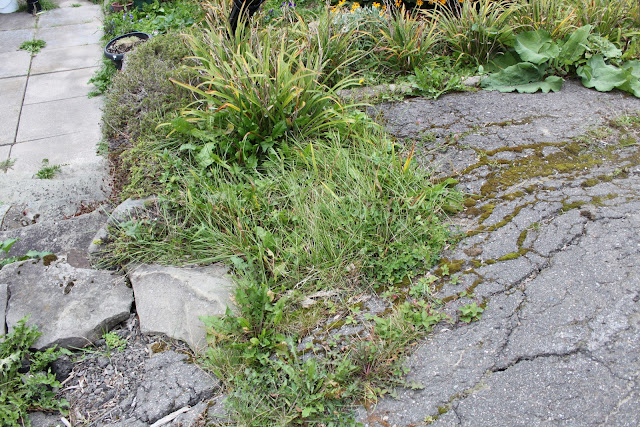 This is what it looked like last fall.  It was impossible to weed because of all the crush rocks in the soil. It was an absolute mess.


Tomorrow is another day and there will probably be nothing newsworthy to write about....

Thanks for visiting and stay safe. I appreciate you and your comments, however short just so I know you count me as one of your blogger friend. Happy June everyone, I hope it a good month for you.
JB
Posted by Julia at 8:53 PM 25 comments