NOVEMBER HAS BEEN UNUSUAL IN MANY WAYS.

November came fast and brought us winter and has been rather eventful...  It snowed a lot and it's been colder than I can remember in years, for November... I got 6 calves born in November so lots of extra work.

On November 5th, we had a huge power outage because of a  heavy wind storm. 40,000 household and businesses lost power. It took days to restore power to everyone. It affected our farm big time.  We had power surges that damaged equipment in the milking parlor and fried the deep well water pump, leaving our cattle without water. We have a large generator that we hook up to a big tractor to generate electricity to milk the cows and run feeders and other equipment.

We managed to get water by hooking several garden hoses to my sister in law's well pump. It had less pressure and it took longer to fill the many water throughs and water bowls. Washing equipment, etc, etc... It would take too long to describe all the repairs that needed to be done. Industrial electricians, equipment repairmen from another town and an industrial plumber were needed for some of the repairs, etc...

We had a new calf and the mother needed to be milked in the can so her calf could be fed colostrum milk.  I had to bring all my equipment, bottles, etc. home to wash and I took everything back to the farm in the back of my Nissan Rogue. Since there were two vehicles parked in front of me, and I didn't want to run over the water hose in case it would puncture on a rock or something and causing more problems, so I  backed out to return home. It was already late at night and it was dark and for some unknown reason, my backup camera didn't come on as usual and I backed up against the hitch piece of the big 8-foot snow plow that was parked next to the farm driveway, close to where my car was parked... It damages my bumper and reflector. I had it assessed even though it's just cosmetic damage and it would cost me $1200. to have it fixed. It's not going to happen... 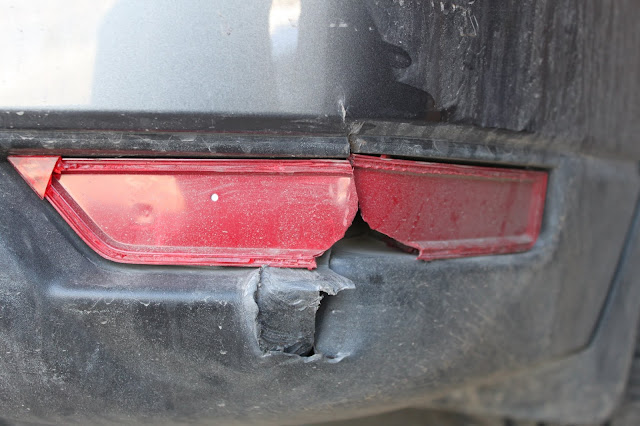 Somehow, our big bull hurt his hind leg badly and the vet told us to sell it for beef. He was put in a pen in my section of the barn so he could be picked up in a few days and I took care of him. He's not used to drinking from a single water bowl. He's used to drinking from a cattle water through. He must have gotten irritated to having to push the spout with his nose to get water and he broke the water connection with his powerful head.

When I came in the barn early on Saturday morning, November 10, the area where I keep the feeding hay was being flooded and I wanted to keep the hay from getting contaminated with dirty water from the pens. I tried to move the remnant of the round bale by pushing it to a higher incline in the alleyway. The bale went down but I lost my balance and fell in the water but I saved the hay, hehe. Yes, I got wet. What I wouldn't do for my calves.

Although I fell ever so gently, my body weight fell on my already damaged right shoulder. I could not lift my arm from the pain and had to call my son for help. His phone was in the kitchen so he didn't hear it ring. I called my husband and he came to feed my older calves and heifers and I fed the little ones since I didn't need to lift my arm to feed them.

Then, a week later, on Saturday morning on November 17th, I found a new baby calf with the dry cows. I went to call my son Vaughan for help, my foot got caught in the hose he had put on the floor to thaw the night before. I went flying face down on the cement floor and broke my nose. I bled like a pig. Luckily I keep a big roll of Bounty paper towels in the old fridge. My cap and my glasses flew. I'm lucky that my glasses didn't break or got scratched. They landed opened on the frame. 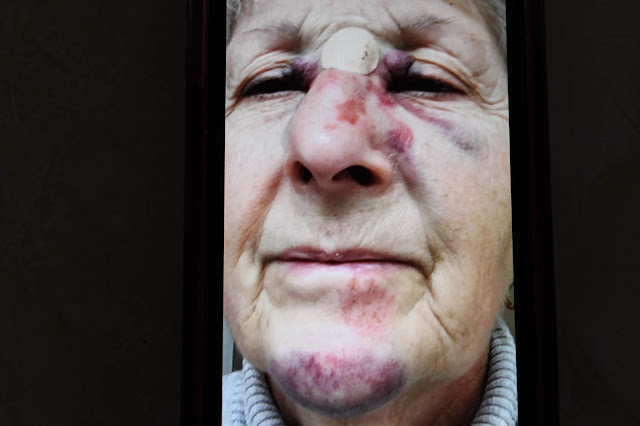 This is a picture I took with my Canon camera, of my cell phone selfie.  For a technical reason, Google thinks that someone is hacking into my cell phone when I tried to send it to my computer because I won't have my ID for my computer until December 20th. My computer doesn't recognize my cell phone or something like that. The bruises were more purple in the next few days. My nose was swollen. 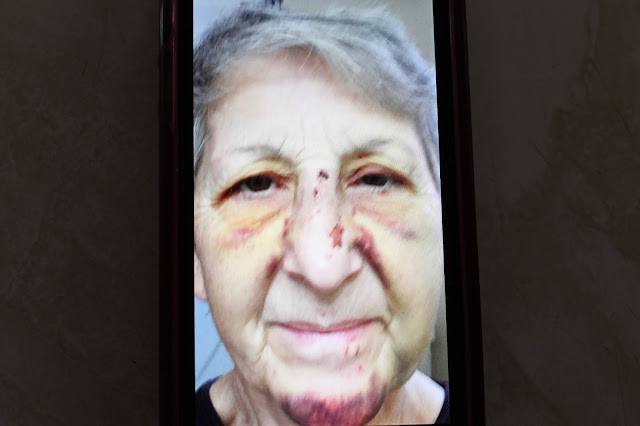 Then came the yellow. I apologize for the very poor pictures. My nose still very sore and swollen. 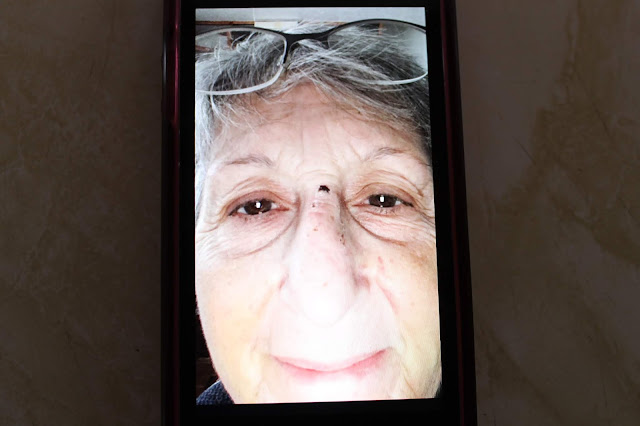 The bruising still visible but fading away.

Five days after my broken nose accident, on Thursday, November 22nd, my daughter Christine came for a 5-day visit with Daniel. I picked them up at the airport and she was horrified when she saw me. I didn't tell her about my injuries before because I knew she would have worried a lot. There is one thing about me that I know. I don't care whatever anyone thinks, it won't stop me from going in public. I went grocery shopping, banking and to church looking like someone had taken a baseball bat at my face. The only ones to ask me, "OMG, WHAT HAPPENED TO YOU? " were those who really know me well, the rest were too polite to ask so I tried to put them at ease.  After all,  it was what it was, an accident and nothing else. I guess the majority of people with such injuries would choose to stay home and hide. To me, the truth is what it is and I have nothing to be ashamed of. Today, my bruising is all gone but my nose is still very tender.

While my daughter Christine and the rest of the family was here, we celebrated my 72nd birthday, and my granddaughter Jordyn's birthday and also my retirement from working at the barn, all in one celebration... On my first day of retirement, I went on a trip home to the annual family Christmas party for 5 days and had a great time visiting, and came home on the bus, but that's another story for another blog post... 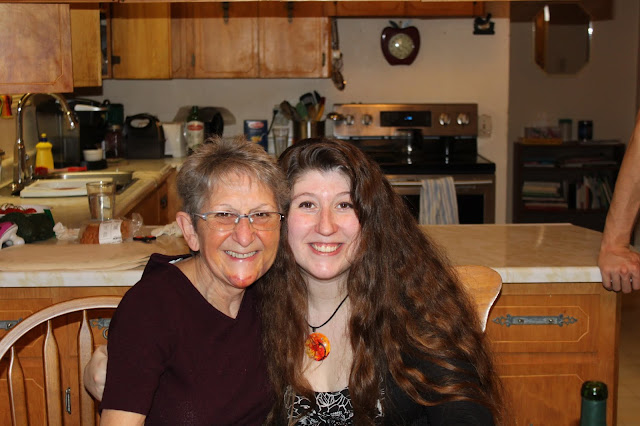 My lovely granddaughter and her 72 years old bruised grandmother.
My face is healing but still yellow from the bruises and my chin still a bit bruised. 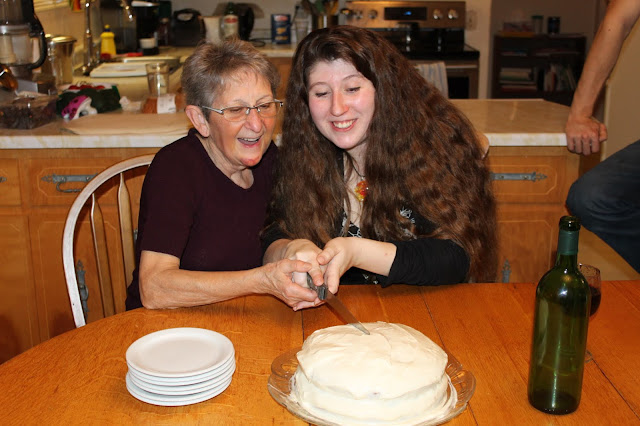 Jordyn and I cutting the multi celebration cake. Two birthdays and a retirement. 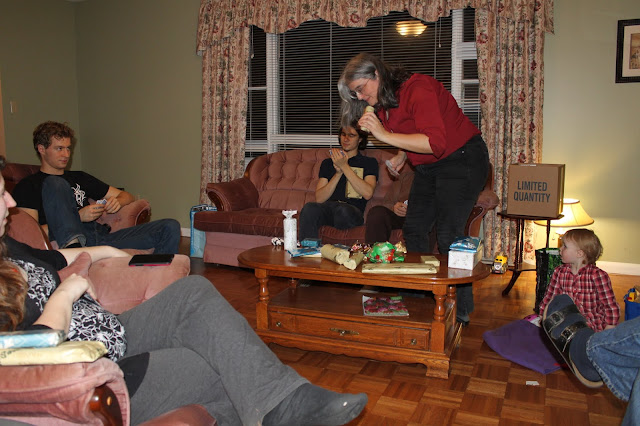 We played the present game while everyone was here. I think we had 52 presents in all for the game. 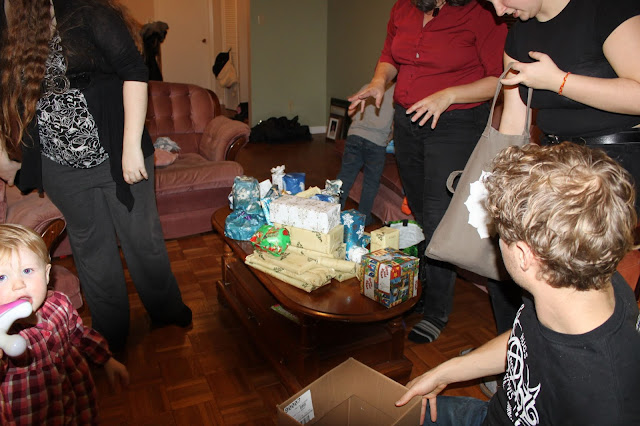 I'm sorry for the length of this post but November has 30 days and I left a lot out, believe me...

I hope that December is kinder than November.
Stay warm and safe.
Hugs, Julia
Posted by Julia at 3:40 PM 20 comments