When I went in the barn, first thing this morning, I checked in on the overdue  pregnant cow since I'm the first one there in that section of the barn in the morning and I could see that she was in labor and she was moaning but there were no feet sticking out  yet and she was doing the same thing yesterday. But I could tell it was very close to her time.

I gave her some hay but she wasn't interested. At this point I usually call my son to come and check for himself but I'm getting more used to it now so I don't panic like I used to.  I'm so sympathetic about their pains though, being a mother and all that.  So I fed the barn cats and gave feed to the calves and bedding and eating hay and went down the other end of the barn to prepare and warm up  their milk.

When I returned  I could see huge feet sticking out so I called my son who was milking by then and the milk tester was there so he suggested that I call my husband. At this point the cow was down  and her rear turned against the wall making it inaccessible to any assistance that she may need. My husband arrived, and neither of us could get her up at this point. She just wouldn't budge.  My husband thought that the calf was coming out backward and could see the size of the calf by it's hooves and he called the vet. He decided that he had no time to waste and put chains around the calf feet and pulled and before I was able to offer help the calf came out very easy.  The calf was in the right position after all.  That was lucky. He cancelled the vet call.  The huge calf was a bull,  Not so lucky.

After my regular chores were done I went to town to pick some calf feed and ear tags for the cows, went to fill  my near empty gas tank and returned home. My husband  arrived home shortly  after me with the truck and asked if I went through the check point by the Experimental Farm ,  (* my car was due for an inspection in September...). I said no. That was lucky for me and lucky for him because he had the truck inspected just  last week.
I reminded him to make an appointment to have my car safety inspected and I was lucky again to get an appointment for 2:30 pm. this afternoon Then again no so lucky because I need a new ball joint and have an appointment for Friday... Then I got an email from my daughter Christine who was relieved that the ultra sound shows that it's definitely a boy and that all seems to be developing as should be at 24 weeks. Another lucky. So went my day.  JB
Posted by Julia at 8:56 PM 6 comments

To reassure Pat, the big MOUSE drama is over and now is the time to brag about my hunting abilities. I'm sure that the little mouse was a good mouse and though it didn't had time for a quick prayer before it's demise, it's in mouse heaven by now. It was quick and merciful. That makes me feel better, poor little thing. Now the second trap is all set just in case the mate decide to come looking for it's partner. They say that if there's one there are probably two.  I figure that it came in when my husband was bringing the potatoes in the basement and left the door opened long enough for the opportunistic critter to sneak in. No pics of the hunt, I just couldn't.

Farm girl wanted some photos of the clean milking parlor. It's quite an old set up in need of replacement but I didn't take any photos of it yesterday. There had been last evening's milking and this morning's milking so if I took a photo now it would show the cow's mess they left behind so since my camera's battery is on the charger until noon, I'll dig out some photos that I took after the devastating flood of 2008 after the milking parlor cleanup. It would look exactly like it looked after I cleaned it up yesterday. And Farm Girl, thanks so very much for your prayers for my daughter and her unborn son. She was having another ultrasound this morning and couldn't sleep from anxiety last night. I'm still waiting for any reports. This must be so difficult for them. 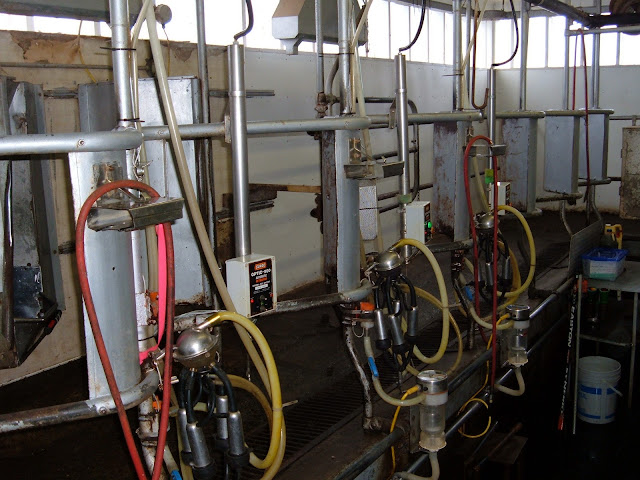 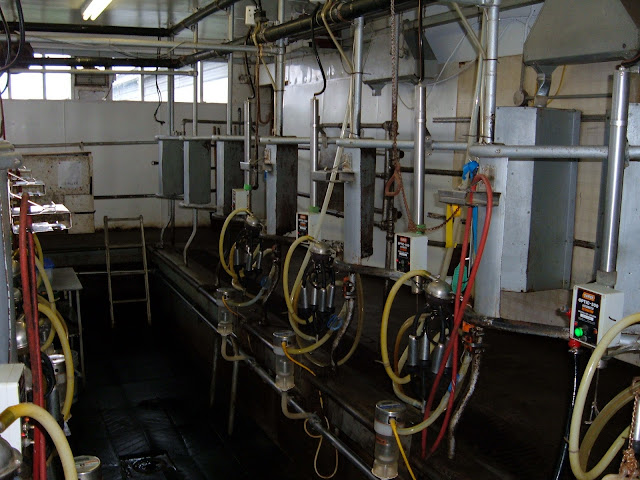 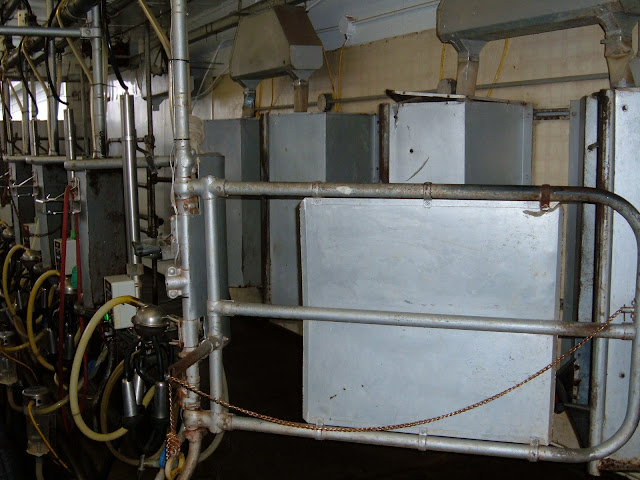 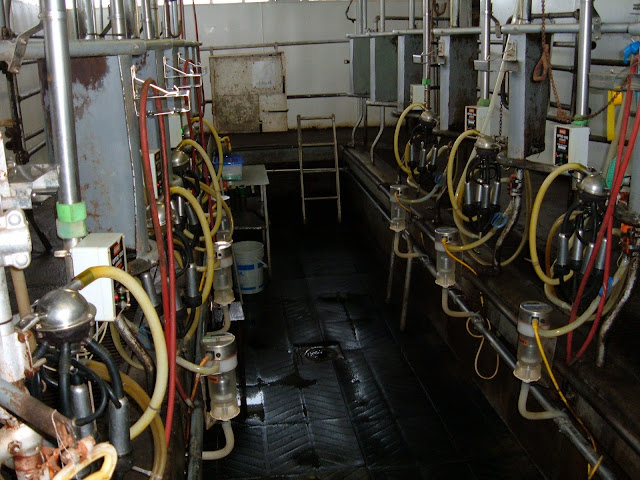 And Kim, as you know, even though I didn't had my moose hunting license and I wasn't wearing a hunting vest and hat, I got my moose.

Katie, I'm aiming to bottle those hot peppers this evening if I get the chance.

Please join me in a prayer of thanks for the successful rescue of the trapped minors in Chile and the way  God spirit works in bringing countries to cooperate and work together to free those minors. It proves that every human life has value. Bravo to the rescuers and Bravo to the minors for never giving up hope. JB
Posted by Julia at 11:47 AM 6 comments