My son told me this summer that we would have about 12 cows calving around my birthday.  I don't know if he thought that I would love to have that many calves to take care of all at once.  The due date is November 24th and all ready we had one born yesterday and two this morning, a week early. I had my hands full as we had to move a bunch of cattle for sale and the buyer also was buying the small bull calves. Needless to say the calves were born  in the back where the dry cows are and it was not the best place to be born. On a hunch, I sent my husband to check this morning and sure enough there were two little calves that had been born in the early morning.

I don't know how I do it but I can almost tell every time when there's a calf back there. It's like I have a sixth sense. I don't have photos of the new born as it gets pretty involved when I'm working and the last thing on my mind is taking photos.

Yesterday morning on my way back home after my chores I saw a small cow that looked like she was trapped in a narrow enclosure as the gate had moved against a field plow. As I moved closer I saw that she was not trapped because there was enough of an opening for her to go through but that she looked like she was looking for a place secluded to calve because her tail was up and I could tell that something was going to happen.  She didn't looked like she had a big belly though.   I told my son and asked him to check in on her after milking.  He said that she wasn't due yet but that he would look in on her after he finished milking.  By the time he was done, she had calved outside. 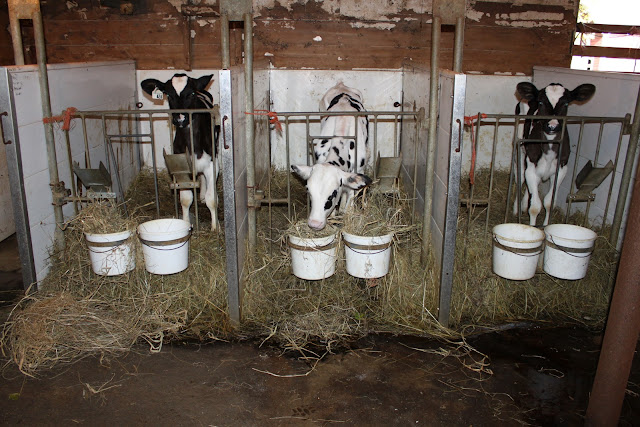 This is an earlier photo of some of the calves when they were small not very long ago and now they are weaned  and ready to move in one  the big pens to socialize with the bigger calves so I'll have to clean more pens for the new recruits. Notice the pails full of hay. Some kids were visiting the farm and filled the grain and water pail with hay, lol.
Thanks for visiting my blog and leaving comments.   JB
Posted by Julia at 10:34 PM 7 comments