IT'S BEEN A VERY GOOD SUMMER

Despite a very busy summer, it has been a very good summer. The gardens have been very productive with the frequent rain, the haying season has been going well despite breakdowns in machinery, the hay barns are getting filled and farmers are picking large bales of hay from the fields by the transport loads.

I apologize for not being a good blogger but by the time I come in, I'm usually too tired to post. I sit at the computer, check my emails, watch a few podcasts and play a few games of Freecell and go to bed. I have had several people contacted me, worrying about me because I haven't blogged lately. Thank you for caring. Sometimes, I need to be reminded that people read my blog. That's a good enough reason to keep on blogging.

I took some photos of my flowers. I hope they don't bore you. Growing flowers is one of my passions. 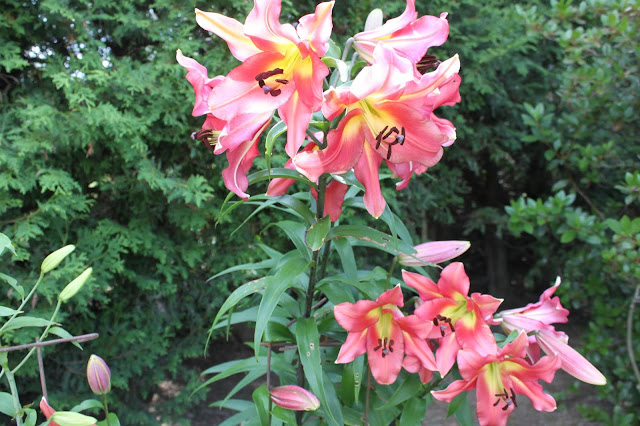 These giant lilies are called Satisfaction, this is their second year. I wasn't sure they would survive the long period of being underwater during the flood. 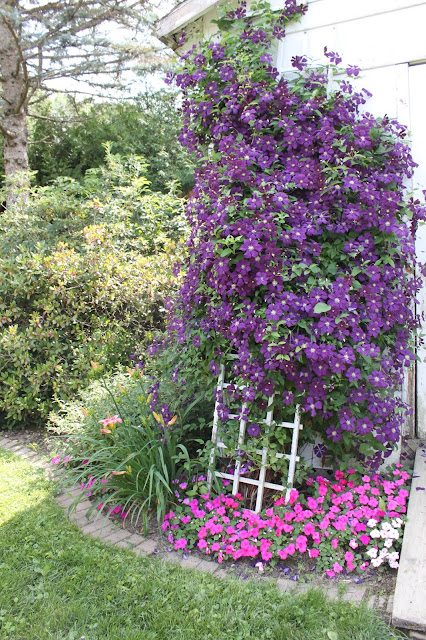 My old Jackmanni clematis never fails to put on a show in August. The trellis was lift off the track up top during the flood and floated away by the shed. I just propped it up against the building and the Clematis gingerly started to grow to the top, keeping the trellis in place, even in the big wind we had. 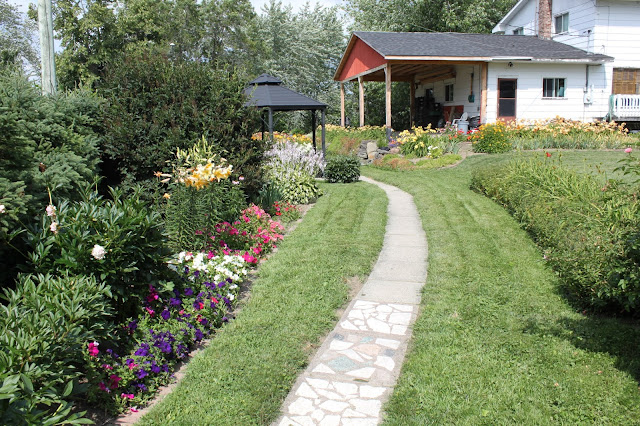 A view from the shed where there used to be tones of soil this spring. 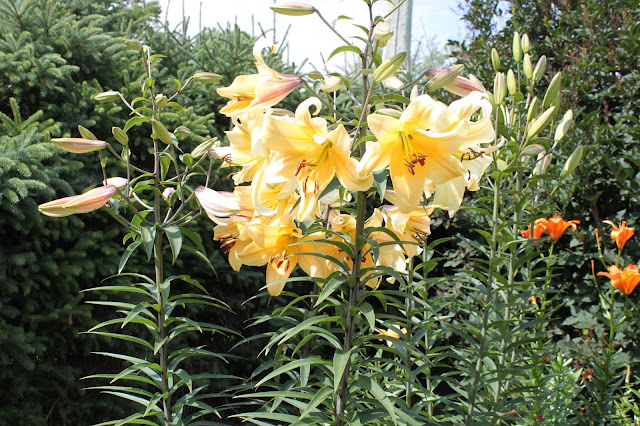 I can't remember the name of these giant lilies but the name is on a label in the garden. It's dark outside so it will have to wait. 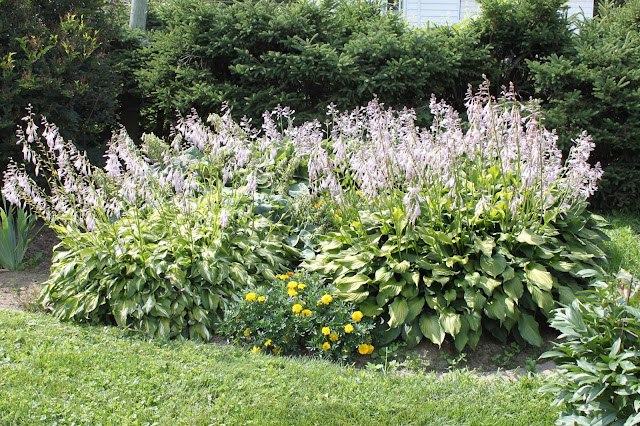 My patch of hosta hiding a large decaying tree stump. I have some Marigold growing in the center but from this angle, you can't see. 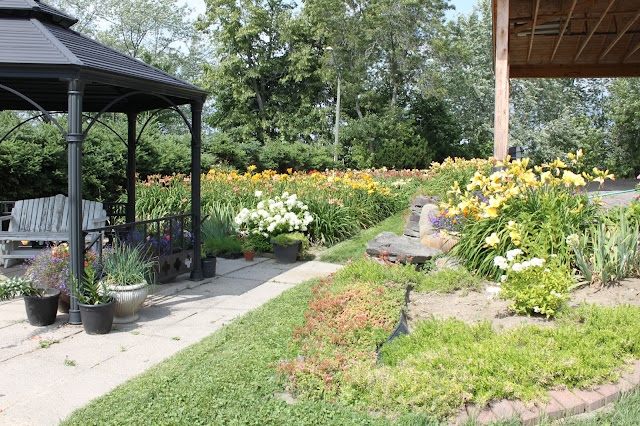 A washed-out photo of my daylilies.  Taking photos in full sun is always disappointing. 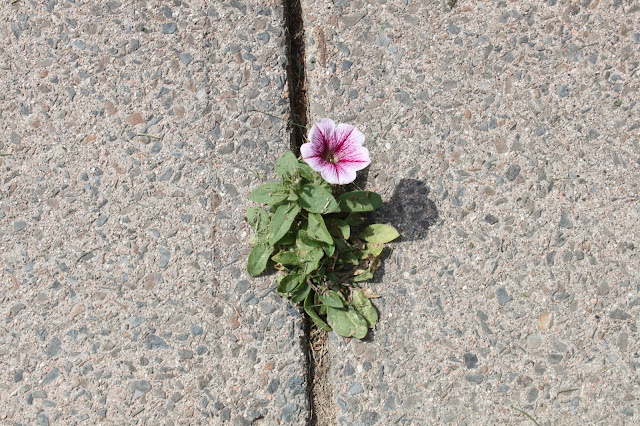 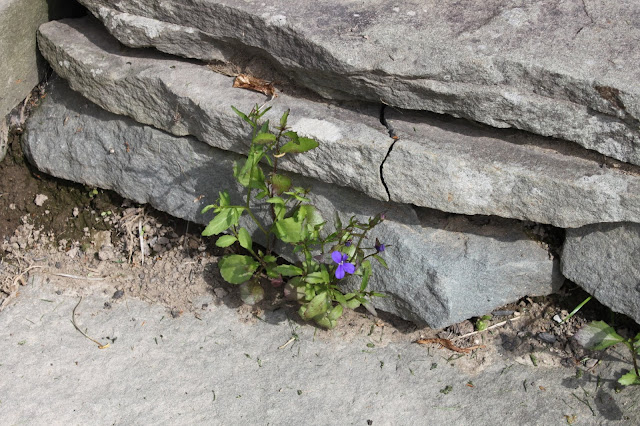 More serendipity Lobellias growing in the rocks.  This is just a small one. I have several that came up from last year. It has more blossoms now. 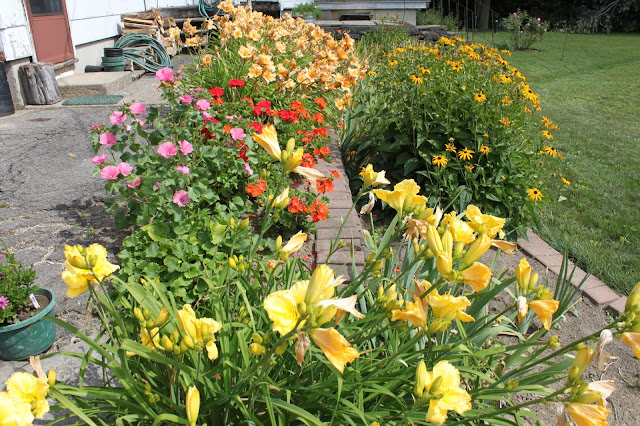 Some more lilies, Lavatera and Geraniums. 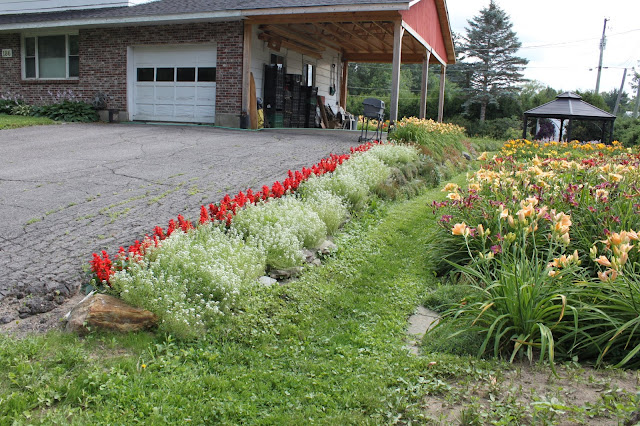 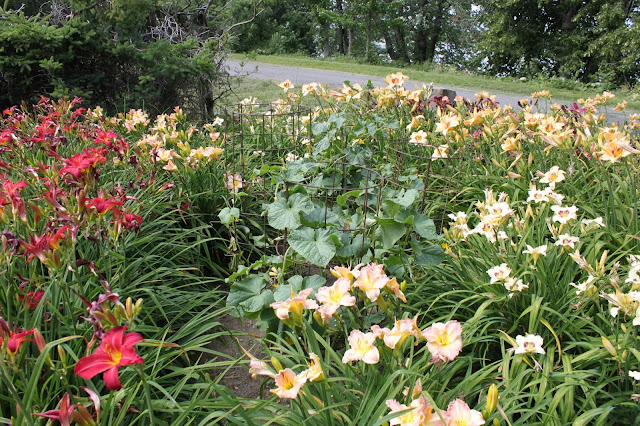 English cucumbers making use of a bare spot in the Daylily bed.  They are so delicious and tender. 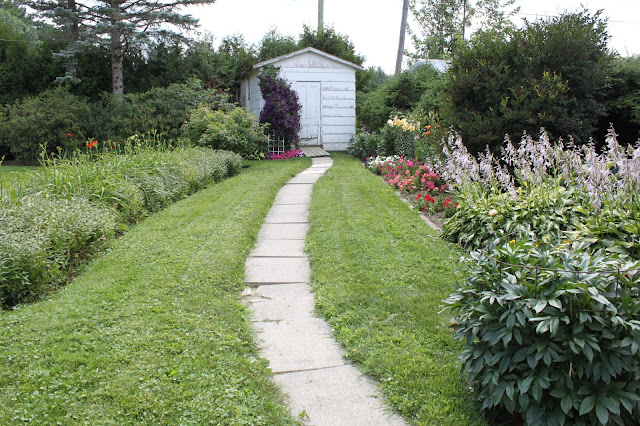 Another view from near the gazebo.
It's getting late so I'll continue showing you what I've been up to in another post. I'm so behind... Remember, if you are a follower and you leave a comment, I will surely leave a comment on your blog. I don't spend a lot of time on the computer these days.

Stay safe and enjoy the rest of the summer.
Hugs, Julia