I've made a lot of progress since I blogged last. I've gotten plenty of exercise running up and down the stairs from the basement to the garage hauling heavy ceramic molds and I'm happy to report that I've hauled the last one up yesterday. Not a single mold left in the basement. My butt muscles are thanking me, lol...

I would be happier if I had no more molds left in the garage but a few more pick up truck loads and they will be all gone for good. There is no more ceramics glaze or paint in the basement either. Only equipments and I'll deal with those later.

Now the floor cleaning can begin but I still have some stuff to move out of the way first. I'll take my time but it will get done sooner or later.

I almost forgot.....Several of my bloggers wanted to know what I did with ceramic molds. I'll give a quick explanation....

I used to run a ceramic greenware manufacturing business and was serving ceramic studios from  all over the province until I decided to close up shop to do something else.

Ceramic molds are made of absorbent plaster of paris in which a earthenware  liquid clay called slip is poured in. The water in the slip is absorbed in the plaster mold and when the wall of the casting is thick enough, the excess clay is poured out and the clay coating left in the mold is left to get leather hard before it can be safely removed from the mold. The mold is opened by removing the elastic bands that holds it together.  The shape is left to harden after removal. The clay shape is called greenware because it's just a piece of fragile clay and need to have the seams smoothed out and then fired so it can become hard . It can be painted or glazed like a cup for example. I'm sure you can google How to pour ceramic molds on Youtube to see how it's done.

I used  a pouring table with a motorized pump like a gas nozzle to fill big molds and I could pour a multitude of molds in minutes when I was in business years ago.

REPORT ON MY PROJECT School supplies for Josephine's underpriveledged children in Uganda...

On Monday I started to tape the package to send to Vicki of 2 Bags Full but my packing  tape gun ran out of tape. It was my last roll. I didn't had time to pick some on Monday so I picked some yesterday. I got the parcel all ready for mailing, addressed and although it was raining cats and dog, I had the time to go mail it. I placed it in a white  plastic kitchen garbage  bag to keep it dry and off I went with my windshield wipers going at full speed. I had thought of bringing a printed photo of the content and decided that I would write Gift of School Supplies  for underprivileged children on the label at the post office. 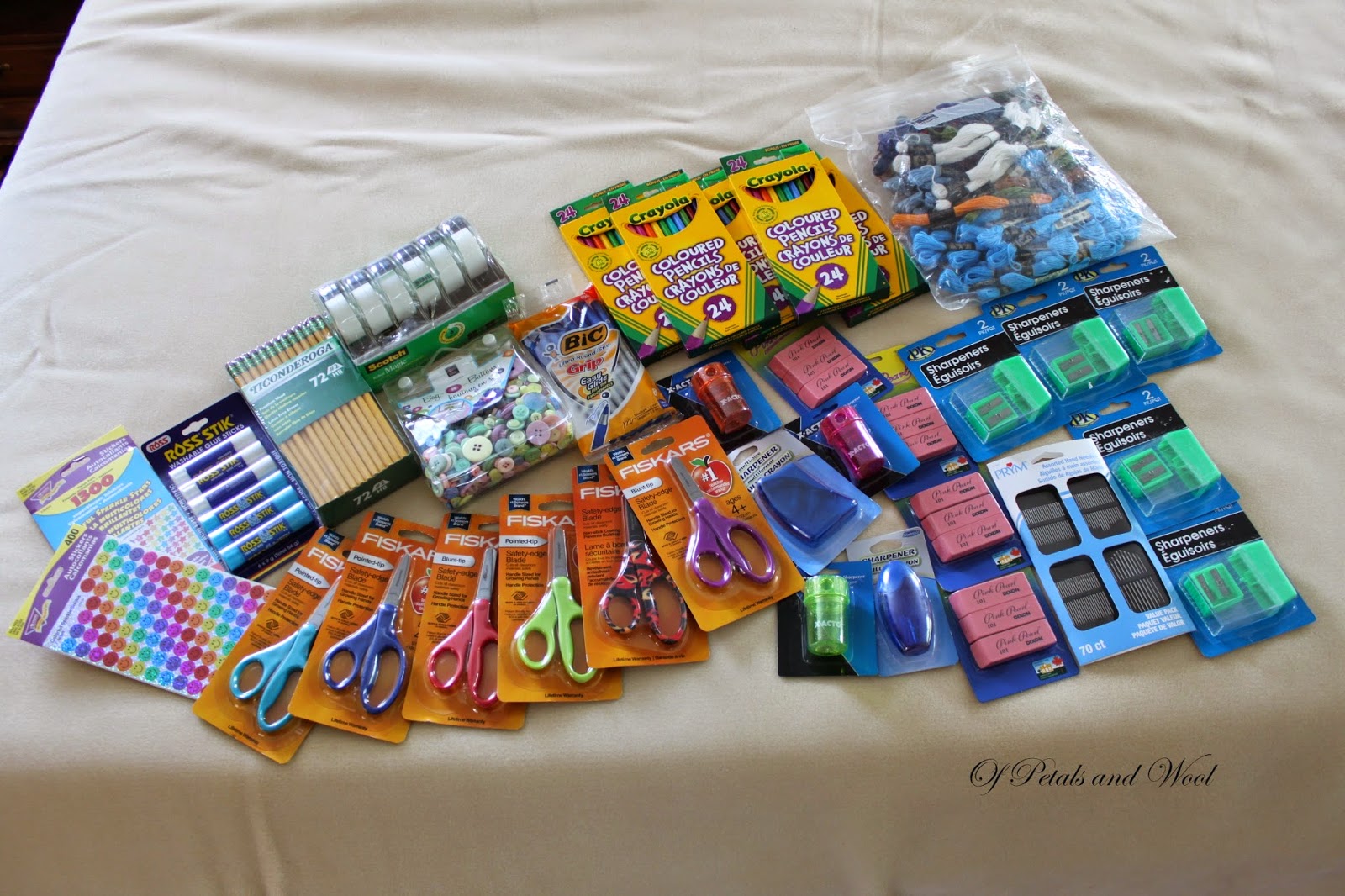 We have several post office in the city but I kind of like the one across town on the other side of the river. They are about the most friendly and helpful people. It's about a 15 minute drive one way so it takes about half an hour both ways depending on the traffic and time of day.

At the post office, the yard was full of cars but luckily one pulled out as I drove in.
Inside there was a slow moving  line up waiting with assorted parcels and packages to mail to the US for some odd reason. The staff were trying to help the customers processing their packages. It was taking longer than usual. The girl explained it was because of the new regulations for international security.

While waiting for my turn, I notice a sign on the wall about the new requirements for mailing a parcel to the US or internationally in accordance with international security and trade regulations. I picked up a the information and read as I waited.

It suggested to prepare the information on line before proceeding to the post office to speed things up by getting a bar code on line after filling up the form and itemizing every objects in the parcel and their individual value.
I was afraid of forgetting something and compromising the delivery of my package so I returned home and printed the same photo of the content that was on one of my blog post entitled "REFLECTIONS FOR CHRISTIANS " and tried to fill the proper info but there wasn't enough lines to list everything.

Undaunted, I put my package back in the plastic bag and hop back in the car and away we went with the wipers still doing the swishing back and forth dance. To my delight, there were plenty of parking spaces this time but the rain was coming down in buckets.

There were no costumers ahead of me this time and I explained my problem with filling the online form. I showed the staff the photo of the content and they said, no trouble. Just give us a few minutes and they will figure it out. That lady and the gentleman were so helpful and filled up the information on the form and  into the computer and gave me the tracking number  and mailed my package to Vicki.  So hopefully Vicki will get the parcel as soon as possible so Josephine's children can have some school and craft supplies sometimes in December.

So now my parcel is on it's way to the USA. So I'm happy even though it took me an hour's drive to go mail my gift to Josephine and her children. Oh, it had stopped raining when I came out of the post office. The traffic wasn't heavy either.

Another thing that's making me happy is that our potatoes were harvested before the heavy rain started. 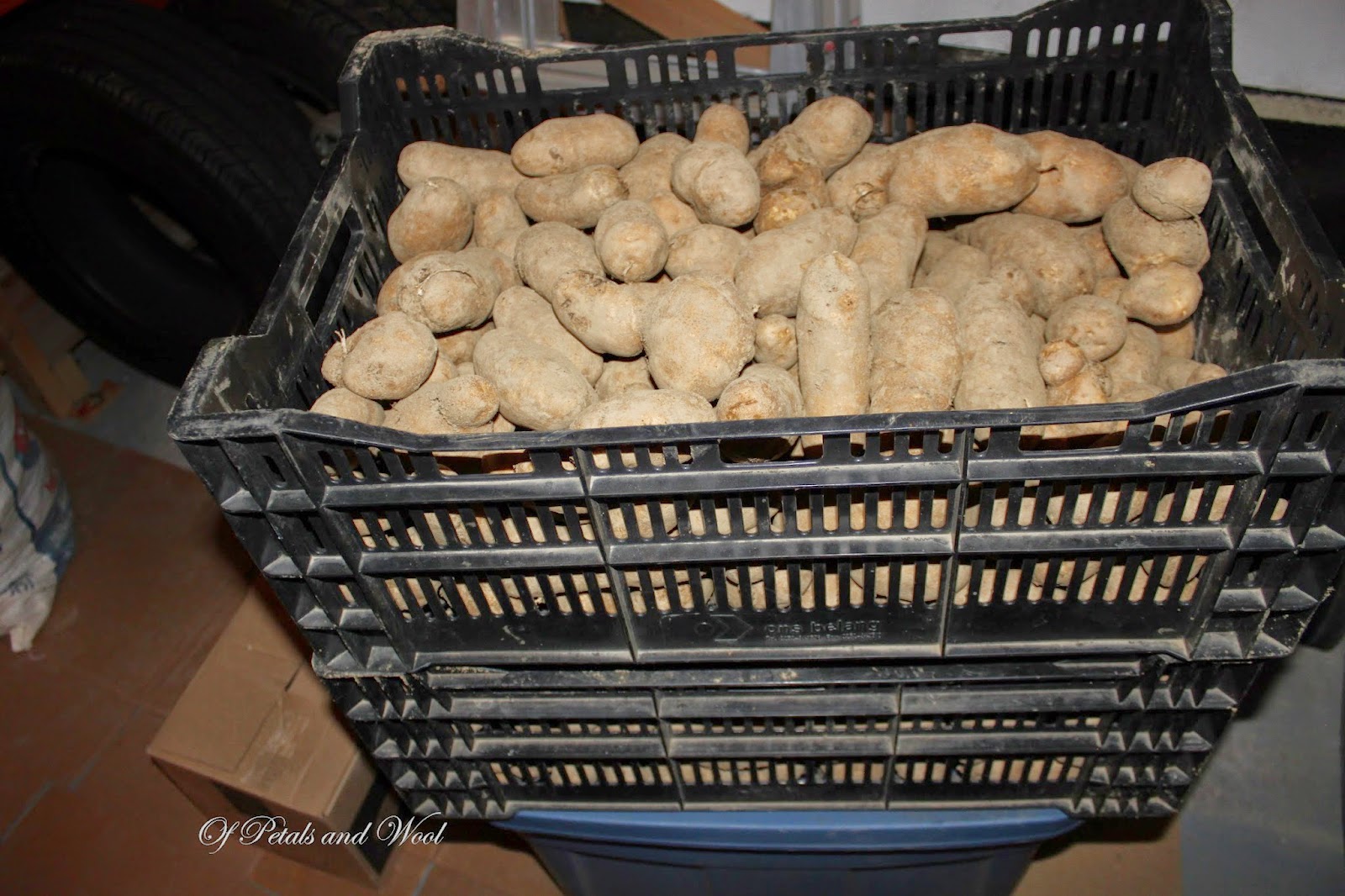 My husband only planted a short row this year. He harvested two trays. That's plenty for us.
Thanks for visiting. I always love your comments.
Until next time, have a nice weekend.
JB