LOLETA GETS WHAT LOLETA WANTS...

It sounds racy but sorry folks, it's not like it sounds although we had to race against time...

We have a celebrity cow in our barn, sort of like... a movie star... cow. It all began on a beautiful Saturday morning on January 30th, 2009 after I had done my chores and had returned home and my husband had just gone back to the barn to do some electrical repairs in the ceiling of the bedding barn when he noticed that the rafters were sticking out through the windows. The roof had collapsed under the weight of wet snow shortly after I had left the farm. There were 70 milking cows trapped in there. Luckily they had just been milked shortly before this happened.

My husband called 911, my son and I and then he called a farmer who contacted other farmers and a chain reaction of communication happened.

Within minutes help arrived from  the farming community, they brought chain saws, ropes and halters, many with cattle trucks to transport animals to another farm and they worked feverishly all day long with the fire department rescue team.

Holes had to be cut out from the side of the barn to rescue one animal at a time. The ones who were  trapped in a bad position couldn't move and had to be treated and dragged out.  Finally they were all rescued and after all the commotion they had to be milked late at night and then bedded in an area where they usually eat feed.  Everyone was exhausted but thankful no one was hurt. 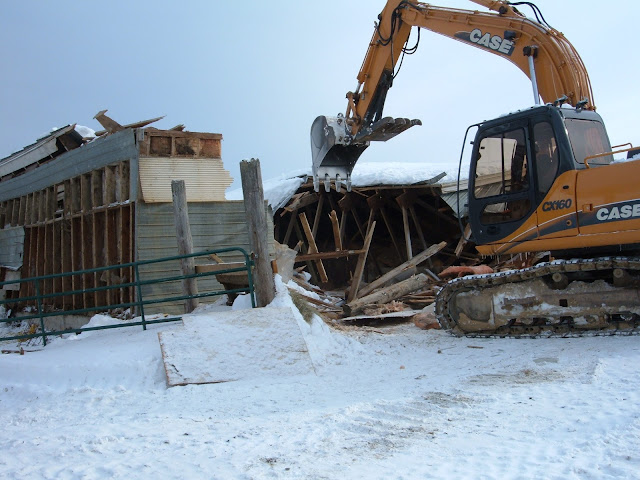 The next day my husband hired an excavator to demolish the old barn so construction could start as soon as possible.


What has all this to do with Loteta you asked!  OK, I'm getting to it... There were reporters all over the place for days, newspapers, TVs and radio reporters all wanting pictures and a story. Needless to say non of us were in a mood to satisfy their curiosity as we were dealing with a very serious situation and we were all trying to evade them as we were trying to come to term with the catastrophe. We were in shock, and tired. But they kept coming.

About a week later a  reporter wanted to check on how we were doing and wanted to take a picture of my son with one of his cows and that's when cow #273 named Angel cuddled up to my son and the photographer snapped photos as Angel draped her long tongue around his chin. This photo was on the front page of the local newspaper and also won the photographer an award this past May. You can see Angel's picture licking my son's face at    http://www.atwphoto.com/CowLick.htm

The community had a fund raiser to help us and a friend quickly made herself a cow costume with a bib utter and called herself Loleta and she also nicknamed the famous licking cow Loleta.  So this September when Angel gave birth to a heifer calf,  my son named her Loleta.

Now Loleta is not like the other calves. She was born September 1st but has unequivocally refused to drink from a pail at the appropriate time. She would not suck on my fingers, only on a nipple attached to a bottle.  She was a bit small so I did not rushed her. I gave in to her whims. But finally at 3 weeks I put my foot down. I tried to have her to suck on my fingers and lower her head into the pail like the other calves  and nothing worked, I tried tough love. She would rather starve than lower her standards.She drank fine from the bottle.  She knows that  Loleta gets what Loleta wants. But f-i-n-al-y at three and a half weeks I won. It was a battle all the way but now she drinks from the pail but she know that's she comes from a celebrity. 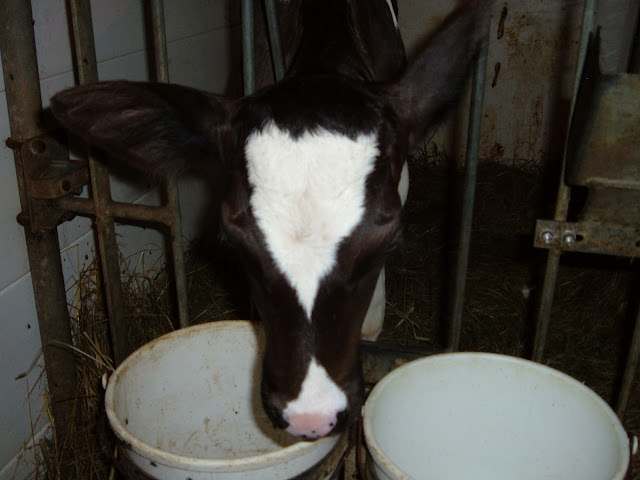 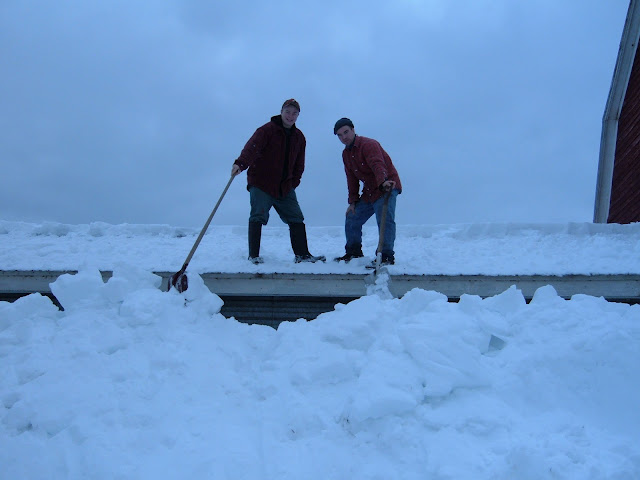 Shortly after the collapse, the two young hired hands shoveled the roof of where the cows had to be bedded down, in the feeding barn 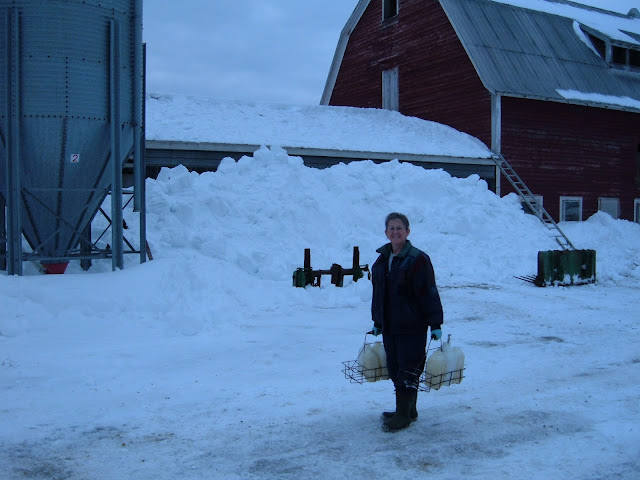 This is Julia the milk maid caught on camera by her hubby, notice the sexy boots.
Thanks for your visit, please come again  JB
Posted by Julia at 9:22 PM 14 comments