We woke up to a fresh coat of soft snow on the ground for Christmas morning and the sun was shining. It was glorious...  and on Boxing Day the kids went wild in the snow. 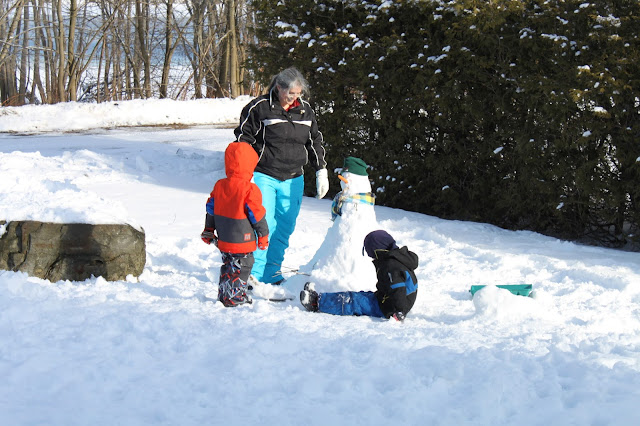 Christine helped the boy make a snowman. They even made a snowdog, but it's not finished in this photo. 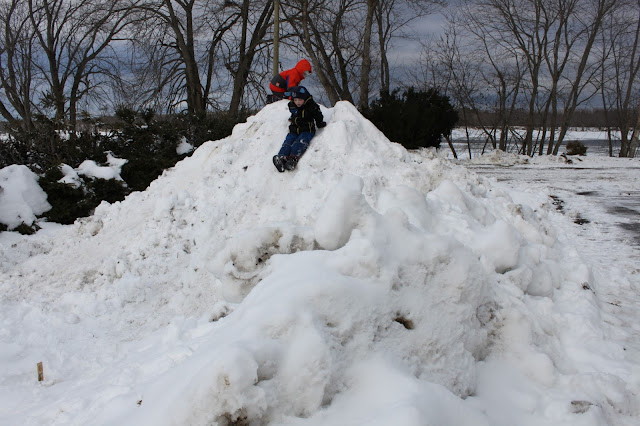 Grampy George made a snow mountain for James and Daniel to slide down from. 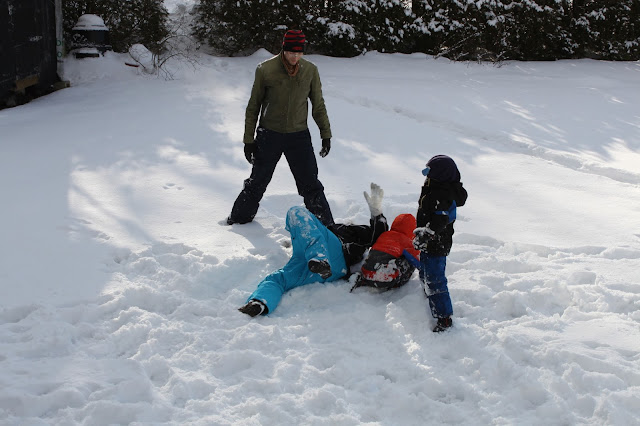 Mama and Daddy had snowball fights and tumbled in the snow. James is enjoying his hot chocolate milk after  playing in the snow. He looks exhausted. 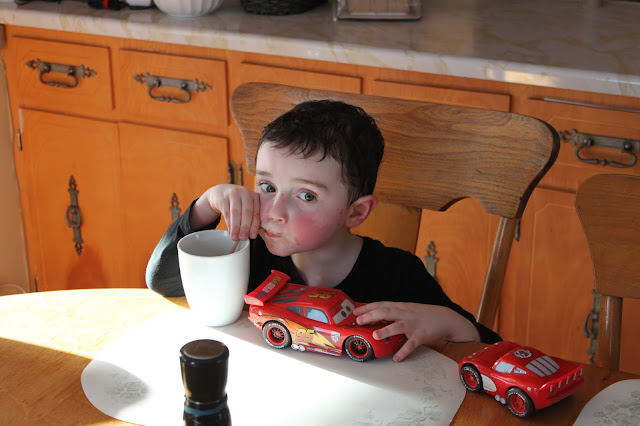 And so is Daniel.

Christmas was busy as usual with family and stray visitors and little people. I kept my spending in check and as per my budget but everyone got plenty of gifts under the tree. We kept up with Christmas traditions of going to church for the Christmas mass. We no longer have midnight mass at our church.( No Pics.) 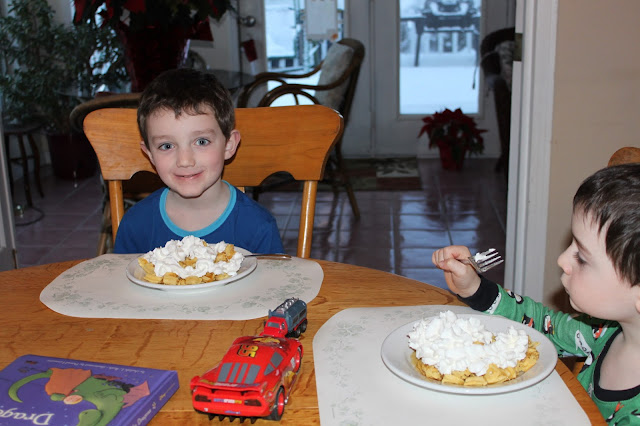 As per tradition, Joe made Belgium Waffles with real whipped cream topping and the boys devoured every bit of it.

Another Christmas tradition Christine started is The Elf on the Shelf brings a new book during advent right up to Christmas Eve.  His name is Choir and he brought the book you see on the table. Choir watches to see if James and Daniel are good boys and reports to Santa.

The Christmas turkey was huge as we were 18 for dinner. I roasted the turkey and the girls did all the rest.  That was easy on me...  Roasted turkey with sour cream mashed potatoes, carrots, squash, peas, cranberry relish, dressing, gravy, Broken Glass dessert to crown the meal and wine.

Sorry,   no one thought of taking a picture of the food but the  kid's plates were filled first as Daniel wouldn't wait a minute longer. 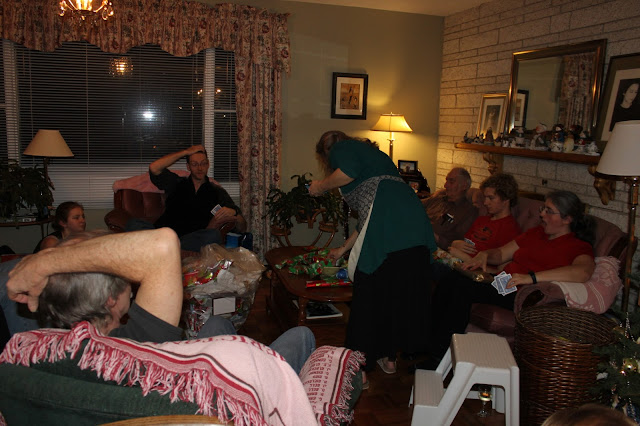 There were so many presents for the game that it had to be played twice so not everyone is shown here. 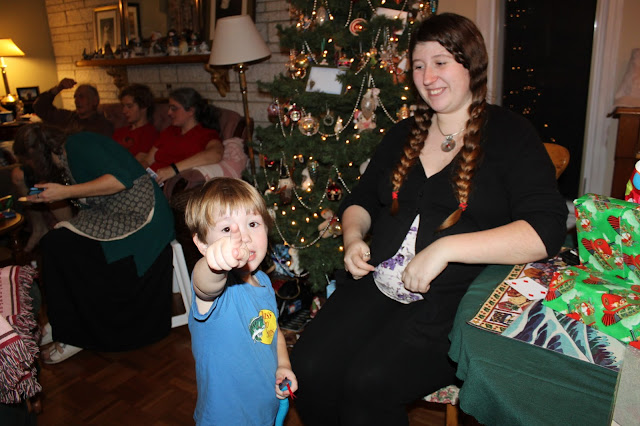 Cypress wanted to use my camera to take photos. 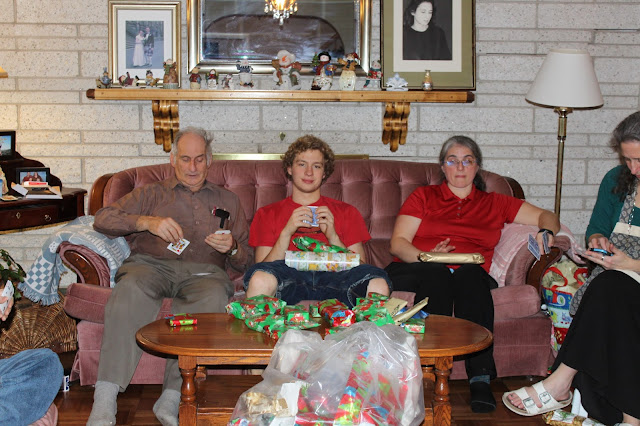 Liam got some present on his lap and grampy is calling the cards. 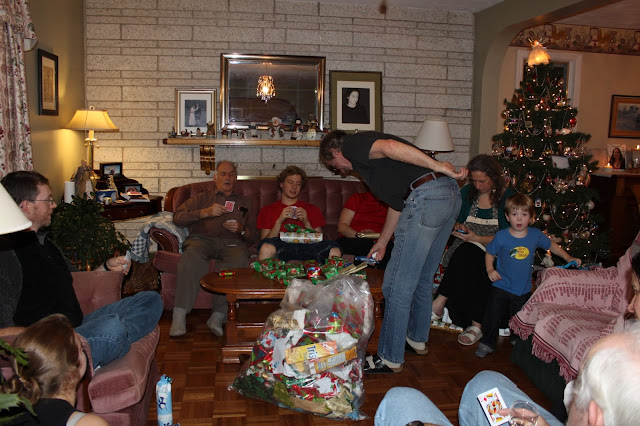 Bill's turn at choosing  a present. 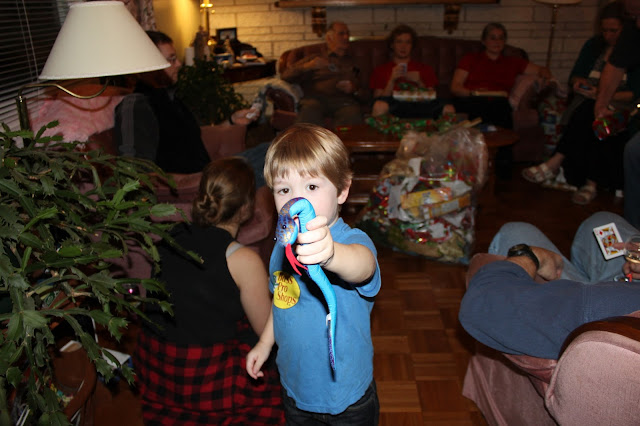 This is one of the many present Cypress won in the game. 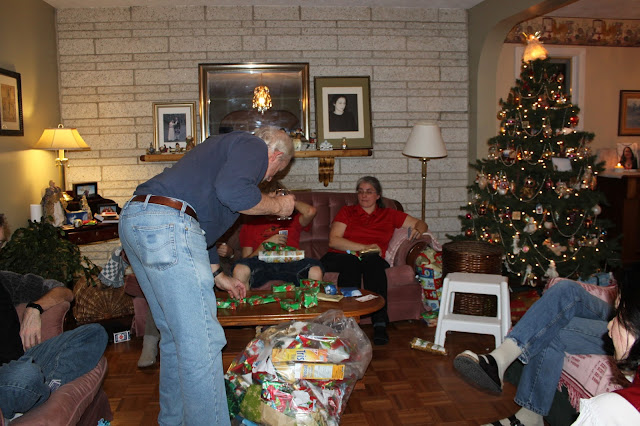 Our new tradition this year was a toast of Scottish whiskey to remember Nicole. Everyone got their turn to talk about a memory about Nicole. There were tears and laughter in remembering and lots of hugs... This was a solemn time. A photo of Nicole was on the buffet with candles that were blessed. 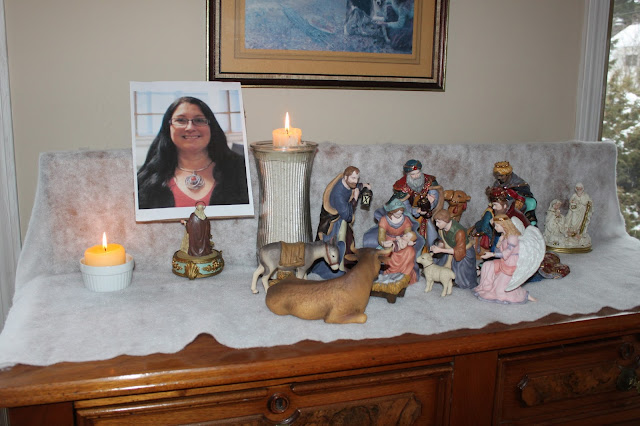 Nicole was much present in our hearts. We also held my brother in law, Henri and my sister Leona and family in our thoughts and prayers as he's is in Palliative Care in hospital during the Holidays.

We worked on a puzzle, another tradition we usually do on Boxing Day. Jackie got the puzzle out  on Christmas afternoon. Christine and I finished it late that night and we went to bed.

This blog is to record these memories for posterity.  I missed taking a lot of pictures but at least, I have mentioned how we spent Christmas Day to the best of my memory.

Now on to the New Year. It will be a quiet event for us. No sparkles or gala but a quiet evening at home.

Thank you for stopping by and leaving a comment. Happy New Year everyone.
Julia