One of our dairy cow thought that she would take the boredom out of my boring routine this morning. My clock radio had just turned on and I thought that there was no reason to rush so I fluffed up my pillow and closed my eyes for a few minutes while I listen to the radio. Yes, that all I got...a few minutes because my husband called for help.

Apparently when he was milking the cows, he opened the gate on the right to let the cows out of the milking parlor while he milked the other side. One cow stopped and stuck her head in the door to the milk house, as they sometime do,  but this  time a wryly  cow behind her pushed her and down the metals steps she went, right into the milk house where the big milk tank is and proceeded to stick her head in the office doorway.

My husband is not a quick thinker in emergency like  my son is. He should have put a halter on and ties her to something until help came but he opened the door and out the door she went for an early morning stroll in the snow. The temperature was very mild and the snow was melting. What a better time to  make a break to freedom.

My job description was this:  Go look for the cow. The last I saw her, she was heading toward  the silos....Bring a flashlight as it's dark out there....  My husband  had called my son but it takes him longer to get his bearings in the morning.
I got dresses and grabbed the flashlight and went looking for cow tracts in the snow.

What I saw didn't feel good.... her tracts were heading up the lane to a very busy highway even this early in the morning. I called my son to get him to rush because of the situation and I kept on walking up the long lane with my flashlight meeting a car coming toward me in the lane. He kept on going and I figured that she was on the highway by now. I was worried that she would cause an accident and someone would get seriously hurt or killed.

I walked all the way up the lane with my flashlight and suddenly her tracts shows that she's changed directions and is returning to the farm. The cars noises must have scared her off.

I call my son again and told him of the situation then my phone went dead as I had forgotten to put it on the charger last night.

When I got to the turn near the silo, the tracts showed that she had climbs on the snow bank and backs up and then her traces disappeared. The car that came down the lane has covered her tracts with slush... It was a mystery where she went. Then I see the tractor with it's lights on coming down the lane. My husband had gone up the highway looking for her and was coming back empty-handed.

We all  walked toward the milking parlor end of the barn and picked up some of her tracts again. She had gone in the back of the barn where she was waiting to get in the barn at the back gate. My son went in the barn and let her in. I can hear all the cows giggling about her escapade.
After my chores I went home for breakfast.

Sorry, at 6:30am, I don't carry my big camera with me, so no pictures of the escapee cow so instead I have a picture of our melting snow. We are having some real mild temperature today for a change. 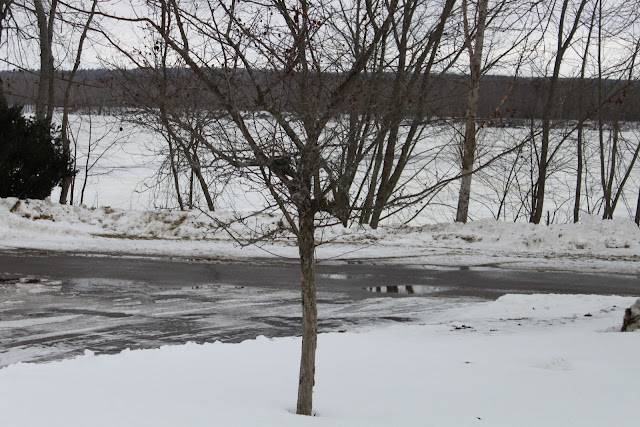 I hope that you enjoyed my true story.
Have a great weekend and thanks for stopping by. I enjoy reading the comments that you leave for me. They are like wonderful little presents that brings joy to my heart.
JB