Friday was nice and warm for a change and I decided to go for a walk in the pasture with my  camera and my new big lens. I wanted to take some  pictures of the eagle's nest way way up on the very top of an old pine tree in the lane.

A pair of eagles have been living in that nest for about 7 or 8 years or so. The nest has grown every year and it's incredibly large this year. It's hard to get a perspective on how large it is but my guess is that it's about the size of a car and my son agrees. 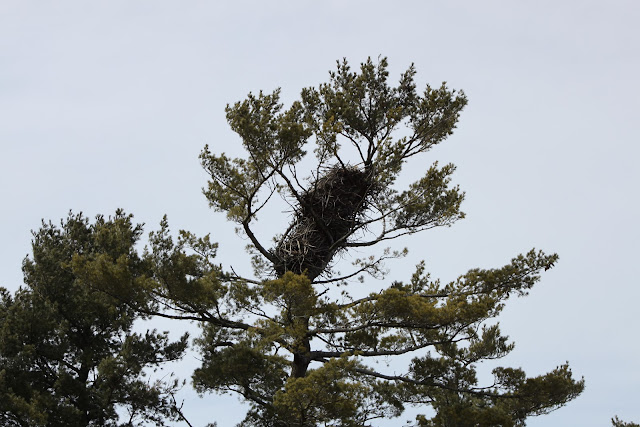 Here is my first shot with my telescopic lens. I was quite a distance from the tree. This shot is from the pasture behind the barn. 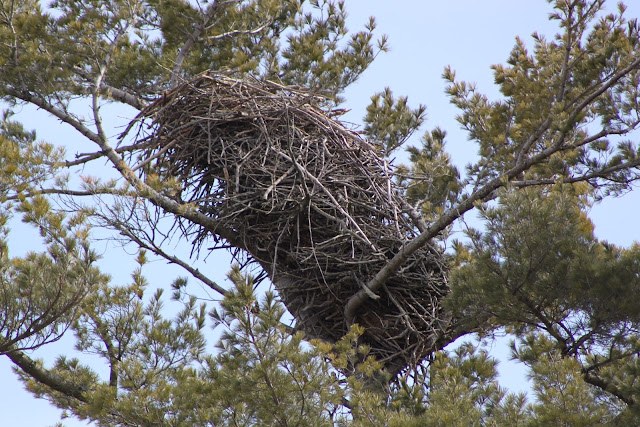 A closer view by zooming in, as viewed from the pasture. 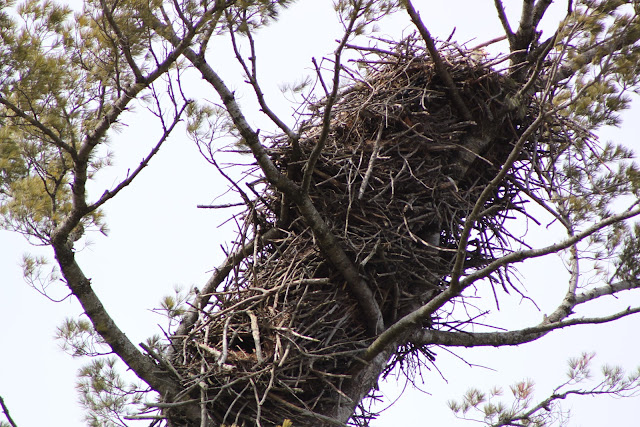 This shot was taken in the field on the other side of the lane. 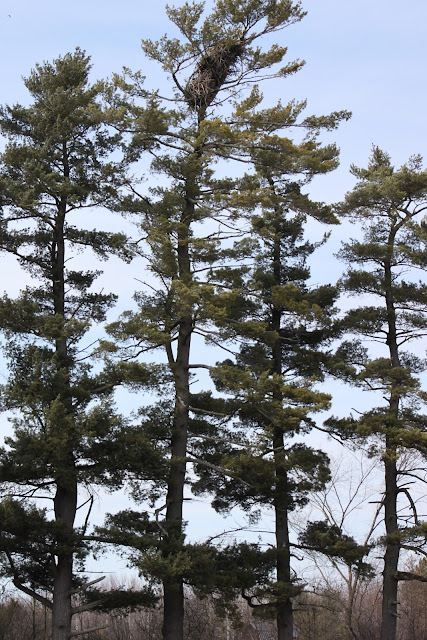 I wanted to show how tall the trees are and I had to go as far as the fence and I still  I could not get the whole trees from top to bottom with my telescopic lens. I'm learning.... 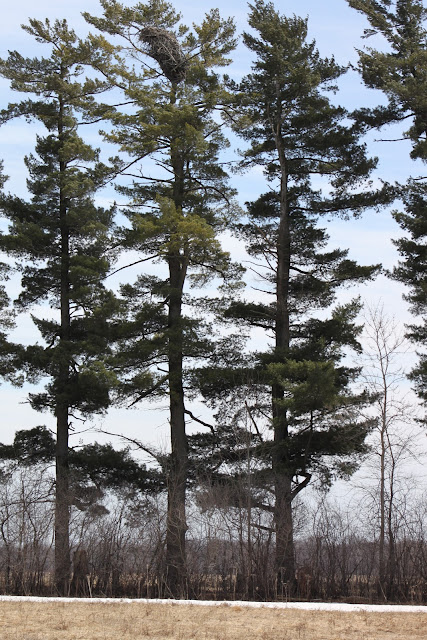 So I walked pretty far to almost the end of the field on the other side of the lane to get far enough away from the trees to show the whole length of the trees. I should have taken my regular stabilizer lens with me as well and it would have saved me a lot of walking. Oh well, it was a nice day. You can see  a trace of snow along the shade of the trees. I'm still learning how to use my telescopic lens. I have so much to learn. 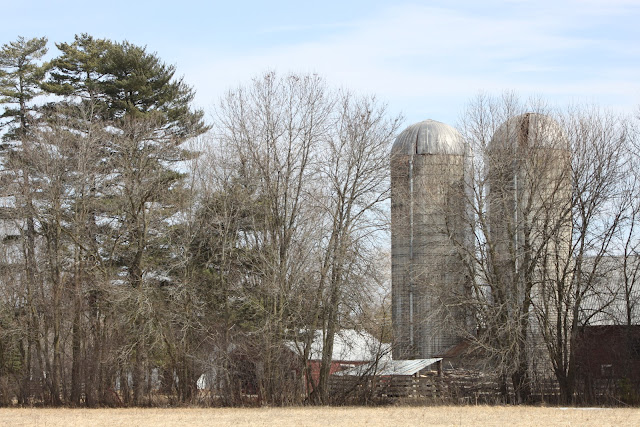 Just to give you a bit of perspective, the silos are 60 feet high and the pine trees near the silos are taller than the silos. The grass isn't green yet and the trees are still bare but spring is in the air. 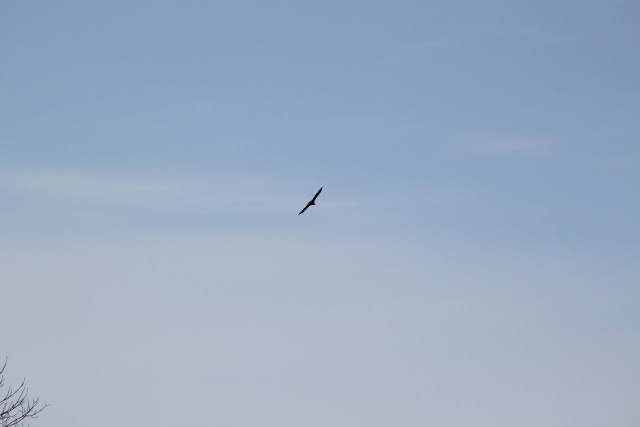 Unfortunately, only one of the eagles was in sight and kept circling high in the air and this wasn't a great shot. I'll try again to get a better shot at some other time when one of them is closer. It's difficult to see them in the lens when they fly so fast. 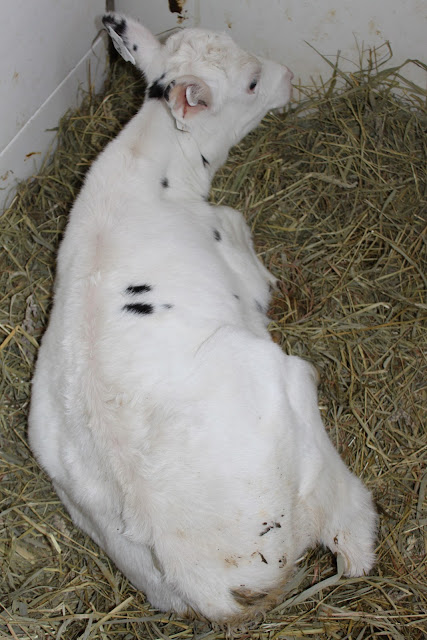 While I was near the farm with my camera, I stopped in to take a few shots of the new calves. This one
was camera shy and didn't even gave me her best side. She had a bit of scour but is on the mend. 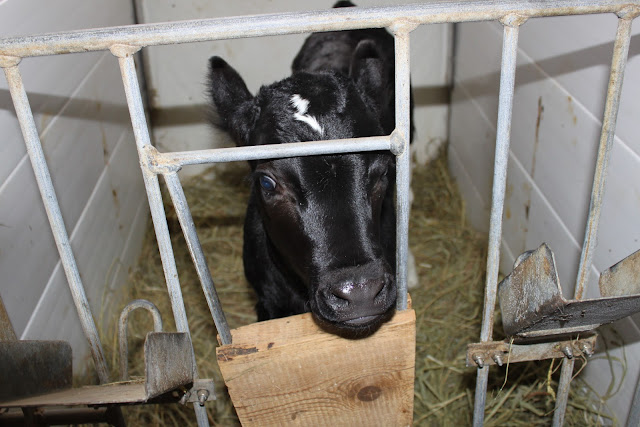 This  little bull was getting excited to have his picture taken. 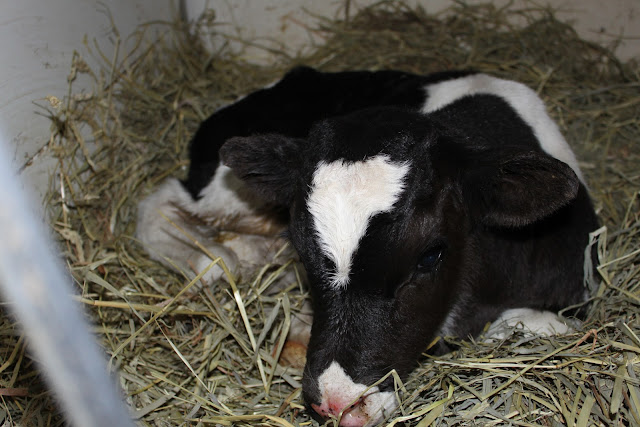 This newly born calf was  born in the dry cow area and was due on April 14. He got a bit dirty and the mother was put in a pen by herself because one of her quarter got mastitis. We didn't want the little bull to suckle on the bad quarter. He was still a bit wobbly. 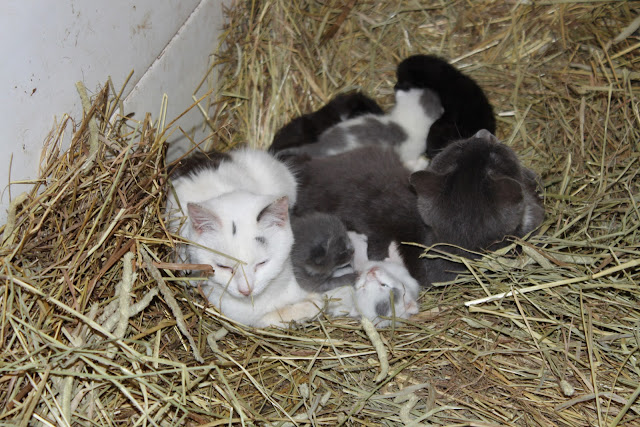 Here is a new litter of 5 kittens. They were born in a calf pen  right in the open before we even got the chance to clean that pen  after the older calf was moved to the larger pen. Here two other cats are caring for the babies while the  mother is taking a break from nursing. Their eyes are starting to open.

I hope that you had a nice weekend.
Thanks for stopping by. I so appreciate the interaction of your comments, even if it's only a one word comment.  It means that you came by.   :-)
JB
Posted by Julia at 8:19 PM 23 comments