IT'S AUGUST AND IT'S FULL STEAM AHEAD

I know, August is almost gone already and I only turned the calendar page a few days ago it seems. The weeds and harvest have kept me busy. Everything is ripening fast and in some places, the weeds are still ahead of me but little by little, I'm gaining momentum.

George is busy with the haying and there is an abundance of hay this year. He's been filling his hay barns and selling large and small truckloads of hay from the field. He goes out early in the morning and comes back just before it gets dark. Too much work for an old fella. He's been dodging the frequent rains and lost two fields of mowed hay all ready because of the rain. Thankfully, they were smaller fields. 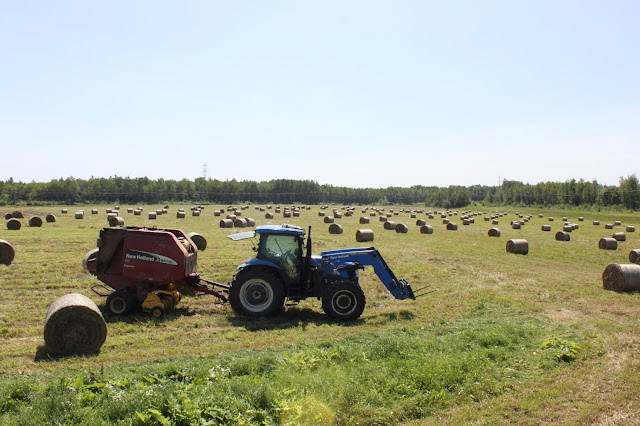 This is only a straight-ahead view of one of the baled hayfields. I took the camera and made a 360-degree turn and there were bales everywhere until they looked tiny.  It would take many pictures to show all the bales. Each bale weighs approximately 800 lbs. 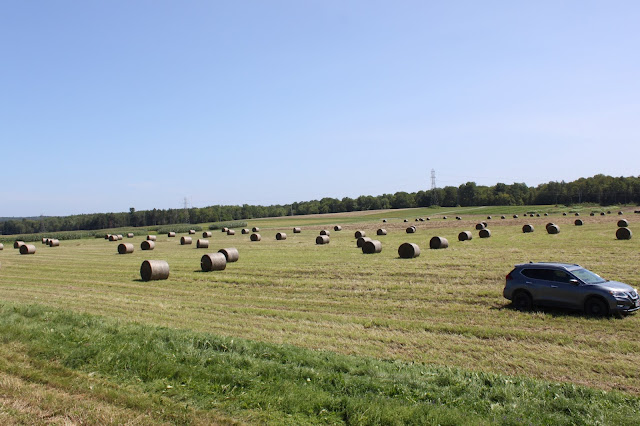 My husband will be cutting hay into September he says. 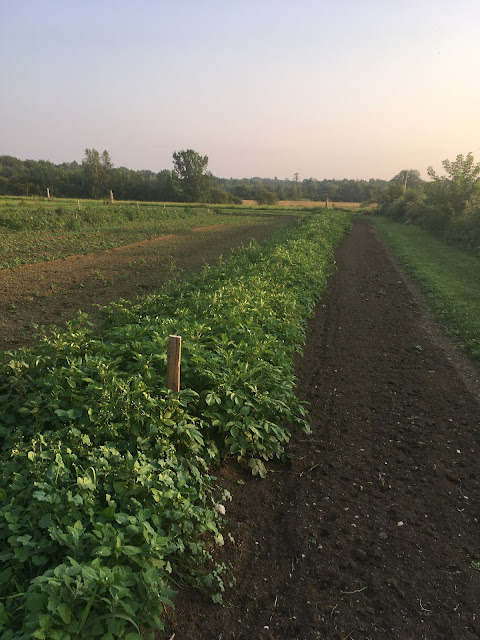 This is my potato garden at the farm. I planted two rows with four different types of potatoes. My husband George dug the rows for me but he dug them too close together and not deep enough.  I dug them deeper before planting my potatoes and he added the compost and I planted the spuds. Because of an ample supply of rain, they grew big this year. 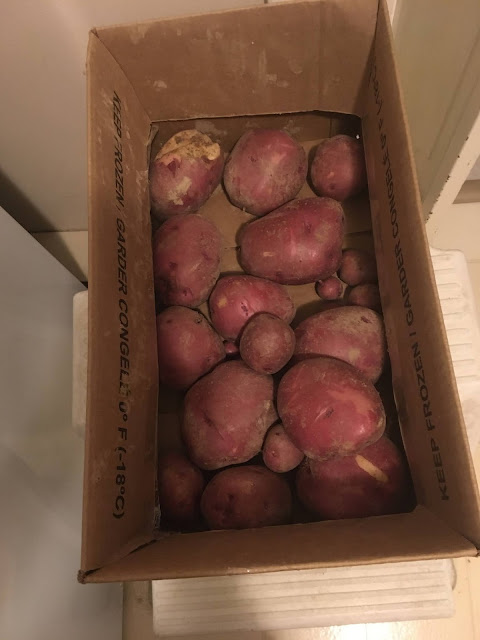 These are called Norland and are good potatoes. 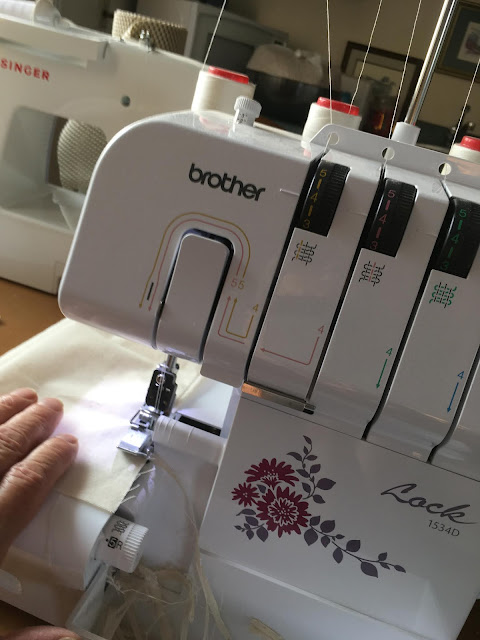 This is the first year that I planted corn and it grew fast and furious. I can almost see it grow before my eyes. I keep checking up on it often and no beast has attacked it yet but the blackbirds and the crows have their eyes on them.  So I purchased 3 yards of sturdy unbleached cotton and with my serger machine, I sewed some little bags to protect the ear of corn. With the Serger it went super fast. In no time I had over 100 bags sewed and on the cobs. As soon as the silk on the cobs turns a light brown, it means that the cob has been fertilized and the bags can be safely put on to prevent the birds from pecking the kernels. 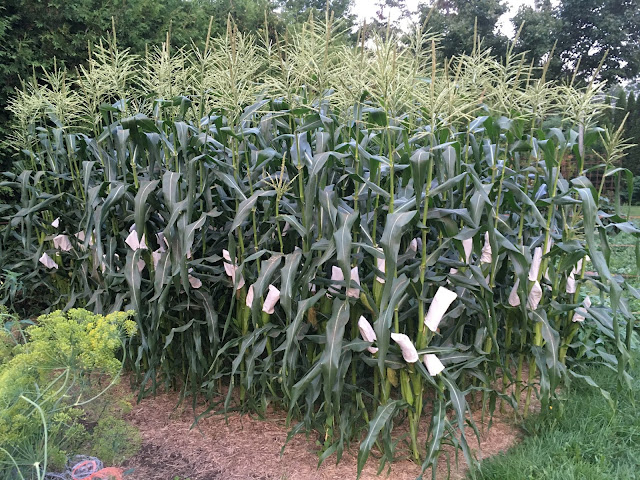 It looks pretty funny if you ask me. I sure hope it works. This will surely not please those feathered thieves. I wouldn't mind sharing some corn with them but they only pick open the top and go to the next and when it rains, the corn rots and is not edible. This is supposed to be super sweet corn and I can't wait to sample it soon. 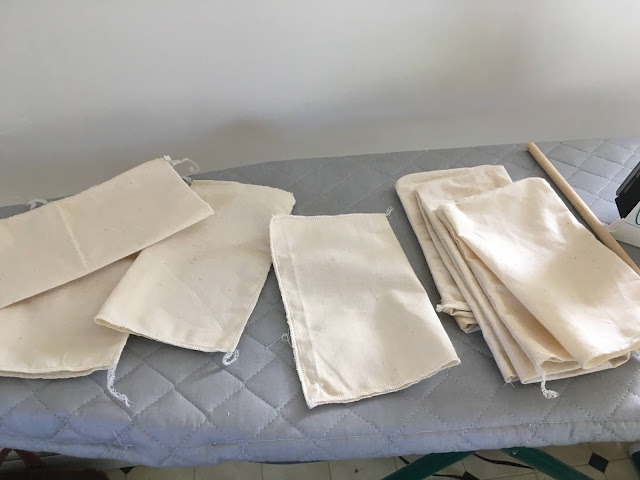 The pattern I made was 9 1/2 inches wide by 7 1/2 inches long. Nothing fancy, I serge the edge.
I thought I was thinking ahead and went to the Co-op and bought  6 ears of fresh corn and tried my first bag on this very long ear of corn. Then I went to the garden to put it on. It was way too long.
My first prototype was 12 inches long but I had to reduce the length because I had not noticed that the long leaves on each side of the cob are halfway up the cob which made it impossible to fit the bag all the way down, silly me.  Of course, by then, I had already cut 75 pieces, thankfully, I had only sewed one before I tried it on the cob. No problem, I just cut off the excess on all 75 pieces and I just serged the two cut-off pieces together and it made just the right length for the bags as you can see on the left top corner of the photo. I'm always experimenting with something it seems. 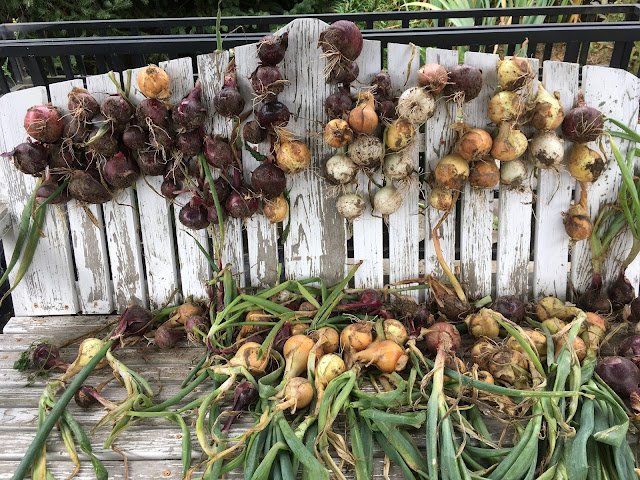 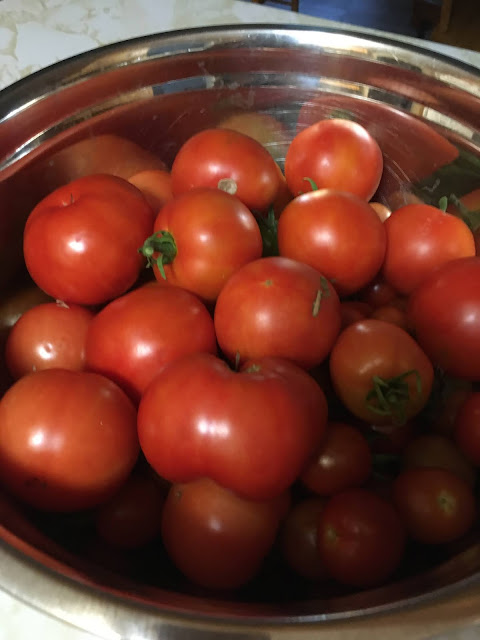 The tomatoes are ripening fast also but I only have a few plants this year as my husband has some planted at the farm. 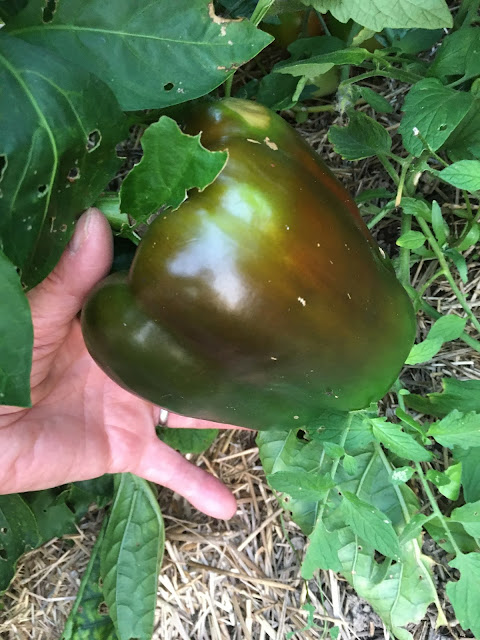 I'm showing off one of my large peppers that survived the deer and gophers attacks. Most of my peppers blossoms have been eaten.
I have to process my beans tomorrow and there's plenty.  There will be more garden stuff later on because I'm a farmer's wife after all.
Stay safe and well. Thanks for visiting and leaving comments.
Julia
Posted by Julia at 8:54 PM 17 comments