OUR BULL IS A BIG BULLY.

One fine day a  few weeks ago, I entered the calf barn as usual and I was greeted angrily by Mr. Bull with an attitude... He came straight to the gate and flared his nostrils and shook his head back and forth and let me know I wasn't welcome and he didn't like me one bit.

I said "Oh yeah,  you're in my part of the barn Big Boy" I grabbed my hay fork and approached him and he backed up. In the past when he was mean to me, I hit him oh the top of the head with the back of the fork tines and he backs up. He knows enough to avoid being hit now.  He still wouldn't go and was still in his menacing mode. I certainly wouldn't turn my back to him.

The gate separating him and I near the sink, has been damaged and the cement that hold the gate secured is cracked. Someone ran into it with the skidsteer a while back. If he knew this he could probably knock it down. I certainly won't point that out to him.

Since I couldn't reach him with the fork, I grabbed the cold water hose and let him have a blast in his face and held the pressure for as long as I could reach him. He  bucked out of there on full gallop and went back to the other end of the cow barn.

He  has avoided my end of the barn since which is very unusual as he would come down every day. He doesn't like me and the feeling is mutual. Vaughan thought he could smell one of my older heifer calf that was in heat. He's not allowed near my little girls anyway  and that's that.
*********************************************************
With the winter coming on, things has been busy around the farm. Windows have been
covered and and the huge door at the top of the old barn was repaired and bolted shut. That was a big job. It was brought down from it's cables by the last hurricane and just dangled in the wind. It will make a big difference with keeping the old barn warmer this winter during the colder months...

The manure lagoon was emptied and spread on the field but since we use sand as bedding it ends up accumulating  at the bottom of the lagoon over the years.  My husband has avoided removing the excess accumulated sand as it's a huge job and because it's very dangerous and he wasn't quite sure how to go about it...

Manure gases can be so concentrated that they can suffocate you instantly.  There are Hydrogen sulfide,  carbon monoxide, ammonia and methane. Hydrogen sulfide and carbon monoxide are both heavier than air and settles at the bottom of the lagoon. Making it deadly even at low emission. There's no oxygen in the bottom to keep anyone alive down there. Kind like walking on the moon without oxygen maybe. Having a manure lagoon means that we no longer smell the strong odour of manure when the wind blows in certain direction. I'm sure the neighbours like that a lot better.

A lot of preparation and study about safety precaution was done by George prior to doing this job. All the safety people were contacted including the fire department. The workers were briefed and the air was blown into the pit to remove the gases. George wore a special gas detector like the firemen wear.  The  skid-steer was lowered in the lagoon with the excavator and George gingerly descended into the lagoon on a ladder. He got into the skid-steer and moved the sand around and the excavator scooped big buckets in the waiting truck. A the bottom there was manure and sand all mixed up.

I fed the 5 workers a hot beef stew with dumplings and blueberry pie. I was busy at home cooking and baking so didn't took pictures at the beginning of the job, but managed to get these pictures after lunch. 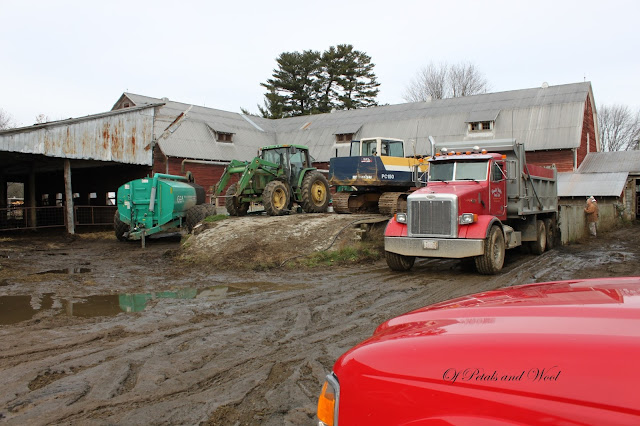 This is the back of the old barn where the liquid manure lagoon is. It doesn't look big from this view but it measures 90 feet by 60 feet and is 13 feet deep. Cows poops a lot. 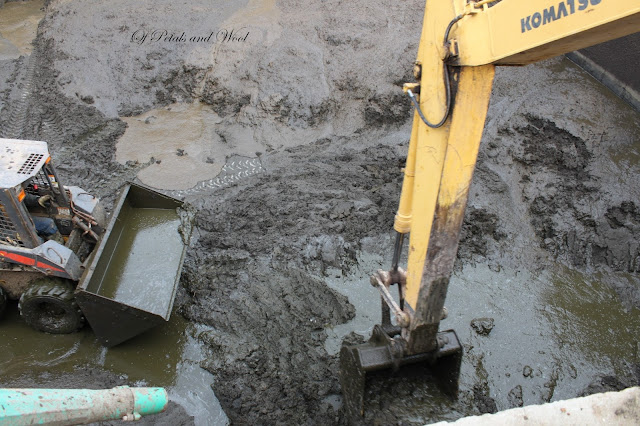 George is driving the skid-steer and scooping up some of the slushy sand and liquid for the big scoop. 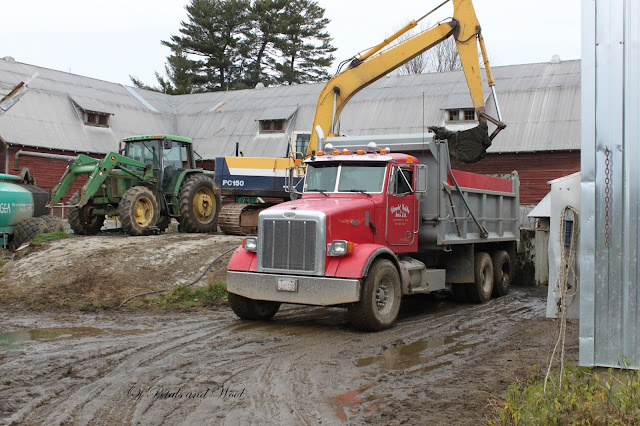 Truck load after truck load the manure and sand mixture is carried away. It didn't smell as most is composted. It had been raining the night before so everything is muddy. 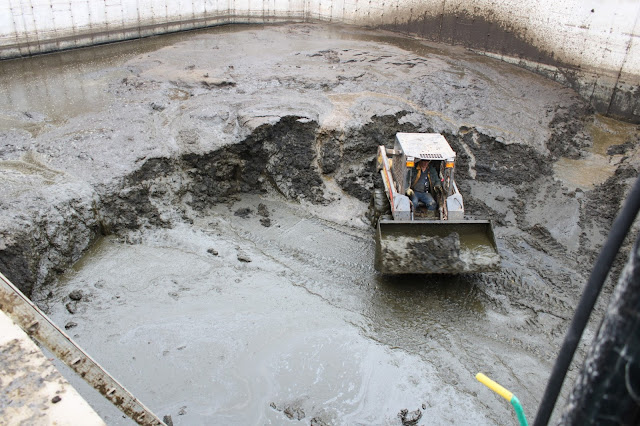 It show about 3 feet of sand and muck at the bottom of the lagoon,  This was carried by truck and wagon to a spot in the field to be dealt with at a later date, 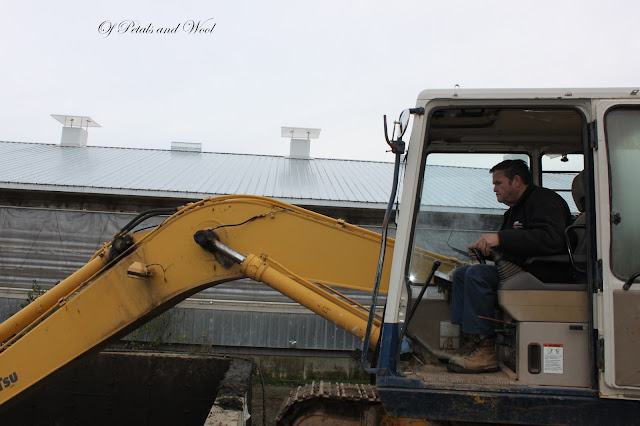 The operator of the big excavator is doing his job. 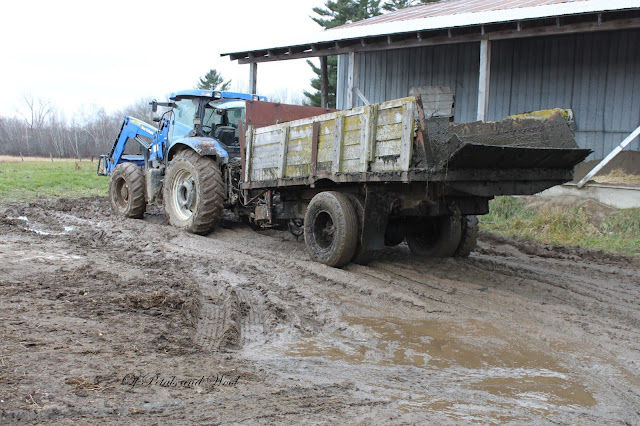 George salvaged the dumping mechanism of an old farm truck and made use of an old abandoned wooden wagon to help carry off the soupy muck. 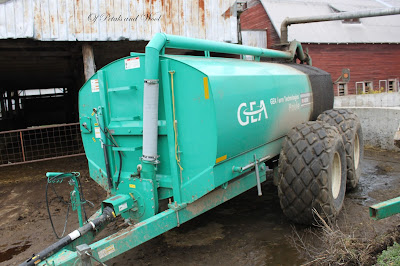 Sorry if this post isn't your cup of tea but farmers will go to great length to keep dairy products on your table without smelling the neighbourhood.
Thanks for your visit and please be kind and leave a comment just to let me know you came for a visit. A one line will do.
Stay safe and happy.
JB