I LOVE GARDENING BUT IT CAN BE A CHORE

Again, since it has been so long between posts, I have difficulty knowing where to start so I'll show you what I've been up to from the photos on my phone. 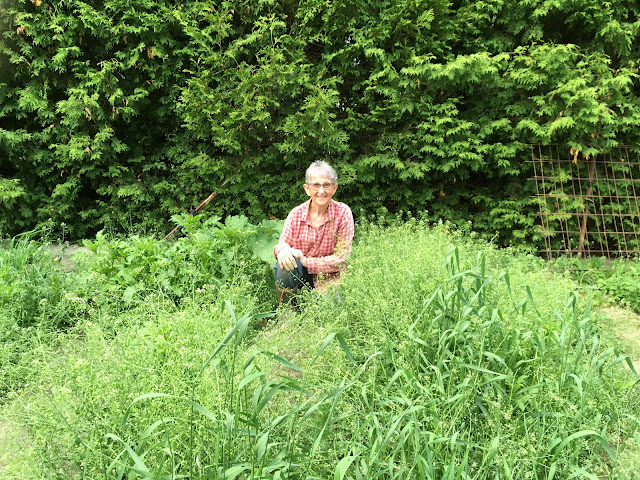 Yes, that's little old me in a weedy neglected vegetable garden.  It was all going to seed and had to be rescued. One year of seeding makes 7 years of weeding so the saying goes... My son took this picture of me before my husband weeded this patch.  Now this garden is all weeded and planted. 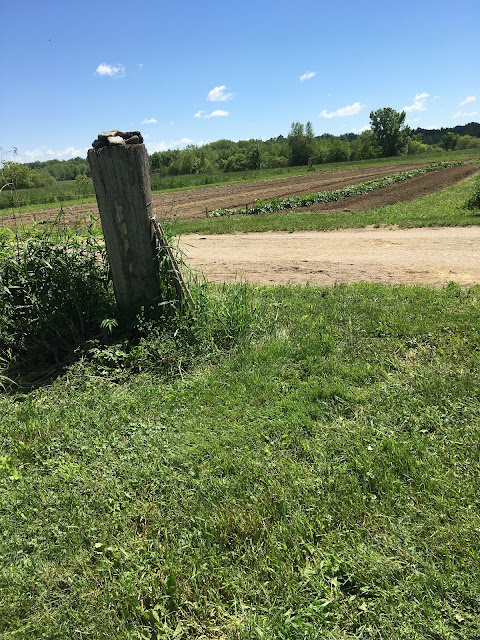 These are my two long rows of potatoes, approximately 180 feet long each row. Not a very good picture.  I did an experiment this year by planting some potatoes in 4-inch pots before it was time to plant outside. They all did well and I got my son Vaughan to plant them in 8-inch deep trenches. They have been hoed twice and are much taller than those I planted directly in the soil on the same date. 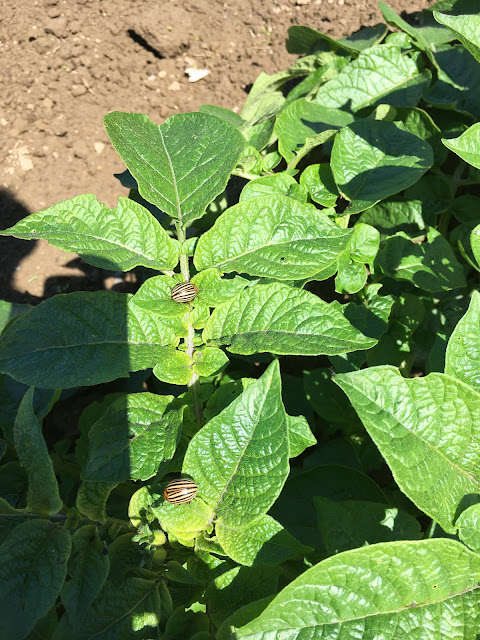 As you can see they are being attacked by Colorado potato beetles who lay their eggs on the undersides of the leaves and as they grow they can decimate a plant in no time if left unattended they will soon get out of control. 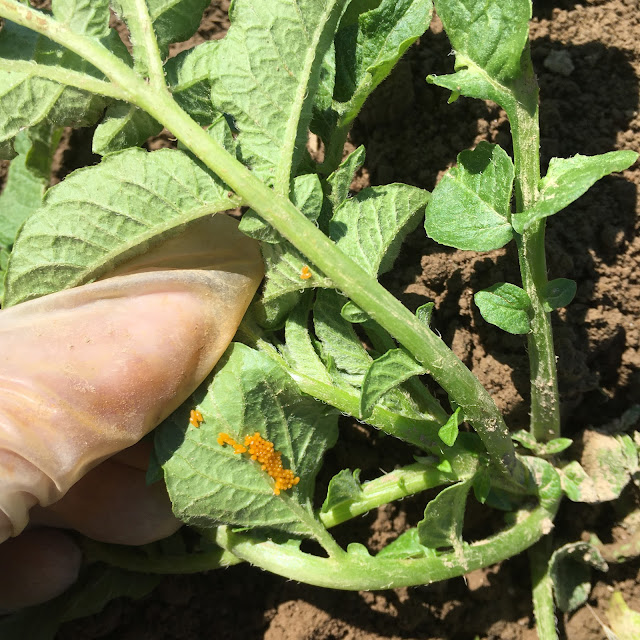 This is what the eggs look like. They are easy to crush with your thumb. I prefer to use vinyl gloves. Checking for eggs and beetles is a time-consuming job since I don't like to use poison unless it was out of control. 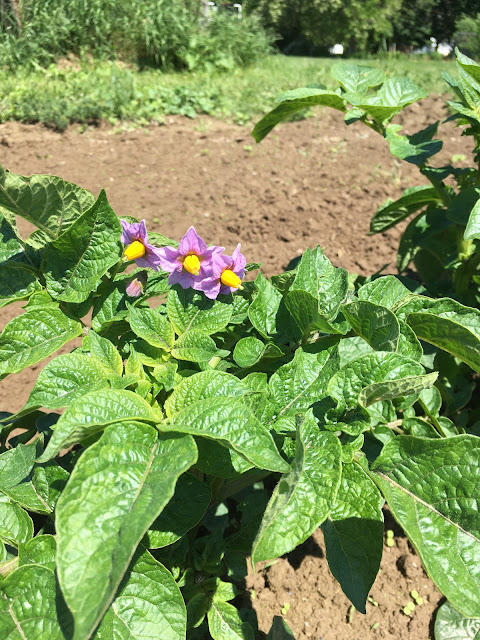 My red Norland potatoes are blooming. 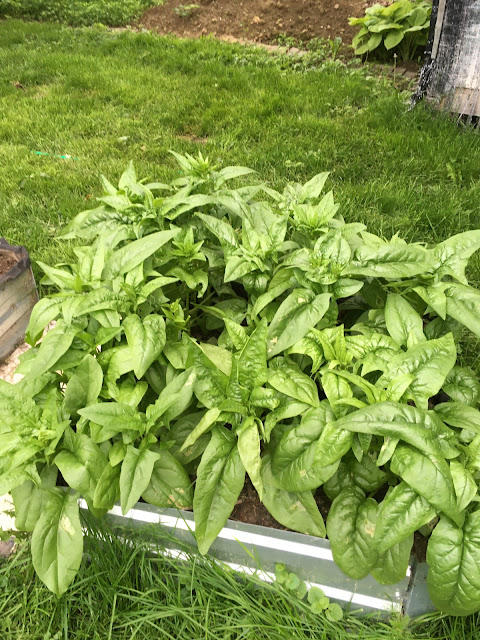 I harvested my spinach from a small raised bed in the backyard. I got 2 pounds  4 oz. 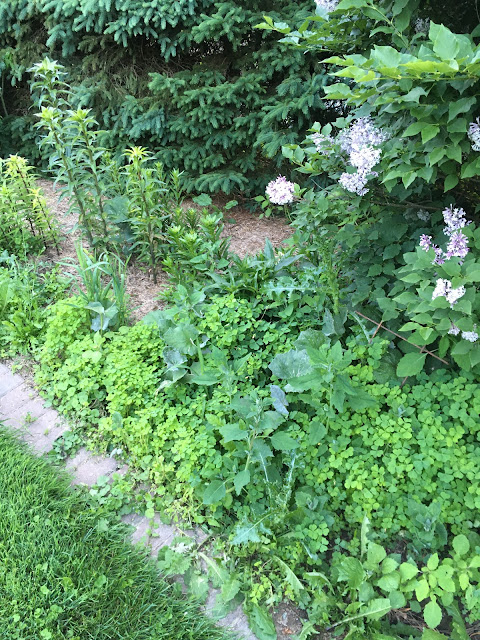 A before picture of weeds in my flowerbed where I had annuals growing last year.  It's been raining so often that in no time the bed is overrun by weeds. I've always mixed annuals in my perianal beds but I find it produces lots of weeds. 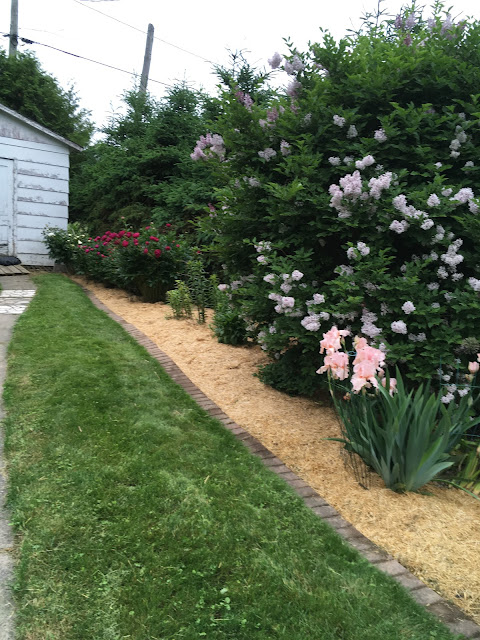 I had to remove many pails of soil next to the brick border so the straw would stay in place This is what it looks like after weeding and mulching with premium straw. 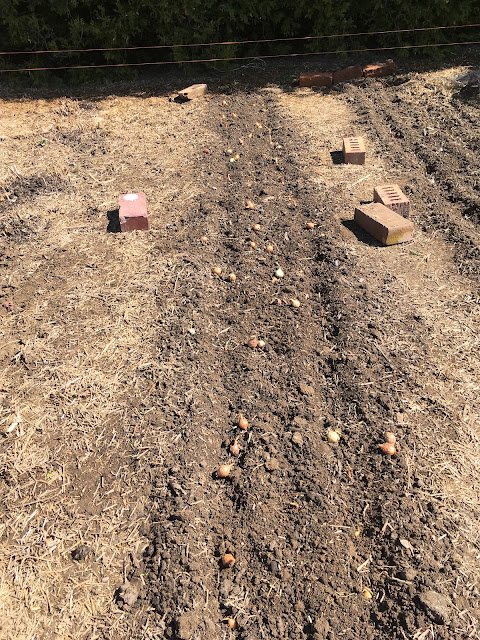 I had such a hard time this spring with my onions as they were out of the soil and I had to replant them every morning.  I covered them with a black fine mesh fabric weighed down with bricks as I thought the birds were pulling them out but the next day they were pulled out of the ground and the mesh was undisturbed.  I  looked it up online only to find that night crawler earthworms were pushing them out of the soil. After years of mystery, I finally know who the culprits are. 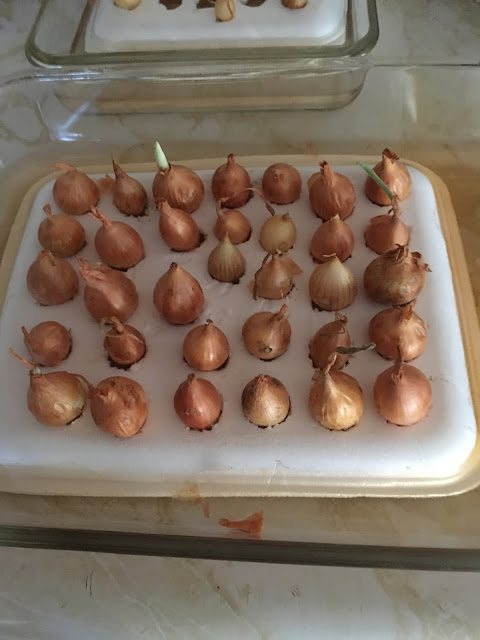 So I decided to try an experiment with rooting onion sets before planting them.
I use styrofoam containers and use a small kitchen tool with serrated edges that I use to cut the core of tomatoes to poke little circles in the styrofoam and place them in a glass pan and add water until it touches the under  top of the plate and in two days, the onions are rooted enough to plant. A few take longer. I forgot to mention that I cut the tops of the onion as in the picture. 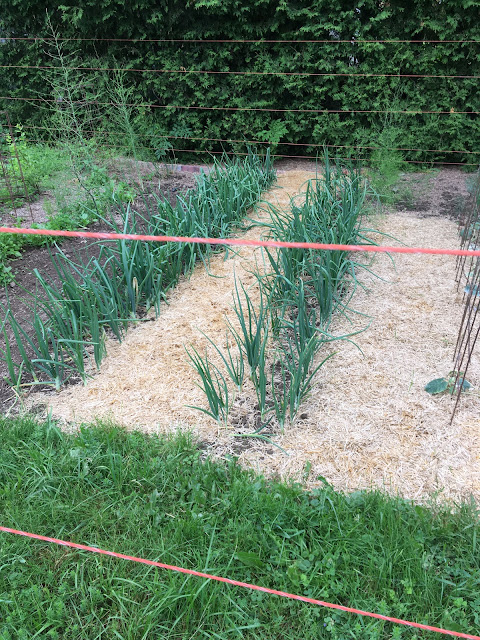 These onions were the same ones that the earthworms were pushing out of the ground. They finally rooted but it was very frustrating. 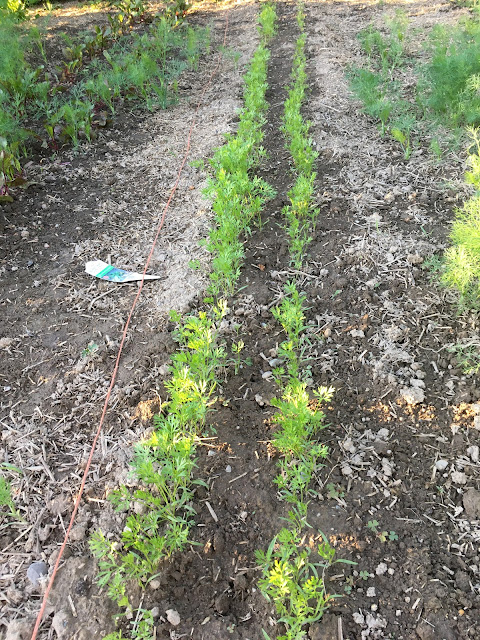 Another experiment I tried this year to speed up the sprouting of carrots is to fill a Chinet paper plate with potting soil and sprinkle the carrot seeds on top I placed the plate in a large used Ziplock and I put them in the freezer for 24 hours and then I put them in bright light but out of the sun as it would get too hot.  I check them every day and in no time they start to sprout.  When most of them are sprouted, I gently pick up a handful and sprinkle them on fluffy soil and then sprinkle some soil on top and that's it. I water them well and make sure they don't dry up. It can take from 14  to 21 days to sprout when direct-seeded but with this method, I think it took about 5 days to sprout.  The ones on the left were sprouted in the Ziplock bag and the ones on the right were direct-seeded. I took the picture in the evening sun so they look yellow. 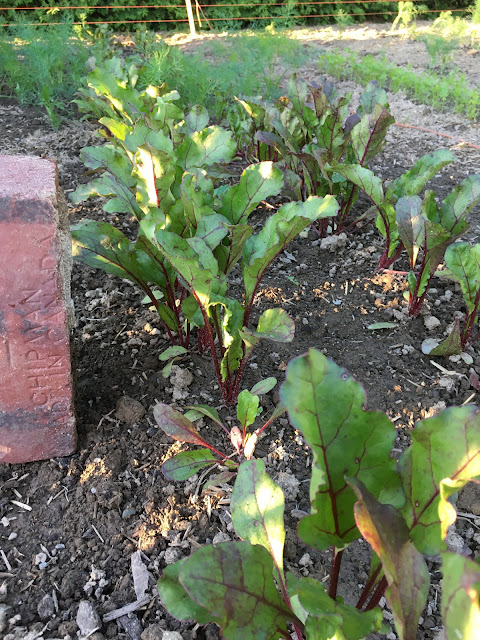 My beets are doing well. This picture was taken earlier in the week. The 8-inch brick is to give a bit of perspective. 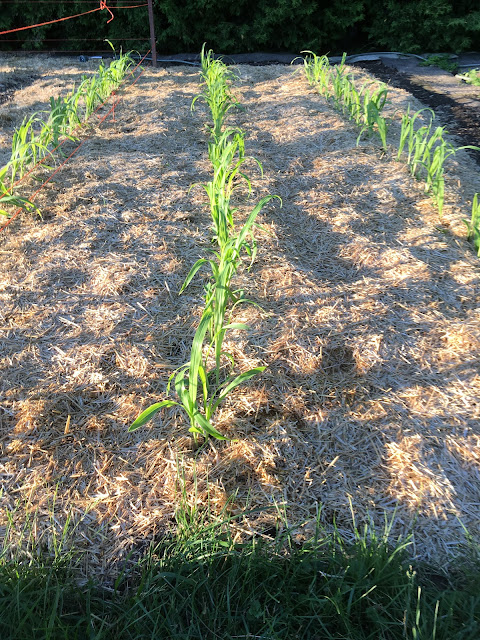 I planted two trays of sweet corn that were given to us by Scott's Nursery.  I have some that I direct planted, that are also growing, but not shown here. 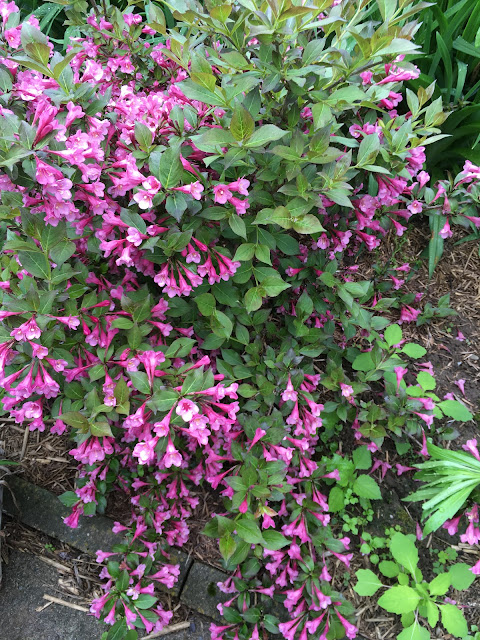 Now, time to share some flowers. This is a weigela bush. 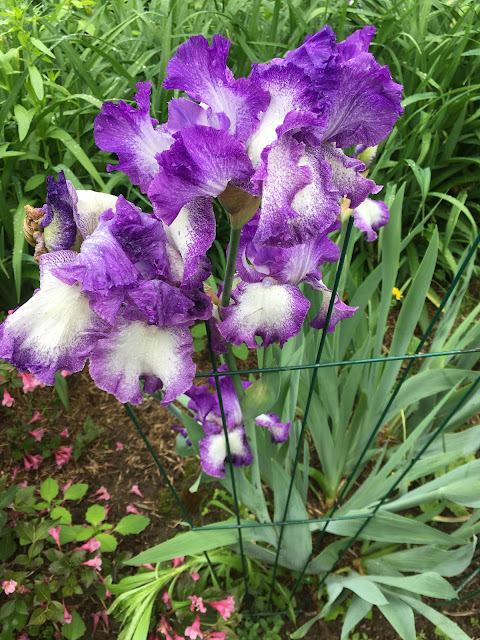 If I remember well, this iris is called Rare Edition. 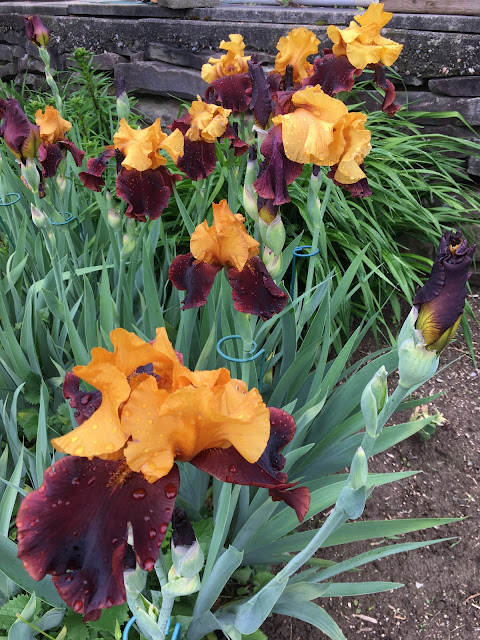 This one is called Supreme Sultan 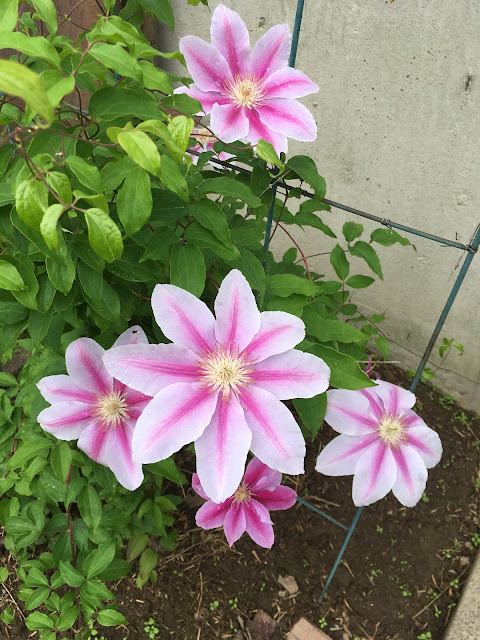 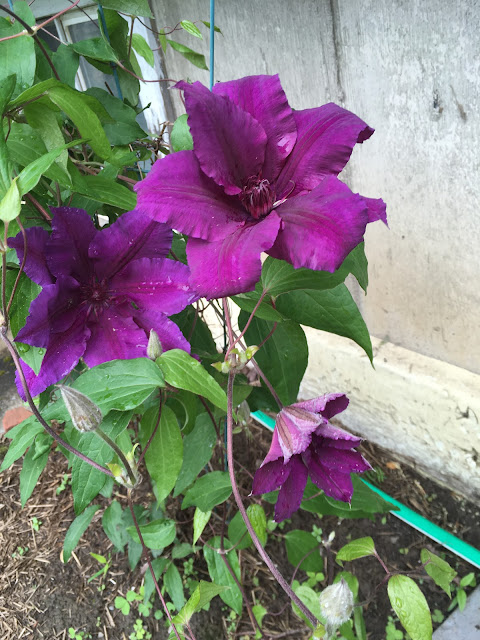 This one is called Royal Velvet and was having difficulty but has made a comeback. 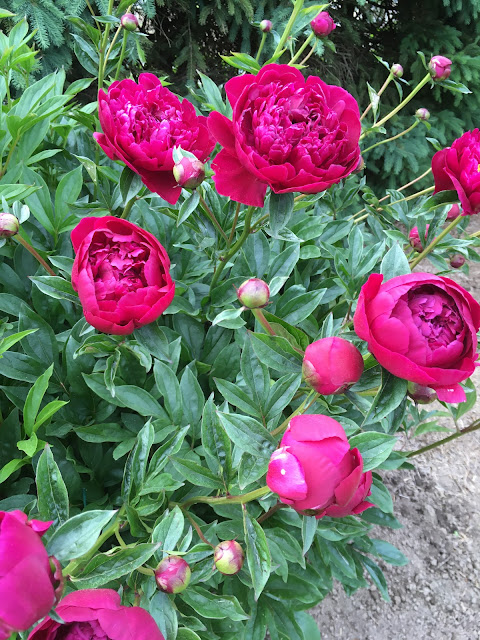 One of my many Peonies is starting to bloom 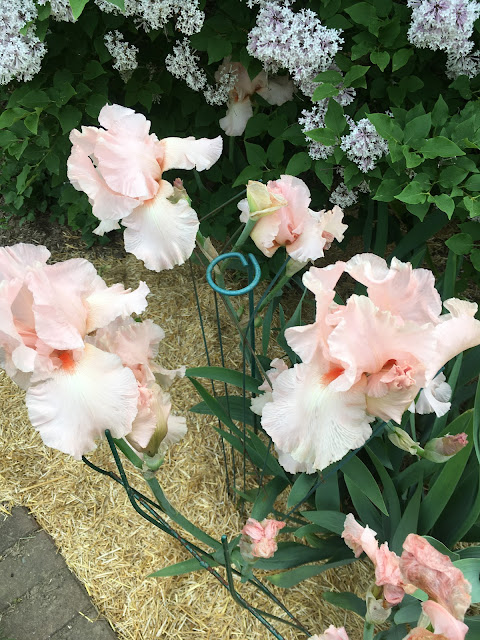 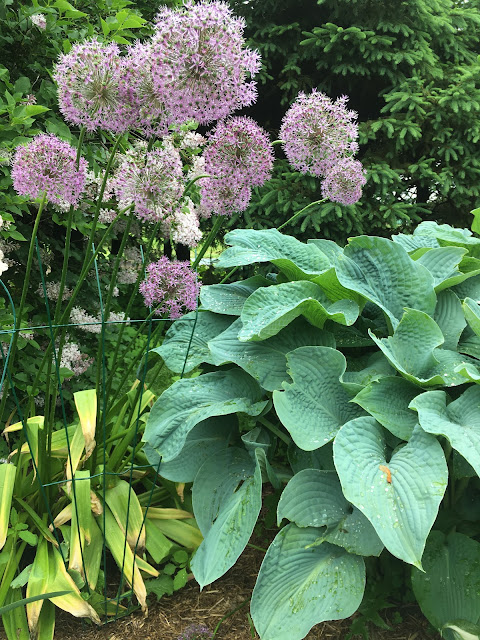 My Alliums are having to compete with the Lady Kim lilac that has grown so large and they are leaning to get some sun. The tips got frostbit early this spring. 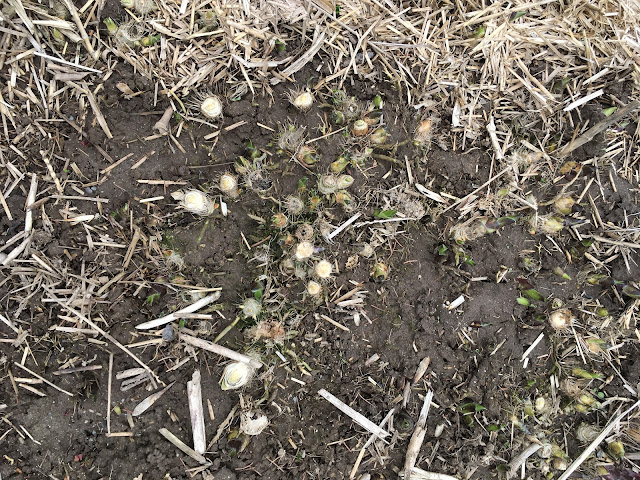 Remember the deers ate my Hostas right down to the ground this spring and I worried for nothing. 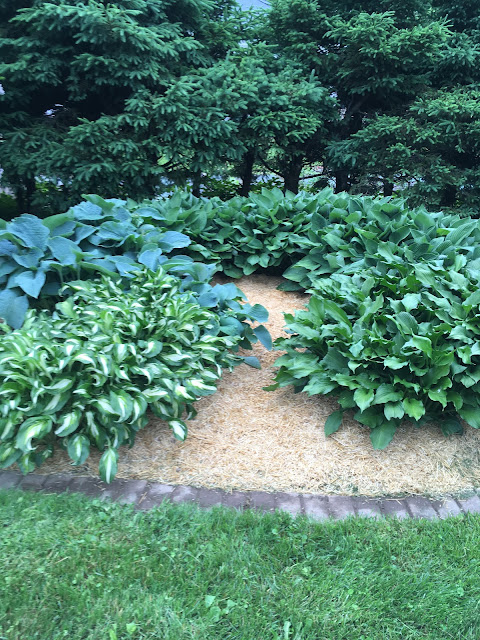 Look at them now, you can't even tell that there was damage.  Did you know that the young shoots of Hosta are edible for humans and are reportedly delicious when cooked as a vegetable?
I think I better stop here as my blog is getting to be photo heavy. I hope you enjoyed my gardening experiments. I have still so much weeding to do, probably until harvest time. lol.
Thanks for coming for a visit, I really enjoy seeing that you visited and your comments are much appreciated.
Posted by Julia at 9:16 PM 34 comments