I've been after my husband to clean the chimney it seems for ages because I'm afraid of chimney fires. We've been  burning a lot of wood as it's been cold and some of the wood he's been burning is a bit wet and the temperature has been fluctuating with warm and freezing and it all adds moisture in the chimney and accumulate creosote which is very flammable.

Last year I hired a couple of chimney sweeps and all they did was push a brush up the chimney from the little clean-out door that is accessible from inside the garage and they charged me $75.00 plus tax and I was wondering about the top part of the chimney. I'm sure that they didn't even reached all the way to the top.

This week I went to our local hardware store, good ole Canadian Tire and purchased a folding ladder that I've been wanting to buy for a long time . It was on special at half price. This ladder reaches 17 feet high.
So today, my hubby  decided that since it wasn't too cold he would not light a fire  and he would clean the chimney with my help.

He attached  a weight on a wire chimney brush and  folded the long rope in two and attached it to the brush and lowered it down the chimney while I pulled on the other end to which also was attached a weight.

I was in the garage pulling on the cord while the soot was flying everywhere and he was pulling from the top to loosen the creosote accumulation and there was a lot. A good thing I was wearing a tuque on my head to keep my hair clean but my face got dirty. 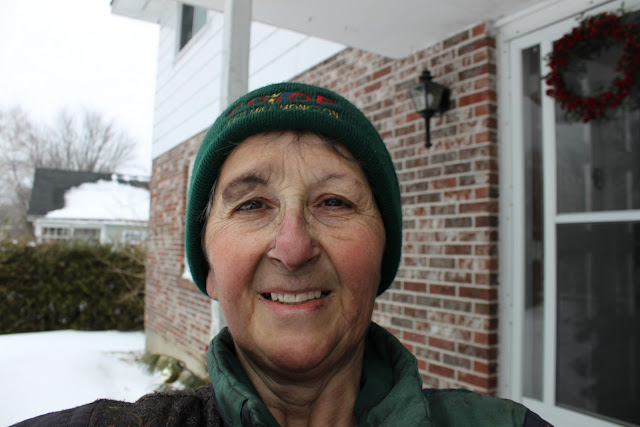 Here is Grandma Black Soot.
This is a self portrait holding my camera at the end of my arm. The soot accentuated my every wrinkles but look at that satisfied smile.  My throat was black with soot, it's not all shadow.  It really makes me look my age.

So my ladder has more than half paid for itself already. A great investment and now I can sleep feeling more secure especially on windy days. And I'll make sure that we don't wait so long between chimney clean up.

Keep warm and safe and thanks for leaving comments.  JB
Posted by Julia at 10:57 PM 21 comments