THE BABY BLANKET IS FINISHED, AT LAST

Just a short post today... I finished the white baby blanket and finally have something to show for after such a long time of hooking and ripping.  I came close to throwing in the towel several times when I got frustrated but decided to have another try when I was more rested.

It's a good thing that I used white as I had to get two more skeins of yarn. The other baby blankets I crocheted before all used only three skeins of yarn. I had a bit of hesitation to do the border and had a few mistakes but I just kept going as it wasn't affecting the border too much...

I learned a lot from my mistakes. The acrylic baby yarn I was using seems to be stretchy and probably not a good choice for a beginner like me as it made it harder to see the stitches clearly as the yarn would split often. A worsted yarn would have probably been easier but not as soft.  Anyway, it's done. 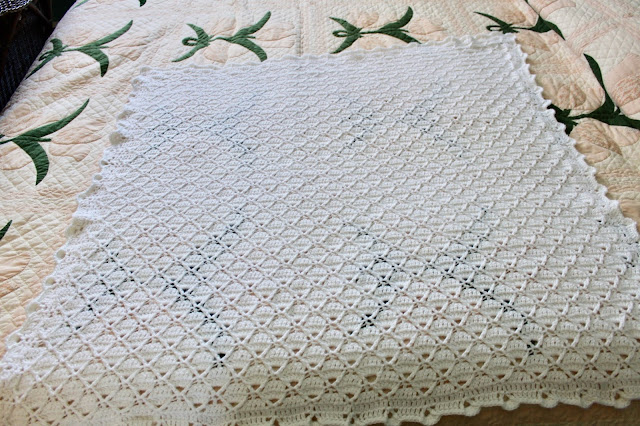 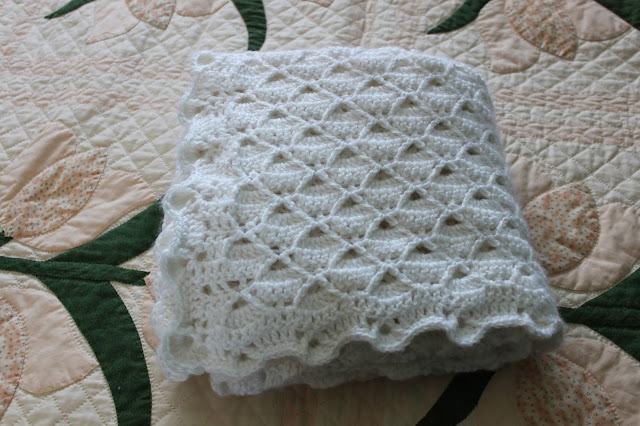 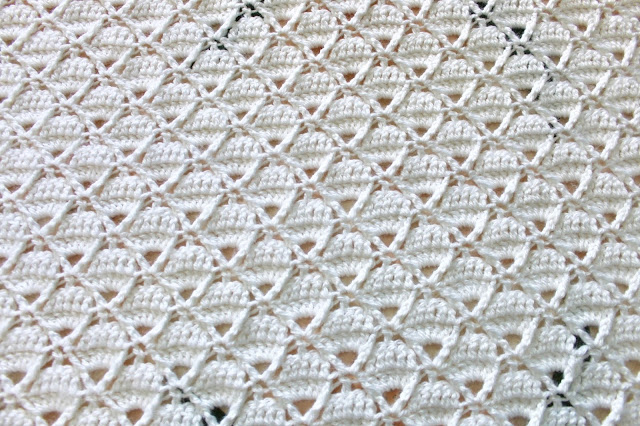 We're having some balmy weather and it was windy today so the snow is melting fast and there's a lot of puddles on the road.  Only 8 days to spring 2021.

Thanks for stopping by for a visit. I hope everyone is in good spirits and doing well.

Yes, today is our 55th Wedding Anniversary. Time seems to go by fast when we keep busy. It doesn't seem like 55 years since we got married. It was a memorable event although, not a grandiose one...  The day before the wedding I remember the huge snowstorm on February 25, 1966. My mom, my sister in law and myself had just gotten our hair done at the hair salon, George had picked the liquor, the wedding cake, and the flowers and we were on our way to bring the liquor and the wedding cake to the Church Hall in the next town for the wedding reception the next day, but we couldn't even enter the driveway as it was all snowed in so we headed home. 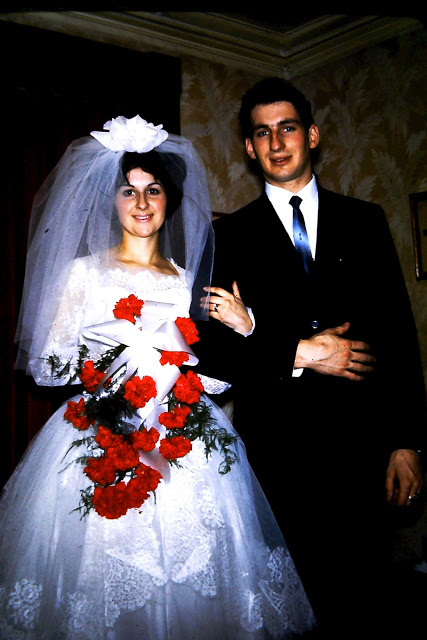 The wind increased and there were sudden whiteouts where we couldn't see the road ahead. Even if we would have accurate weather forecasts in those days I doubt we would have paid much attention to it anyway. lol...  A good thing the traffic wasn't as heavy in those days as it is now.

George was driving the brand new Red Dodge Charger.   I sat in the front holding the wedding cake on my lap, Mom was in the back with my sister-in-law who was holding the wedding bouquet when all of a sudden, we were in a whiteout and the car came to an abrupt stop.  The car rammed into an abandoned white car on the road. Someone has abandoned his white car smack right in our lane without any flashing lights or any lights on for that matter and took off on foot. It so happened that this guy had no insurance on his car and had no driver's license.

On impact, my face went into the cake top, some of the flowers were broken but miraculously no one was hurt.

We all got out of the car, with the snow flying, and went to a house nearby to call the police. The grill in the front was damaged but George managed to get the car home safely but by then it was night. The snow had melted on our hair and it didn't look like we just come from the hair salon... My brother in law, fixed the cake, the bouquet was also fixed, we managed to put rollers in our hair, and the next morning, George was up at the wee hours of the morning to plow the lane up to the highway. The train underpass was blocked with snowdrifts but was cleared in time to make it to the church on time.

Because of the storm, the photographer canceled out and George's younger brother took some wedding photos of the event. The photos were developed in slides.

The wedding reception was changed from the church hall to the farmhouse. The homestead is a large three-story house and was built by Senator Glasier with two large rooms divided by large accordion doors like you see in a hotel conference room and was perfect for a large crowd to dance. Someone must have called all the guests to inform them of the change of venue because there was a large crowd of family friends present and everyone had a whopping of a good time. There was lots of food, good dancing music and lots of wedding gifts and lots of booze also. People danced until the wee hours of the morning a great time was had by all.

Throughout all this, I was totally relaxed and not once got frazzled. All I wanted was to get married. The rest didn't even matter to me but I must give credit to all those who made this event possible with such speed. My father-in-law loved to have people in his house and I know that he enjoyed having this party in his home very much.

A few days later, a good friend of my husband lends us his big black car because ours was at the repair shop so we could drive to Florida for our honeymoon. We drove to Montreal for George's best friend's wedding and then we drove to Florida.  In those good old days, we didn't need a passport to go to the US and you could come and go as you pleased. I miss this freedom we once had and took for granted.

This evening George and I celebrated in a very small way. I ordered some takeout fish and chips and ate in our dining room instead of going out.