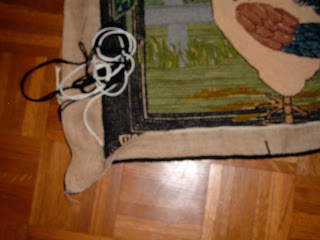 There're no doubt that blogging takes me away from working on my quilt and rug but a girl has to have an array of hobbies and life is made to be enjoyed and so I've decided that 's what I'll do. Blogging actually gives me pleasure. But it's time to give a peek at my slow progress of whipping the edge, I'm actually turning a corner. I took a photo close up of the back corner and it was a bit blurry. I need to get a better camera.
Posted by Julia at 10:30 PM 4 comments

FULL MOON BUT NO WERWOLVES

Did you see that full moon last night? It was magnificent. I heard that more babies are born around the full moon and that's what happened last night. We found two little bulls running around in the field. One was found last evening around 9:30 p.m. He was easy to spot  with the flashlight because he was mostly white with black markings but the other mostly black one wasn't found until this morning. The vet had to be called in to make sure that we had the right cow to match with the last calf as the last calf was found nursing on another cow that wasn't her mother and that cow was upset when we took the calf away from her. Weird... No photos of the calves as I had my hands full.  There is no more vacancy in my calf nursery. If time permits I may take a few photos tomorrow.

Raspy drank a full bottle this morning and about three quarter of his bottle this afternoon, but I'm sure that he'll do better in the morning.

The much needed rain is falling quite hard at the moment and quenching my parched front lawn that has started to turn brown.  Funny thing about my husband, he mean well but sometimes I wonder. I usually am in charge of the gardens and lawn around our house. In August we usually get a stressed lawn that turns brown until we get a good rain. This year I was ahead of the game because I had my mower raised up as high as it would go so the my grass wouldn't get cut too short in hot weather. I was proud of my foresight. I took out my lawnmower and cut the grass longer than usual, very pleased with myself. My husband has purchased one of those big fast lawnmower that can turn on a dime, just like the city uses to cut their vast expanses of grass. They work like a skid steer with  leavers instead of a stirring wheel. He was going to do me a favor and cut the grass while testing his new toy on our lawn.

I saw him going about a hundred miles an hour and thought to myself that, Wow that machine sure makes cutting the lawn child's play. I was busy making my zucchini cakes and was pouring the batter into the pans. In a few minutes he was done with the back and was going on the front lawn with the machine while I stood there with my mouth wide open gasping for air. But I love him just the same... JB
Posted by Julia at 10:01 PM 3 comments