NASTY ARTHUR, HE WENT AND BROKE MY HEART

When I posted pictures of some of my flowers the day before hurricane Arthur hit, I wasn't expecting for him to be so angry. After all the weatherman had said it wasn't going to be as bad as Hurricane Juan was last year. I knew there was going to be high wind and heavy rain.  We were not overly concerned as Juan didn't do much damage around here although it did a lot of damage in Halifax in Nova Scotia.. The only preparation I did was to weed my garden before the the rain hit so it wouldn't spread the seeds everywhere. The boys got all 500 big bales of hay inside the hay building before the rain started. Big mistake to underestimate the weather, especially when a hurricane is coming up the coast.

How did Arthur broke my heart you may ask? He knocked down the big pine tree where a pair of eagles have nested for the last 10 years in our lane by the barn. There was two young eagles in the nest and one of the parent had just brought them their meal. A gaspareau  fish. 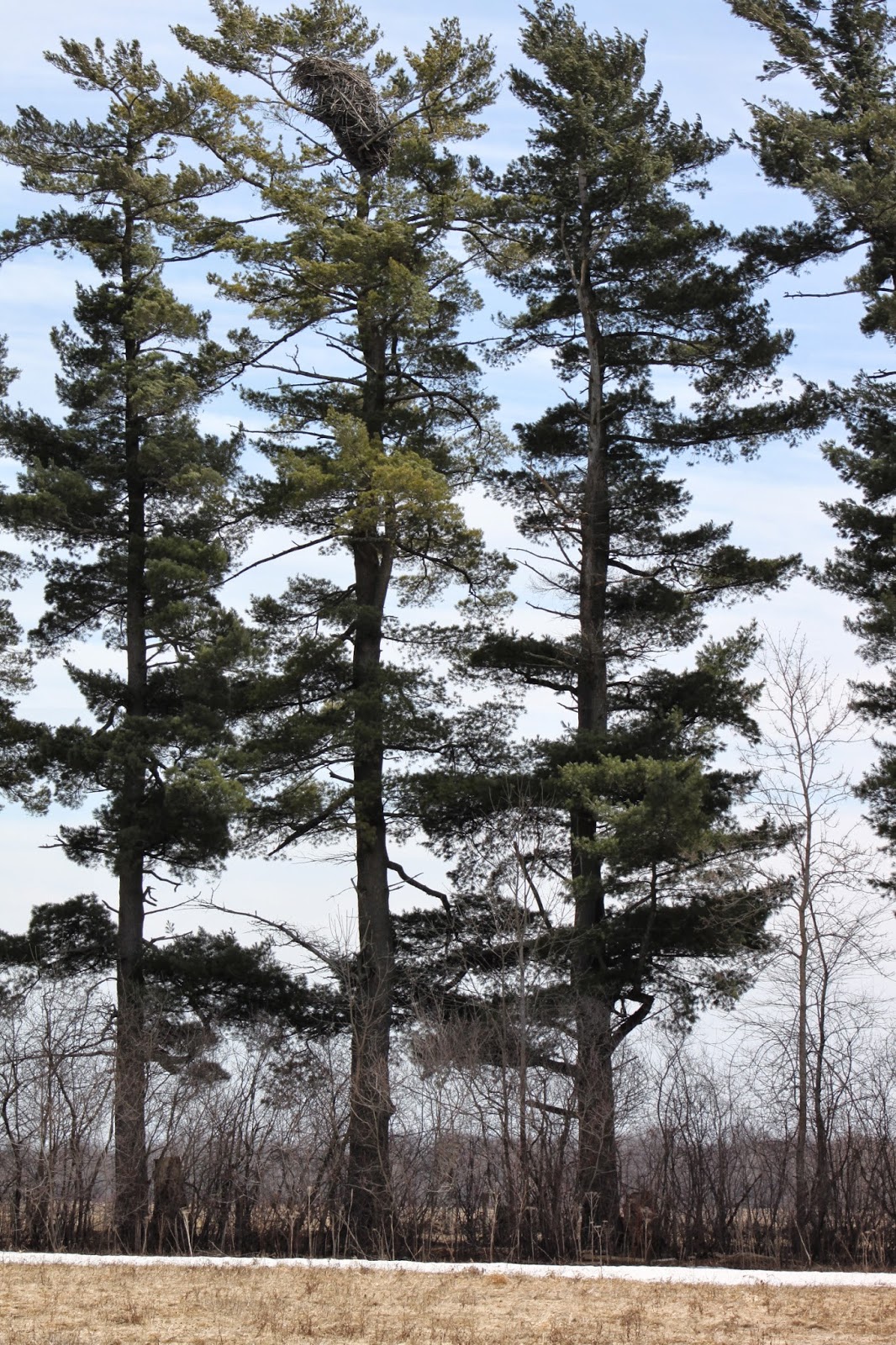 This is a picture I took last year of the pine tree and the eagle nest. It was even bigger this year as they add branches and stuff every year. I think that if you double click you can see the pictures bigger. 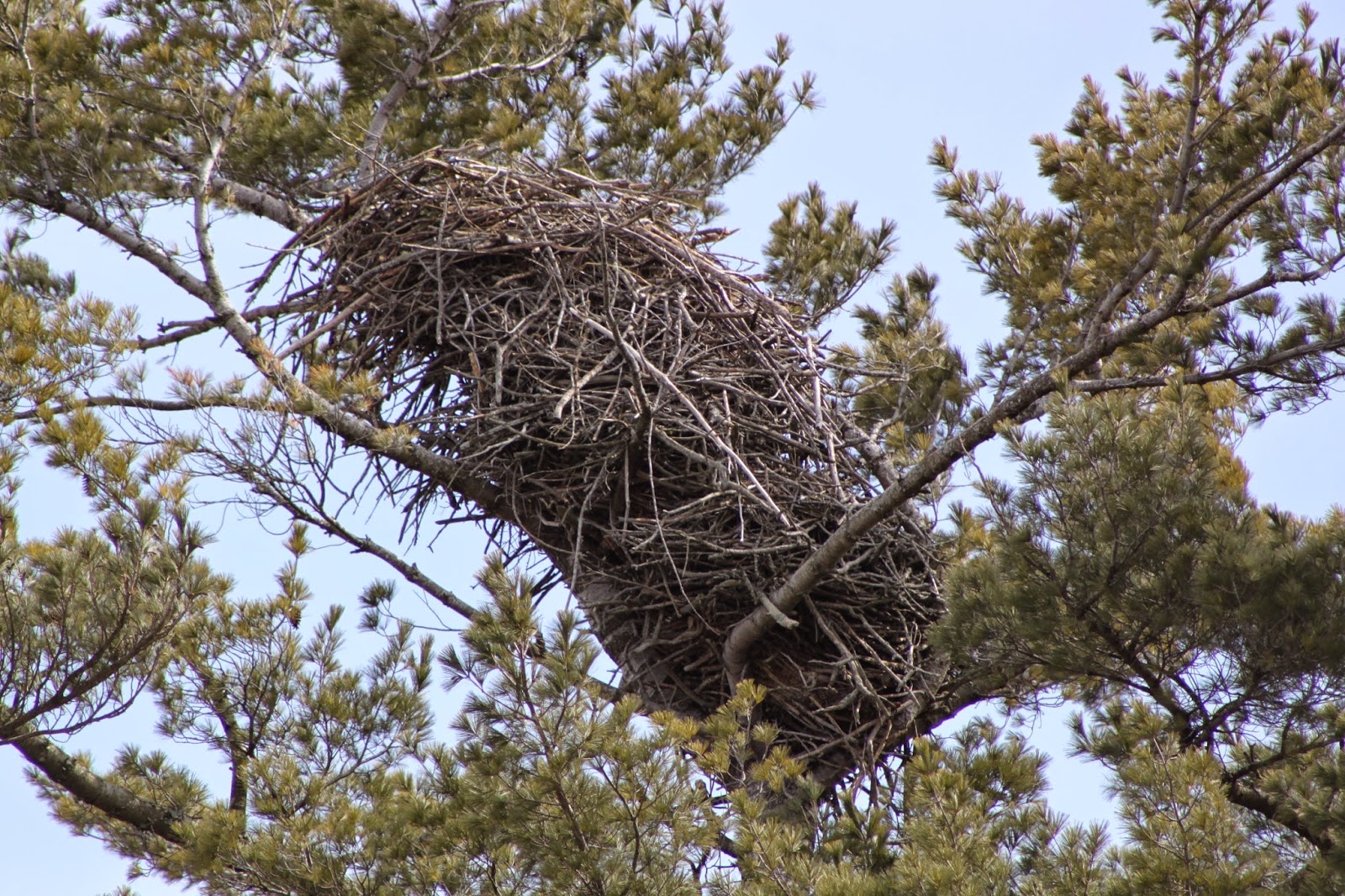 and here is a close up of the nest  also taken last year. 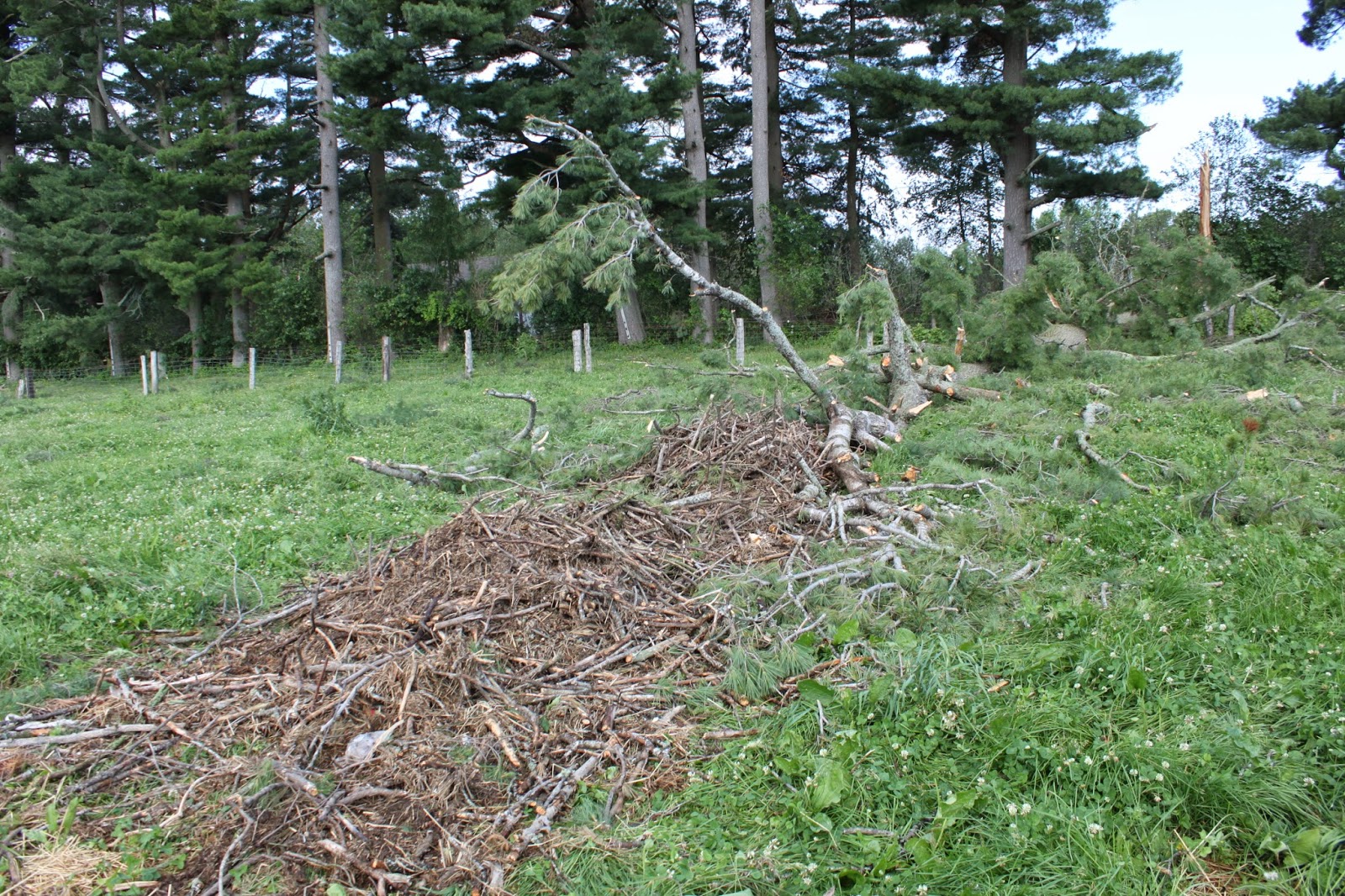 The tree broke in many pieces and also the branches and the nest was sprawled for a long distance. You can't really judge the size of this nest. Being so heavy and wet, it's no wonder it fell dowm. Those branches are pretty big.

If you look at the top of the right corner of the picture, you'll see what's left of the tree stump. It's only a splinter left. 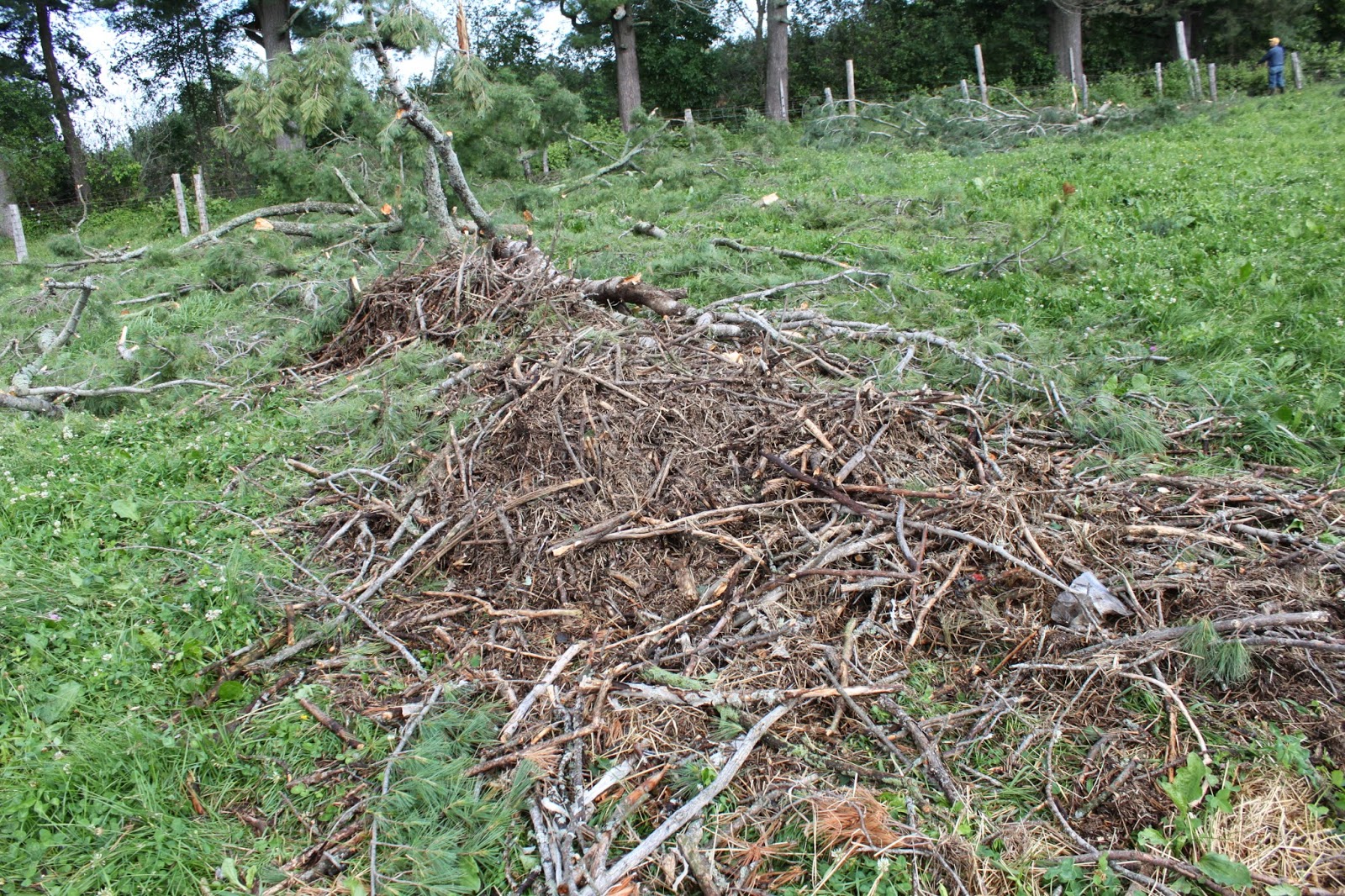 You can see George by the fence in the upper right corner. It might give you a bit of perspective. 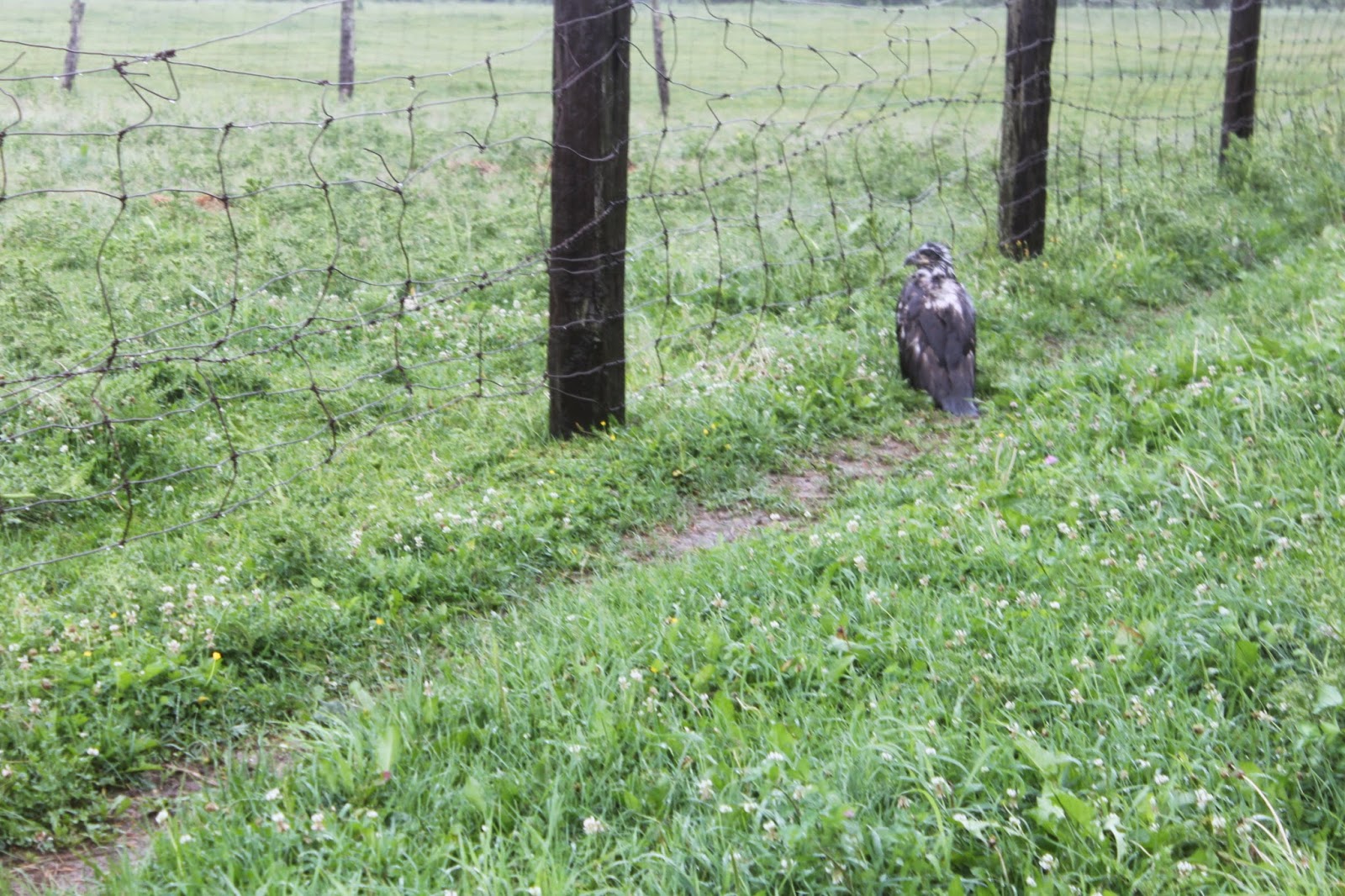 This is one of the baby eagle. It was raining hard and the wind was blowing hard so it's not a great picture. 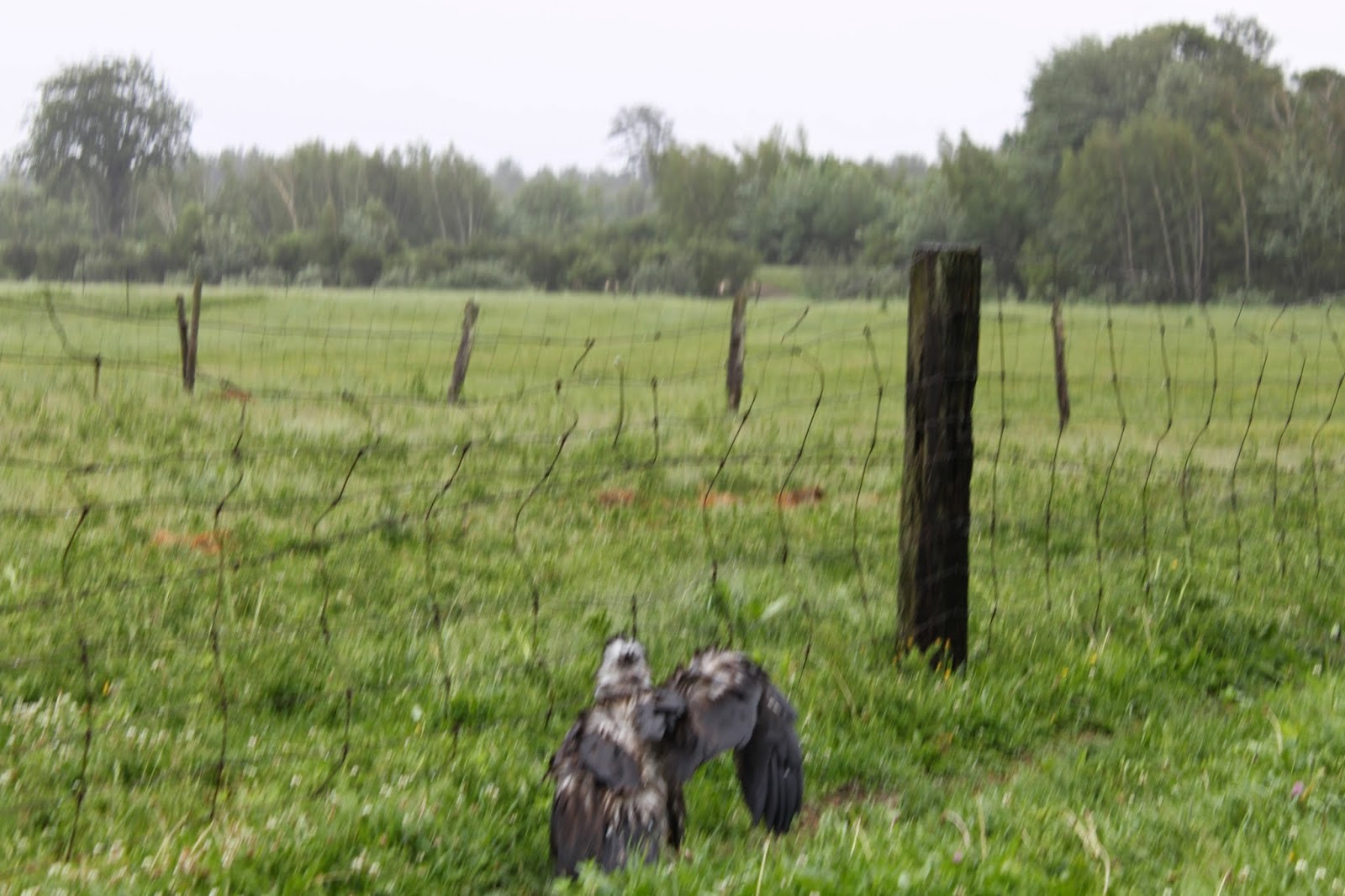 Here I was about 5 feet from him and he was hopping with a bent wing.  I had my big lens on and somehow it got to the wrong setting to focus and I wasn't thinking of how to set it right.  It was raining pretty hard and I was also trying to keep the rain from hitting my lens. I missed some real good shots. 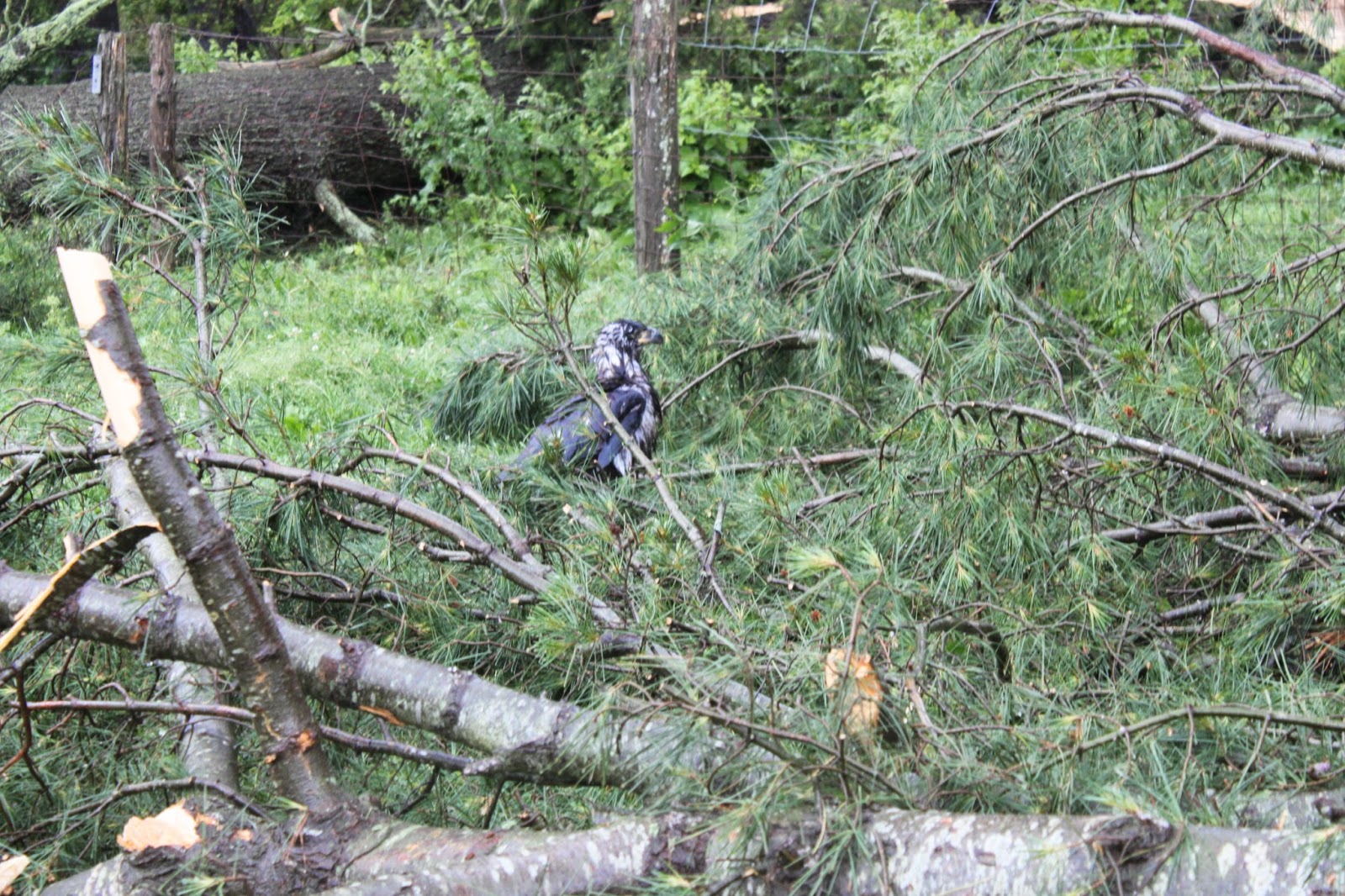 This is the other baby eagle near the fallen tree. He's all wet and looked a bit stunned. 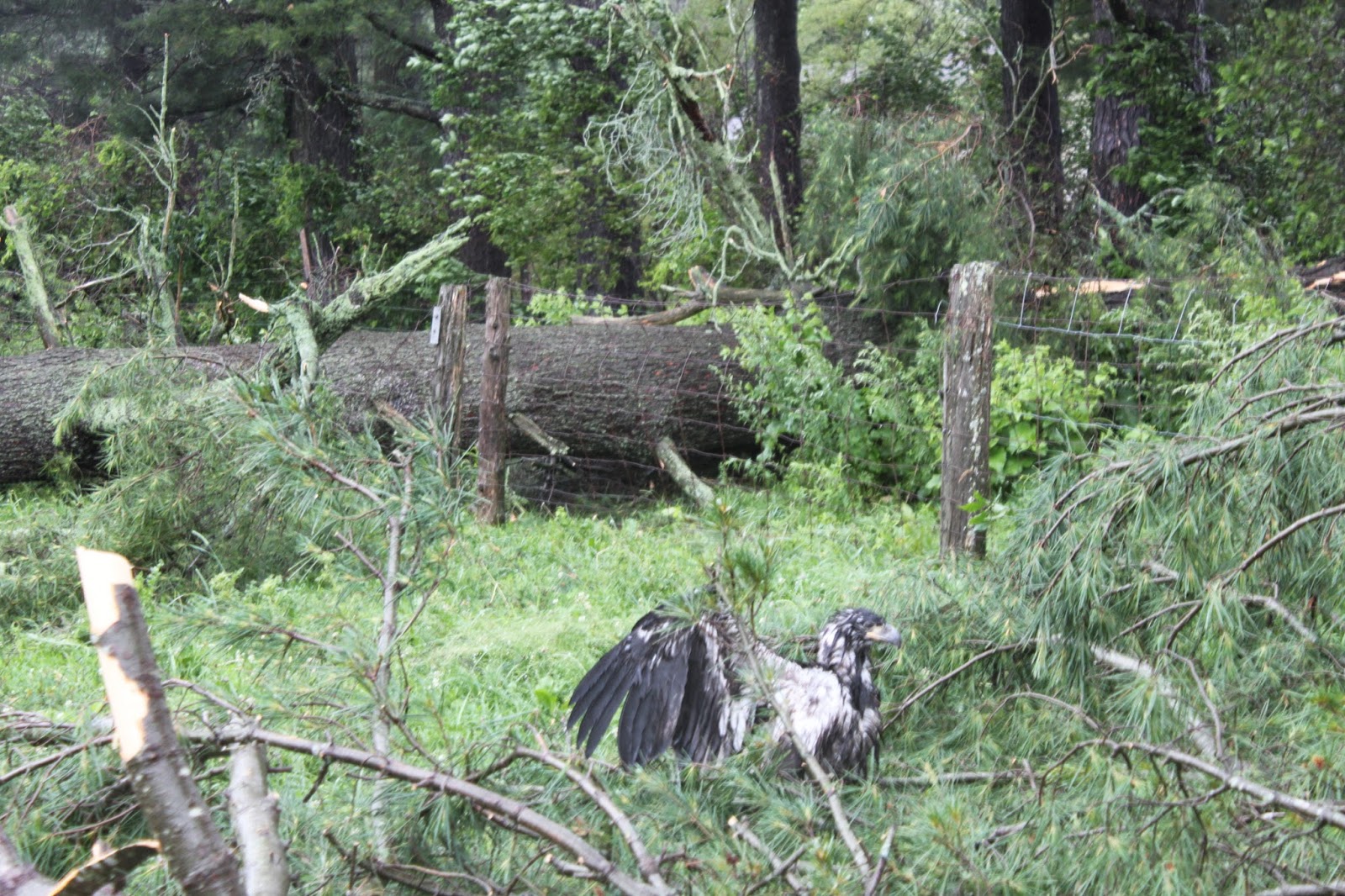 As I got closer he lifted both his wings  and  I  decided to leave them alone. Nothing I could do. 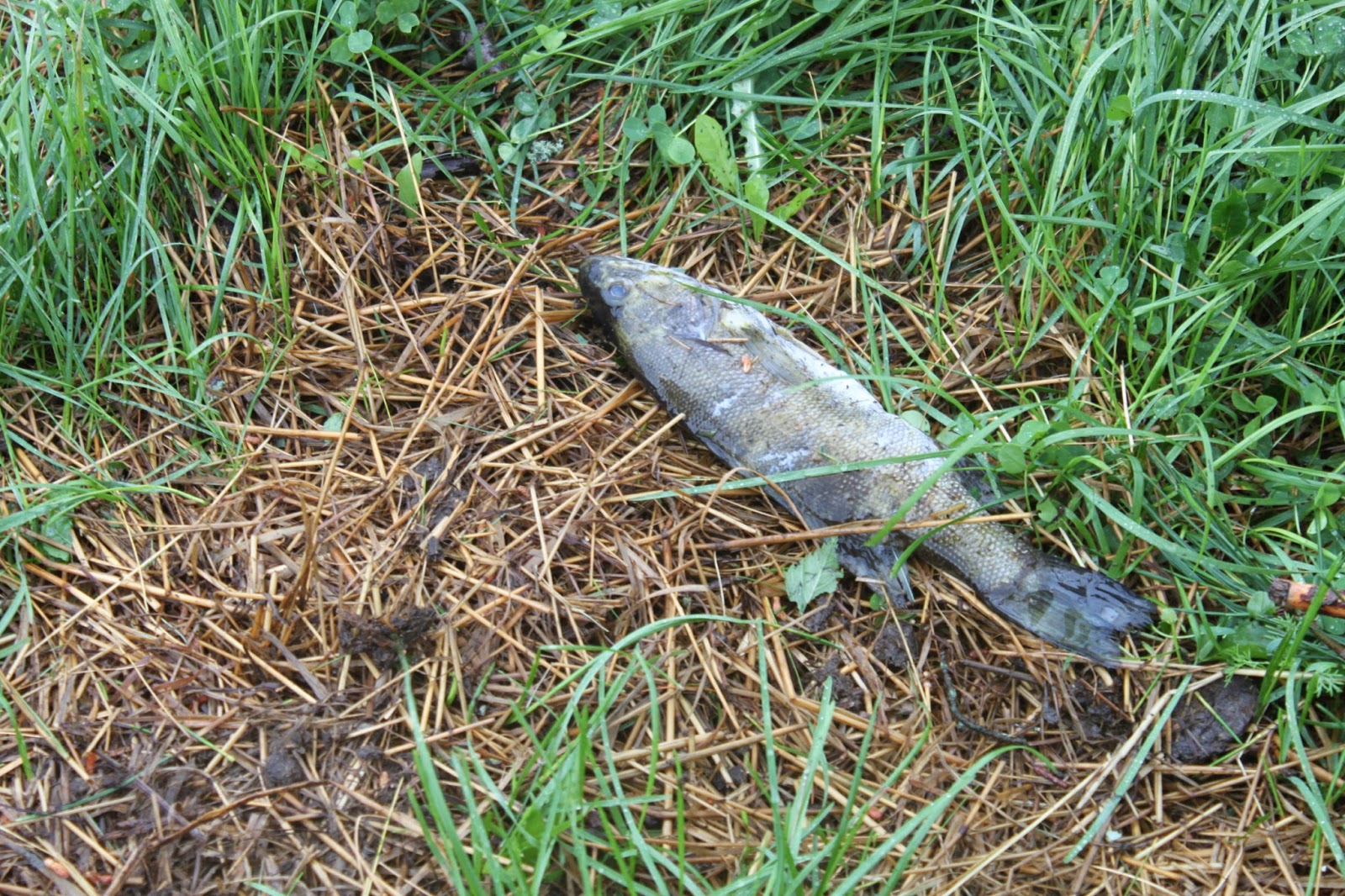 Here is the gasperau fish that one of the parents had brought them. It just laid there near the demolished nest. I felt so very sad for them. My heart was in my throat. I can't imagine how it must have been, being hit with such high wind and rain and flying leaves and coming down with such force. They must have been dazed. 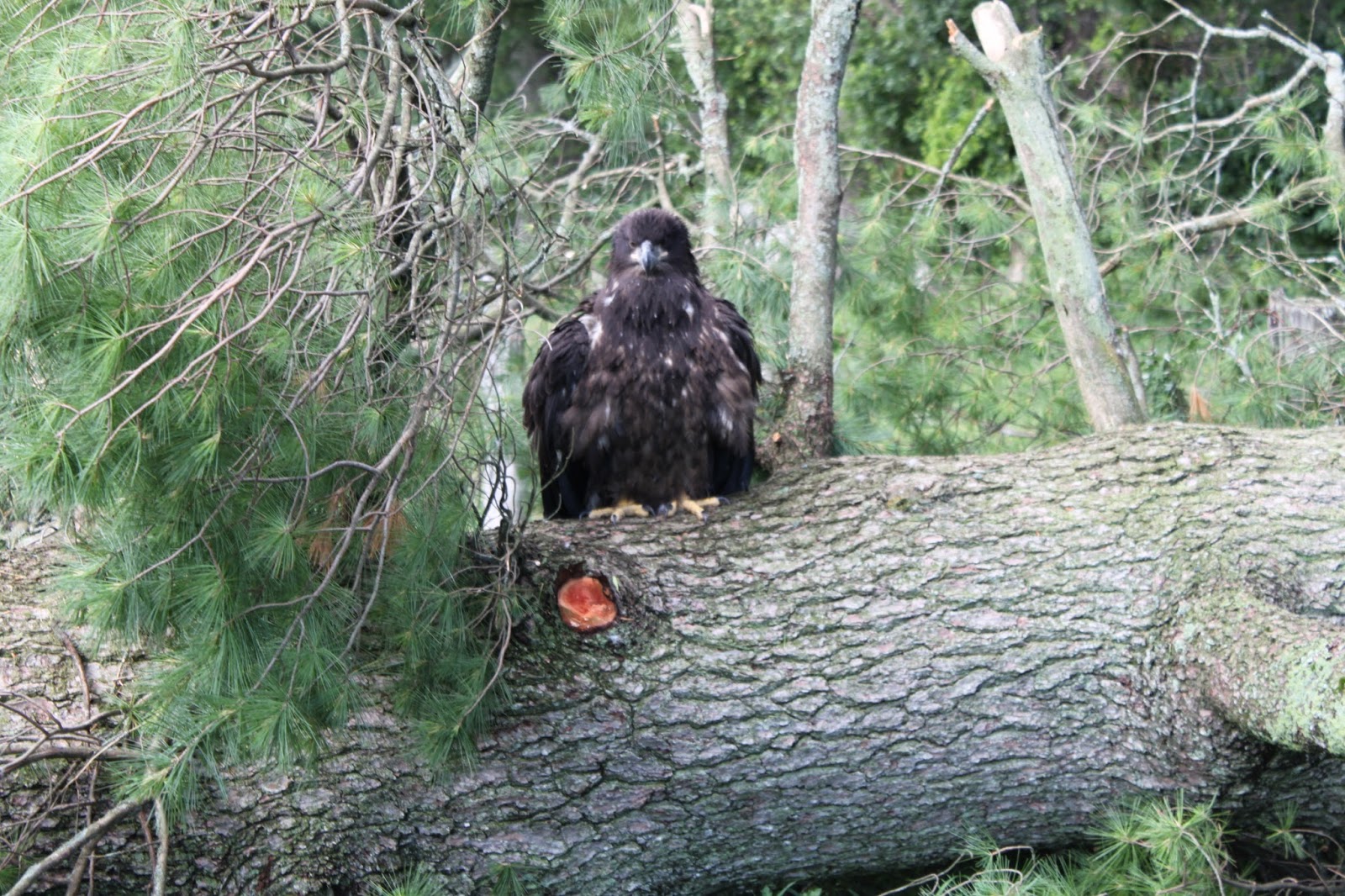 The next morning George and I went back to check on the babies and only could find one. We didn't hang around too long as one of the parents was circling around but I got close enough to this one who stayed close to the fallen tree. He looked dry and healthy. 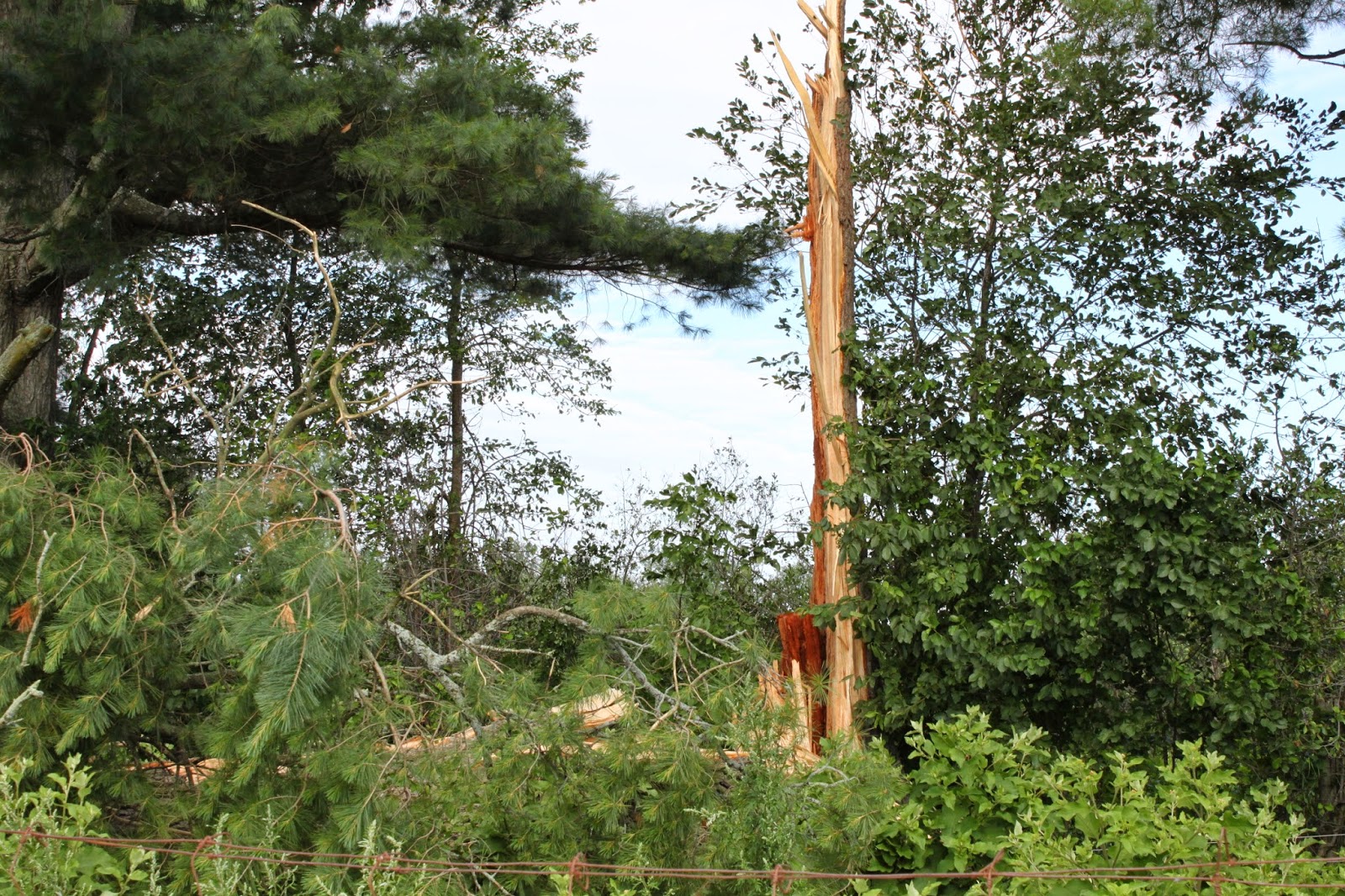 This is a better shot of what's left of their tree.

This is my first instalment on the ravage of hurricane Arthur, the bad boy... More photos and stories to follow.

Stay safe and enjoy the sunshine.
Thanks for your visit.
JB
Posted by Julia at 11:37 PM 25 comments