THE DANDELIONS ARE WINNING THE WAR

I've been pulling dandelions off my back lawn every year and the seeds gets scattered in the wind from somewhere else and they come back every year. They are beautiful but they get into my flowerbeds and that's the only problem I have with them.

I've eaten dandelions before and they are tasty, as long as there is no pesticide on them. I've even had dandelion wine that my husband made one year. It was pretty potent though...

After supper, my husband and I picked  a wheelbarrow full of dandelions using pitch forks. 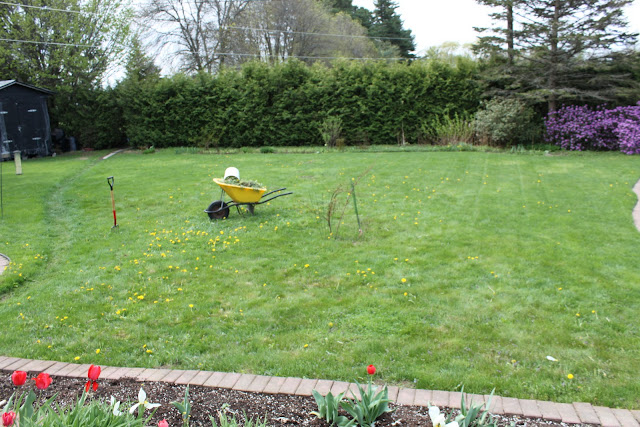 You can see that the lawn got really tramped on. We picked another wheelbarrow full  today.

Can you see the little rose bush growing on the lawn on the right of the wheelbarrow in the top photo?
I dug around it today and weeded and fertilized it and added a border. It a John Davis rose bush that I planted a couple of years ago in honor of my dad who died in 2008 and at the same time I also planted one in honor of my mom who died in 2009. 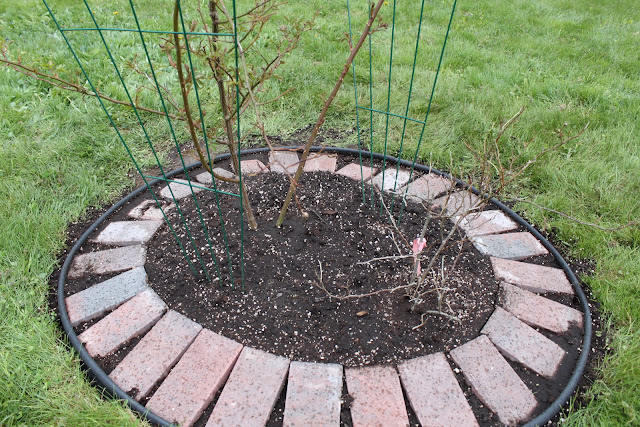 The rose bush was planted on the right and the next year, a branch grew on the lawn a couple of feet away. The original bush isn't doing well but I left it there anyway.  It has some buds on it although some branches are dead. 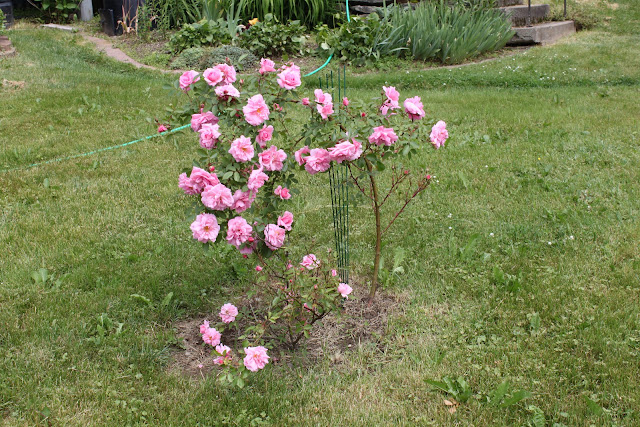 This is what it looked like last year. My lawn needs some lime. We think that the big flood leached the lime  out and the PH is low. The same thing happened in the fields. It was tested before the flood and after the flood, the PH was lower. 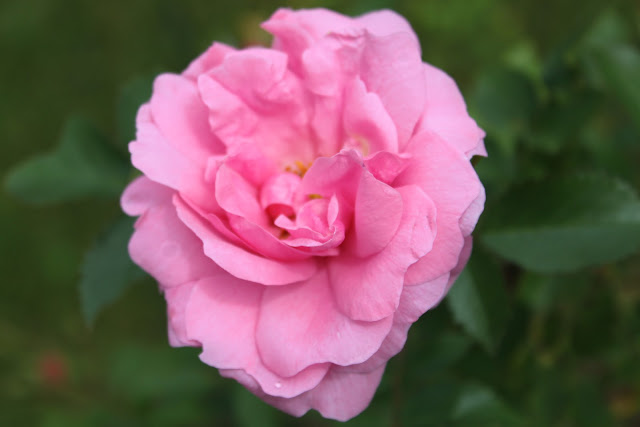 Here is the John Davis rose. They bloom all summer.
I'll stop for tonight and wish you all a good night sleep.

Thanks for your visit.
JB

IN MY CRAZY WORLD LIFE IS NEVER BORING

There is always plenty of adventures in my daily life but I find if I don't write about it, it's quickly forgotten. I'm not good at remembering things unless I write them down.

A flood in the barn

Last Tuesday, May 7th, after finishing work in the evening I came home to make supper. My husband was a little late and he came home with the news that one of the heifers in the back had pulled the float right out of the big watering trough that they drink from  and that there was a flood in the alleyway between the older calves and the big bull pen and the calving pen. He said that there were about 2 inches of water on the floor.

I'm an action girl and I wanted to go clean it up right away. My husband is a procrastinator like my son and wanted to wait till morning. My concern was for the calves but he said that the water was not in the calf pens, just in the alleyway.  Their pens had been cleaned up and fresh bedding applied that morning. It's a good thing that the pen were built higher than the alleyway.

When I arrived the next  morning, there was a big water pool with about 4 inches of water in the alleyway. I got my Shop-Vac and  sucked up about 2 inches of water from the pool and carried buckets after buckets  of dirty water outdoor and when my son arrived later he brought in the skid-steer with the big bucket and filled it with the water and it went much faster. The floor was all cleaned up and dried up in no time. All I could think was all that manure tea I was throwing out could have been put on the gardens as everything was so dry for lack of rain.

While I was vacuuming water, my son and my husband were trying to rescue a weak cow that had gotten herself caught in her stanchion stall. When she went to get up, her front legs were too weak to carry her weight and she plunged forward with her face against the wall and no way could she get herself up.  She was good and stuck. They had to twitch her out, whatever that means... That was a tricky thing to do with a huge animal. She was brought limping in the calving pen to be treated and get some tender loving care and pain killer.

Squash Fiasco at the farm 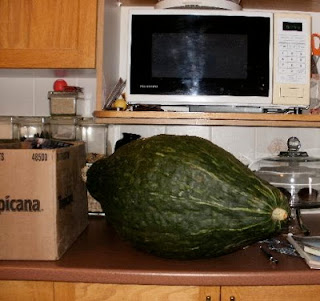 A photo of a Hubbard Squash that my husband gave to my daughter Christine a few years back.


My husband had planted about 65 pots of squash seeds for the church supper  the night before as we have been  providing  the squash for the church suppers for years. He has a lean-to shelter that has a plastic roof  in the back of the barn and the sun shine in there so he thought that it would be a great place to grow the seeds. He has always gotten the nursery to start the squash plants for us but this year, he thought that he wanted to start them himself.

He came back home with a wheelbarrow full of his precious potted seeds all messed up. The raccoons got into his pots and ate all the seeds that he planted. He had planted  three seeds per pot.
He put back the soil in the pots and put some more seeds in and put the pots on the deck in the back of our house. I hope that they will grow, it's still early...

Almost had another fiasco

Wednesday, May 8th, I had a bone density scan appointment at the hospital that had been rescheduled because I miss my last appointment because I had to help George pull that huge calf and I totally forgot about the scheduled appointment that morning.

I left the house early with plenty of time to go down town to make a bank deposit for the farm, go across the river to make a deposit at my credit Union, get some potting soil for my flowerbeds  at the feed store and  pick up a gallon of paint  up town at Canadian Tires for my deck rails. I looked at my watch and saw that I had still plenty of time to run up to Value Village. I thought that I was really efficient that morning.

I found a big crockpot that I have been wanting as my old one is way too small for a roast, I also found two nice pairs of short and I was on my way to the fitting rooms to try on the shorts when a man approached me and ask me if I was Julia. I recognized him right away and gave him a big hug.

He was a refugee from Albania whom our church and our small group of volunteers had sponsored in 1999 because of  the war in Kosovo and Albania. He came to Canada with his wife, son and daughter with absolutely nothing as all their possessions were taken from them. His house was blown up in front of them, his car, jewellery, money, everything was taken away from them  except the cloths on their back. It's a long story.....

His wife was also at Value Village and we hugged when we saw each others.
We talked for a while and I told them that I had an appointment at 12:30. I looked at my watch and saw that I still had plenty of time. He wanted to go for coffee so we could talk some more but I had to go try my shorts on first and pay for my purchase.

I got in the fitting room and took the cell phone out of my pocket to check the time and I nearly had a bird right there. It said 12:18PM., not 11: 18...  My appointment was at 12:30 and I couldn't possibly miss this appointment again . I pull my sweat pants back on ( I only wear them for bone scan as they don't allow pants with zippers for scanning) and I ran to the closest cashier and asked if she would hold my merchandize until I came back. She would hold it for only an hour and got my name and phone number.
I dashed out the door, ran to the car and made it to my appointment at the hospital right on time. I didn't had time to go back to explain my sudden exit to my Albanian friends. I felt real bad but I did what I had to do.

That morning  I wore my good watch that I hadn't worn since I was in Ottawa, then I remembered the hour difference. I never adjusted the time on my watch when I got back home and my watch was put in my jewelry box as I use mostly my cell phone to check the time.   Duh...

This afternoon, when I went in the barn, I saw a black kitten who had an eye infection. I had tried to catch him  in the morning to clean his eyes and put some drops in them but he went and hid from me.

As I bent to grab him he started to meow really loud and the mother cat was near by, she came and attacked me in the face with her claws. She  hissed loudly and slapped me twice quickly and I screamed at her and she stopped but she had already pierced my skin in 5 places places. She pierced my nostril right through but I'm not going to wear a stud..., it just wouldn't sound right that I got my nose pierced by an angry cat, ha,ha,ha.

There were no scratches, just piercing  and I was bleeding. I let go of the kitten  and walk to the storage fridge to get the rubbing alcohol and a paper towel and I bathed the wounds. I put some Polysporin on. It hurt like hell. I may have to get a Tetanus shot tomorrow, I'll see how it feels in the morning. Stupid barn cats.

That is enough adventures for today. Sorry my post is so long but  I have to log my adventures or they will be forgotten.