FEELING OLD AND IT'S NOT MY BIRTHDAY YET

This week has been a little rough on my back. I've been walking like a bent old lady. We were short handed and cows were calving and I needed to have clean calf pens ready for them. Last week I was clipping the fir hedge in between rain storms and left the dirty calf bed to be cleaned until this week.

Just because I ignored that yucky chore to get that other job finished first didn't make it go away.  I cleaned 4 calf pens and the packed soil bedding was about a food deep and it's super heavy work for a petite girl like me. The other one was about 4 inches deep of loose hay bedding. I started after feeding the calves in the morning and finished around 3:45 pm. I went home for a late lunch and went back feeding the calves again. 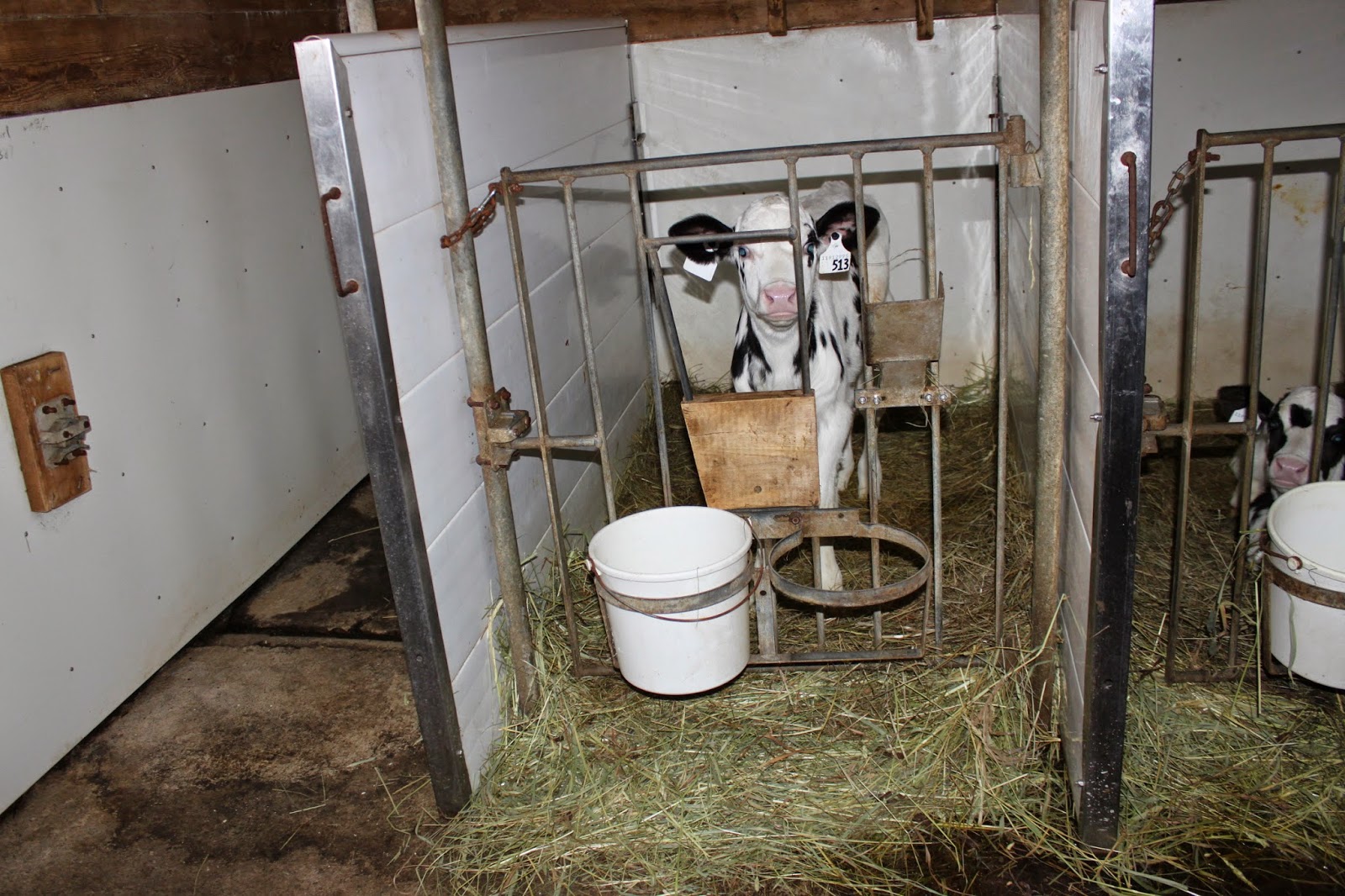 513 was the only calf wanting to pose for the camera. Her name is Sally and she was named after a very friendly bank teller by my son Vaughan on the occasion of her birthday. 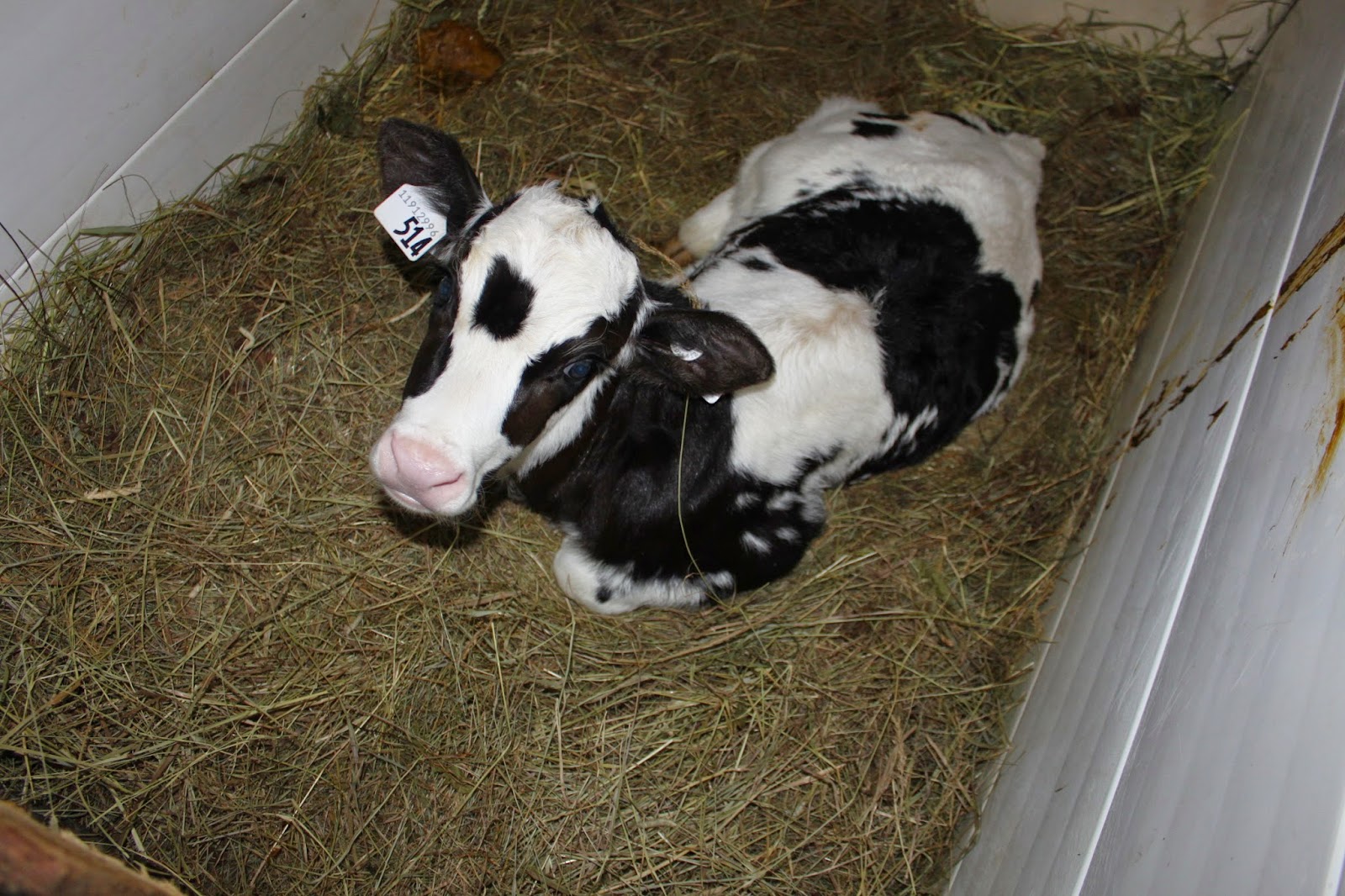 514 wasn't feeling well yesterday but was feeling better this morning but couldn't care less for getting up for a picture. Her name is Nova. That little starburst on her head is black rather than white light but that's OK.  Nova has already decorated her wall. 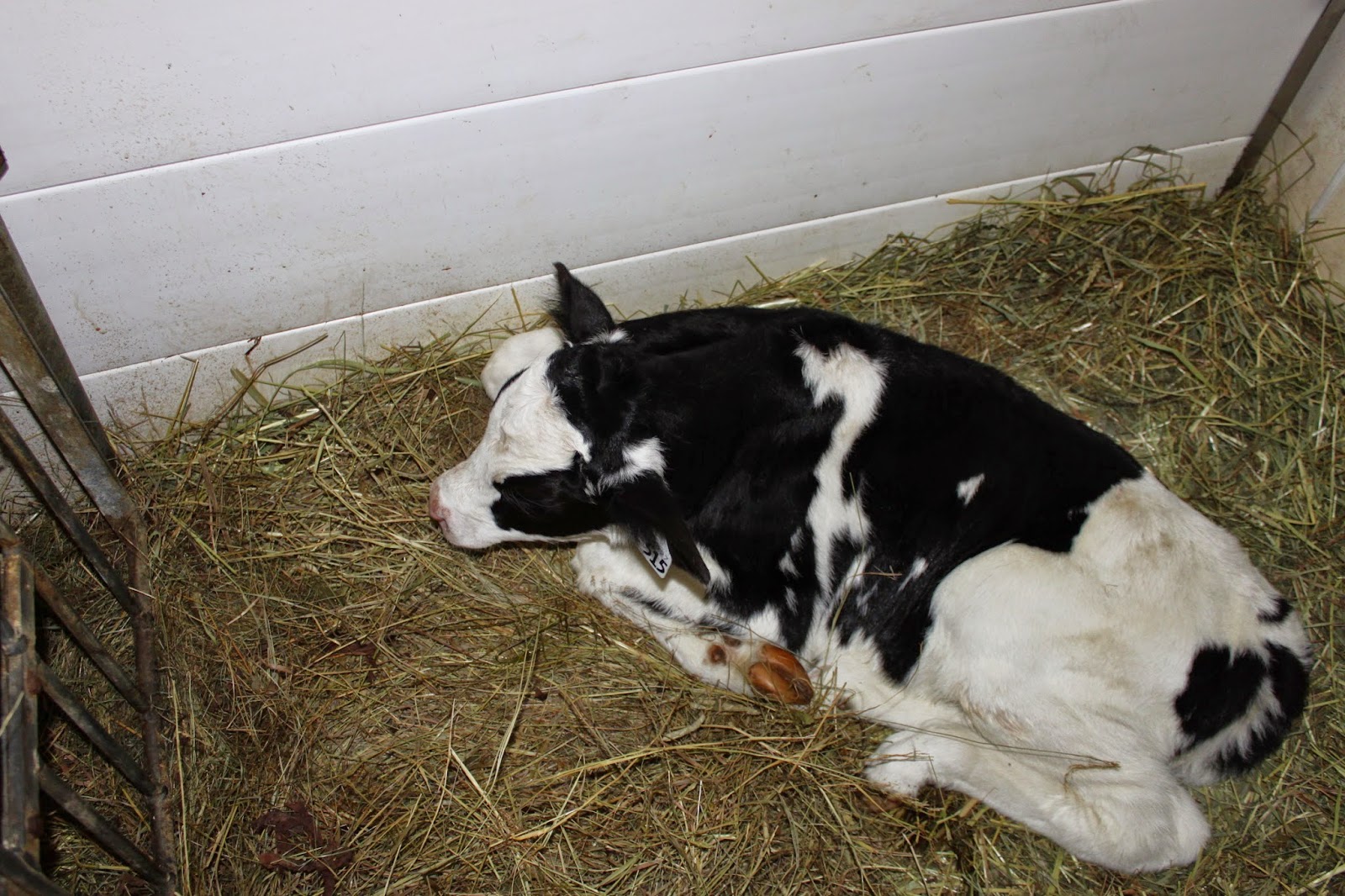 #515  is named Salsa because my daughter Nicole informed me that her and her friend were going to take Salsa dance lesson although they will be laughing more than dancing. I'd love to see them learning the Salsa, hehehe...

Continuing my story:
The next day I really felt the strong back muscle spasms. I still needed to scrub and disinfect the 5 pens and prepare the bedding for the new calves. It took me longer also to do this job as I was moving pretty slow but it had to be done as we had to move another cow in the birthing pen for yet another calf.

As I enter the barn after a 2 hour lunch break to rest my back, I checked the cow and she was laying down and the calf looked lifeless.  The calf still wasn't fully out and was not breathing.  I had a pair of thin knitted gloves on  and I didn't had time to put the nitrile gloves over them. I went in the pen and grabbed his head and stuck my finger in his slimy nostril... yes I know it's gross but glory be,  the calf took it's first breath and I breathed a sigh of relief too.....

In my panic to save the calf I didn't even look how big it was. I grabbed the front legs and pulled it out of the mother and dragged it a few feet so she would get up to lick her calf. The mother wouldn't get up.   It was another heifer calf.  My son Vaughan arrive as I was pulling the calf to a safer spot.  He said, Mom, that's a big calf....

I vaccinated the calf and dipped the navel in iodine and Vaughan gave the calf an  injection of vitamin in the muscle.

The mother was exhausted and wouldn't getup  but after poking her a few times she got up and cleaned her calf. After, Vaughan treated with  Calcium under the hide.

Yesterday we had herd health and also vaccination for everyone of our cattle.

It had been another very busy day again but last night George and I went out to a Country and Western fund raiser evening at our church and our priest played guitar and sang some Charlie Pride songs. What a beautiful voice he has. We had a chuck wagon stew, homemade beans and apple desert. No supper to prepare and no dishes to clean. There was so much talent in the performers. Everyone was clapping and tapping toes.

The stage was all decorated in a barn  style. There was small hay bales, wagon wheel, and farm implements  and they even borrowed some of our hay forks for decoration and I didn't had my camera with me. It felt like I had been in the barn from morning till night. lol...

I managed to transfer my grandfather rug pattern on backing this week. I also dyed some wool in an attempt at getting different shades of sienna brown  with the dyes I have on hands.  My wool came out all wrinkled...I still need to dye some darker values of sienna brown. I still haven't started hooking yet. 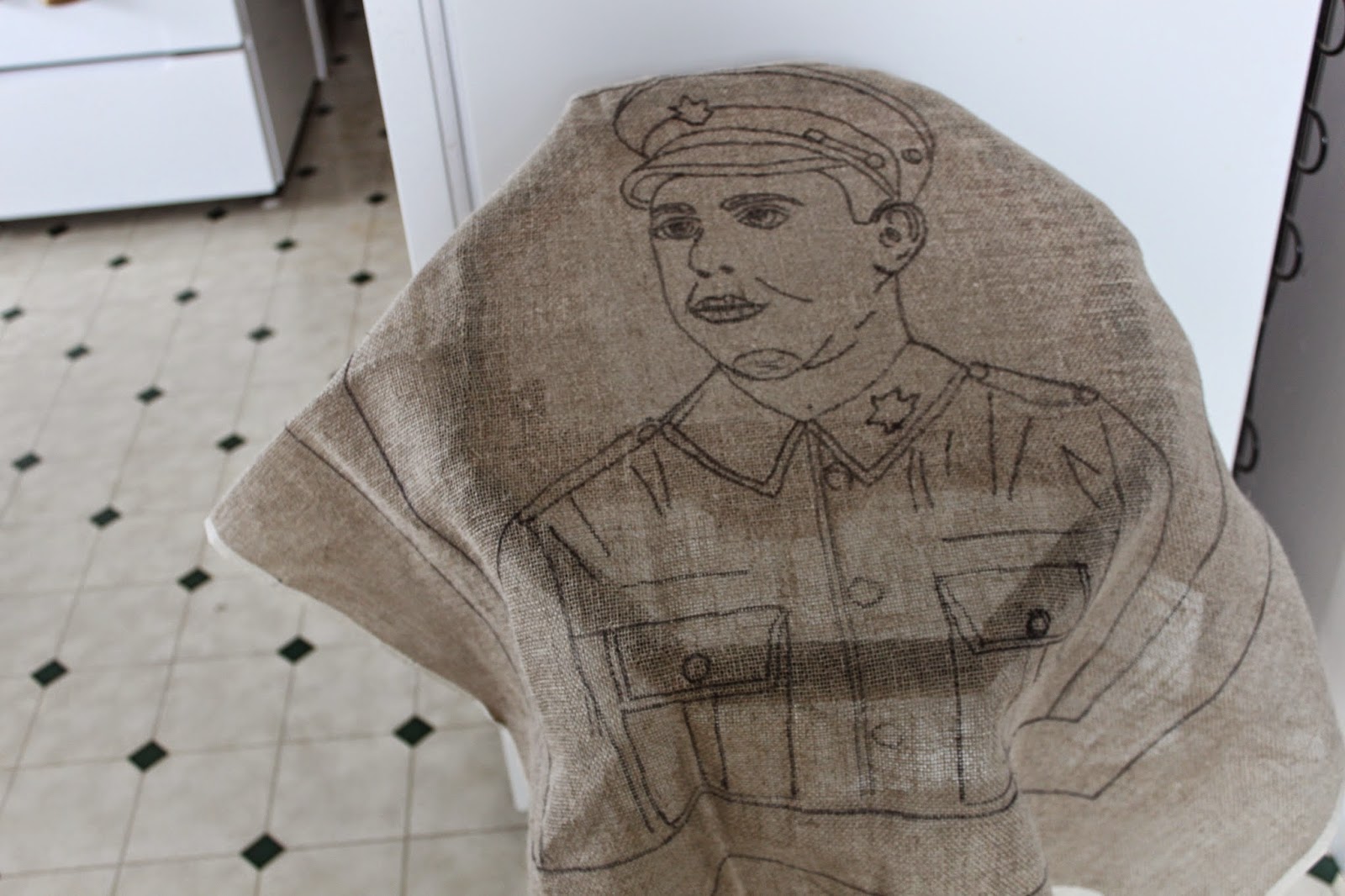 I need to refine the nose as it's thicker than on the photo. 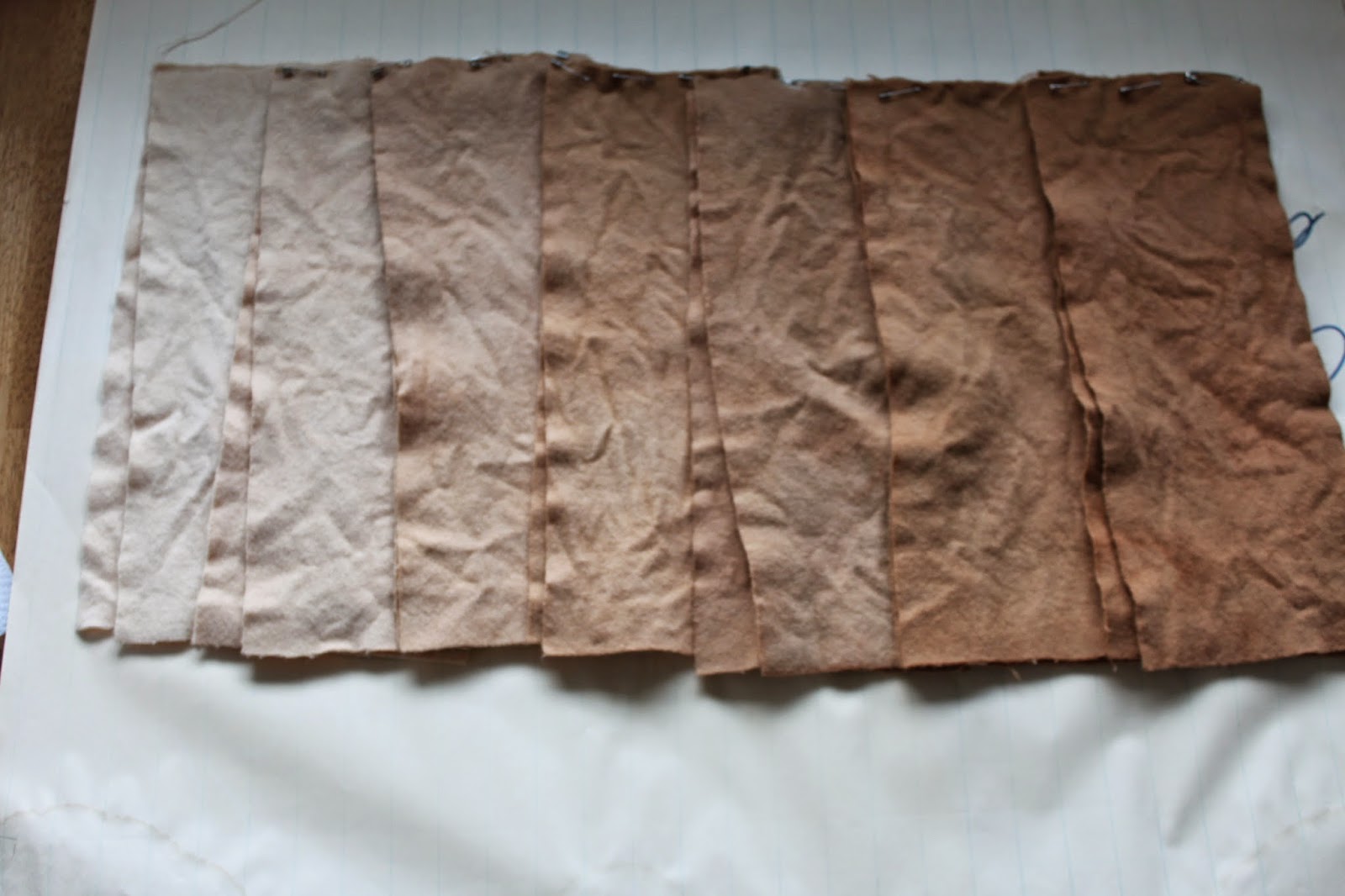 My first attempt at dyeing sienna brown with primary color  dyes I had on hand. It came out very wrinkly.

The sun came out for about 5 minutes . It makes me so happy to see the sun after a miserable week but it went and hid again....

Stay safe and warm and thanks for visiting. I always appreciate it when you leave a comment to show you came for a visit.
JB