THIS IS GOING TO MAKE YOU PEE IN YOUR PANTS...

Well surprise, surprise, I picked up two lovely new followers this weekend and I'm tickled pink.  Karen from the blog Life is what YOU make it, all the way from South Africa, (a small world isn't it), and Cynthia from the blog  Kyrotime. Both of these ladies have wonderful blogs. Welcome to both of you.

Now my story... My vivacious breakfast friend, Anne who is 78, had asked me a while back if I would do her a big favor. She wanted to have a surprise birthday party for a parishioner who was turning 75. Now this gentleman has initiated a monthly Community Breakfast to raise money for the community's special needs, not just for our church members but the whole community of Lincoln, for things like a house fire, cancer, special needs,  church projects  etc. He initiated a soccer field for the youth, painted the church inside, built cupboards,  raised a lot of money for the church auction by donating his service to do renovations two years in a row and many many other projects. How could I say no to my good friend Anne.

The birthday party was Friday evening and we were supposed to all be at the church before he came to work on the community breakfast preparations for the next day. I was told to be there for at least 5:30 PM so I went to work at the barn earlier and got all my work done earlier and as I'm about to go home to shower, my husband called and needed help to bring in a new born calf all the way from the back field.

Dang... that's all I needed .... an unannounced calf.... I helped bring the cow in and he brought the calf. While in the dry cow barn  we also found an aborted calf fetus maybe about 20 inches long. This had to be put in a bag and refrigerated to be brought to the lab for autopsy.  Just what I needed.... More delay.... But when you live on the farm every day is the same but never the same if you know what I mean...

Long story short, I got there late but the guest of honor hadn't arrived yet because he was late himself so it gave me time to find someone who would take pictures with my camera for me.  I had time for a beer with friends.

This party had an Italian theme since he immigrated from Italy many years ago. His story was told with skits acted by parishioners of his arrival to Pier 21 in Halifax and we were treated with  Italian food. There was over a hundred people there. 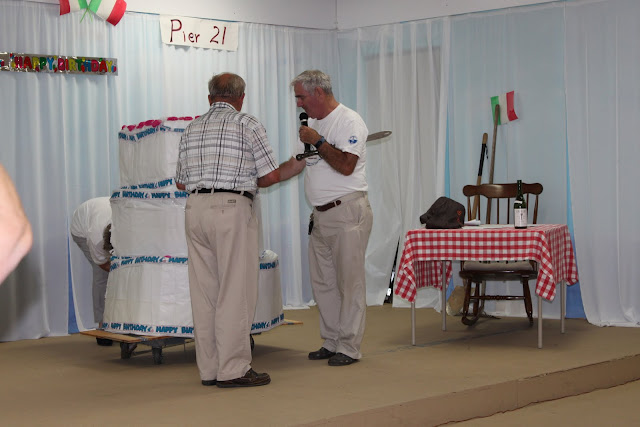 I was asked to jump out of a fake cake. Anne was pushing the flimsy makeshift trolly on stage and the Birthday man was supposed to cut the cake on the count of three which was my signal to jump out of the cake top. 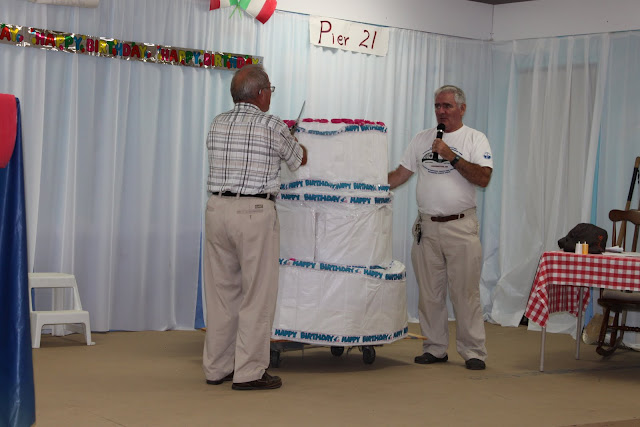 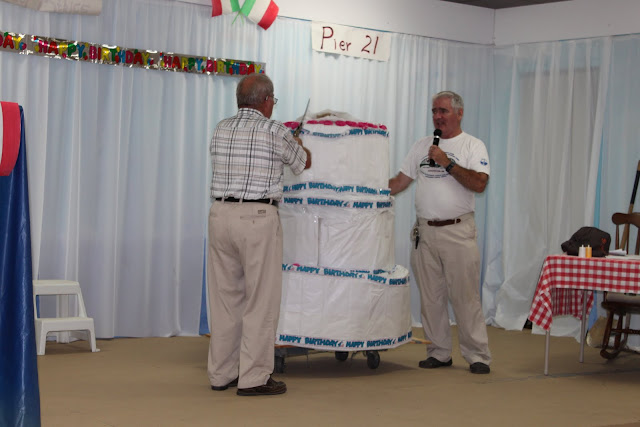 Now see the top of my head poking through the cake. 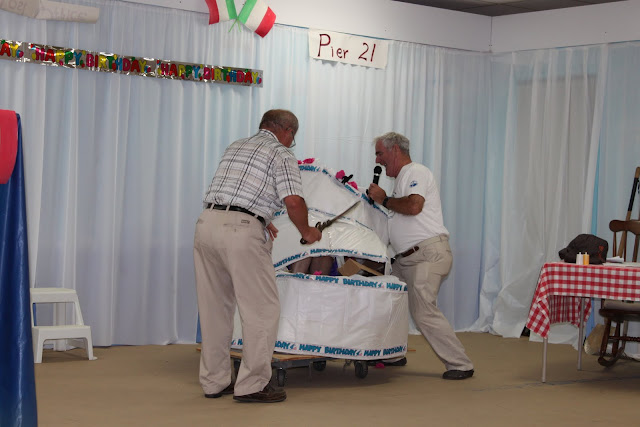 The flimsy cart is not holding well and something goes wrong with the wheels and started to tip.... but not to fear because Anne is in the back to catch my fall. It was like falling on a feather bed. No pain what so ever... 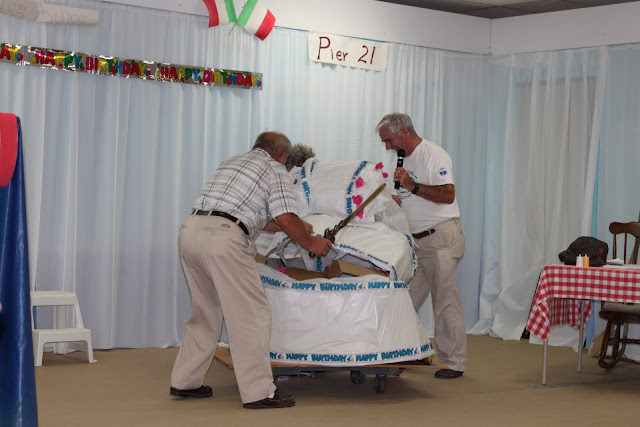 By now the crowd is roaring with laughter.... even the surprised guest and the MC... and cameras are clicking away... 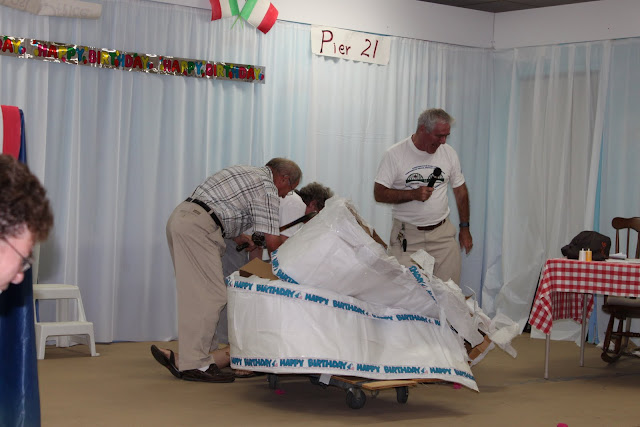 There I am stretched out laughing so hard. And I'm supposed to somehow sing him Happy Birthday. 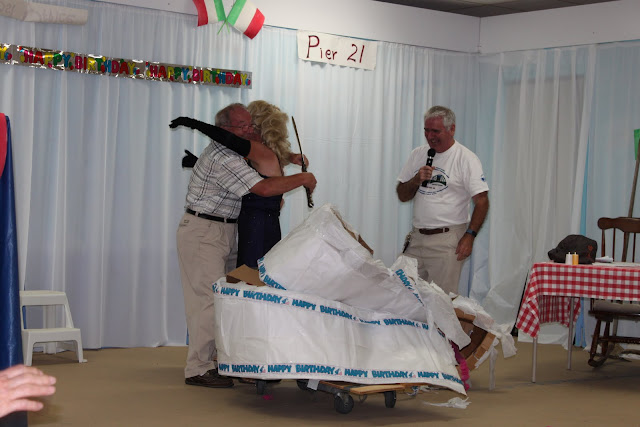 Now would you look at my farmer tan... Anne provided the spaghetti dress, the wig, two assorted black gloves for the same hand, mind you... and the jewelry.  Oh the things I do for my friends... 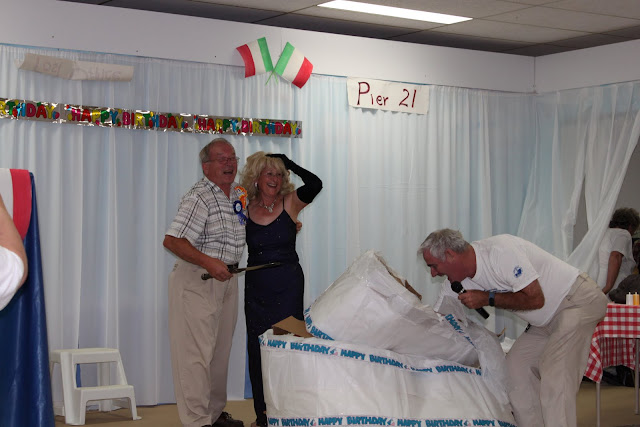 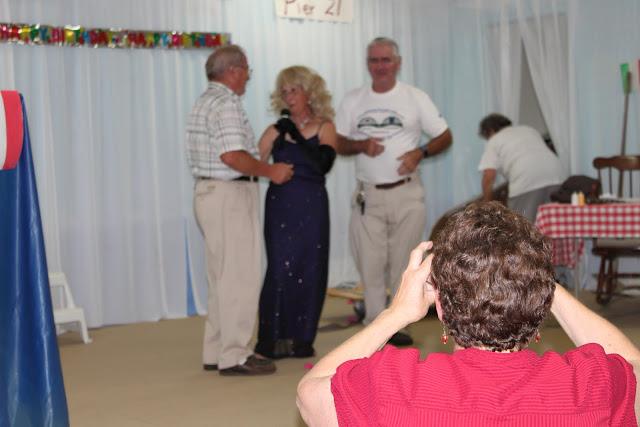 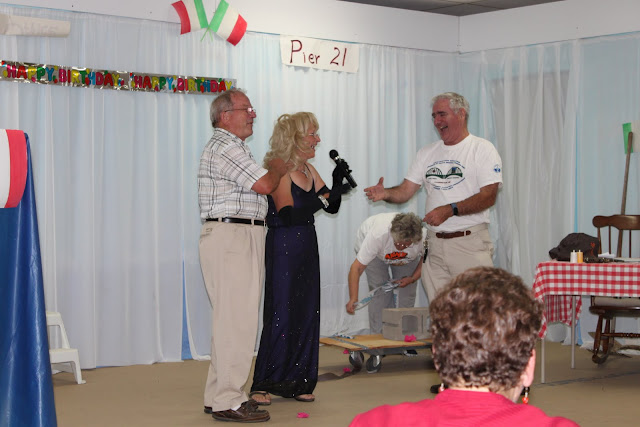 See the cinder block I had to stand on for height. The first time I tried to pop out of the cake there were no cinder block and everything went well and  now look at the wheels. 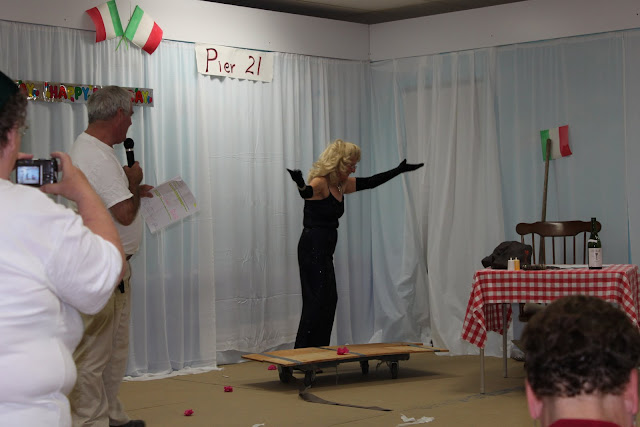 Marilyn exits and the crowd are taking pictures and clapping. What fun and silliness... 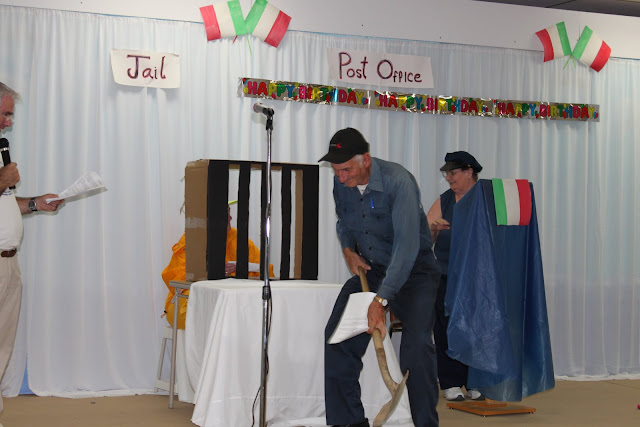 George was part of an act where an old farmer was too old to dig up his garden and his son was in gail and couldn't help him dig up the garden to plant vegetables. The son told the police that there were bodies buried in the garden and George the policeman dug up the whole yard and found nothing and apologized to the farmer and then the son sent a letter to his father telling him that it was the best he could do under the circumstances. The farmer could plant his vegetables after all.  Poor George was late  too and only was given his script at the last minute. 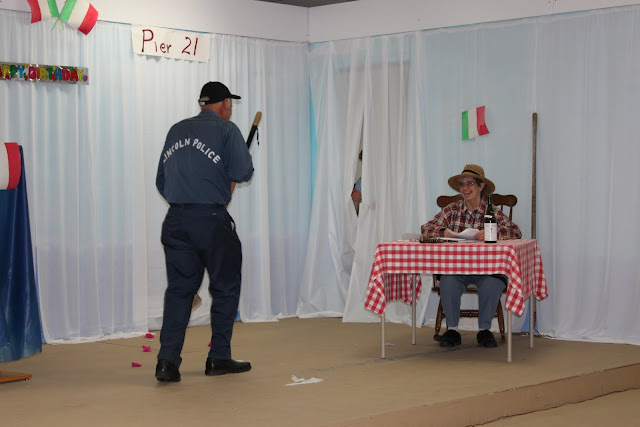 So exit our laughing Lincoln Police.  Notice the old farmer at the table is laughing too.

Sorry for the length of my blog today but I hope that you had a good laugh at my expense.  Thanks for leaving comments.  JB