Today was routine, up early, cup of coffee, healty breakfast, pill, check emails, walk to the farm  for routine work, come back home to prepare lunch, eat, start to wash dishes, noticed a few drops of rain outside. They announced rain on the weather channel. I thought that I better get some fresh tomatoes and cucumbers before it pours as I don't like to go in the garden when it's wet.

I took a large metal bowl and arrived in the garden and again the two baby doves are close together in the garden, I ran back in to fetch my camera and snaped a picture. You get the sence of deja vue. 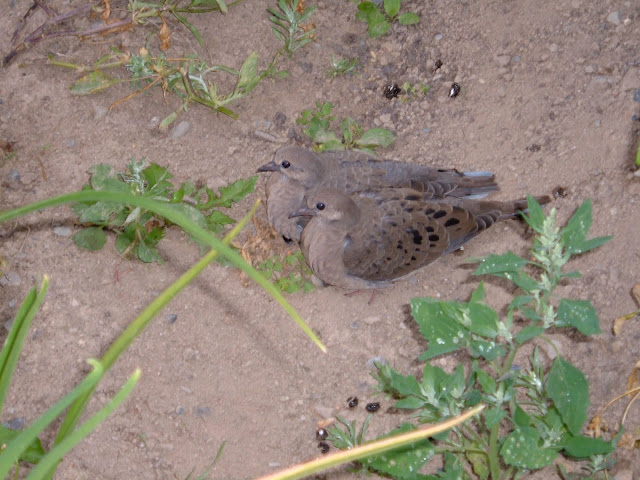 Anyway,  I picked all the larger cucumbers, three boxes in all and all the red tomatos, pulled out all my onions. They are super large this year. I noticed that some of the weeds were quickly going to seed.  That's not good at all... so I started pulling the big ones, and oh yes... the  crab grass in it's full glory and another type of weed with big fat seed pods, a few chick weeds, before I know it, I weeded the whole garden. Still no rain. Two hours later I brought my bounty in and looked at my sink full of dishes still waiting and it's time to go feed the calves and do my chores. I can feel my butts muscles, weeding is good exercise.

After returning from Derrick Miller's concert and  his CD launch tonight, I went to check on my little patient and he not doing good at all. I gave hime his medecine and he only took half of it and his breathing was shallow and he could not get up or keep his head up for very long.  I prayed to St Francis of Assisi, patron saint of animals for help.  JB
Posted by Julia at 11:58 PM 2 comments